Regarding Democracy through Greg Marinovich’s photography

In Susan Sontag’s seminal book, On Photography, Sontag writes that the “industrialisation of camera technology only carried out a promise inherent in photography from its very beginning: to democratise all experiences by translating them into images.” Since the dawn of photography and the development of the first cameras in the early 1840s, taking photographs has been a way of both certifying and refusing experience – memorialising and restating symbolically; limiting reality to a search for the aesthetic. 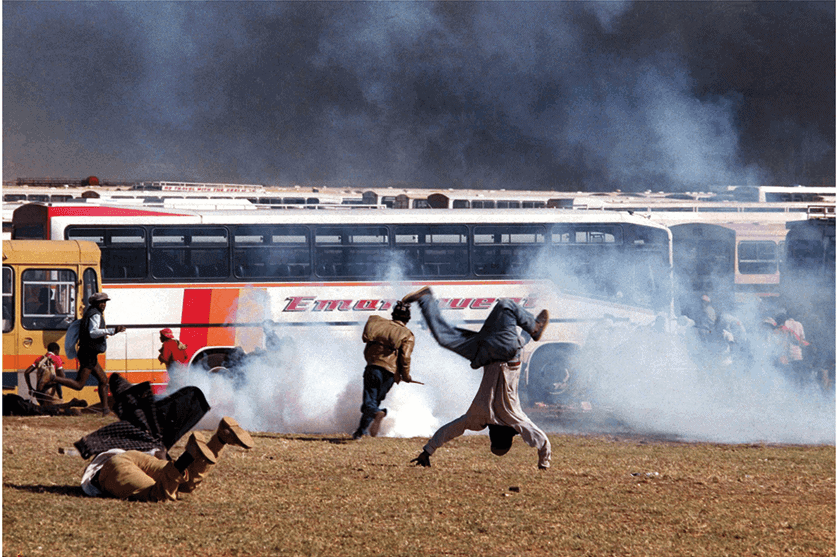 Somersault, Soweto, 1993. African National Congress and Communist Party supporters scatter as police fire teargas and live rounds outside the Soweto soccer stadium where the funeral of ANC and CP leader Chris Hani was attended by hundreds of thousands of mourners on 19 April.

On the 8th May 2019, citizens from across the country lined up to cast their vote in the sixth democratic elections as the Republic of South Africa – seemingly the most important, and most pressured, since the birth of the country’s democracy twenty-five years ago. The African National Congress (ANC) bagged 230 seats in these elections, with President Cyril Ramaphosa stating, in his keynote address, that the people of South Africa have voted for “a country they’d like to see in peace with itself and with the rest of the world”.

It is in this regard, and certainly seems fitting, that one should consider the ability of photographs to democratise all experiences – especially when regarding photojournalist Greg Marinovich’s remarkable portfolio of early 1990s images titled The Dead Zone. 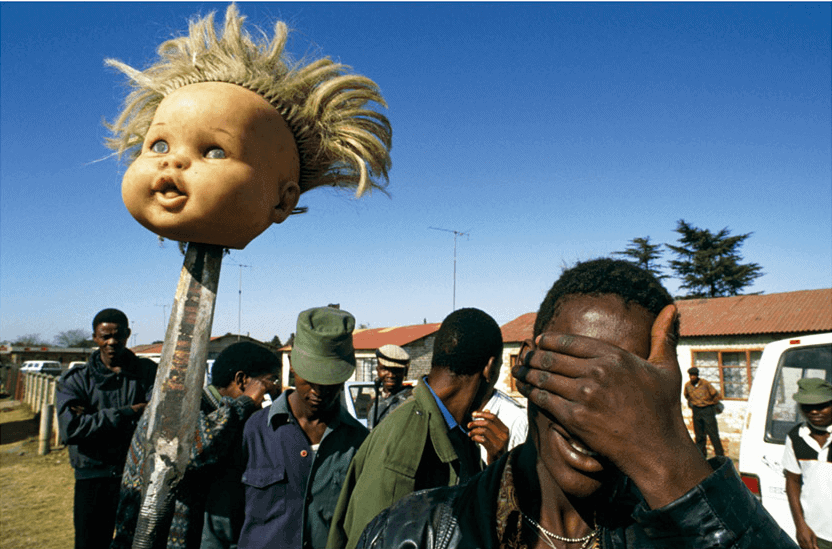 Doll’s Head, Boipatong, 1992. A man holds a white doll’s head on a spear in the angry aftermath of the Boipatong Massacre of June 1992. Forty-five people were killed by Inkatha Freedom Party members, allegedly supported by police, which nearly derailed the negotiations towards a democratic solution to South Africa’s dilemma.

One image in particular – Doll’s Head, Boipatong, 1992 sees a black man covering his eyes with his left hand. The man’s right hand, presumably, is holding a spear upon which a white-‘skinned’ doll’s head is skewered. A caption belonging to the image tells us that the photograph was taken in the aftermath of the Boipatong Massacre in June 1992 – where “forty-five people were killed by Inkatha Freedom Party members, allegedly supported by police, which nearly derailed the negotiations towards a democratic solution to South Africa’s dilemma”. Yet this image speaks directly to a certain ‘white paranoia’ – one reminiscent of an Anton Kannemeyer Alphabet of Democracy print – and picks up on prejudices both rife historically, and those that remain to this day. Although not quite a human head impaled, the visual tropes captured here are inherently violent, and spark an immediate sense of fear: if this is what can be done to a doll, imagine what can be done to a living being. Photographs can and do distress. Incongruously, however, this was not a war being fought against white South Africans.

Archbishop Desmond Tutu wrote in the foreword to Marinovich and Silva’s The Bang-Bang Club, Snapshots from a Hidden War that “Nearly everybody made the direst predictions about where South Africa was headed”, and recollects that these predictions seemed well on their way to becoming true when violence broke out during the transition from “repression to freedom, totalitarian rule to democracy”. Tutu goes on to explain that the volatile pre-election period was “designed to fill township dwellers with panic and to get them saying that the ANC was unable to protect its members”. It was this fear, this frustration, this anger – caused by the Boipatong Massacre, and the 122 other massacres between 1990 and 1992 (Marinovich only learnt of the 110 additional massacres from a Truth and Reconciliation report almost two decades after he photographed 12 of these war zones) – that led to Marinovich capturing The Dead Zone images, and in turn, led to a wider audience viewing, and knowing of, South Africa’s horrors. The man in Doll’s Head, Boipatong, 1992 is defiant against this massacre, defiant against the lens; his image a symbol restating the terms upon which South Africa’s democracy would be decided – and when viewing this image twenty-seven years later, one is given a sense of imaginary possession, of immense relief, over a past that is unreal. 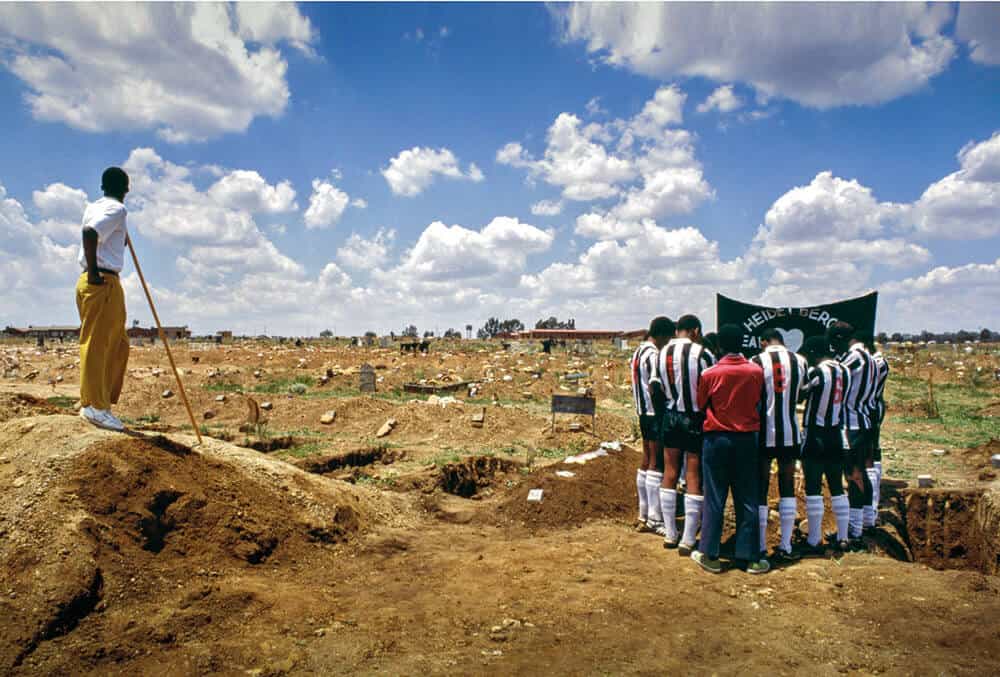 Soccer Grave, Ratanda, 1993. A football team buries their team-mate who was killed in crossfire between ANC and IFP fighters while playing soccer in Heidelberg’s Ratanda Township. The political rivalry in Ratanda combined with politically aligned unions vying for jobs in local meat-processing factories resulted in several people being killed in confrontations.

In Ashraf Jamal’s book In the World, he references the South African poet, Stephen Watson, in an essay on painter Kate Gottgens. When referring to poetry, Jamal writes, Watson posited that “It taught [him] through many examples that the aesthetic, whilst it might appear as an evasion of all that our age demands, was also one way of keeping a check on our more active commitments. It afforded a perspective, often defiantly ironical, for which there really was no substitute.” Perhaps photography became Marinovich’s ‘poetry’ – an aesthetic through which he could coax the ethical in a time “consumed by the dogmatically political”, in turn, afflict the eye towards the necessity of democracy.

Placed alongside War Potion, Kwamashu, 1994, we read that what we are seeing is an image of “an Inkatha Freedom Party member [spraying] inthelezi or war potion over warriors before a march through the volatile KwaMashu township, north of Durban, that was divided between Inkatha Freedom Party and African National Congress supporters”. This photograph is almost cinematic in its aesthetic, and arguably makes of its viewers tourists of reality. For a moment, one forgets that it was a photographer who captured this image; that this was not a staged event – reality limited to a search for the visually appealing. Inevitably, Marinovich, too, was blessed with invulnerability by the inthelezi. 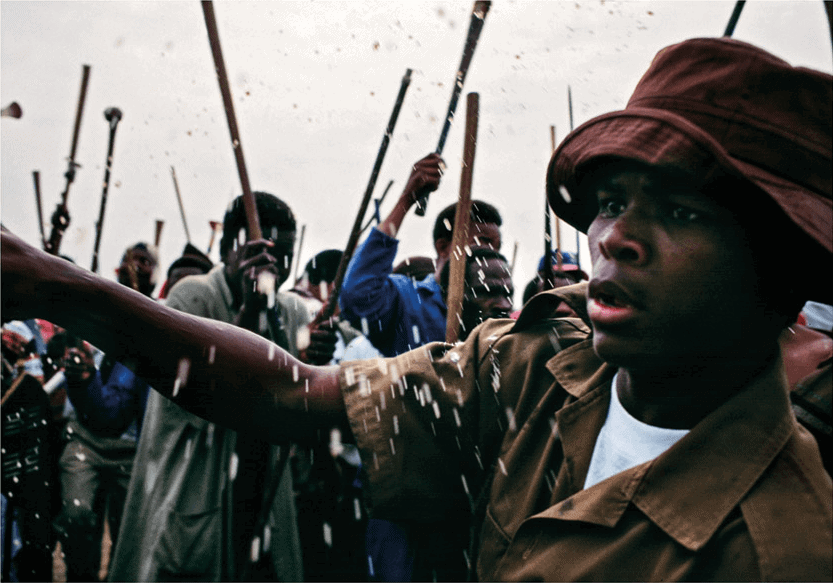 Sontag argues that the “aestheticizing tendency of photography is such that the medium which conveys distress ends by neutralising it”. She goes on to explain that as much as photographs create sympathy, they also reduce sympathy and distance emotions: “Photography’s realism creates a confusion about the real which is (in the long run) analgesic morally as well as (both in the long and in the short run) sensorially stimulating.” In its ability to both incite and distance emotion, as well as afford a perspective for which there is no substitute – photography, and in particular The Dead Zone, clears our eyes; provides us with a fresh vision.

Six democratic elections on, Marinovich’s images have both documented and memorialised the explosive run-up to 1994, and made these experiences accessible to all. And while it certainly is a past that is unreal, when viewing these images, one does not feel as if they numb the pain of this tumultuous past. Rather, The Dead Zone allows for us to take possession of a space and history over which we feel insecure, and serves as a tool for remembering why South Africans have voted to become a country finally at peace with itself. As Sean O’Toole writes in his account of Marinovich’s photographs, this portfolio “offers an idea of what it means for a nation – as much as a committed news photographer – to come through slaughter”. 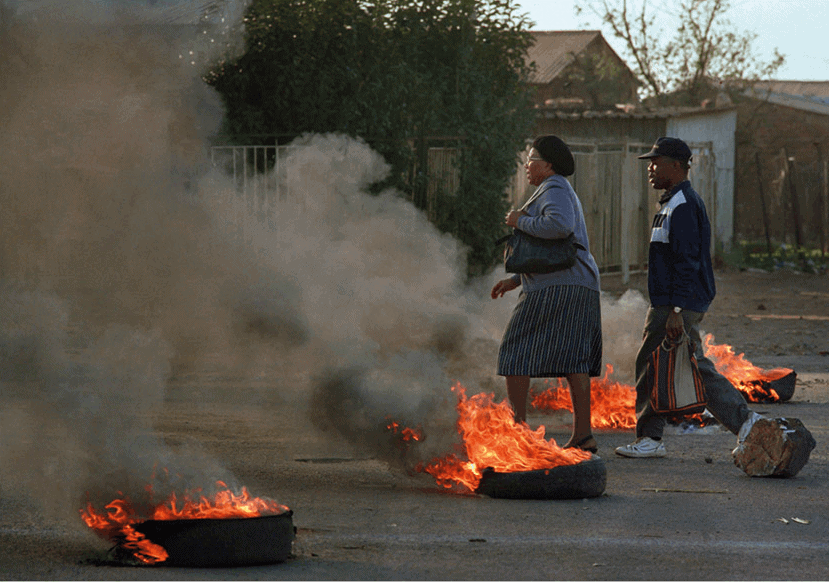 Work, Khumalo Street, 1990. A man and a woman walk through burning barricades to get to work. Thokoza is a small, nondescript township; the main road, Khumalo Street, runs north-south for four kilometres through an elongated triangle from one set of migrant workers’ hostels to another. As the Hostel War cemented frontlines, Khumalo Street became a no-go area, though occasionally we would brave a run along with it, sinking low into the car seats while racing through the stop signs and hoping no one would shoot. 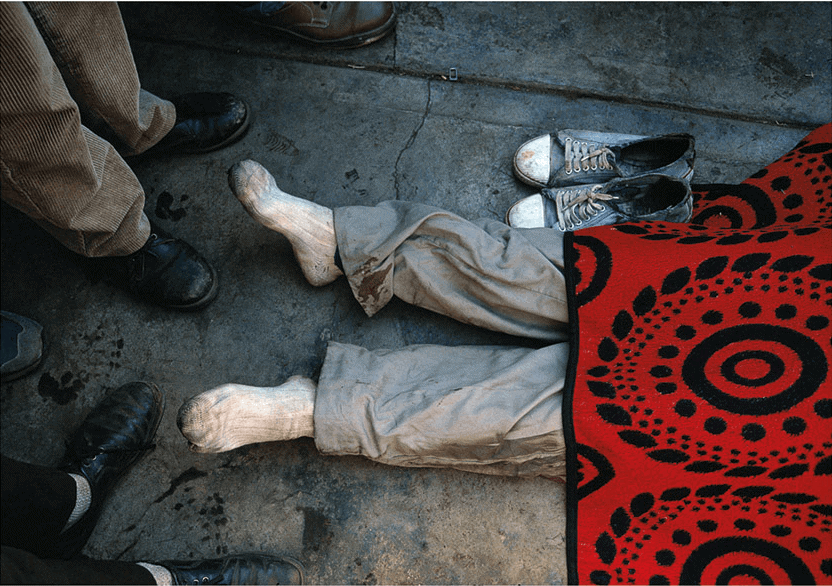 Shoes #2, Thokoza, 1996. Fellow combatants stand over the covered body of a young ANC Self Defence Unit member who was killed by Inkatha supporters. The young man’s mother sat wrapped in a blanket on a chair watching over her son’s body. Her face was set in a mask of anger and hatred. When a police detective came to the scene – a rare occurrence – she turned her venom on him, refusing to answer his questions. The SDU members also insulted him and told him to leave – no one expected any real policing to be done.

Ellen Agnew is a writer based in Cape Town, South Africa.