‘The Ease of Fiction:’ Valerie Kabov In Conversation with Dexter Wimberly

During her time in the Big Apple for The Armory Show 2016, Valerie Kabov spoke to Dexter Wimberly, New York-based independent curator and fervent art fan, about his recent exhibition titled ‘The Ease of Fiction’ held at CAM Raleigh, North Carolina. Through his practice over the years Wimberly has been peeling back the layers of his own cultural upbringing (as an African American) and the connection between Black Americans, Africa and the diaspora – going deeper and deeper into this connection – but all the while simultaneously engaging with other topics and areas of interest in order to support emerging artists without restricting their own practice and interests. 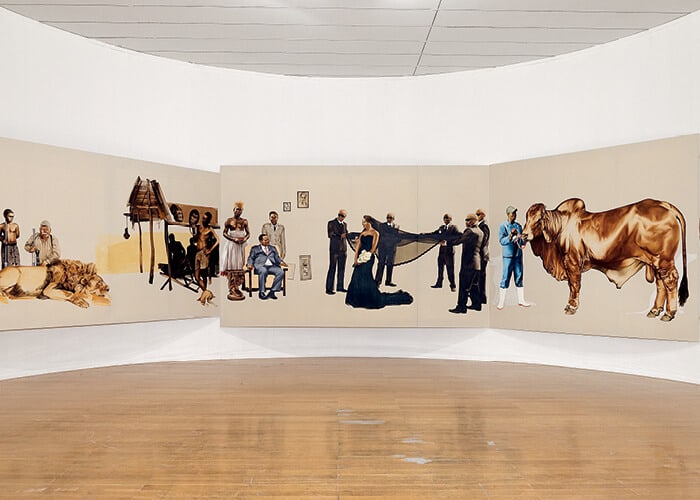 ‘The Ease of Fiction’ is part two of an ongoing exploration of Contemporary African Art. Last year, Wimberly co-organised an exhibition in New York City titled ‘No Such Place: Contemporary African Artists in America’ at Edward Tyler Nahem Fine Art with friend and collaborator Larry Ossei-Mensah. This exhibition focused on debunking the idea of Africa as a mono-culture and featured works by artists ruby onyinyechi amanze, Modou Dieng, Brendan Fernandes, Derek Fordjour, Sherin Guirguis, Vivienne Koorland, Wura-Natasha Ogunji and Adejoke Tugbiyele. In the second iteration, with CAM Raleigh, Wimberly focuses on varied interpretations of history, on and off the continent, with artists such as ruby onyinyechi amanze, Duhirwe Rushemeza, Sherin Guirguis and Meleko Mokgosi. 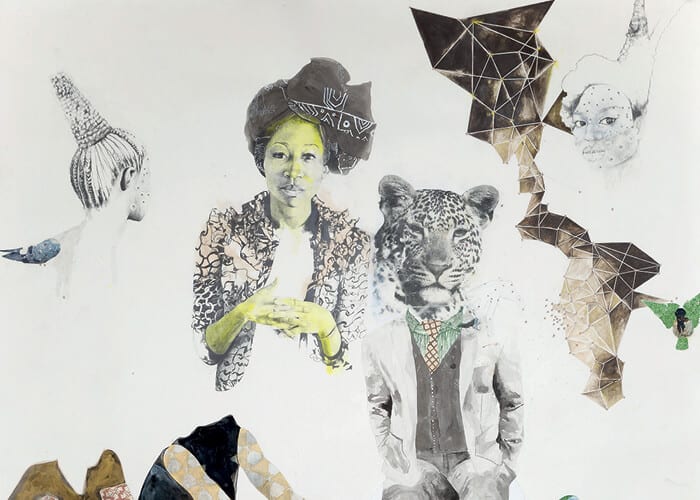 Valerie Kabov: Paths to curating are many and varied. Can you please give a little bit of background to your career as a curator? How does an entrepreneur andco-founder of a brilliantly successful youth marketing company find himself in the rather thorny field of art curating?

Dexter Wimberly: I co-founded a marketing and PR agency in 1995 at the age of twenty-one. In the thirteen years that I managed the company I met several talented photographers and graphic designers who were actually fine artists leading double lives. By day they would shoot advertisements or design corporate logos, but by night they’d be in their studios making paintings, sculptures or fine art photography. I found this duality wildly fascinating. Prior to that time my experience with contemporary art went no further than visiting museums a couple of times a year. I was from another world but art, and more importantly the artists themselves, became the focus of my attention. For years I’d been working with clients such as the Coca-Cola Company, Adidas and Virgin Mobile and, while these were lucrative accounts, I never felt as though my contribution was as personally fulfilling as it could be. Once I began applying my entrepreneurial experience to the careers of artists, I could immediately see the impact I was having on their lives. I could also feel the difference it made to me.

I did not originally plan to become a curator – organising exhibitions was just an extension of the support I could offer artists. It wasn’t until a decade ago, after I was hired by the Savannah College of Art and Design as a marketing consultant, that I began to consider the possibility.

At the same time, I was organising exhibitions on behalf of artists I considered close friends and sensed that I was developing a curatorial voice. Some of these exhibitions drew the attention of art world insiders and I was offered the opportunity to work with a museum and then a commercial gallery. It’s only in hindsight that I see how unusual my path to curating has been.

How does your background shape your approach to curating? Interestingly, your bio states that you have shown more than three hundred artists in various projects. Is this an indication of your priorities: championing artists and supporting their careers?

I entered the art world with artists as my primary focus. They were my first allies and taught me about the challenges of being anartist. A couple of artists believed in me earlier and as a result I believed in myself and the idea that I could make a significant contribution.

My personal interests have always included history, law and economics. The art world presented itself as the perfect place for me to apply these interests. I’ve been very prolific in terms of the number of exhibitions I’ve organised and the number of artists I’ve collaborated with. There are two reasons for this: the first is that I am always seeking opportunities to show great work – I am very romantic about art – and I realised many years ago that what I can offer (in terms of connections to talented artists, fresh ideas for exhibitions and my communications experience) is very valuable to galleries and art institutions. The second reason is that I have the interest and energy to work at a heightened pace. It’s not a race to do more than anyone else; it’s simply my desire to do as much good work as possible. 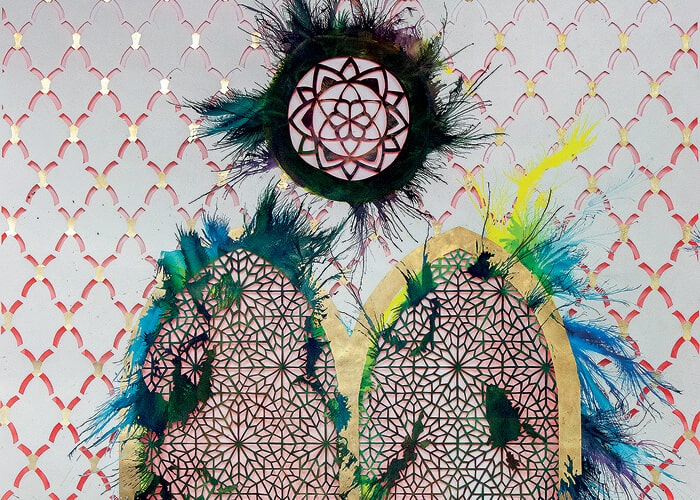 Your work spans African contemporary art, African diasporan art and African- American art. What came first and how did this interest grow?

My curatorial practice is not tethered to my ethnic background; my practice is anchored in my interests. It is as equally influenced by my American identity as it is by my African-American or Black identity. I say this because what I’ve been exploringmost consistently in my curatorial work is history, consumption and politics. All of these subjects are deeply connected to my life as an American; a Venn diagram of all my exhibitions would illustrate this common thread. That said, I am deeply interested in my own culture and the connection between Black Americans, Africa and the diaspora.

African contemporary art is often viewed in the same category as art from the African diaspora. In ‘The Ease of Fiction’ they overlap entirely. How do you feel about this categorisation?

Yes, there is the pitfall of categorising ‘Contemporary African Art’ along with all art from the African diaspora. I’m aware that there are significant differences. Broadly speaking, all art made by African Americans and artists throughout the African diaspora is often referred to as ‘Black art.’ This is a categorical generalisation that has been debated for years. My objective for ‘The Ease of Fiction’ was very specific: I wanted to present the work of four African-born artists currently living in America to further examine the very idea of Contemporary African art.

The title ‘The Ease of Fiction’ is both simple and exceptionally complex and rich with context. Where does the title come from?

I think that people are more likely to take the path of least resistance in their lives. We tell ourselves fantasies all the time: sometimes it’s called positive thinking and sometimes it’s a survival mechanism. Framing this idea in the context of history and beliefs about historical fact, I think fictions are very easy to believe.

I selected the artists based upon the subject matter of their work. It was actually their work that inspired the concept and title of the exhibition. 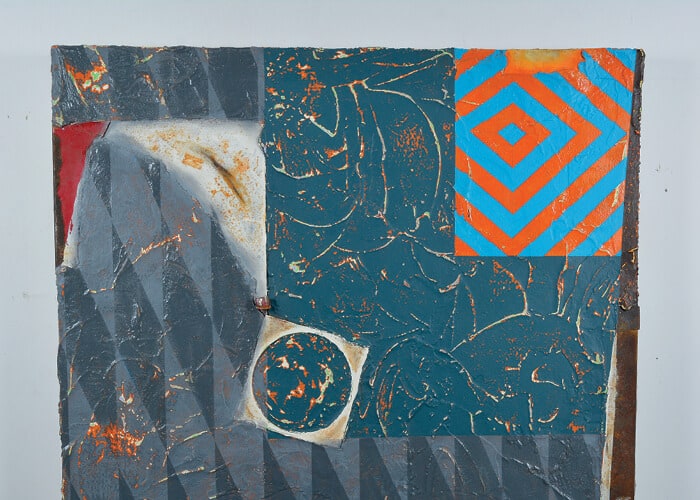 Have you already visited parts of Africa?

I have not visited Africa yet. The next chapter in my exploration of Contemporary Art from Africa will take me to Cape Town next year for my first visit and exhibition on the continent. Following that, I will be organising a gallery exhibition in Dubai (also in 2017) that will mark my first visit to the Middle East.

I’ve taken a very measured approach to mounting exhibitions in other countries. It’s important for me to feel as if there’s a compelling reason, more than just the opportunity to visit a new place. For example, I’ve traveled to Japan five times and have organised two exhibitions there. My wife is Japanese and as a result it became increasingly important for me to build a connection between what I do as a curator and the other culture that is now half of my life. However, what’s also exciting for me is that I’ve been presenting the work of emerging American artists in Japan, in most cases offering them their first exhibition in the country.

As an African American born in the 1970s, I grew up during a time when ‘reconnecting with one’s African roots’ was viewed as a very important part of Black identity. Eventually, I began to understand that much of that imperative was the result of a certain kind of cultural appropriation, the residue of 1960s Black Power theories, as well as thelegacy of America’s race politics. Much of this was outside of my personal ideas about Africa. As a curator, I realised that if I’m going to continue doing meaningful work with African artists it’s critical that I travel to see – with my own eyes – what’s being referenced and in its intended context.

The universality of ideas that I refer to in the exhibition essay is the notion that our personal memories and cultural biases impact how we see the world and how we interpret history. Sherin Guirguis’ work is a wonderful example of this. Her early memories of living in Egypt before moving with her family to Los Angeles at the age of fourteencontinuestoinformherwork,but she readily admits feeling both a connection to and distance from her place of birth. Through her work she engages with some of her childhood memories, such as seeing Egypt’s president Muhammad Anwar El- Sadat assassinated on television in 1981, but realises that her time living in America, as well as her physical distance from daily life in Egypt, has impacted how she interprets her own history.

Duhirwe Rushemeza’s paintings also address the effects of time and memory. Traditional imigongo cow dung paintings, Modernism and childhood memories of deteriorated colonial buildings in Rwanda and other African countries inspire her current body of work. Rushemeza’s paintings evolved from an earlier practice she developed in response to the 1994 Rwandan genocide. Realisingthat this trauma was but one dimension of her life, she went on to find inspiration in other aspects of Rwandan history, as well as her own travels to Cote d’Ivoire (in West Africa) and Germany.

Can you tell us more about the selection process and how you settled on this small group, all African and living in the USA?

I was very moved by Meleko Mokgosi’s paintings since my first encounter with him nearly four years ago, while visiting the Studio Museum in Harlem’s artist residency programme. I’d been looking for the right time and place to work with him. It means a lot to me the he and the other artists have trusted my vision. I’ve known ruby onyinyechi amanze for nearly seven years, and I’ve had the opportunity to work with her on a number of projects. I’ve also included Sherin Guirguis and Duhirwe Rushemeza in past exhibitions. Part of my curatorial process involves building long- term relationships with artists. This allows me to continue working closely with them as their practice evolves. It also makes our work together much more collaborative and intuitive.

Valerie Kabov is an art historian with a focus on cultural policy and cultural economics. Her research, writing and educational practice ranges from interculturality and globalisation, emerging art sectors and sustainability as well as art market analysis. She is the Co-Founder and Director of Education and International Projects at First Floor Gallery Harare, Zimbabwe’s first independent, international, contemporary emerging artist led gallery and educational space.