My name is Owanto, and I am an artist from Gabon. I have had the honour of representing Gabon in their first-ever national pavilion, which was a part of the International Art Exhibition at the 53rd Venice Biennale in 2009. This solo exhibition was curated by Fernando Francés, and I was the first artist from sub-Saharan Africa to have a solo exhibition in a national pavilion at the Venice Biennale. 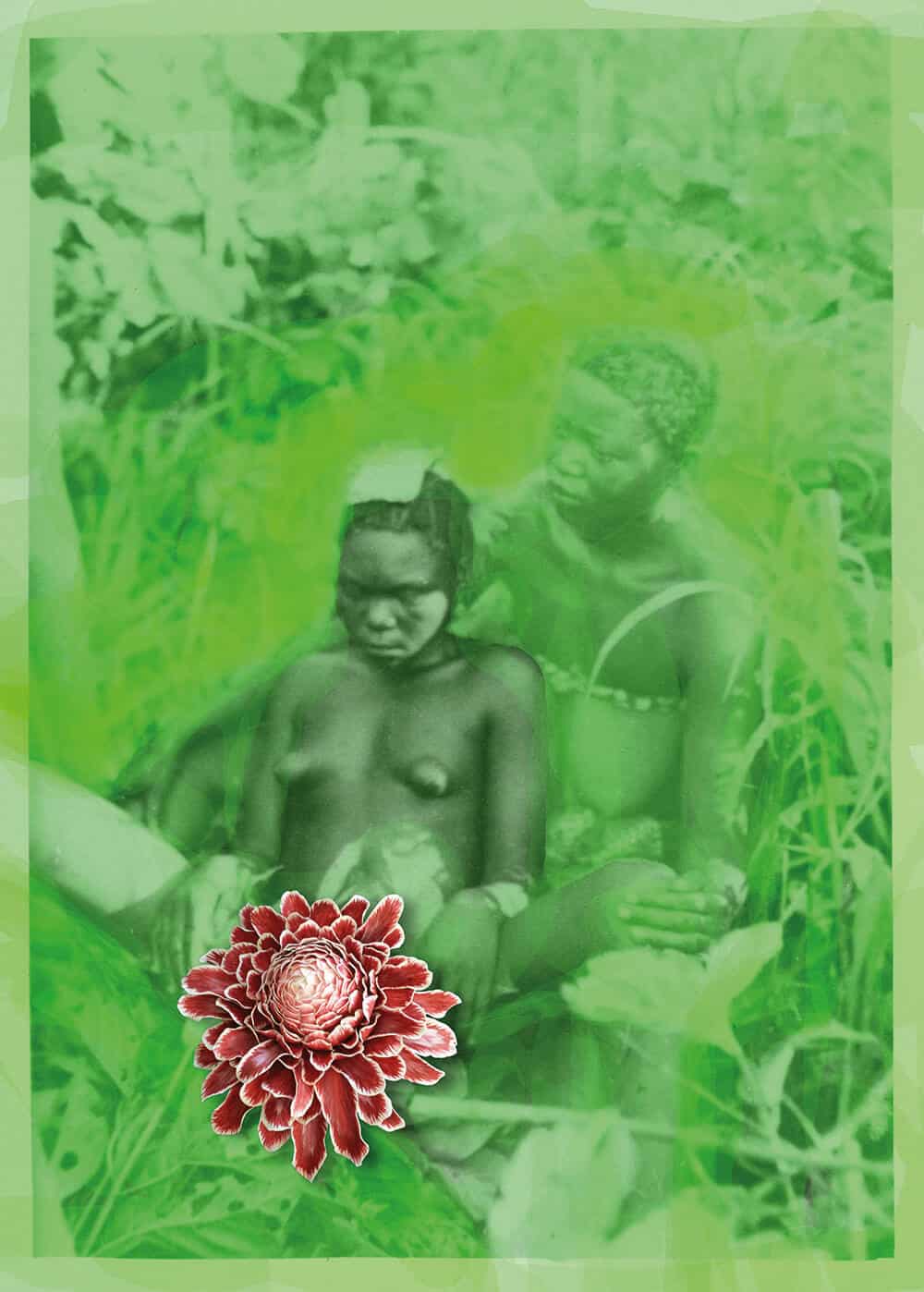 ART AFRICA: In the art world, you go only by the name Owanto – could you perhaps explain both the significance of this and its meaning?

Owanto: My mother was named ‘Owanto Bia’ by my grandmother, which means beautiful woman in Omyéné – one of the languages spoken in Libreville, Gabon. I borrowed my mother’s name as a way of honouring her, and the other heroines who raised me, but I kept it shorter since Owanto, meaning woman, seemed to be powerful enough.

I believe ‘Owanto’ is fitting, considering that I have made it my role to highlight, to embrace in my heart, women’s issues. This is evident in my Flowers Series, in which I call for girls and women to reclaim their power. Owanto is my identity as an artist, and I believe in the raw material of love, where mothers, daughters and sisters play their part and become agents of change.

I borrowed my mother’s name

as a way of honouring her, and the other heroines who raised me,

but I kept it shorter since Owanto, meaning woman,

seemed to be powerful enough.

In 2009, you exhibited at the Republic of Gabon’s inaugural pavilion at the 53rd Venice Biennale. Could you tell us a bit more about your exhibition, ‘The Lighthouse of Memory’, ‘Go Nogé Mènè’, as well as how your work has progressed, or developed, since then?

‘Go Nogé Mènè’ means building the future. It was a great honour to represent my country, Gabon, at the 53rd Venice Biennale in 2009. It was an incredible privilege to be on a multicultural platform that allowed global discussion to stimulate progress and question ways to build the future. Within this context, I looked to the past and compiled a projection of memories starting from the 1960s. I remembered and re-imagined being in Libreville where, as a child, I could feel my parents’ heartbeat and the euphoria surrounding Gabon’s Independence.

Photographs capturing the past confronted photographs of the present – hopefully to help shape the future. At the same time, I found myself asking about where we are going? I felt that this was the main question the world was asking, particularly around 2008 and 2009 following the global financial crash. Closer to home, Gabon had just lost El Hadj Omar Bongo – the father of the nation – who had run the country for 42 years. For me, ‘where are we going?’ is mostly a metaphysical question that concerns every one of us as human beings looking for direction and goals. In light of this, building the future was my only answer. The installation of a tree house displayed in the courtyard of a 16th-century palazzo was a metaphor for home, a laboratory for love, a place to build good things. Inside the tree house was a projection of the past and the present. The spaces inside had beds, my children’s belongings and painted graffiti on the walls. My children had left their own traces.

After my solo show at the Venice Biennale, I became even more committed to socio-political issues. I believed  – rightly or wrongly – in a sense of mission to create change through contemporary art. To do this, I had to believe in visual poetry. Art as a tool; art as a weapon for change. Neon lights and words. Photographs and sculptures. Found objects. Films and audio material. All of these would be usable to create statements. 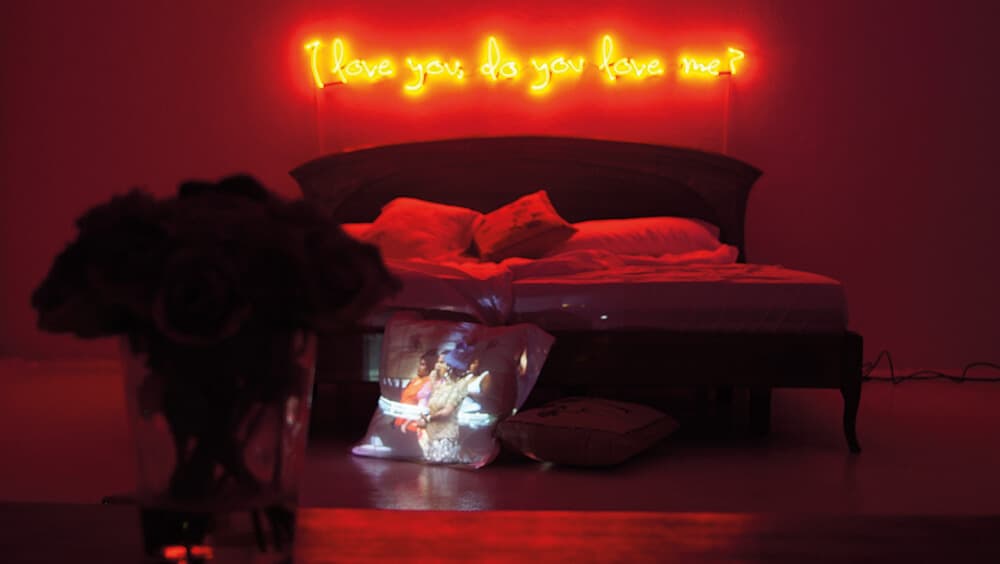 Owanto, I love you, do you love me?, 2015. Installation [bed, neon and slideshow projecting onto pillow] and Photography, dimensions variable.

Your artwork, La Jeune Fille à la Fleur (Flowers II), confronts female genital mutilation (FGM) and the global affect this still has on women today. Can you tell us more about how you came to create this body of work, and the significance of it being part of the permanent collection at Zeitz MOCAA – the largest museum for contemporary African art on the continent?

I first discovered little celluloid photographs of young women undergoing female genital mutilation/cutting (FGM/C) in a family album which had been handed down to me. My first reaction was to quickly put them back in le tiroir de l’oubli – something I call ‘the forgotten drawer’ – as I didn’t want to be upset, and I didn’t want to process the pain that I saw in those photographs – even though I could also understand that some of these images portrayed celebration. On the surface, these photographs simply captured a circumcision ceremony and they did not speak of mutilation. There is, indeed, the aspect of celebrating both the coming-of-age of young girls and tradition, but the side that I saw was mostly the pain. As a result, I decided to forget about the photographs.

Three days later, I came back to them because I could not forget. 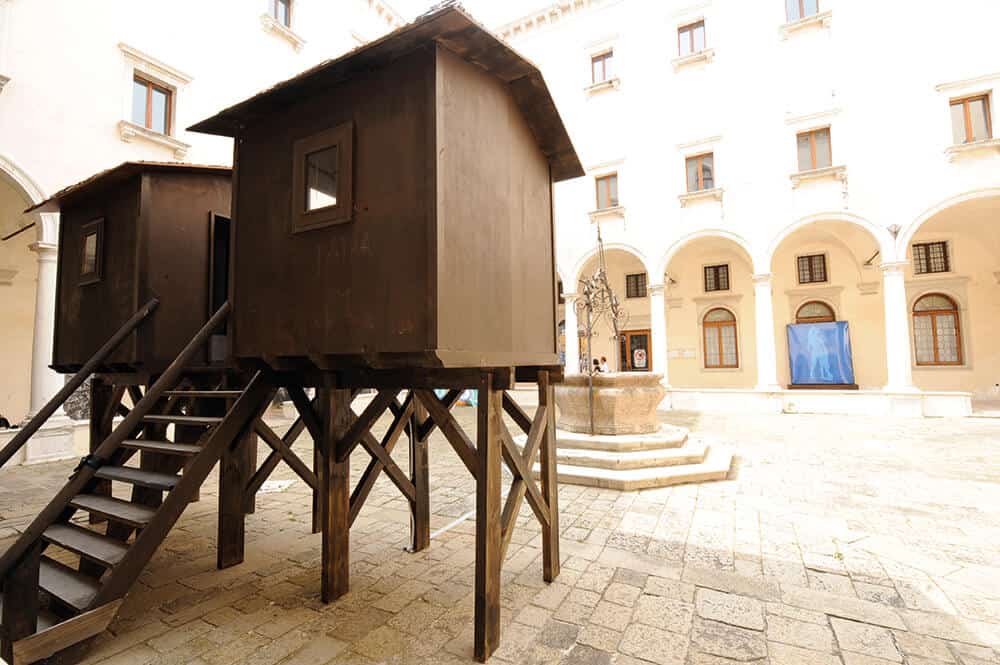 I decided then to completely go the other way. I decided to bring the matters that haunted me most about these ceremonies to life and to enlarge those tiny photographs up to three metres high. The medium I chose was aluminum – the photographs would be printed on metal – to create a kind of a contemporary feel, because FGM/C is a very contemporary subject.

Once enlarged, I thought it very interesting to create a hole in the part of the girl where the injury took place, the part of the mutilation. I filled that void with a flower made by hand, petal by petal, to bring a floral sensuality back to the girl. The flower is actually made with corn and glue, corn being an organic material. That flower would then create a change of narrative for the girl. Instead of a void, it would symbolise unity, hope and the blossoming of womanhood.

It was very important to me to have La Jeune Fille à la Fleur included in the Zeitz MOCAA permanent collection so that it could be seen by a greater number of people. Hopefully, this will allow the conversation to go further so that we can make the world a better place for women and girls. The significance of it being a part of the permanent collection at Zeitz MOCAA – the largest major museum for contemporary African art on the continent – is that it confirms to me that what I am doing is important. It allows the artwork to speak for itself, and for it to be a means of empowering women and girls. Mark Coetzee, the director of Zeitz MOCAA, said that the museum is meant to be a safe place for bringing up challenging social and political issues. Those words resonated with me. 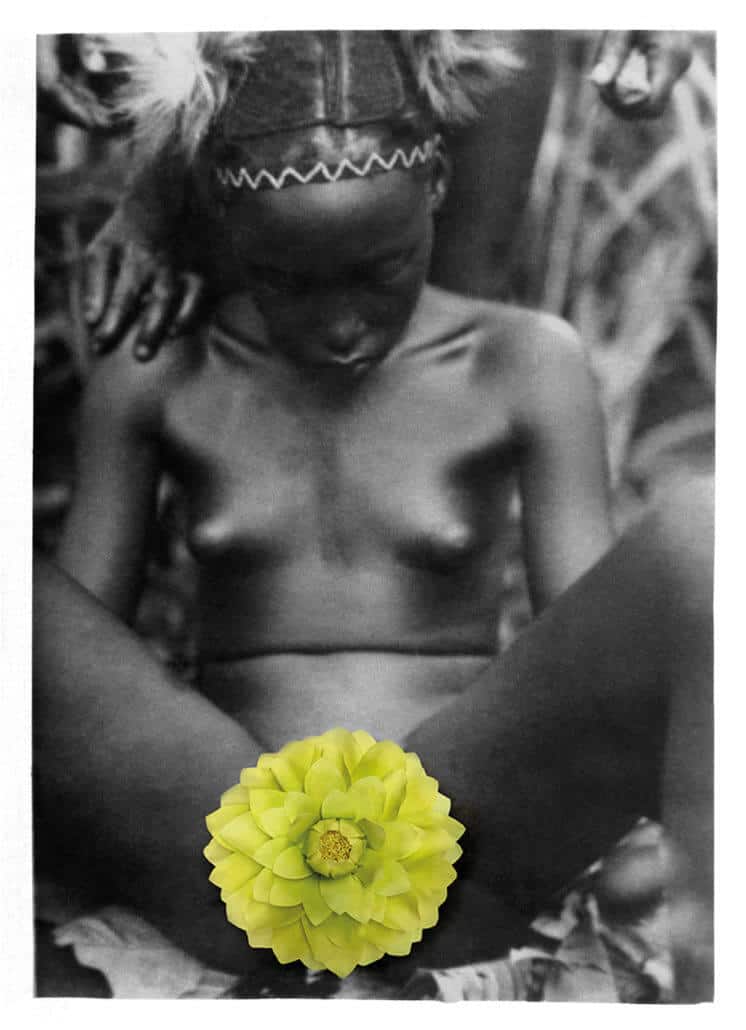 La Jeune Fille à la Fleur being seen in such an important institution validates the work and what it stands for. It allows me, the artist, to have a stronger voice. At once it brings the conversation within the sphere of contemporary art, and into the sphere of education and culture.

We are living in a historical moment. I believe Zeitz MOCAA will be a game – changer for the continent. It is an ambitious model, which I hope will be followed by other players on the continent. The museum will allow artists of the continent to express their voices in their own continent. It is a huge moment, and it is opening doors and new possibilities that matter.

Could you tell us about any current projects that you’re working on?

I am currently working on a project titled One Thousand Voices, which aims to give a voice to voiceless women. My daughter Katya and I – we are partners, she’s a journalist – are aiming to interview 1 000 survivors of FGM/C. This particular project started a year ago when I began to interview people from the South Asian community in New York City. Now we are receiving voices via the Internet. People are sending their experiences through WhatsApp, and voices are coming to us from all over the world. We have recently received voices from Singapore, Bahrain, the United States, Tanzania and Kenya. These women’s voices are going to overlap and be united as one voice.

We are living in a historical moment.

I believe Zeitz MOCAA will be a game-changer

One Thousand Voices signifies a bridge between the visual images of the past (my original photographs date back to probably around 1940) that I have rescued and digitalised, and these sound images – the One Thousand Voices of recorded testimony – of contemporary society. Together they create a link between the past and the present, and question where we’re headed globally in terms of women’s rights over their own bodies.

With regard to urgency and relevance, we are talking about 200 million survivors of FGM/C today, and we are talking about three million young women who are at risk each year. So that’s really my commitment, and I’m feeling quite emotional about having the possibility to speak about it.

Where on the global stage can we expect to see your artwork in the near future?

I started the Flowers Series three years ago and other works from the same series was shown by the Voice Gallery in October 2017 at the 1:54 Contemporary Art Fair in London, and in November 2017 at AKAA Art and Design Fair in Paris. I also had a solo show curated by Azubuike Nwagbogu during LagosPhoto this November, 2017.

Owanto, I love you, do you love me?, 2015. Installation [bed, neon and slideshow projecting onto pillow] and Photography, dimensions variable. 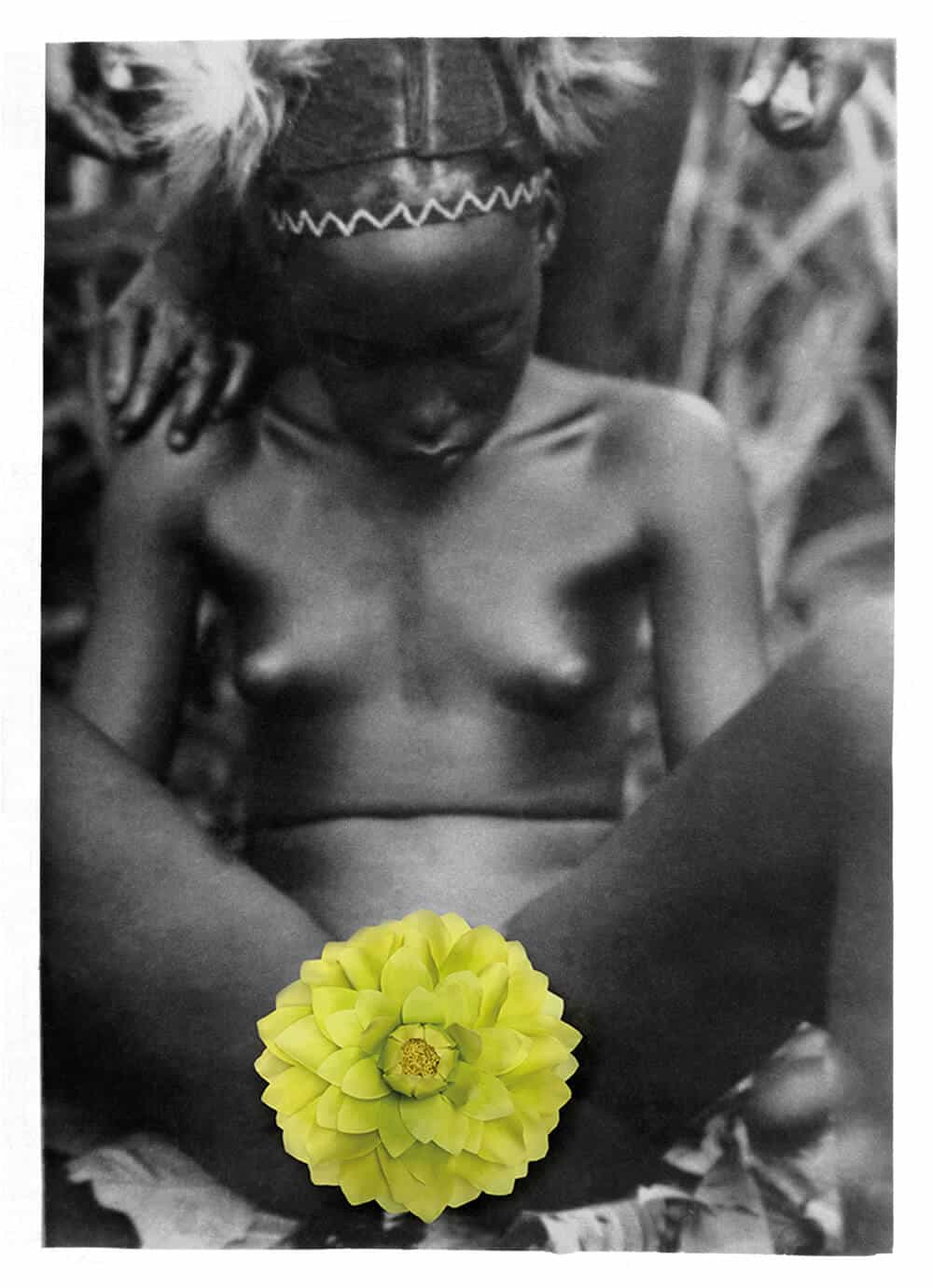 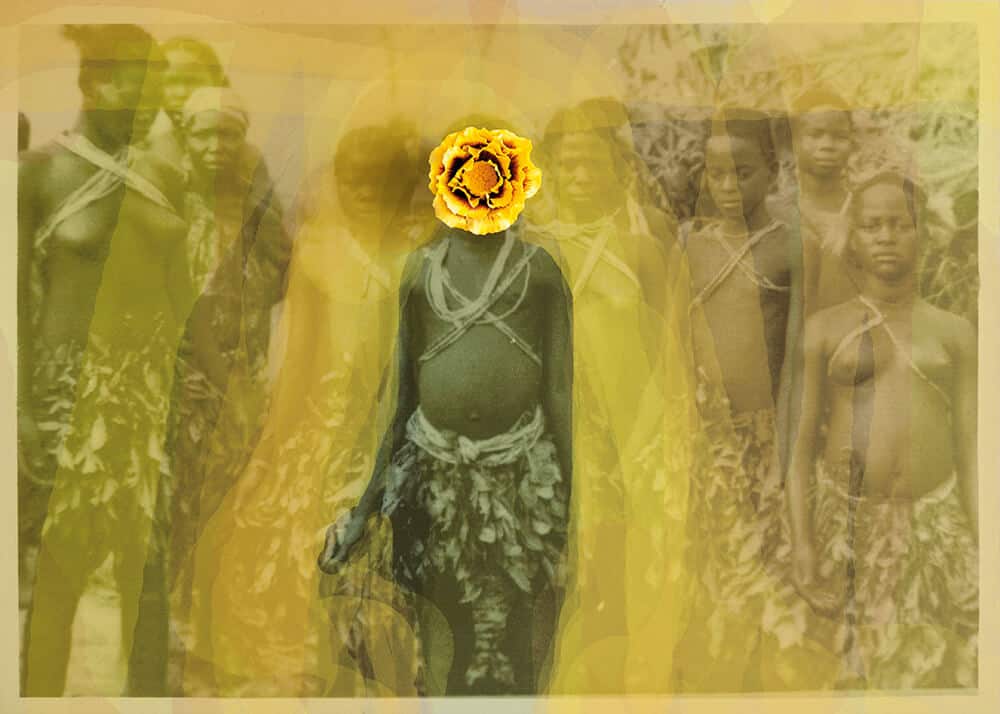