‘The Good, The Bad and the “Boom!” By Ashraf Jamal

Pop Art (or pop culture – it’s hard to tell the difference these days) is everywhere. Its emblematic ubiquity is summed up by the golden arches: a crass, shiny, up-ended arse. And it’s a buzz-word Norman O’Flynn can’t stomach, writes cultural analyst and educator Ashraf Jamal. 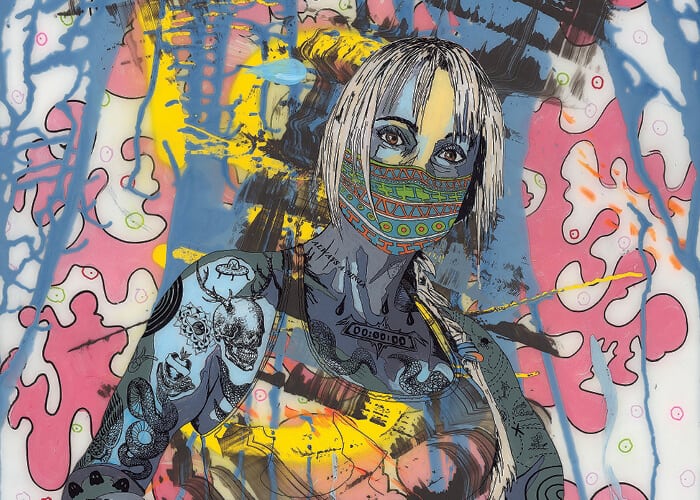 “Use the word pop again and I will go mad,” he says as we drive towards his studio in Sunset Beach (Cape Town), one of those Tuscany-esque suburbs that Ivan Vladislavic picked apart in his book Exploded View. The hub for retirees and beachcombers, complete with its post-card view of Table Mountain and the city below, the suburb is also a refreshingly novel spot for an artist’s studio.

Settling down to a coffee laced with a tinny-tasting sweetener (O’Flynn is diabetic), I can see why Pop is not an entirely satisfactory descriptor. There’s a series of large reverse-glass abstracts on plexiglass that the artist is readying for a show at Fried Contemporary (Pretoria), perched smack-bang alongside a series of equally glossy- glassy figurative works for a show at Cape Town’s Worldart gallery.

The series of abstracts, worked with a squeegee, is called ‘The Noise Behind.’ I’m reminded of Cy Twombly (whom I learn O’Flynn loves), the marks quivering; runnels plunging downward, veering left and right like the graph on a truth-telling machine. There are no recognisable images here, just an invisible buzz made visible. It could be dark matter or white noise, but what it definitely generates is the artist’s acute awareness of the static. Contra T.S. Eliot, there is no still point to O’Flynn’s churning world. 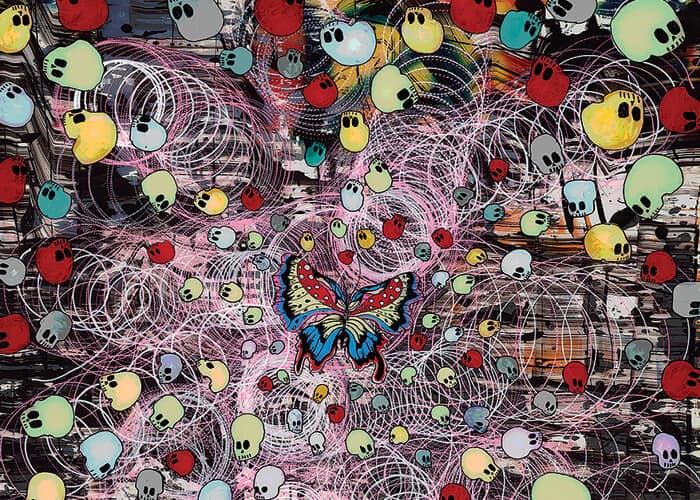 Restlessness, frenzy and unsettlement seem to drive the artist. Scoping the studio – and failing to quaff the Chernobyl-tasting coffee – I notice a scrawled sign that reads “The universe needs a protector – a real guardian to right these wrongs” propped beside an illustrated copy of Masonic and Occult Symbols. So while there’s a radioactive buzz in the air, it would seem that O’Flynn also hankers after that still point – to no avail. It’s the din in the silence that tick-tick-ticks, “the noise in the head that makes the eardrums burst,” that keeps generating what O’Flynn dubs ‘a quiet confusion.’

I learn that viruses fascinate him, in particular their “beautiful” cellular structure; that what matters is how “ideas get passed along.” Therefore, if pop as an art form and a culture has any sway for O’Flynn it’s because it’s a virus, because it’s gone rogue and is now impossible to quarantine.

Since its inception in 1950s Britain – which is also the dateline for the ungodly birth of polymers – pop has crossed the Atlantic, redefined America (as Americana) and gone on to entirely re-graft the earth. “Pop is love, for it accepts everything,” says Robert Indiana. “Pop is dropping the bomb. It’s the American dream, optimistic, generous and naïve.” Its all-inclusive indeterminacy is what makes it scary, but which also makes it a fait accompli. A widget for anything and ‘everything,’ pop is here to stay.

Pop’s ascendance, transcendence and wholesale tubercular consumption of the earth was not something its originator, the British art critic Lawrence Alloway, could ever have anticipated. What he meant by ‘Pop Art’ and ‘PopCulture’ were “the products of the mass media, not works of art that draw upon popular culture. In any case, sometime between the winter of 1954-1955 and 1957 the phrase acquired currency in conversation.” However, today Alloway’s fine line has blurred into indistinction. Pop is not a movement anymore but a life force, or a death cult for that matter. O’Flynn sums it up as “The good, the bad and the ‘Boom’!” 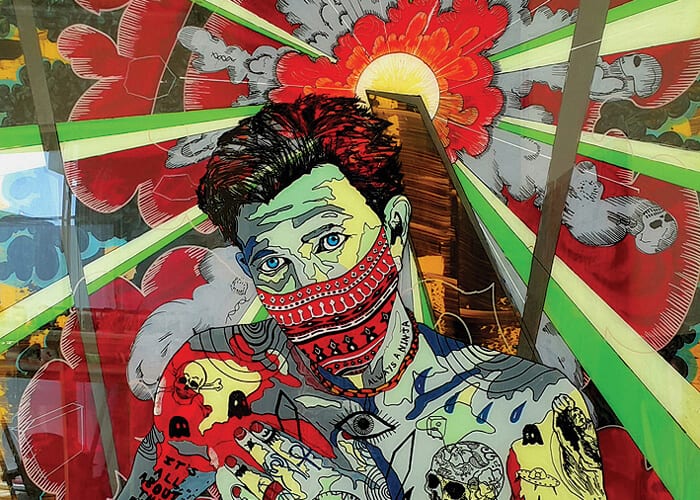 A nod to Sergio Leoni’s famous spaghetti-western and, in equal parts, a nod to Marvel comics and the paintings of Roy Lichtenstein, O’Flynn’s summation of his vision is also something far more ominous. What he invokes here is a world that has lost its centrifuge – its ability to separate solids from liquids, good from bad, hence the portentous ‘Boom!’ His is a vision of an earth without a stable core, an art world without an overriding shape and narrative, belief without a system.

This uneasiness, which in O’Flynn’s mindset never relapses into complacency, amounts to a radically relative and uncertain state. What fascinates the artist is what he calls the ‘speed of change’ and the ‘explosion of knowledge.’ The barred timelines in his paintings, which he dubs ‘time keepers,’ serve as reminders that “time is running out.”

This existential dread is something which O’Flynn mirrors through his ‘easy glossy’ works. At one level it would seem that this is just what his paintings are – ‘easy’ and ‘glossy’ – his imagined audience a swimmer who “comes from the beach and takes an MDMA” before settling cross-legged in front of one of his paintings. It’s the effortlessness of it all that O’Flynn is conveying, but one needn’t be a drug-fuelled beach-bum to get what is going on.

The words ‘Game Over’ pop up frequently, reminding us of O’Flynn’s favoured format and inspiration – the pinball machine. There is something archaic here, because pinball machines are retro echoes of a clunky time. In this zone – the field of the paintings – jagged vectors connect to circular islands to form an archipelagic pattern. There is no encompassing continental vision here; rather, we’ve entered a fragmented, cellular, viral world in which, no matter what sedative you choose, no one is permitted calm. 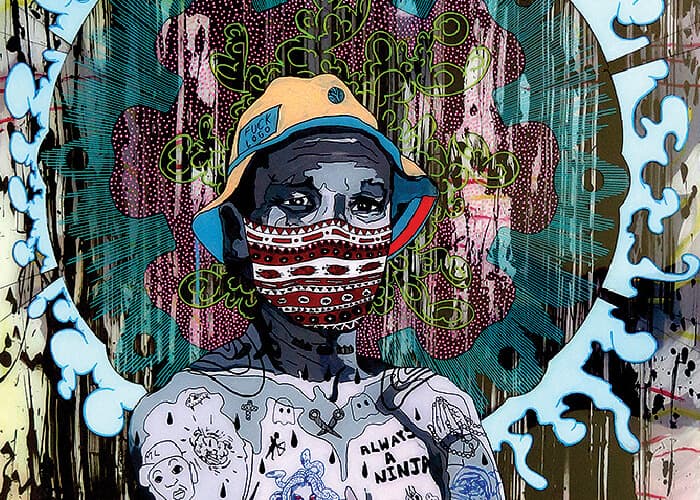 Elsewhere, a script that repeats itself – ‘run run run’ – announces the theme and kinetics of the work – a fevered incessant flight and the deranging treadmill which never goes anywhere but which gives us the illusion of movement. The upshot here is that we’re stuck in a sick paradox. These days, with all the blithe talk of the end times, the endless lust for the novel and new, or the age-old Baudelairean yearning to be anywhere but here, there is the acute sense that we are nowhere, precisely because we are connected to no time.

O’Flynn’s ‘content’ is a smorgasbord of the theocratic and atheistic, metaphysical and secular. We see images of Christ and Mary Magdalene – the hallucinatory stuff of Catholic kitsch – combined with the mythic Medusa; the elephant god Ganesh; Adam and Eve and the Tree of Knowledge; Durer’s hands in prayer; the artist’s son, Stormy, as a child-like Buddha; tattooed hearts and skulls; crop circles; space ships; emoticons; guns and a marijuana-smoking hipster-superhero.

O’Flynn’s eclectic mix of iconic imagery, neatly placed in their cellular bubbles, are the cherished tropes we cling to, along with the memories or yearnings which they remind us of. They are our memento mori. However these bubbles, like Michael Jackson’s oxygen tank, cannot save us. Shattering the composure of these insulated worlds, we find the radioactive energy fields that carve up and eviscerate the artist’s pin-ball world in which “the eye keeps being knocked around.”

A mash-up of the archipelagic, interstellar, implosive and centrifugal, O’Flynn’s world is the fraught fall-out of any shred of certainty we might possess. If these worlds are not calming, neither are they wholly apocalyptic.

Rather, it is that ‘quiet confusion,’ that achingly anxious and gnawingly wakeful sense of threat that grips us. This confusion is a mirror of our hyper-connected yet utterly disconnected lives – part believer, part cynic, part naïve, part jaded – but at least the pictures kind-of feel good to look at. 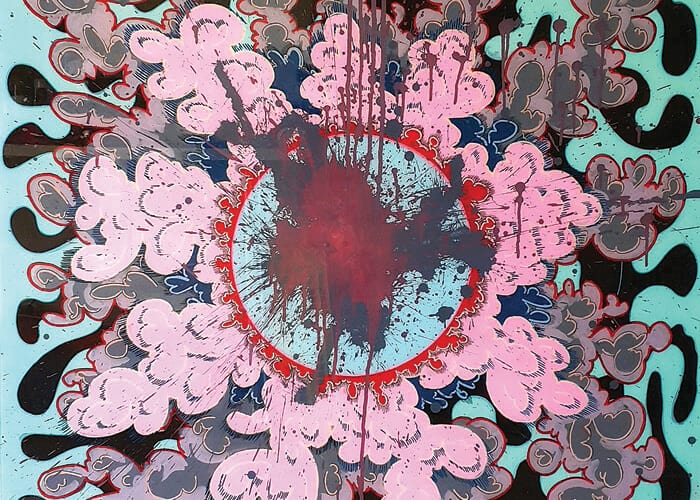 Ashraf Jamal is a Cape Town-based cultural analyst, writer and educator. He is the former editor of ARTsouthAFRICA and currently lectures in Film & Media Studies at Cape Peninsula University of Cape Town (CPUT).