ART AFRICA caught up with Khehla Chepape Makgato to talk about his latest body of work ‘The Heroines of Southern Africa,’ which opened at the Market Theatre, Johannesburg last week and runs until the 30th September 2016. 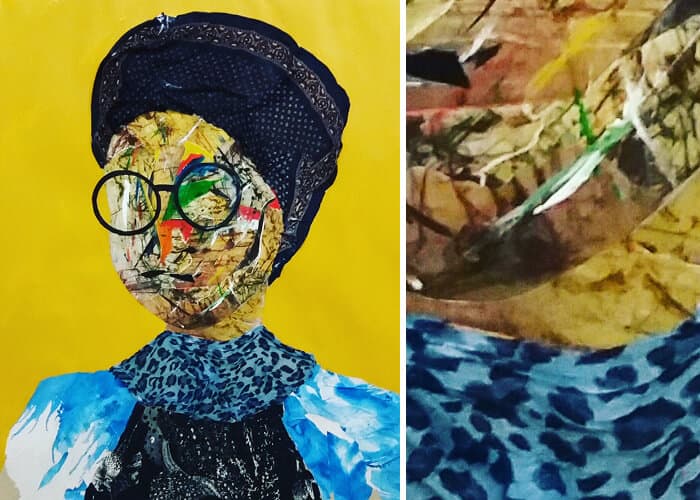 ART AFRICA: You were born in Kensington, Johannesburg and raised in Makotopong village, outside Polokwane in Limpopo. What role did art play in your upbringing?

Khehla Chepape Makgato: Art played a very significant role in my upbringing in that I related more with the visuals and texts around me at an early age. When I was ten, and in Standard Two, my primary school art teacher made it possible for us to appreciate art. He taught us about South African art history and that’s where I learned about the Old Masters such as Gerard Sekoto, George Pemba, Ernest Mancoba and many others. He also went to the extent of scripting a play for us, in which I played a drunkard. The play was about alcohol abuse and burning people with tires who were accused of witchcraft. This stagepiece took me to the city of Polokwane for the first time. There was a primary school art and culture competition being held under the banner of Welfare Day. Besides drama, he encouraged us to produce artworks that he would then take to the (then) Mopani News broadcast, a television programme which displayed our artworks after every news bulletin in the late 1990s.

In 2010 you initiated a community arts organisation called Samanthole Creative Projects, which aims to provide general mentorship, art skills, encourage reading of poetry and literature, and motivate the youth in the rural areas where you grew up. You’ve also run numerous workshops throughout the country, and established spaces (such as the Rhodes Park Library Book Club) to nurture creativity amongst South African youth. How have these experiences informed your own practice and your current body of work ‘The Heroines of Southern Africa,’ on show at the Market Theatre in Johannesburg?

Well, the workshops I run at Samanthole Creative Projects are basically there to bring about advocacy of the arts and literature to the youth. They are not necessarily contributing much to my practice; however I am of the view that these experiences are priceless. The energy that the youth bring into these workshops is transmissible. Earlier this year I introduced them to a Monotype printmaking technique. I realized then that the workshops have actually become a part of the process behind my collage-making – the prints I do with them, mostly my demos, end up fueling embers of my craftsmanship. The unchoreographed patterns that emerge from these prints find their way into my collages.

In South Africa we complain a lot, at least in the arts, about how the large fraction of the populace does not support the arts but we forget to ask why. In many of the (predominantly) rural schools I have visited recently, you have a teacher assigned to the creative arts with no background on the subject and this cannot be correct. The Samanthole Creative Projects was established to help bring awareness and afford our youth with the opportunity to realise potential careers in the arts. We need more and more initiatives that support and promote creative arts developments so that we build the society that appreciates and takes pride of its arts industry. According to a new study by the Central Connecticut State University, South Africa is ranked as one of the most illiterate countries in the world. We cannot sit down and wait for the government to help reduce this scourge, but we could take action in starting book clubs for the kids and youth in our communities. It is not children’s fault for being illiterate but it is the disease the society has because books are inaccessible to its children. I have started a few reading book clubs in various communities and recently have had a school established as the Khehla Chepape Makgato Library in honour of my efforts to arts and literacy development, especially in rural areas. 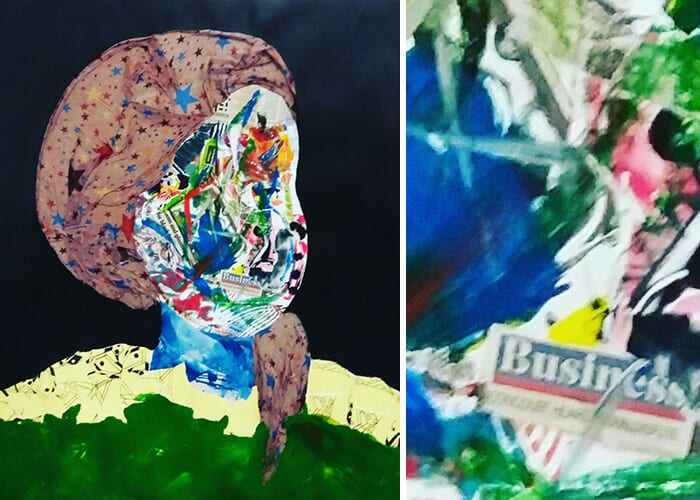 According to your artist statement, this body of work was produced following a conversation with the Market Theatre’s Artistic Director James Ngcobo, who was telling you about the (then) upcoming play Mosali Eo U ‘Neileng Eena, which was written by Ntšeliseng Masechele Khaketla and directed by Selloane Lalu Mokuku. How did this conversation inspire your work and what are some of the thematic similarities/differences in the parallel body of work you have produced?

In the past four years I made it my obligation to produce a body of work based on the Marikana Massacre. It is a personal and social tribute to our brothers who were mowed down by the state police force in 2012. My initial solo exhibition was titled ‘MARIKANA – Truth, Probability and Paradox’(2013), followed by ‘Towards Speculative Realism – Voices From The Koppie’ (2014), ‘Mephaso – The Rituals’ (2015) and ‘Manuscripts From Wonderkop’(2016), which I am yet to exhibit due to unforeseeable circumstances. The Artistic Director’s visit to my studio was serendipitous because I got a chance to work on a subject so close to my heart, ‘The Heroines Of Southern Africa’. This body of work is a celebration of African women and their excellence. It is also a very wonderful time for collaboration because the visual arts met theatre, poetry and music during the opening night where Ntsikwane, the afro-jazz musician performed alongside the poet, Sir Poison. The night which was concluded with us going to watch the stagepiece Mosali Eo U ‘Neileng Eena. The play also celebrates the women of the Basotho nation.

This work aims to celebrate a number of historically significant black female leaders from the 18th century, yet you also reference being raised in a community led by women. How did you decide on the figures you chose to present?

Narrating the history of strong black women in South Africa is not a simple task. My decision to focus on BLACK QUEENDOM as a point of departure was tough. I was fascinated with the idea of retelling the history of my beloved country, focusing on women who excelled as leaders. Kings have been idolised and glorified over their queens since the beginning of history. These kings were born and raised by women and they married women who gave them princes who succeeded them, but why don’t we hear more about these women? My research deliberately went far back, to strong women of the 18th century such as Modjadi – The Rain Queen (the leader who was revered and feared by the likes of Shaka Zulu), Mantatisi – The Tlokwa Queen (a leader who protected her tribal territory against the settlers), Queen Nandi – Shaka Zulu’s Mother who had spent many tough years being slouched back and forth between the Zulus and her own people, abaHlongo. During that time she also had to protect her son from famine, assassination attempts, and his own destructive temper.

Featured also in this body of work is Nongqawuse – The Xhosa Prophetess of Doom – a character I admire so much because of the great influence she had at a very young age of sixteen. Her prophecies led to a millennialist movement that terminated in the Xhosa cattle-killing crisis of 1856–1857, in the Eastern Cape Province. Another element that is interesting about her is that she became one of the first black female prisoners at Robben Island. I have included female portraits that reminded me of the women in the community that brought me up and gave them common names such as Hunadi and Mosebjadi. 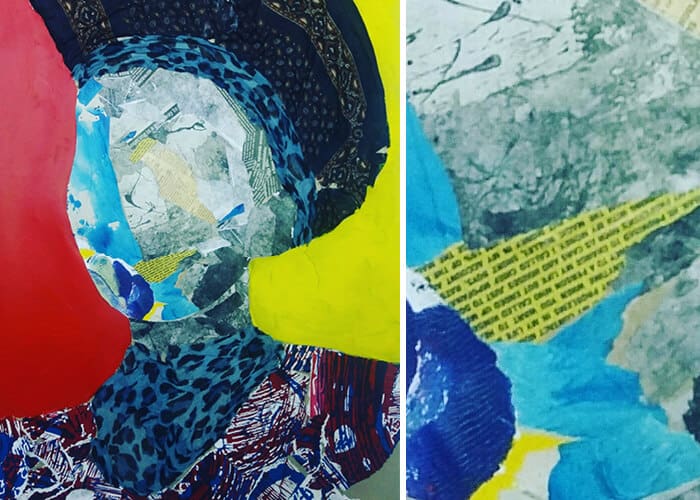 Please tell us a bit about your working process? How do you select the materials for your collages and how does this layering contribute to your thematic concerns?

My process is simple. I work from my original prints of varied techniques such as etching, linocut, silkscreen and monotype. For this particular show I also used acrylic paints, fabric and recycled prints from fellow artists with their consent. Most of these prints are what we call ‘miss-prints’ in printmaking jargon. I rescue them from being destroyed by giving them a new life in my work. Sometimes I prepare prints from scratch and I collect headdresses, otherwise known as scarfs or ‘doeks’. The layering contributes to the thematic process because the fabric I use has leopard prints – which traditionally speaking, is a sign of royalty in most African queendoms and kingdoms.

‘The Heroines of Southern Africa’ will be on show at the Market Theatre, Johannesburg between the 9th – 30th September 2016.