The Innovation Issue (13.3): In Conversation with Uns Kattan

In conversation with Uns Kattan, Art Dubai’s Education Manager and Project Coordinator for the Global Art Forum. This interview appeared in the March ‘Innovation Issue’ (13.3) of ARTsouthAFRICA. 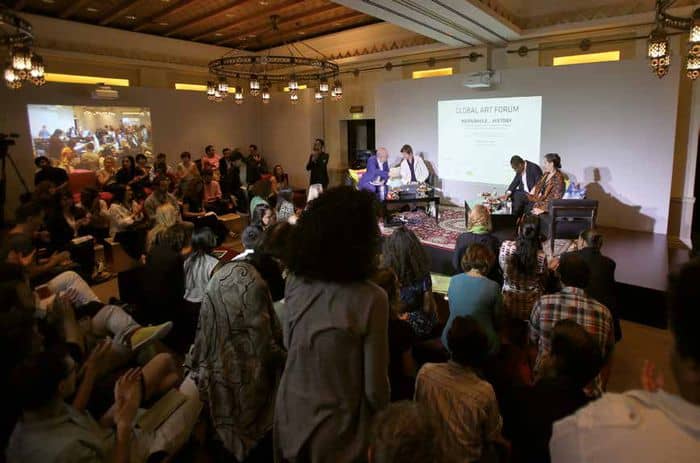 The ninth edition of the Global Art Forum, running alongside Art Dubai, takes places for the first time in Kuwait City (March 14-15) and continues in Dubai (March 18-20, 2015), taking on the theme of technologies and their impact on the world of art and culture. Titled ‘Download Update?’, the Forum is co-directed by Turi Munthe and Sultan Sooud Al Qassemi, with Shumon Basar as Director-at-Large.

ARTsouthAFRICA: This year’s Global Art Forum is titled ‘Download Update?’ – how did you come to this title and how does it inform the content of the forum?

Uns Kattan: Shumon Basar, our Director-at-Large, came up with the title of this year’s Global Art Forum. It evolved out of discussions about the cyclical nature of technology and how, as he describes, it is an “always-on process of re-making who we are.” The content of the Forum questions and debates technology from a cultural, historical and sociological approach.

Who are some of the key participants in this year’s edition of the forum?

Why do you think it is necessary at this point in time to have a conversation about the role of technologies in the art world?

The world has changed so significantly because of the technology and communications revolution over the past few decades but we have not taken stock of how this change has impacted artists’ practice and the art market and wider than this the way we think, communicate and create. This is also the first time that this degree of attention has been dedicated to this topic in the Middle East.

The March issue of ARTsouthAFRICA is ‘The Innovation Issue,’ with a focus on cutting-edge work, digital media and creatives who are using innovative technologies/solutions and approaches to make new work. What creative and cultural innovations (particularly from or inspired by Africa) are of interest to you?

It has been such a great pleasure to see the programme of this year’s Forum come together and through this process to learn about so many cultural innovations. I am particularly excited about the Virtual Museums’ panel. Gabriel Perèz-Barreiro, Director and Chief Curator at the Colección Patricia Phelps de

Cisneros in Caracas/New York, Jack Persekian, Director and Head Curator at the Palestinian Museum in Jerusalem and Gala Berger, Artist and co-founder of Museo La Ene, Galería Inmigrante and Urgente platform in Buenos Aires will be discussing museums that are engaging with ‘virtual publics’ to give a diaspora audience a sense of a physical belonging to the museum. This issue is particularly pertinent to geographic boundaries within Africa and the Middle-East where so many people are living away from home, and where new museums and institutions are being built.

The forum’s directors, Turi Munthe, Sultan Sooud Al Qassemi and Shumon Basar, all have a deep interest in politics. To what extent does regional and national politics influence the reach and influence of technologies on a particular cultural creative scene?

It has been very interesting witnessing how technology has enabled discussion in the Middle-East. Through social media, regional and national politics have engaged a much broader audience and this access to information has been central to inspiring creativity across the region. It is not so much that politics have been hindering the reach and influence of technology but that technology has been instrumental in expanding the reach and influence of politics.

This year’s theme is a “manual about the myths of technological progress.” What do you think some of these myths might be?

Despite the many progressive benefits of technology on society, the Forum hopes to explore the full scope of its impact. One of the myths that we are challenging is the idea that all technological progress is purely beneficial for society and culture. Having said that we are not claiming an anti-technological stance either! We are merely observing, analysing and discussing. Turi describes that saying: “Tech used to lag human: for all of history, we have imagined things that couldn’t be built. That may have inverted: we may not be able to conceive of what already exists. Most symposia that tackle the theme of technology believe in technology.

We know it exists. We just don’t worship it.”

A ‘manual usually refers to a set of instructions, do you think that this forum will be prescriptive? Who do you imagine would benefit from this ‘manual’?

More than a ‘manual’ the Forum is in fact, as Shumon calls it “a search engine” that “scans” overlooked inventions, intentions and innovations. The Global Art Forum has always attracted a wide range of audiences spanning the art world, that of technology and everything in between.

What happens with the research, talks, projects and ideas resulting from the Global Art Forum?

Talks, research, publications and projects from the Forum are collected and showcased during the fair in a media repository entitled ‘Forum Forum.’ This is also available yearlong as an online library on artdubai.ae. The video recordings of the talks are uploaded online right after the fair. We also rely on the media to attend, review and continue the discussion after the fair. Each year, the Forum sparks debate and we see it continue year-round.