In Conversation With El Anatsui

ARTsouthAFRICA’s founder and editor-in-chief, Brendon Bell-Roberts, in conversation with El Anatsui. This interview was published in full in the March Innovation Issue (13.3). 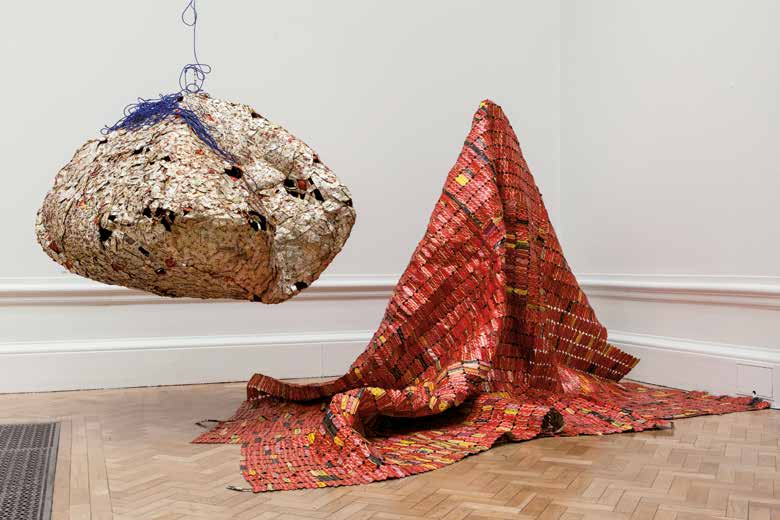 Emerging as an artist during the vibrant West African post-independence art movements of the 1960s and 1970s, Ghanaian Anatsui has gone on to receive international acclaim for his constantly evolving practice and highly experimental sculptures.

Brendon Bell-Roberts: Firstly, thank you for the interview; a number of us here are great fans of your work so it’s a real pleasure and an honour to chat with you.

I’d like to reference your previous show at the Brooklyn Museum last year and your current solo exhibition at October Gallery – some of the titles, like AG and BA, Timespace, and Testimonial sound very intriguing. Could you explain the titles and what they mean to you?

I know that generally you don’t like to explain your work, but the titles are quite mysterious and it would be great if you could share some of your insights with us.

El Anatsui: I think that explanations tend to stand in the way of people accessing the work; it inhibits them from going beyond what I have said. I don’t think works need titles, and on the occasions that I do give titles, I want to make them as flexible as possible. Rather than ending the journey, the titles should be extensions of the mystery, extensions of the freedom of interpretation that is inherent in artworks.

I frequently title the works in my own language – Ewe. It is a highly tonal language but most times it is written without tone marks, so a word has the possibility of carrying different meanings depending on the several inflections one gives it. It points to the notion of the nonabsolute and I think creative products like artworks are not absolute. Their interpretations cannot converge on or be directed by just a title.

Throughout your career you have explored an unusually wide range of media: from concrete, ceramics, tropical hardwoods, driftwood and discarded wooden mortars, and then later on, to found and re-purposed metals, including roofing materials, cassava graters, milktin lids, printing plates and, in your latest installations, aluminium bottle-tops. Could you give us some insight into the journey between the various media? How does the transition between the different media reflect your own personal journey through your artistic practice and career?

In art school, I had the chance to work with traditional sculpture media, but after I graduated I instinctively felt the need to rethink the media I worked with. The first material I was drawn to was the wooden trays commonly used in the market to display food. I found ready-made objects and intervened by pyroengraving signs or ideograms. I searched for, and found, the carvers who produced these trays and collaborated with them.

About four years later, I moved to Nigeria and so lost the services of these carvers. For the next five years, I worked with clay and produced the broken pots series.

Around this time, I was at an artist residency in the US, where I chanced upon the idea of exploring the chainsaw as a sculpture tool, so over the next two decades (and still) I work with this tool (and other motorised ones) on wood planks and other wooden objects, like old mortars, windows and doors.

I first discovered metal in the form of cassava graters. I was attracted to their perforations and various degrees and shades of rust. I explored the semi-transparency of its perforated nature to work on ideas of walls as human constructs that reveal more things to the imagination than they hide things from the eyes. I worked with milk tin tops before the liquor bottle caps introduced themselves and after working with them for a decade and a half, I realise that what seemed like a medium with a short run has kept engendering new possibilities and fresh ideas. In hindsight, I see a common thread that binds the media I have worked with over the years. They all have something to do with the nurturing nature of food – the trays, the pots, the mortars, and the bottle caps.

I grew up cut off from my indigenous culture – my early childhood was spent in the confines in a mission house, with church and school as my environment. Then the University Art School I attended was affiliated to a British one with a curriculum which had little or no local content. I remained unexposed to my artistic and cultural heritage.

Incidentally, the University happened to be in Kumasi, where the National Cultural Centre is located. Towards the end of my art school career I felt an increasing hunger for my indigenous culture so I would go to the centre on weekends to observe and interact with the artists and craftsmen and engage in many facets of arts – testing bronze and brass, woven and printed textile, music, poetry and drama. There I discovered this body of signs or ideograms which are normally printed on funeral cloths – each an encapsulation of proverbs or aphorisms.

After encountering these ideograms, I started working with them as a way of satisfying my hunger for local heritage. When I discovered these artworks, we had just finished learning about the European Renaissance in art school and the difference between the two approaches was resoundingly clear. One being more representative and figurative the other analytical and grappling with abstract ideas, the former more for the eyes and the latter more for the brain. Indigenous sources then led me to establish a root, from which to grow and to look around me for ideas, media and processes.

The relationship between traditional art forms and more modern practices is interesting. Are you aware of the digitally manipulated effect or impression in your work currently?

Initially, I wasn’t aware of this, and when I realised it, I thought it was by chance. However, upon reflection I think I have played with the idea of digitalisation in some of my earlier works, especially with woods and ceramics in which compositions consisted of almost similar units which could be permuted into new statements. The idea of the non-fixed form, the versatile form, the form that is shaped and reshaped from the same data, that’s always been there.

In light of this digital insight into the work, could you ever see yourself moving away from your purely handmade process to more technological, machine-based production of your artworks?

Earlier in my career, I was a puritan who believed that the artist should use their own hand to realise their ideas. Now, I work with many assistants, so I find that my role is gradually changing to idea-originator. Technology is a means of doing things easier, faster and probably in multiples. The manner in which work is realised does not take the authorship from me – it’s like an author having his manuscript digitally multiplied to reach wider audience.

Can you elaborate a little bit on the themes of sustainability, regeneration and transformation in your work?

I think my practice is a reflection of all those things. Painters have complained to me about the cost of oil colours and I say to them, “Well, if that’s something that affects the sustainability of your practice, then why not look closely around. Colour is not only in tubes, colour is in everything that you see.” I think that’s what I do; I look for things that are immediately available, thereby sustaining my practice. In my practice, I transform the media; I give them a new lease on life.

The ideas that I work with speak directly to the idea of regeneration. For example, the time I worked with clay and broken pots – I used the idea of the pot as my point of departure, demonstrating that when a pot breaks, it is not the end of its life. Rather, it is the beginning of a new cycle of life, allowing it more uses than when it was whole.

My processes are rather basic too, very much a part of everyday life. Working with bottle caps requires the most rudimentary of means; to the point where you can use only your hands. There are people who work with other equipment, tools that leave them at the mercy of factors not under their control. My practice is sustained because it uses that which is not too far from human activities and actions.

Speaking of sustainability and the coming together of different elements, I don’t know if you’re aware, but ARTsouthAFRICA is launching its own art fair in Cape Town called THAT ART FAIR. The focus is to build new audiences and give young artists from all over the continent an opportunity to showcase their work in an affordable, accessible environment. In your opinion, what is the role of art fairs like THAT ART FAIR in relation to traditional gallery spaces and the new trend of bringing art to the people and presenting art in a more public and unconventional way?

If THAT ART FAIR is as you describe it, then the marked difference between it and the mega art fairs is that it will give a voice and visibility to artists who would have been excluded from the latter because they are not regarded as established, with big galleries or ‘selling.’ The model is very much like the approach to art production, dissemination and consumption in most cultures in traditional Africa where the public is very much involved and barriers are not put in front of anybody who has a creative input to make.

That is a very astute comparison. Do you have any other thoughts with regard to young artists and practitioners – what is your opinion on the state of development on the continent?

Until recently, I had been concentrating on my studio work and hadn’t seen much of younger artists. Then, for two consecutive years I had the opportunity to head a jury for a national competition, so I have developed a deeper awareness of what is happening on the scene with younger artists. An interesting and welcome feature is the emergence of young artists coming into the practice from many different disciplines. Disciplines that until recently were not regarded as related to art such as engineering, chemistry and mathematics.

Their backgrounds are feeding into their practice, opening up new and interesting vistas of approaching old themes or subjects. These works present transit points, undoing any stasis in the system – which shows great promise for the growth of art on the continent.