The Innovation Issue (13.3): In Conversation With Jean Katambayi Mukendi

Jean Katambayi Mukendi (living and working in Lubumbashi, DRC) creates fragile and complex installations out of the recycled materials that immediately surround him, intrinsically speaking of his social environment. Both artist and scientist (Mukendi studied mathematics), his works are simultaneously informed by a pregnant materiality and precise algorithms and geometry revealing larger circuits of global and local economic and political structures.

ARTsouthAFRICA spoke to him about his practice and his participation in the ‘Rare Earth’ exhibition at Thyssen-Bornemisza Art Contemporary in Vienna. This interview appeared in full in the Innovation Issue (13.3). 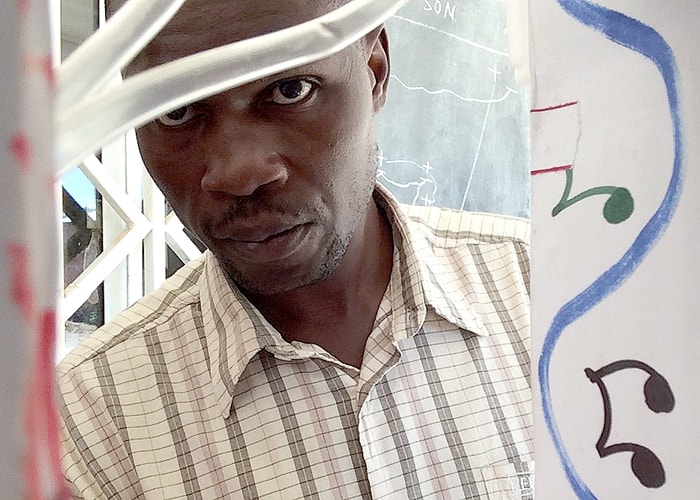 Jean Katambayi Mukendi: My interest in art started when I was a child. At a very early age I asked myself about the future of our society, which was patterned and programmed by colonial policies. Everything, from the fields of education, eating and energy, was timed precisely to a siren.

The culture of technology forms a primary theme in your work – how did you become so fascinated with energy and electricity?

My father was born in a small village in the centre of Congo where he lived until migrating to the mining south, where he became skilled in technology, electricity in particular. My family all enjoyed the same technological schooling, motivated by both my parents. I also grew up in a city next to a big plant, where everything was programmed from morning until night – from schooling, eating, leisure time – according to a schedule, timed by a siren. I asked myself about this energy that was useful, but also threatening, and my answer came from fusing the cardboard techniques I learnt from my mother with the technological aspects I learnt from my father.

It’s obvious that your background in Lubumbashi, ‘The Capital of Copper,’ has become integral to your work, but how would you say that your environment continues to influence your practice?

Of course, my environment keeps on influencing my work because of the discrepancy between the potential of this copper capital and its economic and cultural dynamic.

Lubumbashi is a city threatened by the fear of living. Opportunities for cultural exchange are slowly vanishing; citizens find shelter in selfish corporations devoid of real impact on sustainable development. My work is a reaction to an action that tries to refocus landmarks and synchronicity at human level, and therefore, economy, policies, social issues and philosophy at their point of judgment and logic.

The most recent showcase of your work is in an exhibition titled ‘Rare Earth’ at Thyssen-Bornemisza Art Contemporary in Vienna. What is your understanding of the term ‘rare earth’? How is that understanding reflected in the work you are showing?

The word that is closer to the meaning of ‘rare earth,’ and which is common in our language, is ‘gem.’ I think the world has essentially the same problems within different contexts according to geography, history and culture. ‘Rare earth’ gathers people, thinkers and creators who communicate without knowing it, who bring humankind their questioning by using means of their own.

I realise I involved myself countlessly in my work, sometimes without understanding, at the disposal of mankind, and play the part of transmitter and receiver. This mechanism can evolve one way or the other and link very large distances. In physical terms, it signifies that my work has demonstrated its full spiritual dimension.

Your use of so-called ‘conflict minerals’ such as copper, reflects the regional conflict in your native country of Congo and speaks to the global scramble for its vast natural resources. Is there a particular message you are working to convey through this choice of materials?

My message is the following: If I put electricity and metal on cardboard, those who learnt these theories correctly are able to do better to balance the accounts of the cosmos. The teacher in my country (DRC) should stop preaching to his students that we are wealthy and that our riches are coveted, he should rather teach the student how to be autonomous. The world should take care to solve the situation of the other, but that’s an awkward request. I’d rather ask my contemporaries, “What shall we share with mankind?” Because the earth and substratum are not enough.

The majority of these minerals eventually end up in electronic devices (such as cell phones, portable music players, and computers) produced in Asia and sold to Western consumers. The profits from the illegal trade of such minerals enable the militias to acquire weapons and continue their campaign of violence against civilians in the Congo. Is the use of electrical mechanisms in your work a direct reference to this?

Yes, the minerals in the conflicts are not only coltan, which is used to manufacture phones, but also copper and uranium. When one investigates, one finds that the uranium used in the nuclear bombing of Hiroshima may have been Congolese. The mechanism in my work diverts the role of these metals to make them instruments of peace. It’s another matter entirely to define peace, which is more a state of mind. By peace, I mean the peace that is felt conjointly and automatically, quite different from a peace defined by an individual who has specific goals in his mind. The conclusion was that all the minor clashes observed in the world are springing from small social inconveniences. All conflicts, from local skirmishes to full-blown wars, have a raison d’être and demonstrate that we need the other to demonstrate that love still exists. The day when love is gone forever there will be the silence of death.

Having an interest in art and mathematics, your work is informed both by a loaded materiality and precise algorithms, revealing larger circuits of global economic and political structures.

The exhibition statement for ‘Rare Earth’ says that your work “explores ways to access alternative energy sources that do not rely on the multinational owned infrastructure” of countries like the Congo. How exactly do you achieve this? And do you think your work could be useful in effecting positive change?

I use algorithms that I conceived very early in my work – before I even studied maths at school. I later studied aimlessly without a proper curriculum because during the years of political upheavals the crisis was at its peak and we studied in order to get any qualification we could. At the time I did not know that nature could bring goodness to an individual without financial resources.

The idea of spending time and energy to build an algorithm represents a perfect simulation of the questioning that is ours on a political, social and economic level. The proof of these algorithms is simple but contrasted. If I discuss with my contemporaries on public transport or any other topic whatever their intellectual background, I am always regarded as a philosopher of an extraterrestrial age yet to come, and I jump for joy because my message has been understood and my work participates in positive change.

Lastly, your participation in the 2014 Dak’ Art Biennale saw you working alongside established artists, such as Wangechi Mutu and Emeka Ogboh, whose work we are all familiar with. Are there any emerging contemporary artists from Africa that you admire? Anyone you would like to see yourself working with in the future?

Near me in Lubumbashi, I can name Richard Kaumba who uses his small studio to introduce an architecture of surprising dimensions, composed of parts fitting into each other. In Kinshasa there is Papa Kingleze, who is enthusiastic about ‘dream cities’ that make him forever young.

On the opposite side of Africa, in Johannesburg, there is Vaughn de Vansa, who builds electric installations that are very original. I have known Driss, the Dak’ Art 2014 laureate, for a long time. His paintings in the shape of architecture draw you in from different aspects.

Besides, my work can be combined with any work of any other artist. As Amar Bouras says, “The work is just a pretext.”