The Innovation Issue (13.3): Andrew Lamprecht In Conversation With Kendell Geers

Well known as the enfant terrible of South African art, Brussels-based conceptual artists Kendell Geers hardly needs any introduction. Andrew Lamprecht, senior lecturer at Michaelis School of Fine Art (UCT) and Guest Editor for ARTsouthAFRICA 13.2, spoke with Geers about his 2014 solo exhibition, ‘AniMystikAktivist,’ at the Goodman Gallery, Cape Town (13 December 2014 – 17 JAnuary 2015). This interview was published in full in the March Issue of ARTsouthAFRICA 13.3. 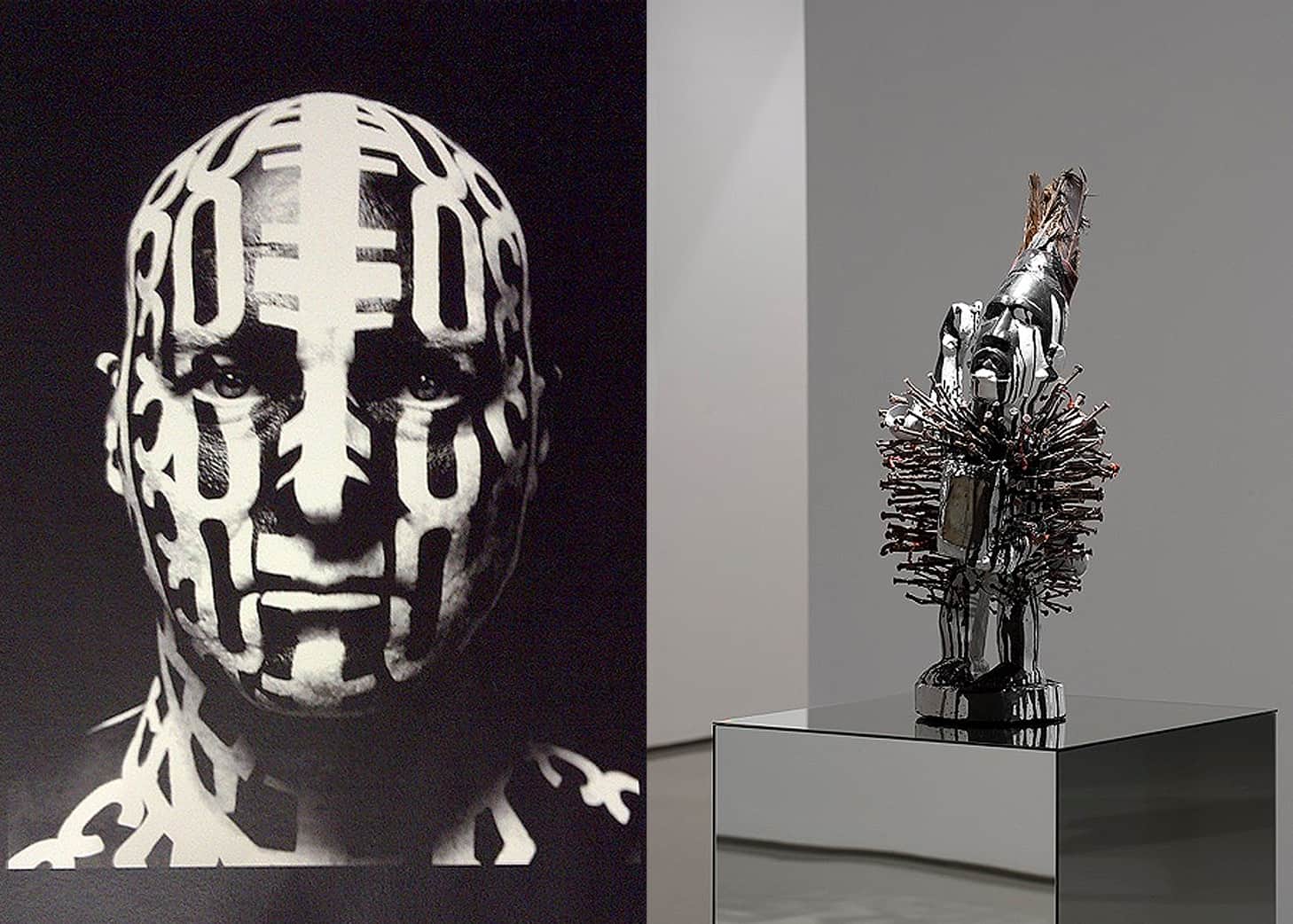 Andrew Lamprecht: I want to talk to you about alchemy and the transmutation of form in this exhibition. None of your exhibitions, as far as I know, are major shifts from one thing to another – you’ve been on a constant trajectory – but what I’ve noticed here is that the theme of violence, which has always pervaded your work, seems to have transformed into something that is healing. Would I be right in saying that?

Kendell Geers: Well, that’s a very complicated question. The question of identifying artists by some form of branding is something that has evaded the reading of my work. I am not producing the same aesthetic over and over again ad nauseam because I don’t believe that the work of art is located in the form but rather created from energy. For me, art is very much located in the will.

Of course, growing up in Apartheid South Africa is where my roots lie, in the times of the struggle. In those final two years before Mandela was released, 1988 to 1990, I was very militant, making anti-apartheid silkscreens and posters for the End Conscription Campaign. This was very much an example of using culture as a weapon of the struggle but it was, of course, propaganda. The cultural politics of it, however, very much infused and infected how I thought, and continue to think, about art.

Life changed a lot after the fall of Apartheid because we were no longer fighting the state but a different kind of monster – the monster of transformation. What could the new South Africa be? I was very utopian and very engaged, still believing in politics, still believing that democracy would win over corruption, still believing that “the doors of learning and culture shall be opened.” They were not opened and have since been slammed shut and hermetically sealed.

A major shift took place sometime in 2000 when I decided to take a year-long break from making art. I started to reconfigure my idea of art as being less about politics and more a political reading of the being. Through this process, my approach shifted to something much more animistic. I began to think about the work of art as an embodiment of will with its own embodied spirit. It opened up a whole new way for me to work and in conceiving of what I was creating.

Regarding activism, you say you ceased to be interested in politics in the traditional sense, yet your work has always been political. Materials are often political, and I am curious about the tools that you are using here, referring not only to wood and paint and found objects but also to language.

There are number of different works on show – every work is a text in some way or another. For Your Eyes Only is the largest work, setting the tone for the rest of the show as words manifesting in various ways throughout.

The most abstract manifestation is the Nkisi figures. They are actual ritualised Congo fetish figures that have been white washed with gesso, an ancient primer that has been used since the time of Leonardo. What really fascinates me about the Nkisi figures is that the Congo was the first country in Africa to be Christianised by the kings following Vasco de Gama’s historical visit.

Here you have a Christianised African country, and, being animistic, they freely interpreted the ways in which Christianity manifested. Instead of having Jesus nailed to a wooden cross, they took the idea of the suffering and guilt and created the Nkisi figures. The nails, made of expensive iron, were licked and hammered into the wooden figure in a ritual communication with their ancestors and syncretic Christian spirits.

This is a completely different reading of the Nkisi figures as actually being Christian symbols. We try to pretend that they’re not because we want them to be exotic, because we want them to be untainted by Europe. So I take the classic African stereotype, the European stereotype of ‘African Art’ and whitewash it with gesso so that it takes on a European patina and then baptise it with Indian ink. Strangely, it’s called Indian in English and in French it’s Chinese.

In contemporary literary theory a lot of African and Indian theorists were accused of being deliberately obfuscatory. They wrote in a way that was inaccessible, so the argument goes, in order to make the reader read more carefully. Your works are not always presented on a literal level. While they aren’t immediately readable, they demand engagement with you. Is this a strategy to force the viewer/reader to look more carefully?

I don’t make my works more complicated for the reading; I try to simplify everything down to the barest minimum. People have a choice to take the first-degree reading or try to get beneath the skin of simplicity to see the intention. From the very beginning, a lot of people have found this disconcerting because they take one look and say, “Anybody could have done that!”

There is the temptation to take the easy option and see only the material forms. If you look at each of my works individually you will never get it; you need to see the spiral that links what I am doing now with my very first works. 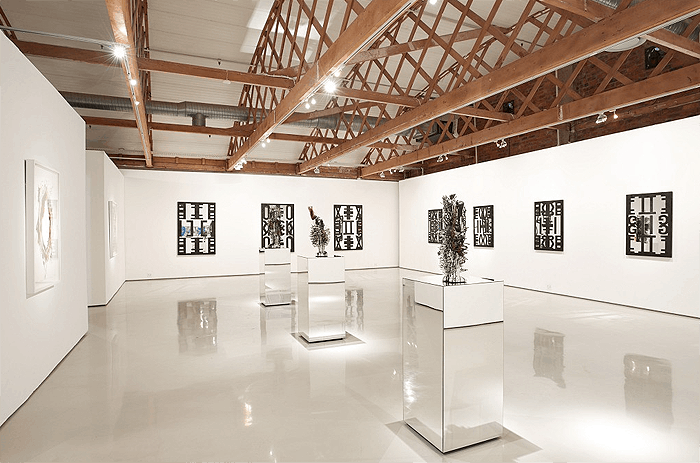 And transformation of the previously pervasive theme of violence in your work into something that appears to be healing?

Yes. I realised during apartheid that South Africa was not going to change through passive means. It needed the AK47 because the only the way that people listen is through forms of violence. Back then, I tried to use symbolic violence to affect change. This continues through my work today, but it’s transformed into a baptism by fire, a spiritual violence where one has to burn away the excess, burn away the fat of comfort in order to expose something fragile, something transcendent. It’s only when you touch the nerve that the corpse reacts with a jerk in the twitches of change. It is only through violence that we will be able to transform because, tragically, our natural state of being is to follow the path of least resistance.

A culture of change; I like that. This exhibition is, as with so many others, about a right of passage that you facilitate – leading a person along a path, whether spiritual, intellectual or political. Your work is deadly serious, but sometimes I feel there is also an irreverent side to it. You play the role of jester as well.

Absolutely. I would say that the jester is my patron saint. The notion of the trickster is very much the guiding force in my work. Whether it is the Greek Hermes, Egyptian Thoth or Native American Coyote, the Trickster’s gift to us is language. I am deeply fascinated by the idea of language because it is not just the written word but also any form of habit or social pattern.

I think that the role of the trickster is to give and take. You need to have points of contact and points of resistance. Humour is a great form of resistance. I use humour in my work, but it is not a ‘Monty Python’ humour; its dark humour, it’s a cutting humour.

It’s humour at your expense.

Yes, it is at my own personal expense because I learnt very early on to deeply respect the viewer and never take them for an idiot. I would never for instance make art about the art system because that’s an easy target. The ultimate cardinal sin of contemporary art is cynicism, art about art in an ironic pastiche about the market. That’s just a copout. I’m more like the court jester who tells the truth whilst the audience throws rotten tomatoes at him.

It’s also holding a mirror up to the audience.

The mirror was something that I resisted in the beginning because it didn’t fit in with the ways I wanted to work. My fascination began with the traditions of seeking contact with other worlds in a shamanic process. The mirror is incidentally also a very common element of Nkisi figures, a trans-cultural way to speak to the ancestors. It is a way to access the world of spirits and other dimensional beings. The greatest shamanic story that you can read, complete with all the shamanic elements and the trickster leading the way, is Alice in Wonderland

If we go back to the question about politics – from the very beginning I have always believed that art should be political, but never judgemental. I have huge problems with artists who reduce politics to announcing who they are voting for. That is propaganda –  it’s not real politics. From the beginning, my idea of politics was to create an ambiguity, a complicated morality. By entering into the work of art, the viewer participates by making a good/ bad decision. Good/bad aesthetics. Good/bad morality. You are put into a position where your politics have to manifest in order to read the work by deciding whether it is a good thing or a bad thing, beautiful or ugly.

You’re right; it can go either way, but I hope that it opens questions about the construction of the art world, the bad habit of thinking about artists as producers, galleries as distributers, and collectors as consumers. That is not how I see my work and it’s certainly not how I conceive of art; I don’t make art for collectors, I make art for people. I am as respectful of the people installing the work as of the collector buying the work or the student coming in just to have a free beer.

Your work is located at the intersection between an African and a European context, and I want to ask you about the specific context of this exhibition, showing in South Africa rather than in Europe. What does this exhibition mean in this context? Your audience presumably comes from a different set of experiences than they would in Paris or London.

Well, I need to go back to this idea of radical subjectivity and say I am human and I have emotions and feelings and needs and desires and ambitions like everybody else. Tragically, I still have this bloody curse of being an enfant terrible. People still think of me as the bad boy of South Africa. They still want to see shock and scandal, which was never something I set out to do. I guess by my standards this is a very quiet exhibition, a very sober exhibition. I’m hoping that South Africa will give me a break – try to respect the work for its maturity and let me grow up and act my age. I’m almost fifty now you know; stop forcing me to be twenty!