The Innovation Issue (13.3): In Conversation With Tazneem Wentzel of Burning Museum

in News Articles 2013
Share on facebook
Share on twitter
Share on email
Share on whatsapp
Tazneem Wentzel is one of the founding members of Burning Museum, a multidisciplinary art collective based in Cape Town, South Africa. Naz Cuguoglu, writer and coordinator of maumau art residency in Istanbul, spoke with Wentzel about Burning Museum, her time in the residency programme, and the differences and similarities she identified as a South African in Turkey. This interview appeared in full in the April Issue of ARTsouthAFRICA’s Digital Edition. 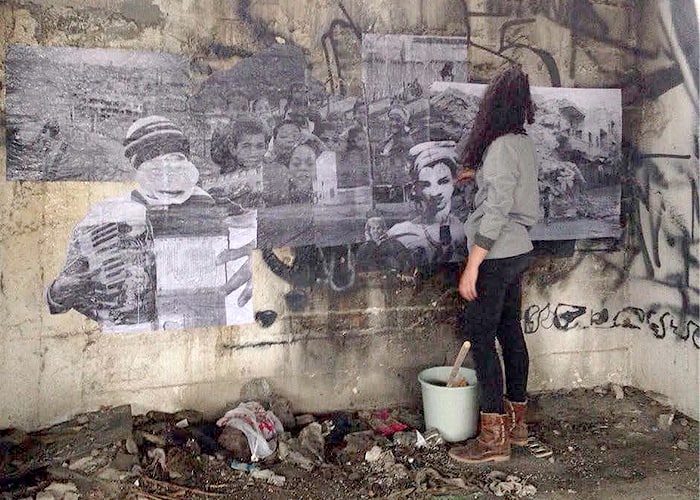 ABOVE: Tazneem Wentzel from Burning Museum installing construction in Maltepe, Istanbul as part of a pop-up street art festival. A collage of images from Cape Town and Syria. Photograph courtesy of the artist.

Naz Cuguoglu: Can you tell us a bit about yourself? Who is Tazneem and what does she do?

Tazneem Wentzel: I tend to do different things that don’t always fall very neatly into one box. I would describe myself as a horizon-explorer who believes in mermaids. Sometimes I write, sometimes I do visual art. Mostly, I like to reimagine public space.

You also co-founded the multidisciplinary art collective, Burning Museum. What were the motivations behind this idea? What have you been doing as a collective?

Connecting with the rest of the group was a very strange process. Grant approached me with the idea of working on something, but we weren’t quite sure what we wanted to work on. We met regularly at the District 6 Museum (in Cape Town) and began to realise that we all shared a similar historical narrative of displacement, connection and disconnection to the city. We were in the ideal space to think about these themes, and subsequently began working on using the archival images that lay around us for the wheat pastes. We enlarged the images and started putting them up. People enjoyed seeing them on streets, but we had some issues with the archive in terms of asking permission. Eventually this was sorted out and we continued working on using the archive and our shared histories as the creative trajectory.

The District 6 Museum is a very important entity in Cape Town. You also had a chance to intern there. Can you tell us more about what The District 6 museum does?

I had the privilege of finding a second home at The District 6 Museum. I started out working through their archive, going through the catalogues, looking at old photographs, watching videos, and listening to music. This process really helped me shape my perspective on researching. I also learnt a lot from the staff, I listened to their conversations with people and now carry those with me in the work that I do. 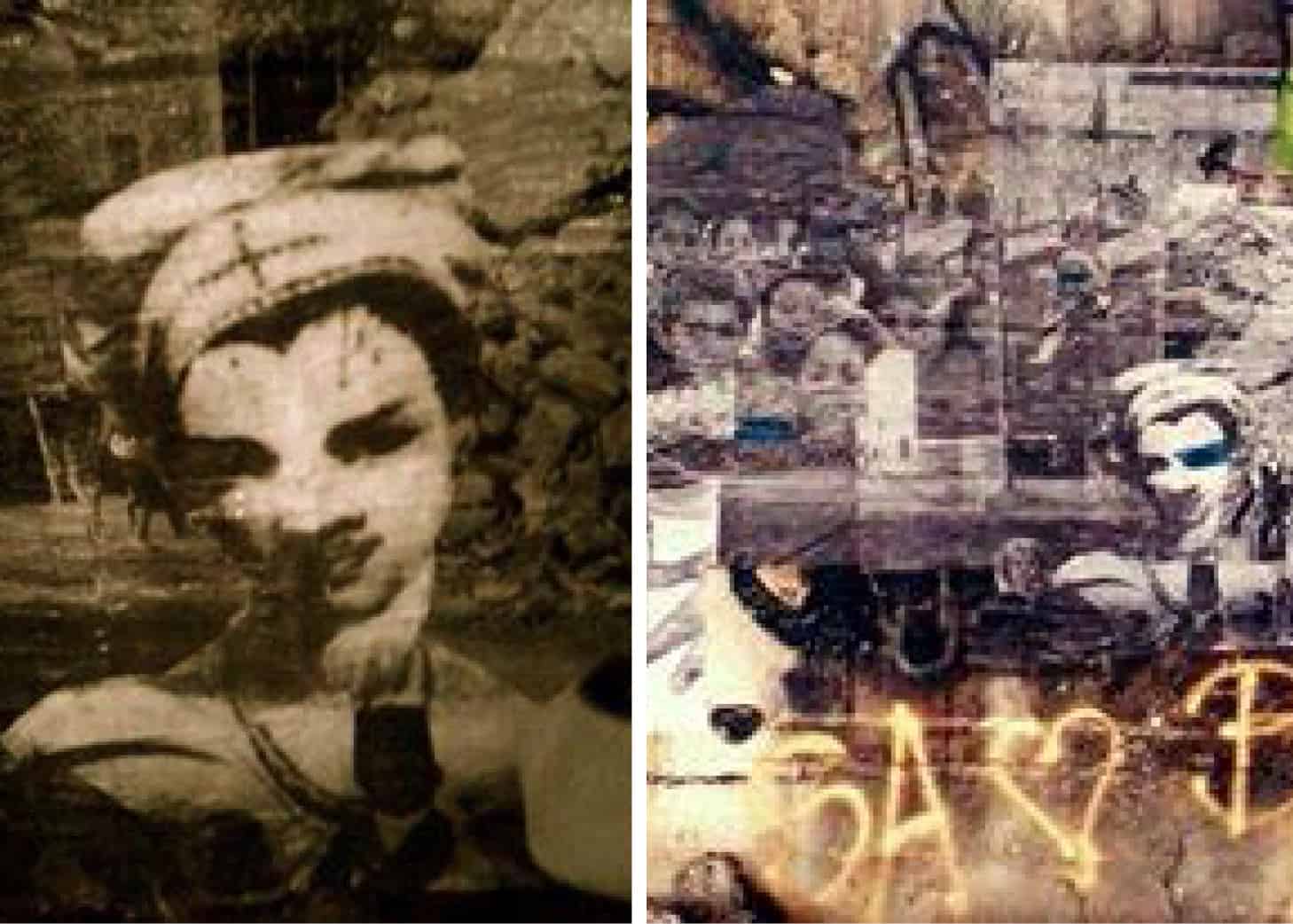 LEFT TO RIGHT: Close up image of a historically important indigenous woman from Cape Town, Kratoa; Constuction installed in Maltepe, Istanbul. Images courtesy of the artist.

Art residencies seem very important for your career as an artist. You are currently a resident artist at Greatmore Studios (in Cape Town). Can you tell us about your experiences there?

As we began to make more work as Burning Museum, Greatmore asked us if we would be interested in a studio. Obviously, we were interested – Greatmore is a very special place, one that became our second homes. It’s a safe space for all those crazy ideas to take shape.

You also attended maumau art residency in Istanbul recently. How did the Istanbul art scene and being an artist-in-residence there affect your art practice?

Istanbul is completely different from South Africa, yet there are some strange political similarities. It would be interesting to do a comparison between the Gezi protests and the Marikana Massacre, between Erdogan’s and Zuma’s ‘palaces.’ I was able to attend exhibitions very often in Istanbul and therefore had the opportunity to observe the way the gallery spaces work in Istanbul, and the support and the culture that surround them. One exhibition that I was very impressed with was Akram Zaatari’s exhibition at SALT (an important art institution in Istanbul.) He is Lebanese and worked with an Israeli pilot who chose to stand against civilian bombing in Lebanon. His style and the use of multimedia are really powerful and inspiring for my own work.

In what way did it inspire your own work? Did you make a lot of work in Istanbul? What did you do?

I did. The space is really creatively fertile. On the one hand, there is the beauty and the history of Istanbul. On the other, there are the present tensions between refugees and citizens, between conservatism and liberalism. Coming for a South African context, I found people’s ways of struggling to negotiate their own boundaries very interesting. I also love collaborating. When I arrived in Istanbul I knew I wanted to put some of Burning Museum’s works up. So, I went around asking people who organised the graffiti festival in Istanbul about obtaining permissions. We spoke and made it happen. I ended up collaborating with a Syrian filmmaker, Kaiser Nahas. The conversations about Syria, South Africa, and Turkey turned out to be as interesting as the collage that we put up.

How would you compare and contrast the art scene in South Africa and in Turkey? Were there any similarities or differences?

I think the scale of the ‘art’ scene is different. I am from Cape Town, and there are always a number of exhibitions happening, but not as many as in Istanbul. I think this has to do with the number of galleries and the private funding available for artists. However, I do feel that I attended a lot of not-qualified-enough exhibitions in Istanbul. Quantity doesn’t necessarily mean quality. The one thing that I did notice was the kind of creativity that goes into developing other kinds of products related to the artwork. For example, as a gallery, what Mixer was doing in terms of their exhibition catalogues was very impressive. That is something that hasn’t really been developed in Cape Town.

Another residency you took part in was Joule City Incubator: African Knowledge Incubator Graduate Development Programme. What was your role in that project?

We developed a research-based project called Artists on Africa. Each of us had to research artists from all over Africa and think of ways for creating a conversation with these individuals from different countries. Then, we developed the idea of doing some posters with quotes from the interviews to promote the podcasts and the videos. You can also listen to them:

Do you have any future plans?

The question is: ‘Does the future have plans about me?’

Naz Cuguoglu (1989, Istanbul) finished her undergraduate studies in the psychology department of Koc University, Istanbul. She is a freelance writer and works as the coordinator at maumau art residency in Istanbul, Turkey (www.maumauworks.com)