in News Articles 2013
Share on facebook
Share on twitter
Share on email
Share on whatsapp
ARTsouthAFRICA 13.1 is the ‘Interview Issue.’ In it, we engage in conversation with a number of carefully selected artists, curators, writers and organisations who we know are truly committed to transformation, to changing perceptions about contemporary African art practice, and promoting the integration of communities that might otherwise not be exposed to the wealth of talent from the continent and the ways in which art can change lives. We published a number of excerpts and now present the full interview with Garth Walker, who is widely regarded as the pioneer of post-1994 South African-rooted graphic design. 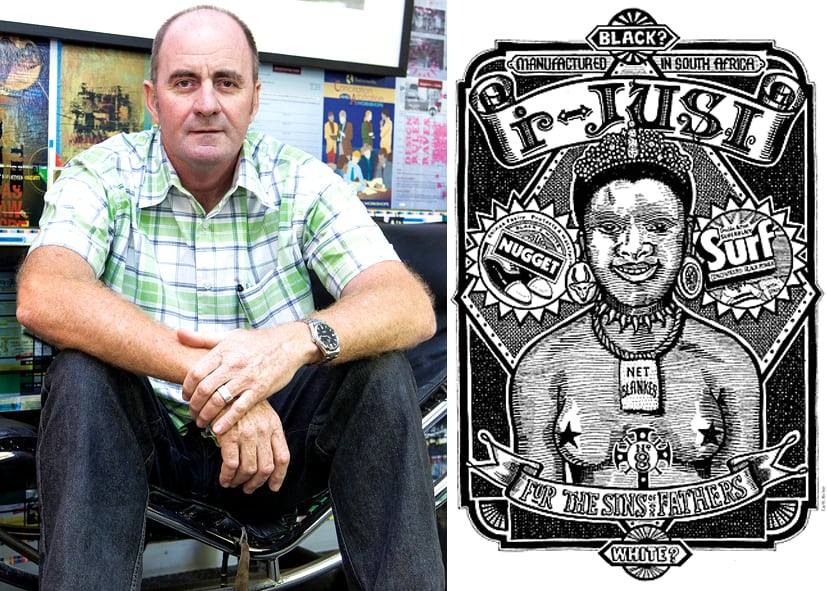 LEFT TO RIGHT: Garth Walker, image courtesy of the artist, magazine cover for ISSUE #8: The Black & White Issue (1999)
Is there such a thing as ‘African Art’?

Art is art. So, ‘African Art’ is a label used by non-Africans. The same applies to French Art or British Art. The tag could apply to “art produced by a British / French national”, meaning that South African art is created by a local national – as would be Burundian or Nigerian art… An African artist can call him/ herself such by being of or from the continent of Africa, but these labels are only useful when describing geography. Applying it to art, as art, is definitely not valid anymore.

Africa is a new economic frontier where young people are shaping Africa’s future. What do they want to see, hear and read that will inspire them to embrace African arts and culture?

It can be argued that Africa’s time is now. How do we prepare to take full advantage of the opportunities that are constantly unfolding in front of us. More importantly how does the African contemporary art establishment position itself to emerge as a ‘global player’ whose voice can be heard and respected?

As I have been doing this for a while, I’m not going to change much, other than just ‘carry on doing it’.

I think some African practicing artists have an inflated view of their place in the global art world –usually when they attempt to meld ‘Africa’ with ‘contemporary global art themes’. The result is often neither original nor good art

Is a new trans national ‘African art dialogue’ needed to foreground the various conversations, challenges and successes from other African centers of culture and thinking?

The dialogue needs to be about ‘’artists talking about and sharing art”, as artists everywhere have always done. Nothing formal or academic is needed (in my view). The killer is when art academics enter the fray.

If Africa can leave behind its idea of Africa as a geography, or as a post colonial reaction, or as being defined by blackness, can it then be defined rather as a new dynamic energy?

Africa as ‘black’ is now boring and tiresome. One is African by birth or adoption (living ones life in Africa). The new energy is not defined by skin colour, although many black art academics/critics seem to think that only they have the right to apply these labels.

The young always inherit the earth

I’m a huge fan of both ‘bad historical precedents’ and ‘pigeonholing’ in my graphic design. There are no scared cows!

I’d be amazed if I lived to see the day.

‘African Art’ is best when it stimulates social comment about the ‘sacred cows’ (race, religion, corruption, politics etc.) If art could be seen to transform our society, in even some small way, then we will have succeeded

As the old ideas of North and South – East and West deconstruct, what approaches will be reflected through its art practice and discourse?

Any African who makes art for either personal or public appreciation – I generally refer to the ‘ordinary man’ in the street.

Is there anything else you would like to add that hasn’t been covered in these questions?

I’m just a graphic designer (I leave art to others).

ARTsouthAFRICA magazine is available at leading and niche bookstores in South Africa and via subscription for international distribution. Subscribe now and receive a 20% discount (offer valid until 30 September 2014.)

ARTsouthAFRICA digital is available monthly on our app.  Download the app for Apple or for Android and receive a complimentary three month subscription!