in News Articles 2013
Share on facebook
Share on twitter
Share on email
Share on whatsapp
ARTsouthAFRICA 13.1 is the ‘Interview Issue.’ In it, we engage in conversation with a number of carefully selected artists, curators, writers and organisations who we know are truly committed to transformation, to changing perceptions about contemporary African art practice, and promoting the integration of communities that might otherwise not be exposed to the wealth of talent from the continent and the ways in which art can change lives. This is the conversation piece we published with the infamous South African conceptual artist, Kendell Geers. 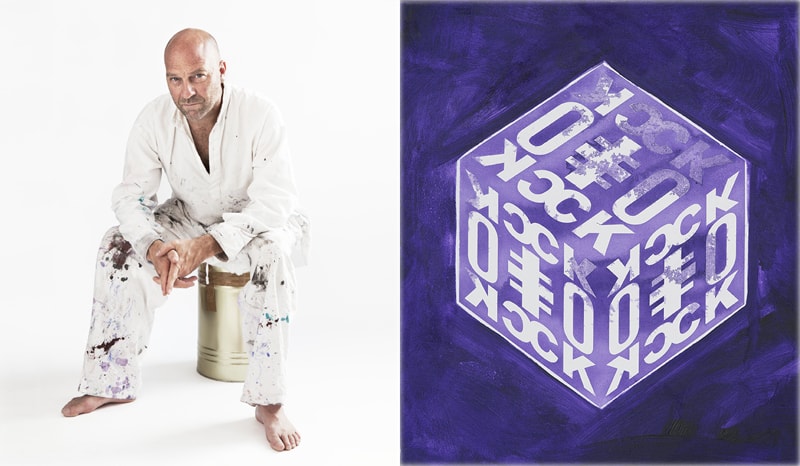 LEFT TO RIGHT: Photograph of the artist by Lydie Nesvadba and Post Pop Pangyrik by Kendell Geers (2013)
The very earliest European maps depicted a simplified view of the world, consisting of Europe, Asia and Libya divided by the Mediterranean Sea, the Nile River and the Black Sea flowing out from the Phasis River. Apart from the misguided notion that the world was flat, the map certainly illustrated the fact that from the very earliest image of the world, Africa (Libya) was an integral and essential component of the European imagination and worldview. Centuries before that, Pliny the Elder fondly noted “ex Africa semper aliquid novi,” being, “always something new coming out of Africa.” In his book, ‘The Natural History’, he mentions, amongst other interesting facts, the existence of white skinned African tribes. Long before Pliny, the Egyptians created art, architecture and a sophisticated culture with a religious worldview that is unparalleled even to this day; the world’s most impressive and mythical library was said to be in Alexandria. Moreover, it is no secret that the origin of humankind began in Southern Africa and then moved north. So why is it that we are still asking this question about Africa and its identity as if it is something that still needs to be determined and then justified?

The Europe versus Africa question is very tired and relies on clichés and insecurity in order to pass. I have witnessed way too many contemporary African artists claim that Picasso stole his language from Africa, and yet very few of those same artists could explain which ethnic group created the masks Picasso was quoting, much less understand their original religious or social function. The French would surely not get away with saying that Picasso “stole” his cubist ideas from Cezanne, so why do we even tolerate such a one- dimensional reading on our African continent? The sociological and cultural cliché that such a discussion demands is colonial to the core, for it reduces the long history of an entire continent to a graphic element based upon a European misreading of African masks.

It has long served the interests of a very few people, both African and others, to define the continent according to colonial parameters. Ever since the Berlin Conference of 1884, in which a few European countries drew up the borders for the entire African continent, the same European interests have been trying to determine and control what Africa can and cannot be. A handful of European and African curators, writers, historians and opportunists have taken it upon themselves to speak for a continent of at least 55 countries, set on controlling who and what gets to be ‘African’ or not.

The criteria by which Africa is understood rarely considers the African identity of Christiaan Barnard performing the world’s first open heart transplant in Cape Town, or Mark Shuttleworth, one of only two space tourists, or J.M. Coetzee, the only writer who ever won both the Nobel Prize for literature as well as the Pulitzer Prize; twice. Are Academy Award winner Charlize Theron, Interview Magazine editor Ingrid Sichy, and founder and curator of Performa festival Roselee Goldberg not African? William Kentridge and Marlene Dumas are amongst the highest priced and best-selling artists on the planet and both have very deep African roots.

There are those who may even argue that these are all white Africans and therefore do not count, but they would also conveniently forget that the most powerful person in the entire art world today is Okwui Enwezor. It is no secret that the ‘Documenta XI’ model in Kassel, the most important global showcase of international art, was conceived and born in Norwood, Johannesburg. Some may even suggest that Yinka Shonibare, Olabisi Silva, Adel Abessemed, Kader Attiah and Ghada Amer are not ‘African’ anymore on account of the fact that they no longer live on the continent. They will find every reason to ignore everything that does not fit into the image of Africa as an unsophisticated culture, unable to exist outside of a pre-literate, animistic and backward continent of Noble Savages. It should be added that this perception of animism is, not without coincidence, a very watered-down tourist reading of the deep, profoundly true mysteries of life; engaging with it demands more respect and attention than the gatekeepers and custodians have the strength or time for.

This conception and image of Africa and ‘Africanness’ that we are constantly being forced into a discussion about, has been way too influenced by the criteria laid down by people like André Magnin and Jean Pigozzi who, in putting together their collection, stated that African artists should be formally untrained, for any training at all would destroy their “natural talent.” Why are we still locked into a debate about Africa in racist terms that disqualify intelligence, excellence and vision in favour of racist fantasies?

The discussion surrounding “authentic” versus “inauthentic” African art grows out of the academic reading of classical African art, and seeps through every discussion of the contemporary. It is massively divisive to try to exclude the Arabic North and the White South as “inauthentic,” just as it would be blinkered to suggest that the classic Egyptian and Ethiopian traditions are more European than they are African. Such discussions are only possible if you accept the colonial borders drawn up in 1884 and buy into the European definitions of “authentic.” Is it not enough that you were born and raised in Africa in order to be considered African, and could any self-respecting artist even imagine creating an inauthentic work of art? Moreover, why should artists of colour be excluded from the discussion, when Kara Walker, David Hammons, Otolith Group, Steve Maqueen, Stan Douglas and Carrie Mae Weems are often even better versed in the African traditions than their continental counterparts?

No sooner does one take off from Johannesburg International Airport than one acquires the label ‘ex-South African’, as if one’s identity is something that may be discarded like an old set of clothes. This kind of xenophobia is a hangover from the apartheid era and is really nothing more than a rusty old nail that pins ones foot to the blood-red-soiled earth of our history.

Given the African diaspora, and given that today there is a South African emigrant or exile in just about every corner of the world, imagine the strength to be gained from embracing identity in an open-source manner rather than constantly drawing attention to our old apartheid inferiority complexes. Instead of looking for differences to define everything that we cannot be, it might be worth our effort to crawl out from beneath the laager wheels and embrace Africa as a continent large enough to support difference, contradiction and dissent. Why do we demand of ourselves to justify our continental identity when we are happy to accept that Europe, North and South America and Asia are vast continents inhabited by billions of people with different identities that need never be justified? Has any European artist ever been asked to define the authenticity of their European art?

I was thinking about your questions as I watched the FIFA world cup final, and thought about the irony that the German soccer team included players of Turkish as well as African descent (in addition to the blonde-hair-blue-eyes stereotype) yet nobody dared to ask any of them to prove how ‘German’ or ‘European’ they are. Why do we always try so damn hard to disqualify our artists with the non-discussion of identity by playing into the hands of the European goalkeepers of cultural politics? Is identity not something that we simply are and could not escape even if we tried?

The world has changed; cultural definitions and borders are constantly being called into question today as Nike, Adidas, Microsoft, Apple, Ikea, Nokia and Sony melt down every difference in sweatshops around the planet, in order to make us all walk, talk, look and think the same. Rather than a discussion about what makes contemporary African Art authentic or not, surely the more pressing issue is about the possible role that art can play in the age of global meltdown and spiritual bankruptcy?

Kendell Geers is a South African conceptual artist, living and working in Brussels, whose work is often seen as a response to horrid socio-political conditions. Using a wide variety of media, from painting to sculpture and installation, Geers layers materials as he layers ethical, aesthetical and spiritual questions. His work explores the boundaries of what is permissable and questions the most basic concepts of identity, power and language.