ARTsouthAFRICA 13.1 is the ‘Interview Issue.’ In it, we engage in conversation with a number of carefully selected artists, curators, writers and organisations who we know are truly committed to transformation, to changing perceptions about contemporary African art practice, and promoting the integration of communities that might otherwise not be exposed to the wealth of talent from the continent and the ways in which art can change lives. This is the full interview that we published with Simon Njami, the renowned curator, lecturer, art critic and novelist. 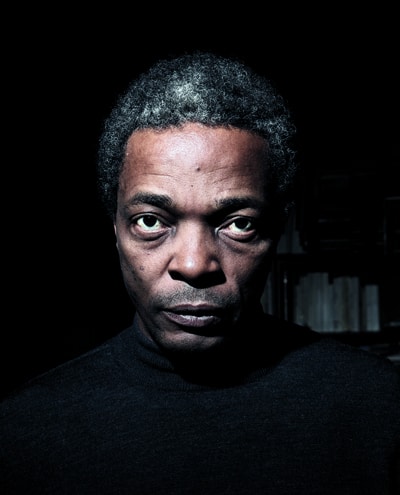 Photograph © David Damoison. Courtesy of Simon Njami.
Is there such a thing as ‘African art’ and does the label ‘African Art’ enable or limit artists from the continent? What qualifies an artist to call himself or herself an ‘African artist?’ Are the issues of labels and identity still valid?

There is no such a thing as ‘African Art’. Or, if there is, foreigners have labelled it and it mostly refers to what I call ‘classic art from Africa’ (wooden sculptures and masks, clay etc.). Nowadays, when we say Contemporary African Art, at least we know that we don’t mean much. We know that Africa is a vast continent with many different histories and practices, and that, even in the same country; it is not easy to find a common pattern that would suit everyone. If the term could be “art coming from Africa”, it might be less problematic. I consider myself an African, but I am quite sure that the African I am could not easily be defined or put in a box. Labels and identities are always valid because we are all coming from somewhere, and that origin partly informs what we do and the way we look at the world; but the issue is to avoid becoming trapped in a provenance we would not feel comfortable with. Everything, for me, comes down to definition. As long as we master our own vocabulary, there is nothing to fear.

There is a perception amongst some on the continent that South African contemporary art is more ‘Western’ than ‘African’. How do we bridge the divide geographically and culturally, between the North and the South?

South African is certainly not European. Maybe back in the day, when South Africans all thought they were Dutch painters, this could apply, but today it is irrelevant. I think that the problem, or the misunderstanding, mostly came from South African artists themselves. Not so long ago, they had no clue of what was happening on the continent, and that isolation led them to believe things that were inaccurate. And again, when we are talking about ‘South African artists’, who are we talking about exactly?

Is a new transnational ‘African Art’ dialogue needed to foreground the various conversations, challenges and successes from other African centres of culture and thinking?

It is obviously needed. When we started Revue Noire, for instance, the idea was to build bridges all over Africa; to make sure that somebody in Ethiopia would be able to see what was done in Senegal and realise that, even if the conditions may appear different, we are all dealing with the same issues of centrality and periphery. If Africans want to play a major role in the global circus, they have to create connections within the continent. It would be absurd for one country to believe that it can make it alone. We have to learn from other people’s experiences. These are questions that have been dealt with in many places, and an ongoing conversation is necessary.

If Africa can leave behind its idea of Africa as geography, or as a post-colonial reaction, or as being defined by blackness, can it then be defined rather as a new dynamic energy?

I don’t like newness. Why, all of sudden, should Africa be new? And what does a “dynamic energy” mean exactly? I do think that Africa is a metaphor for a lot of things that people are not aware of. That metaphor, in my view, is summarised in the word metamorphosis. Africa is speed and fluidity. We all know that the continent is not dark. But still, we could use the word to invest it with something else; we have been conceptually far too lazy.

Art is a language, and language, as Henri Delacroix, the French psychologist put it, is “the instrument that transforms a chaotic world of sensations into forms and representation”. This does not mean that everyone has to paint. They could sing, dance, write… But they have to understand that, like in any democracy, if you are not able to give a form to your thoughts or feelings, you will be unheard. On a global level, this applies to the continent. We cannot avoid the past. It is what makes us what we are. But we should not be its prisoner. It is just the basis from which we can invent the future.

We should first free our minds and stop trying to prove to the ‘other’ that we exist. It is a waste of time and prevents us from writing new narratives. It is a way of maintaining the colonial discourse as the one and only reference. There are a lot of stories out there that are still waiting for someone to tell them. This should be our major preoccupation.

What new stories of identity are revealed for Africa through its art?

Metamorphosis. Africa is probably the most hybrid place in the world. Even in Latin American or the Caribbean you don’t encounter that phenomenon. In the New World, displacement created hybridity. It was a fate, so to speak. In Africa, Africans had to invent new tools in order to adapt to the different changes. How many European languages are spoken on the continent? All of them, to which we have to add all the local languages. Only through the example of language, one can grasp the richness that the best artists are able to translate in their works.

It is art made by people who claim to be Africans.

It will represent what it is able to represent; the missing link, the part that the world misses in order to be complete. But it is up to the artists to understand that they have to come up with something strong; something that cannot be produced by an American, a European, an Asian.

I don’t like the term “provocation” for what it implies. Art, by definition, at least for me, is the vital reminder of any society. It opens paths of thoughts and practices that shake the established order. It is always one step ahead. That is why, at times, it might not be understood by its contemporaries. But, as Picasso put it once, art is not made to decorate walls. It is meant to pose what Ernst Bloch called the essential question: the question of the “we”. Who are we, how are we living, what do we feel, how are we going to live together… The answers to those questions might be problematic. But art, when it is honest and not uselessly polemic, shouldn’t be. It is always a proposition made by an individual.

As the old ideas of North and South / East and West deconstruct, what approaches will be reflected through its art practice and discourse?

What are you talking about? South Africa (South) and Morocco (North)? Ethiopia (East) and Senegal (West)? Those terms mean nothing to me and should be forgotten forever. Art is above all this ‘blah blah blah’.

As a confident transnational Africa emerges, what do we see as the most progressive approach that ‘African art’ can take and what does this approach represent and what new qualities does it possess and pose?

I don’t know if a confident transnational Africa is emerging. I can travel all over Europe without a visa, but to travel in Africa… We should get rid of wishful thinking and act. Art cannot be considered outside of the place it is produced. Infrastructures, political visions, for instance, are items we cannot do without. I wonder what the African Union is doing? This question should be addressed to them. Artists do not wait; they are greatly responsible of what you call ‘transnationality’. They have been building it, through their works, discoveries and collaborations. This is the only space where I can see a transnational Africa alive. It allows people, not only artists, but gallerists or writers, to think of themselves in a broader manner, within a larger ‘we’.

Are the current voices and media of today’s ‘art establishment’ still relevant? Are they able to capture the current zeitgeist? How should we be engaging the new generation to inject a sense of edginess into our discourse?

We don’t need ‘edginess’. We need intelligence. Which means, literally, to be able to understand. When Apollinaire was writing about the cubists, he was, in many ways, one of them. He could therefore translate what was happening from within. My feeling is that the media is far from the real action, and what they are dealing with only interests a handful of people who are not busy changing things but maintaining a bad status quo. When you mention ‘edginess,’ you fall into the trap of sensationalism. I would not trust someone who is seeking that. It is about time we try to make sense; to talk to people in a language that they would be able to invest in and share. The new generations don’t need us; we need them if we want to be able to think about the present and the future.

Simon Njami is the co-founder and editor-in-chief of Revue Noir, a journal of contemporary art from Africa. He has been the artistic director of the Bakamo photography biennale for ten years, and is currently the secretary of the specialised jury for the World Press Photography Awards. He is a novelist, curator, lecturer and art critic, currently living and working in Paris.

ARTsouthAFRICA magazine is available at leading and niche bookstores in South Africa and via subscription for international distribution. Subscribe now and receive a 20% discount (offer valid until 30 September 2014.)

ARTsouthAFRICA digital is available monthly on our app.  Download the app for Apple or for Android and receive a complimentary three month subscription!