The Javett Art Centre at the University of Pretoria

ART AFRICA spoke to Christopher Till

Over the past 4 decades, Christopher Till has been instrumental in spearheading the growth and development of numerous institutions and cultural events from Venice to Zimbabwe and in South Africa. ART AFRICA spoke with Christopher Till – currently directing the planning and development of the new Javett Art Centre at the University of Pretoria (Javett-UP). Till shared insights about the project and its vision to create a space where everybody can come to engage, through art, to explore and understand the creativity of this continent.

Rendering of the Javett-UP showing the Mapungubwe and Bridge Galleries. Courtesy of Pieter Mathews & Associates.

ART AFRICA: How did the establishment of the Javett-UP come about and tell us more about the Javett Foundation’s role and commitment to art development?

Christopher Till: The Javett-UP is a joint venture between the University of Pretoria and the Javett Foundation, which has been involved in education for many years. They have a family art collection and Michael Javett wanted to do something with the collection to make it more accessible, more available, for the broader public and academia to enjoy and learn from. One of Michaels’ advisors was Stephan Welz, founder of Stephan Welz and Co, and who is sadly no longer with us. Stephan had a contact at the University of Pretoria with Professor Antony Melck. They got talking about the possibility of doing a joint venture where the university would donate a piece of land and funding, and Michael Javett and the Javett Foundation would also make funding available in order to bring the project to fruition. Later I was brought in by Stephan Welz who asked if I would run the project, which I’ve been doing for the past two and a half almost three years. The building is erected on the south campus of the University of Pretoria, that’s the one closest to Johannesburg and connects it to the main campus by a bridge gallery that goes over Lynnwood Road. Underneath is a student gallery, which links the architecture and the visual arts departments. So it’s an ambitious initiative which marries a philanthropic relationship together with an academic institution, giving it a unique strength because of the academic foundation, enabling us to operate the institution in a professional, academic way. However, we have one foot firmly on the street, so to say, which is our commitment to engaging with the city and bringing people into the art environment. 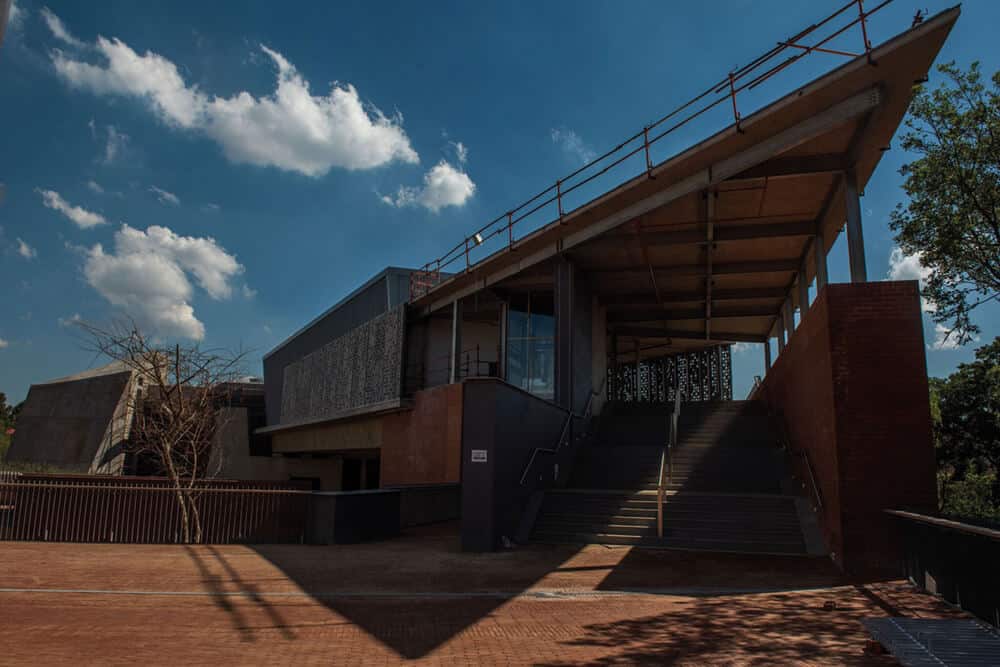 Entrance to the Javett-UP from the University of Pretoria’s Hatfield CWampus. Courtesy of the Javett Foundation. Photographer: Alet Pretorius

The objective was to have an opening exhibition which would appeal to the broader public but to also have an academic and curatorial construct which would fit within our aim and objectives for the centre. That objective is to look at what I describe as the artist as an educational beginning. We want to create an institution where the art of Africa is engaged with alongside research, its methodologies, its collection, and concerns. The inaugural exhibition will address all those objectives – it will be fit for enjoyment, it has an academic construct, and it falls within the identification of the art of Africa. What we have done is to invite arts institutions nominate works against a criteria, and not choosing popular works only, but works that intersect with the idea of turning moments in Southern African art, whether they be historical or political events, that they can reflect upon the sensibility of how South African art is being perceived then and how it is being perceived now. A list of potential works is being assembled and once completed we will make a final selection for the public exhibition.

The public will be able to engage with the works and effectively vote to see which works they adjudged to be most popular and significant. Readers should please keep an eye on the Javett-UP website and social media pages for details on this. 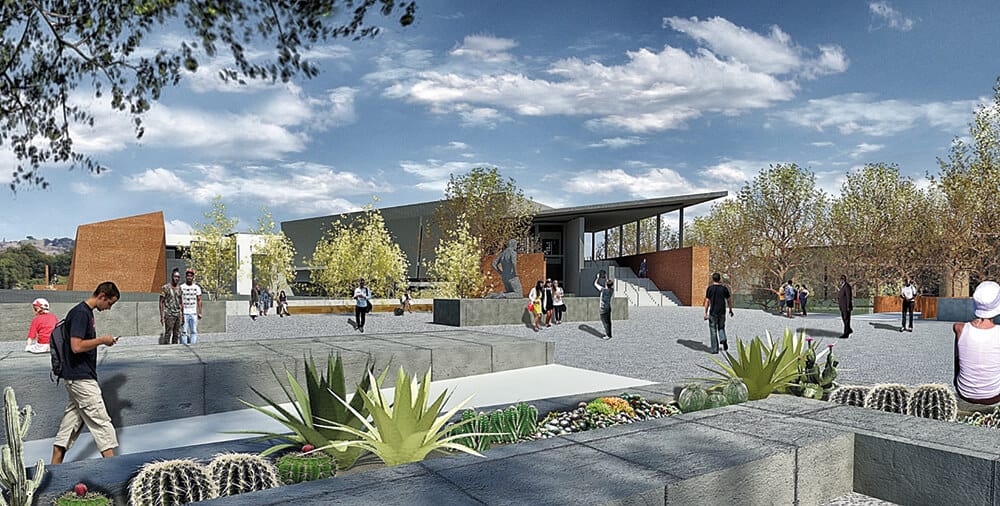 Rendering of Art Square at the Javett-UP. Courtesy of Pieter Mathews & Associates.

Besides the modern and contemporary collections, the museum will also house the treasures of Mapungubwe. Tell us about the institution’s focus on both art and cultural heritage – and the role you see these collections playing in highlighting the value of the arts for society in general, and for education in particular?

The Mapungubwe gold collection will be re-sited in a wing of the Javett-UP and I’m hoping to juxtapose that with the gold collection I exhibited in Cape Town at the Gold of Africa Museum. If you’re looking at the root of the historic narrative of creativity on the African continent, Mapungubwe gold is a significant example of that. We’ll be looking at the past, present, and future, so naturally the Mapungubwe gold collection will add that dimension to the education component for visitors to the institution to help them understand this historical narrative and why it is juxtaposed with all the additional activities. Our programming will also include artists in residence, which we are really looking forward to. We’ll also be integrated into a post-graduate Masters intangible heritage conservation which is being launched at the university this year. There will be a conservation studio in the building, and we’ll conduct some of the academic activities around that Masters. We have been engaging with university departments generally, in developing exhibitions which are multi-dimensional and transdisciplinary too. 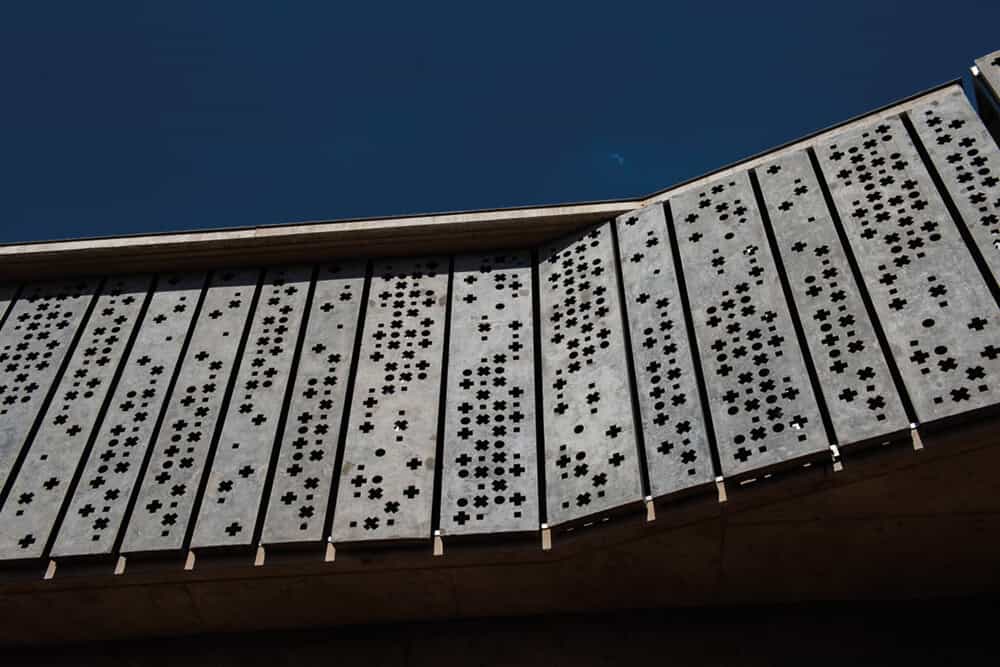 The Bridge. Courtesy of the Javett Foundation. Photographer: Alet Pretorius.

The Mapungubwe gallery is, along with the bridge, the commanding focal point of the Centre, towering into the sky and making it the dominant landmark in the area. What was the architectural thesis for this approach and what impact do you see the centre having in the city of Pretoria?

Pieter Mathews and Associates, a Pretoria-based architecture firm, designed the building and took this particular architectural formation from the rock formations you find around the Mapungubwe site – it’s quite an extraordinary space. There is a reference to the site of Mapungubwe and the rock formations there, to create this form which stands very visibly different – the whole structure is cast in concrete – juxtaposed against the rest of the nearby buildings. As you drive down Lynnwood Road it’s quite an iconic building and the bridge gallery that goes across Lynnwood road is also spectacular. It has become a visual emblem for Pretoria’s urban city landscape that is unmissable, and iconic. 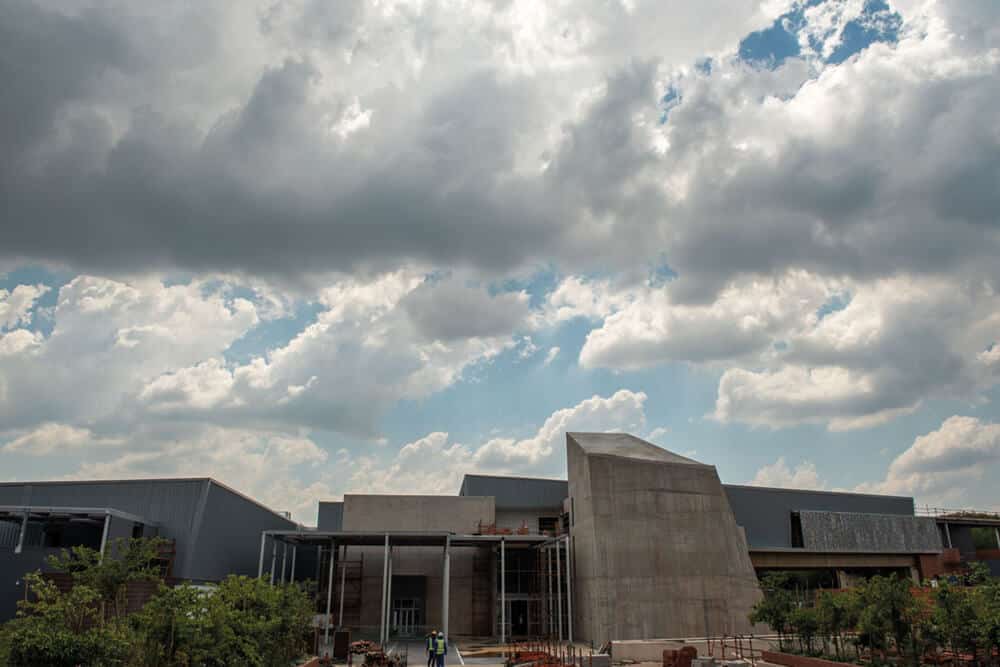