ART AFRICA spoke to the Zeitz MOCAA Assistant Curator Michaela Limberis about her exhibition ‘The Main Complaint’ which was opened to the public at the museum on 7 November 2018 and will run until 28 February 2019, Cape Town, South Africa. 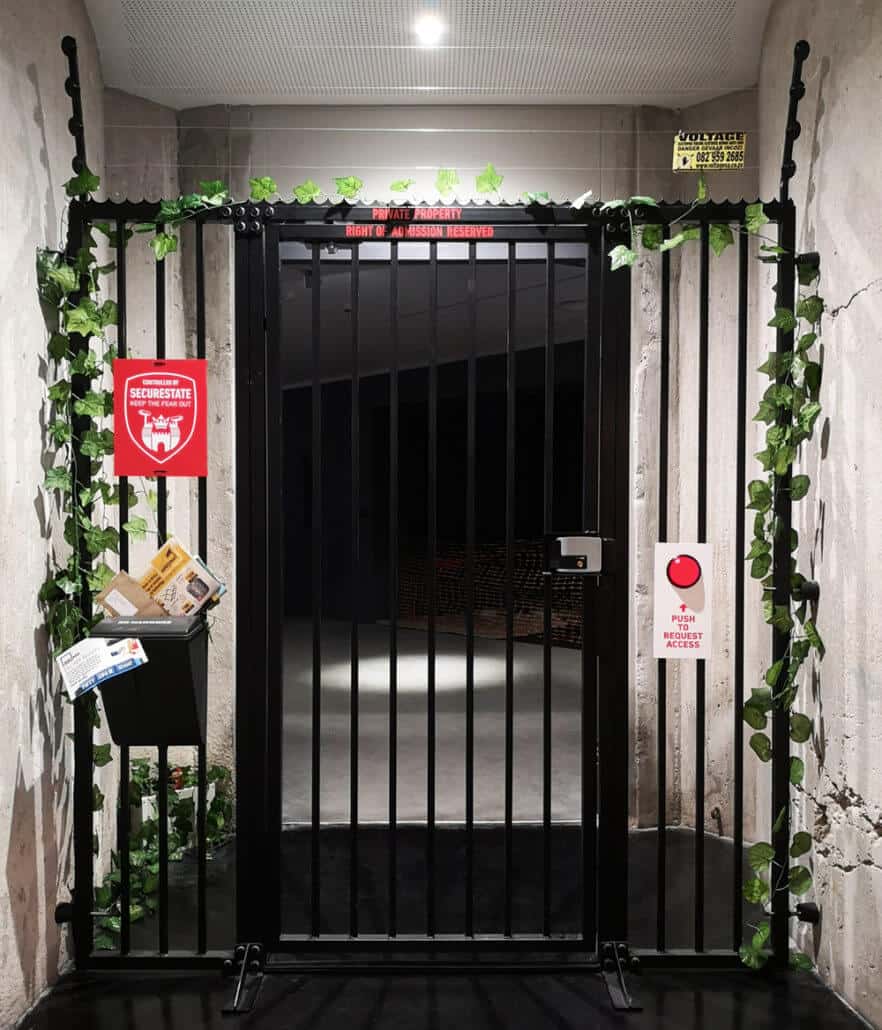 Can you please introduce the Main Complaint exhibition you curated for Zeitz MOCAA?

I had been working at the museum for two months when I was asked to come up with an idea for an exhibition in the Centre for the Moving Image. It was the only space in the museum without allocated artworks.

So, ‘The Main Complaint’ came from wanting to respond to some of the conversations that I had experienced leading up to and throughout my time at the museum.

‘The Main Complaint’ is a self-reflective exhibition. Zeitz MOCAA is a new space. The exhibition attempts to contextualise these conversations within those of what an institution means and what role it plays. In this case, an institution which exists within the legacy of South Africa’s colonial and apartheid history.

The title is adapted from William Kentridge’s 1996 film, The History of The Main Complaint, where surgeons mine the unconscious of Kentridge’s fictional character, white property magnate Soho Eckstein as he lies in a coma in a hospital bed. The film looks at white capital, power and responsibility and through the process of Eckstein’s self-reflection, questions what progress has been made. 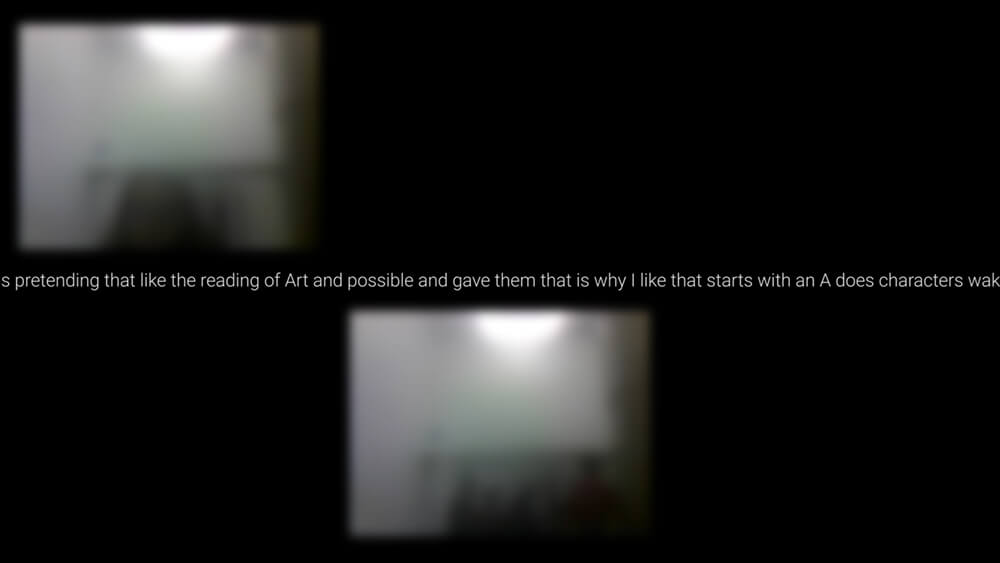 Please elaborate more on these ideas.

Some people perceived that there was a lack of communication between the museum and voices in the arts community, and believed that there wasn’t a sense of collaboration in the approach. As an institution that aims to be a representative of the African continent at large, there was an opportunity to being open to dialogue.

There is also the issue of spatial segregation in Cape Town that maintains systems of exclusion, so with the museum situated in the V&A Waterfront, there opens up the challenge of how this to honours a mission statement, which emphasises “Access for All”. The newly appointed Head of Education Liesl Hartman is doing some amazing this in this space, but these things take time as there is a lot of work to do on the most fundamental levels. So again, it goes back to communication. 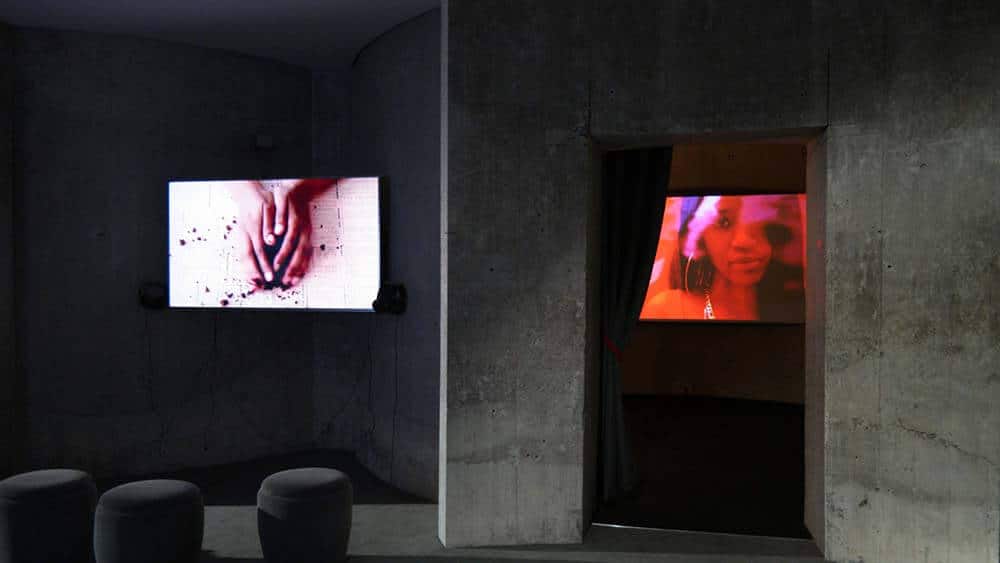 Within this context, how were you able to realise this exhibition?

What comes into mind is the title of Mary Sibande’s work In The Midst of Chaos There Is Opportunity. We are a young institution without clearly defined mechanisms of operation and this left a lot of room for experimentation.

I would say challenges, it needed work, but the exhibition had the support of the curatorial team. We also recently got a new Acting Chief Curator, Azu Nwagbogu, and his support has played a huge role. Then ‘The Main Complaint’ was finally realised. 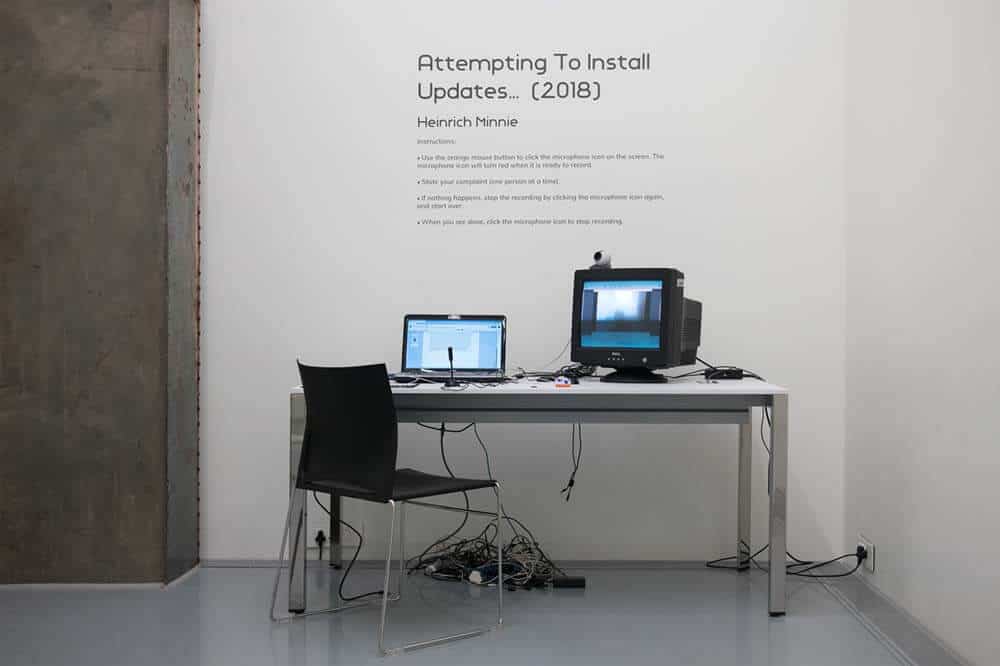 The exhibition has multiple works and I think it spans over three floors. Can you walk us through some of the works?

The exhibition began with a commissioned installation, an interactive artwork titled Attempting to Install Updates by Heinrich Minnie.  It is a ‘complaints desk’. Museum staff and visitors were invited to come and voice their concerns to this old laptop. It had no keyboard and there was clear tape covering the camera to distort the faces of those complaining. Google transcribed the complaints into a word document and the whole process was unstable because the system only understands English.

The artist then selected excerpts and turned them into a video work. The video points to the communication breakdown within institutions that operate like machines. We want to get so much done and we forget that there are people behind it all. So this can be quite daunting. So this artwork operated like an unresponsive therapy session.

One could also read the concerns of those that spoke into the machine before them. This resulted in concerns being legitimised or perhaps their significance being questioned. 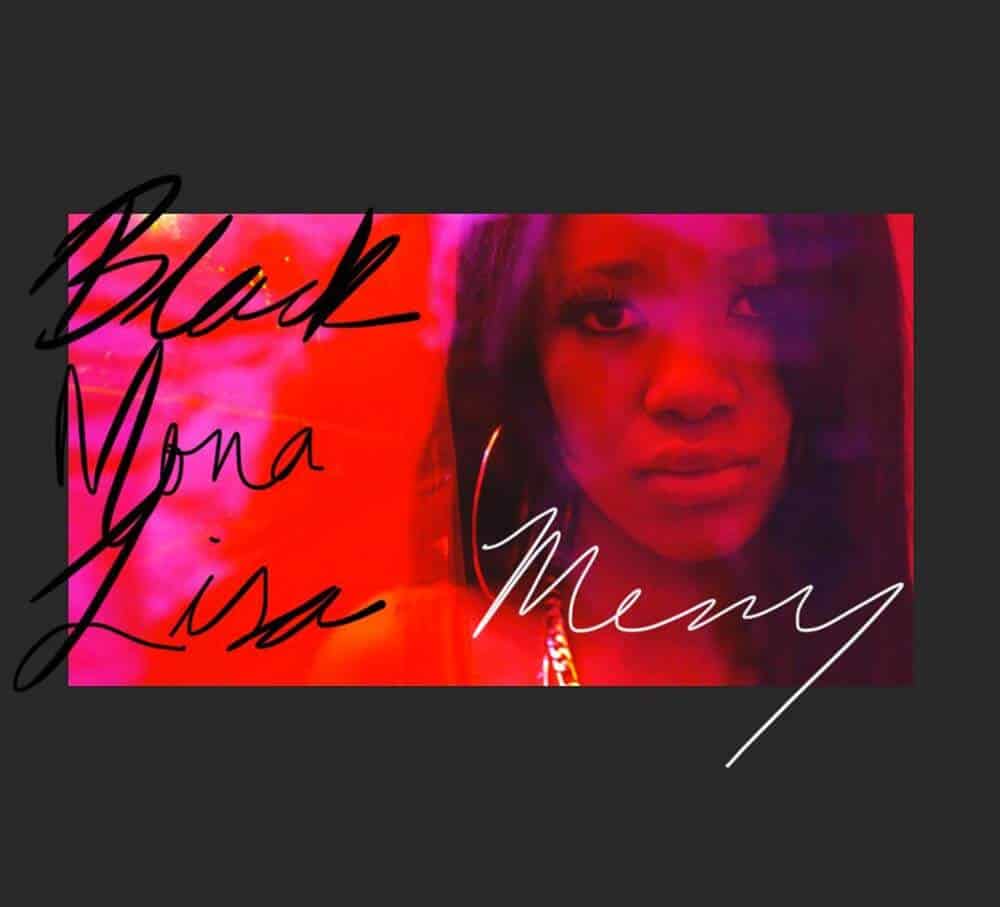 Which artwork do you feel hit the mark the exhibition was attempting to realise?

I wouldn’t say there is only one that ‘hit the mark’. They hit the mark because they exist together. Bonolo Kavula’s work has recently gotten a great response from staff and also the public. It was surprising in the best way and hit the right note for black women in particular.  It is an installation that includes a music video titled Black Mona Lisa performed by Kavula’s alter ego ‘Rapper Artist Painter’.

The installation includes the artist’s antique dressing table, which previously belonged to her Mother. The table has beauty products like Dark and Lovely etc., alongside there is a wall hosting magazine covers such as True Love. The work is an anthem for black women, with some of the lyrics stating that she has ‘Single-handedly annihilated every black female stereotype in the building.’ This is important because in some instances an image of a black woman or just the mere fact the artist is a black woman tends to assume that black women will, therefore ‘see themselves’ or that the work is ‘about’ them. This work acknowledges a deeper complexity. People are able to identify with things part of their personal daily routines. 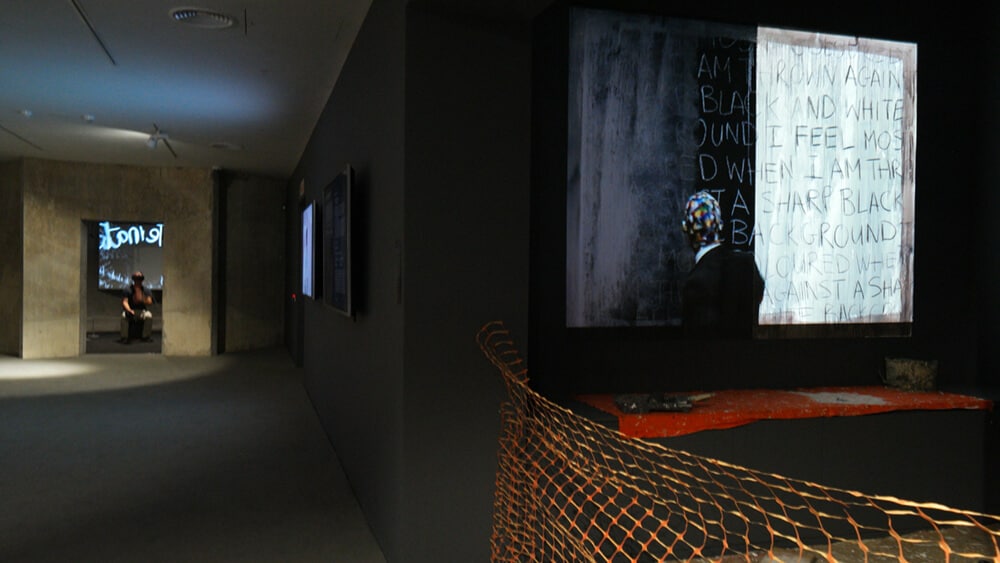 Installation view of Sepideh Mehraban, Kathy Robins and Olivie Keck (left). Rory Emmet, I Feel Most Coloured When I Am Thrown Against A Stark White Background, 2018 (right).

The museum itself does not have many spaces for contemplation. You find that Kentridge’s work on the first floor is intentionally super loud and other works are potentially being compromised by the intrusion of the sound. The same way his work would be compromised if it was turned down. Kavula’s work is also loud and unapologetic and there is a line that states ‘Doing It So Good I could be Kentridge’s daughter’.

Part of Kavula’s work was filmed outside Zeitz MOCAA. She is assuming the role of a black woman who is embracing every part of her sexuality and in calling herself ‘Black Mona Lisa’ referencing a painting that’s known all over the world. So she gives herself a title that immediately puts herself in a position of fame and importance. 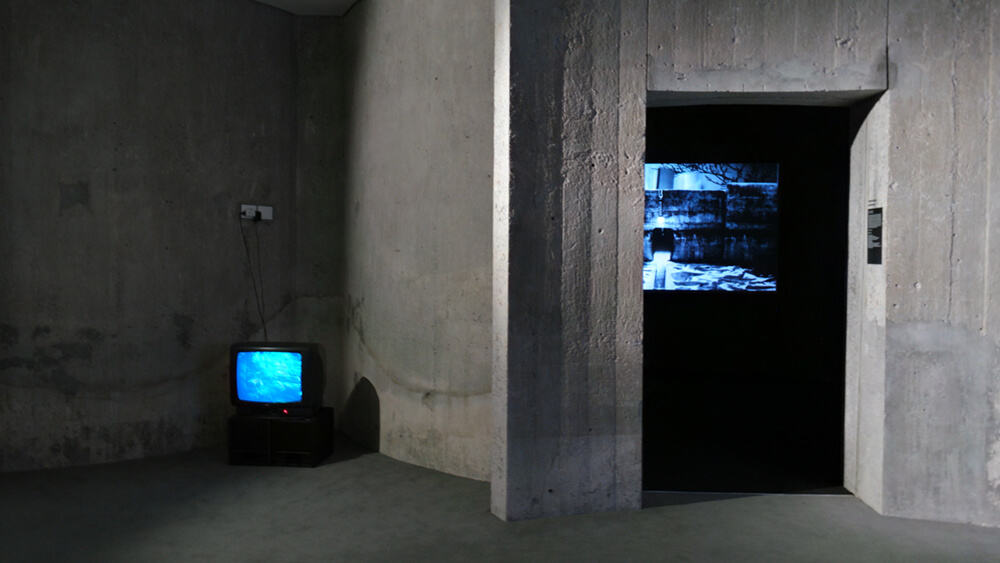 This is an interesting twist because it seems it is now not mere complaining, but taking charge of who you are and your own power…

Yes, and the other artists also continue this of adopting a mask or channelling some other persona so that people can feel safe in their expression. I think this is an attempt to be all you are.

Rory Emmett being ‘Colourman’ is in step with this. Francois Knoetze’s work has masks where individuals are reduced to the realities of their built environment. It is uncomfortable in your face piece where someone from the township’s head is a shack and someone from the suburbs has a manicured garden for their head. So just bringing the idea of spaces and people again. Using the process of green-screen in questioning how we are made to see ourselves and the idea of constructed identities in response to our environment. And systems that serve to separate people who are fundamentally the same. 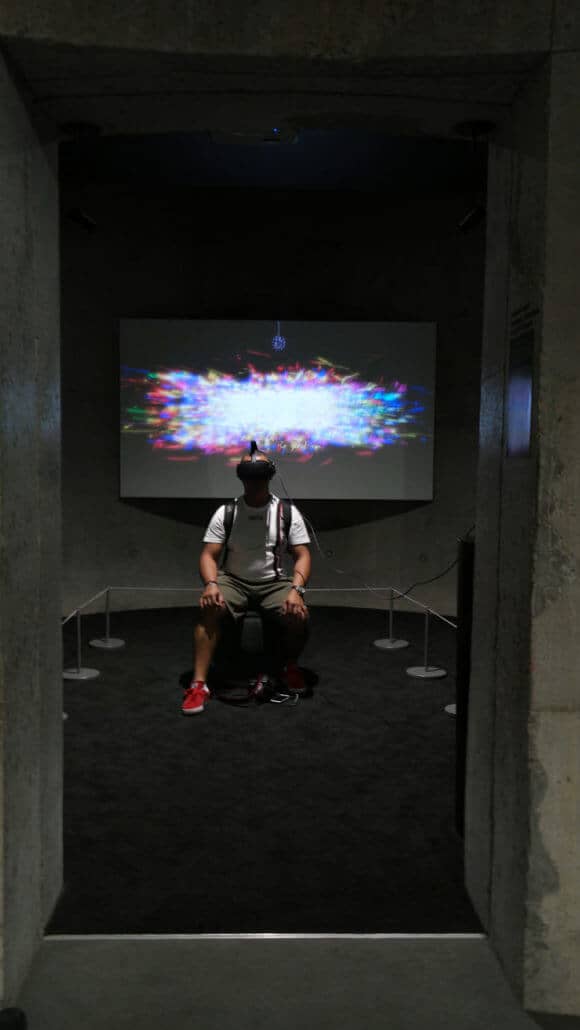 Is it intentional for the exhibition to have what seems like a coherent narrative in its exploration of ideas?

The artists explore common themes of access, value, representation and ownership, because these are the fundamentals of the way institutions are built and operate. The works are also conceptually tied to their processes and medium, focusing on the progression and importance of visual media as a tool to reflect on ideological and democratic systems, methods of self-representation and inter-generational memory. We look at how our identities are latched on to specific histories. Then we attempt to shift them. The virtual space explored in the collaborative VR work between Kathy Robins, Sepideh Mehraban and Olivie Keck is important and beautiful because inside this space constraints and prejudices become insignificant. It’s also not a familiar VR landscape where you follow a linear narrative with people and identifiable spaces. It has no signifiers of reality as we experience it. It is a meditative space and a non-space. It is a space of possibilities and contemplation.

Mehraban’s section explores the declaration of human rights when you enter, but it’s made using Google’s Tilt Brush – they are all painters. It was made by painting in Virtual Reality. You start off and you think about how the Human Rights Declaration has not been fully realised.

Keck’s ‘The Disco of Dying of Languages‘ surrounds you with vividly coloured letters that come straight into your face and it is almost like you can touch them. You look down and you cannot see your body. You are also thinking about languages dying, but then they become this glowing vibrant space where everything overlaps.

It forces you to think what’s potentially possible outside all of this. With a shared language. And maybe that language is VR.  People who watch it want to stay in it and live in that space. I think ultimately that is how I want people to leave. Not a feeling that everything is wrong, but also with a scope of what’s possible.