The Medium is the Message: Azu Nwagbogu on the exhibition at Unit London

Brendon Bell-Roberts speaks with Azu Nwagbogu on the opening of ‘The Medium is the Message’ at Unit London which he curated with the assistance of Wunika Mukan and Jana Terblanche.

At its core, ‘The Medium is the Message’ is an exhibition concerned with pigment over pigmentation. It is primarily about the power artistic pigment holds when trying to express an identity free of cliche. The exhibition takes this focus in order to avoid curatorial emphasis being placed on the pigmentation of skin, which can often reinforce such cliches. 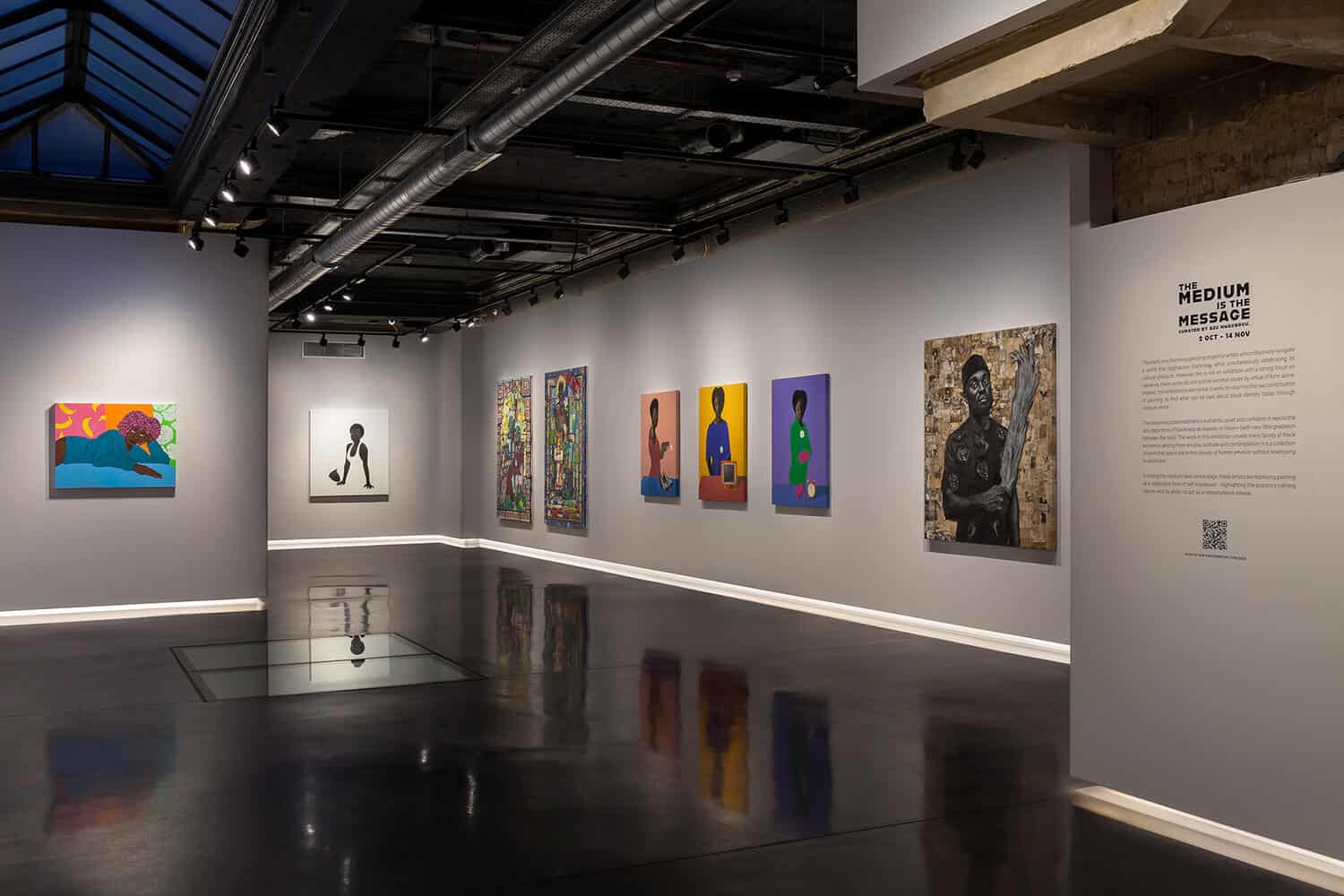 Installation view of ‘The Medium is The Message’ at Unit London. All images courtesy of Unit London.

‘The Medium is the Message’ is curated by Azu Nwagbogu with the assistance of Wunika Mukan and Jana Terblanche. The exhibition brings together artists who collectively navigate a world which stigmatises blackness while simultaneously celebrating its cultural products. However, unlike many recent shows featuring black artists, this is not an exhibition with a strong focus on narrative, these works do not outline societal issues by virtue of form alone. Instead, this exhibition is elemental, it seeks to return to the raw constituents of painting, to find what can be said about black identity today, through medium alone.

ART AFRICA: Can you tell us about the exhibition entitled ‘Medium is the Message’ and what it represents?

Azu Nwagbogu: The title references the work of Marshall McLuhan, the Canadian philosopher of media theory whom many credits with predicting the internet and its impact on society. The idea for the exhibition was to bring together painters and to explore what the internet, social networks and highspeed communication could provide to pass on the message. This conversation is particularly interesting because some of the earliest drawings and paintings were found in Africa and made for travelling, painted on stone tablets, and carried on the person. In Namibia, for example, this form of rock painting is over 70,000 years old. However, in contrast, modernist African painters have still not been adequately written into the canon of the medium, and of African art histories. The same is true for contemporary painters. All the artists invited to this exhibition are Instagram stars and have benefited from the internet as a medium but have also contributed to the revival of contemporary figurative painting and portraiture. The missing link is the fact that mobility and movement are features of their media – painting and their form of distribution digital through social media platforms. Hence the ‘Medium is the Message’. 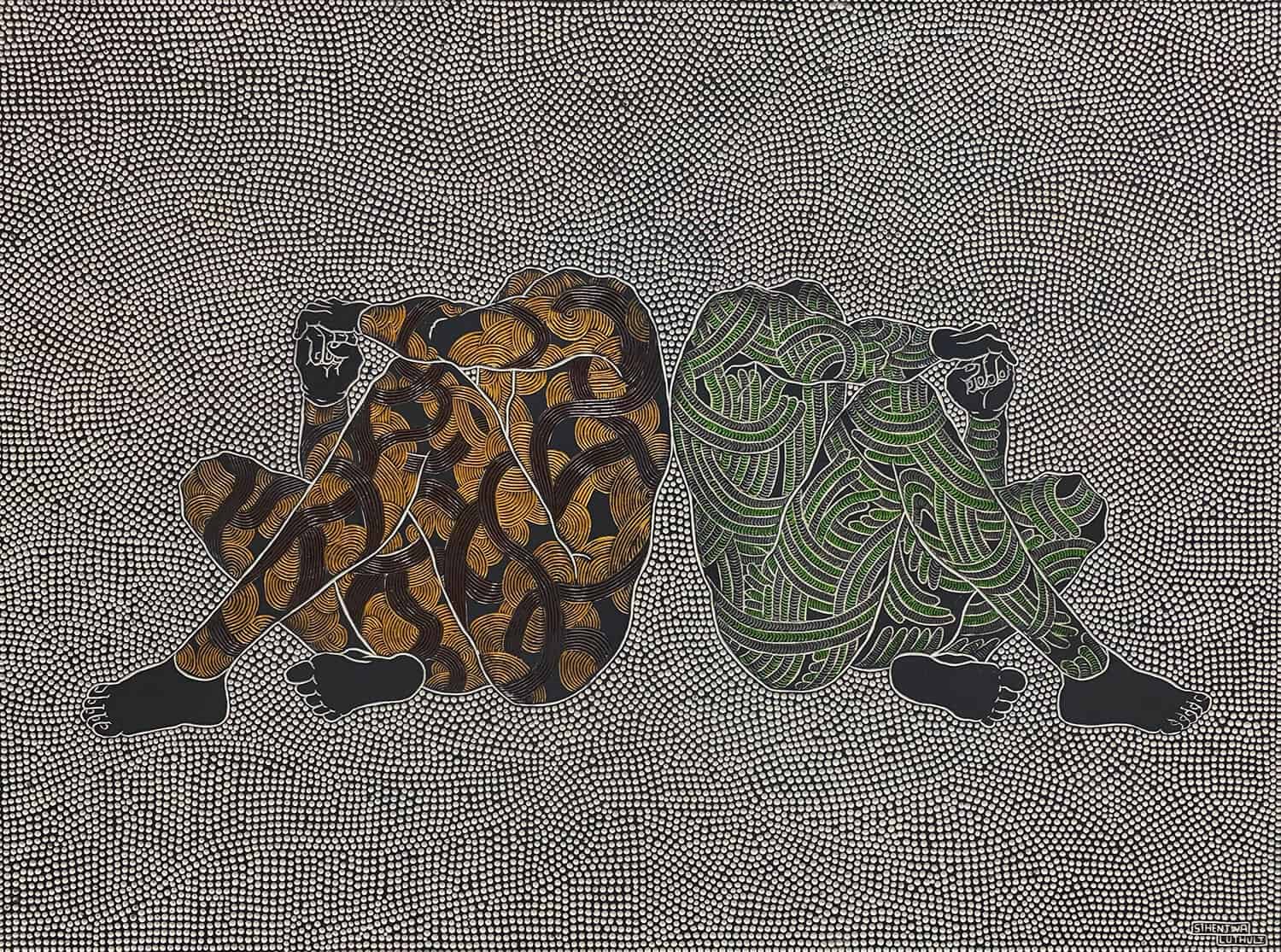 The second layer was to look at portraiture and paintings of Black subjects that go beyond representation toward a radical form of activism. Here the subjects are not celebrities, superstars, famous personalities.  It is not about “Black Excellence” or “Black Misery”. These artists do not feel the need to represent extremes. We are aware that it’s Black History month and there is the expectation to celebrate Black Britain, but it is important to state unequivocally: You don’t need to be a Marcus Rashford or dunk a basketball to get respect in society. To be taken seriously, your art does not need to be about any forms of existentialist struggle. There is meaning in the mundane.

It is not about “Black Excellence” or “Black Misery”… To be taken seriously, your art does not need to be about any forms of existentialist struggle. There is meaning in the mundane.

How does this exhibition stand out from the previous ones you’ve curated? What was the driving inspiration behind the exhibition?

Every exhibition I curate is different and is also the same! It’s not about me but the artists. It’s also about the team that supports an idea I come up with.

The last major exhibition that I curated was the William Kentridge show ‘Why Should I Hesitate: Putting Drawings to Work’, which was at Zeitz MOCAA while I was still acting director. It is opening at the Deichtorhallen in Hamburg later this month. With Kentridge, it was a different approach but ultimately the same end goal: to enable the audience to read the intentions of the artist. He saw it as a sort of homecoming and our dialogues and conversations shaped the exhibition. We agreed that we could not venerate him or his work anymore, given his acclaim and all the books on his work and the exhibitions he’s had. It would be more interesting to demystify him, unveil the magician’s secrets, and use this to create a counterpoint narrative to his work and the history of South Africa. Kentridge was game and really loved this approach. He is impressive and immense in his generosity to his community. 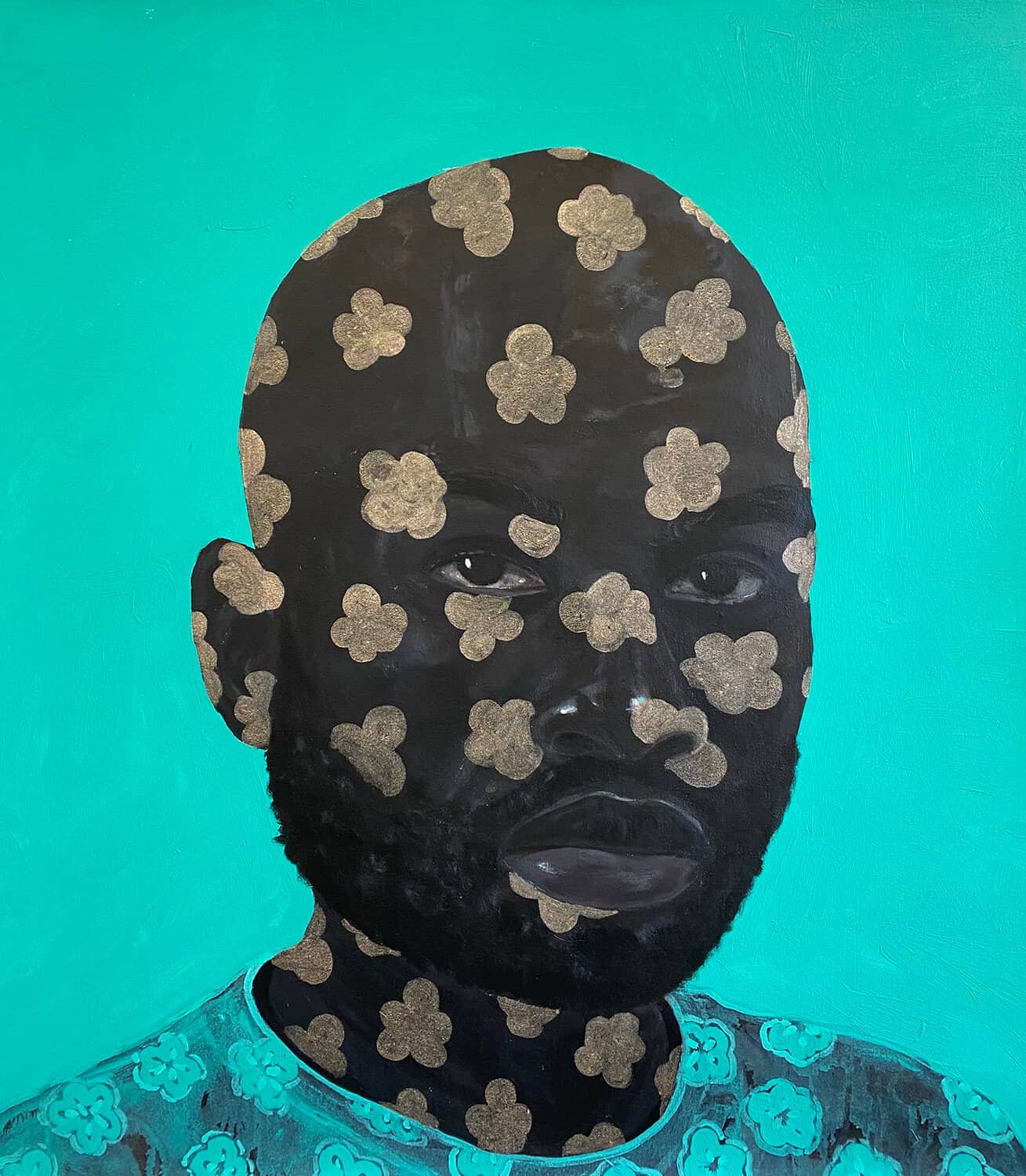 With the artists in the ‘Medium is the Message’ it was more a case of bringing them into a space where the audience could read their intentions and recognize them. These artists today do not necessarily need curators, galleries, etc. to sell their works. They are much sought after directly via their social networks. But the risk is that after initial commercial success, the work and the movement and the moment pass. What I try to do with this exhibition is bring the work into a space where it invites conversation, critical discourse and an exploration of ideas so the movement is not reduced to a trend but has sustenance through curious audiences. I have to acknowledge the Unit London for their foresight and care in hosting this exhibition.

With the artists in the ‘Medium is the Message’ it was more a case of bringing them into a space where the audience could read their intentions and recognize them.

To what extent has the essence of representation influenced your alignment with this year’s exhibition?

The art on view unveils many facets of Black existence that encompass play, solitude, contemplation and a range of human experiences with approaches that do not kowtow to exoticism, but reflect the communities from which they were birthed. It is Blackness without burden. 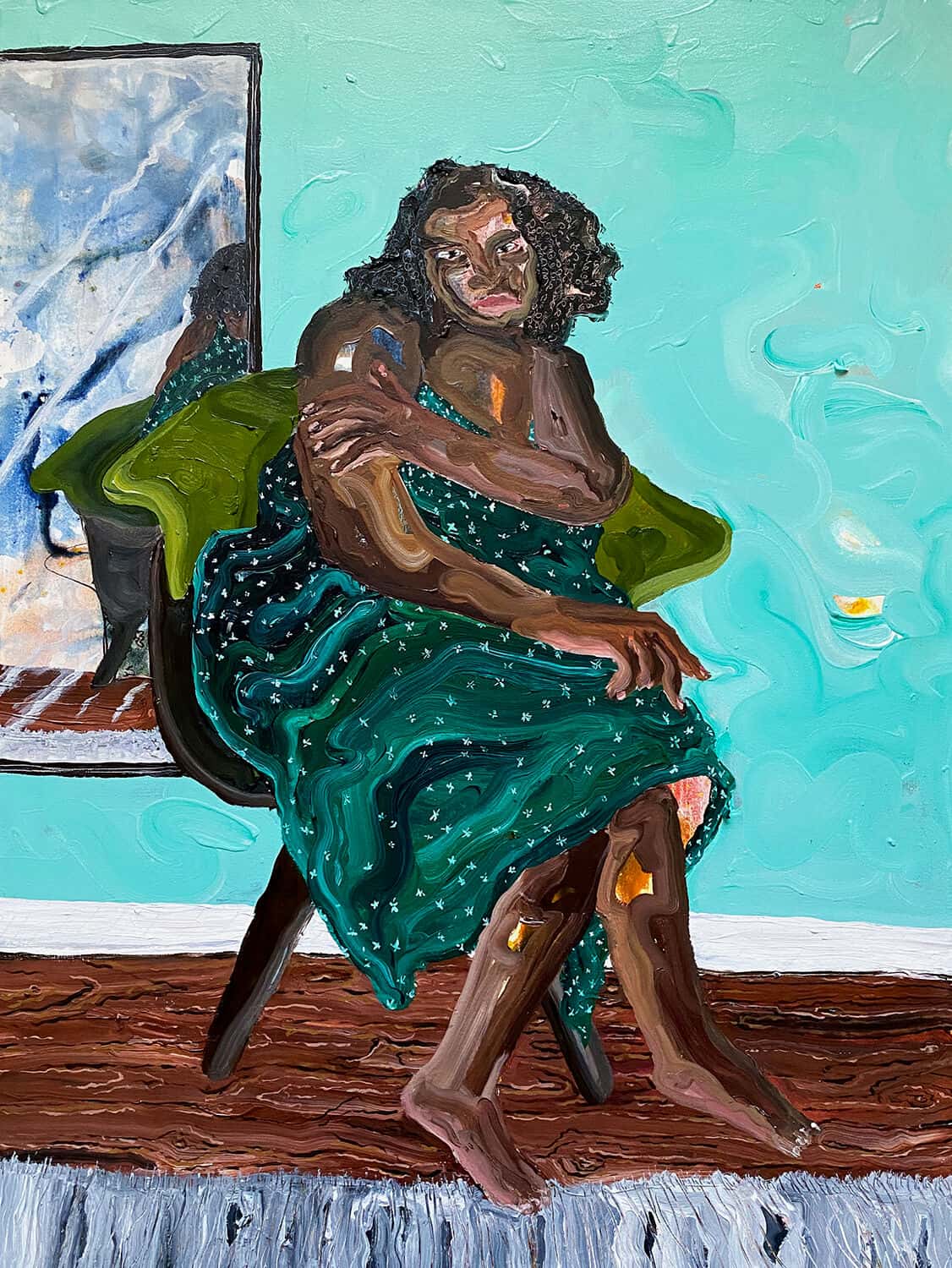 Who are some of the emerging artists that will be featured and why have these artists been selected?

Ludovic Nkoth, Sunji Mlengeya, Manyaku Mashilo, Tiffany Alfonseca, Zandile Tshbabala all contribute a determined, powerful gaze for their subjects. Their portraits demonstrate a strong sense of resolution that is quiet and understated. John Madu, Eniwaye, Wonder Buhle, Collins Obijiaku, Peter Ojingirin, Dawn Okoro and Nozi Schommers are the mischief-makers in the show. Their portraits are loaded with brilliant ambiguity, and there are Sthenjwa Luthuli’s woodcut contributions that anchor the exhibition. His technique combines relief sculpture and paint, and illustrates that the medium cannot be divorced from the message. Barry Yusufu’s charcoal and acrylic painting/drawing hybrid merge the figurative with the metaphorical. Anedu Edozie’s three paintings offer an exploration into a different form of figuration that tends towards expressionism. Finally, Emma Odumade, the youngest artist in the show at 20 years builds up the image through a series of vignettes that form the background of the final portrait.

The art on view unveils many facets of Black existence that encompass play, solitude, contemplation and a range of human experiences with approaches that do not kowtow to exoticism, but reflect the communities from which they were birthed. It is Blackness without burden. 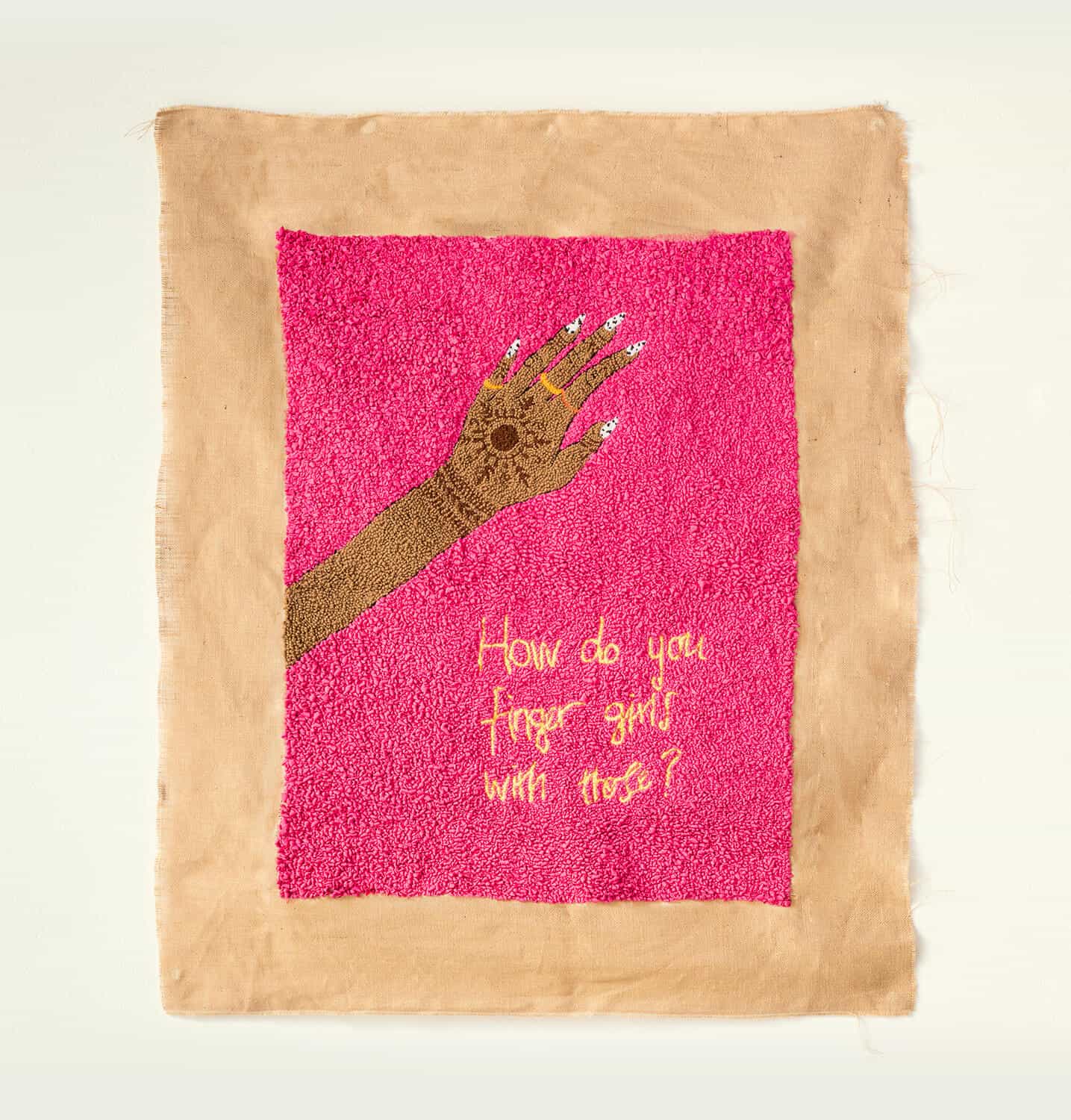 Your selection of artists draws heavily from Nigeria and South Africa. Was the North/South selection a specific consideration?

It is a fair comment but not quite accurate. You could say that most artists in the show are from both countries but there are a number of artists who traverse Africa and its diaspora like Ludovick Nkoth (Cameroun and USA), Sungi Mlengeya is Ugandan and based in Kampala and others who may be termed as mostly diasporic like Tiffany Alfonseca and Dawn Okoro. These sort of triangles of geographies, West Africa, Southern and East Africa and the journey up north to Northern Africa and diaspora interests me as a network of ideas.

What kind of response would you hope to get from the visitors/viewers of the exhibition?

I hope visitors just enjoy the show and see and engage with the diversity that’s possible within Blackness. I also hope that through this exhibition we can engage with some of the ideas that are expressed in these works.

Would you have any advice for aspiring artists for their future?

I would like artists to never lose their curiosity for all things.