‘The Moon is Asleep’: Abrie Fourie In Conversation with Robin Rhode

Abrie Fourie spoke to Robin Rhode prior to the opening of his solo exhibition, ‘The Moon is Asleep,’ which opened at the SCAD Museum of Art in Savannah, Georgia. Fourie spoke to the multidisciplinary artist about his influences and practice, and particularly his interest in subverting the very act of drawing. 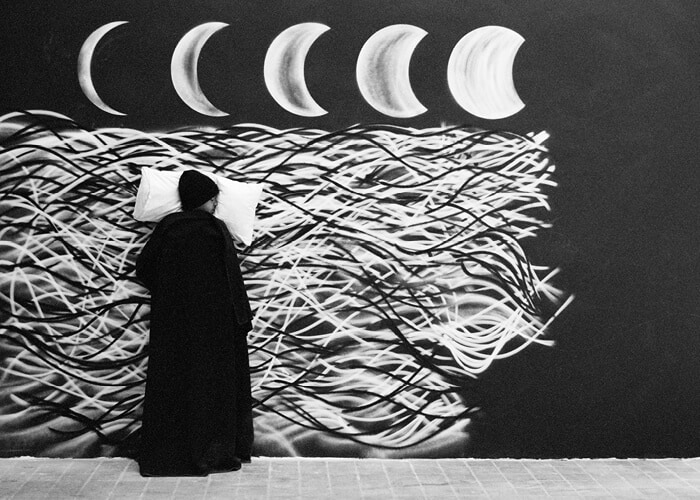 Abrie Fourie: Could you explain the conceptual premise behind ‘The Philosophy of Furniture’?

Robin Rhode: The conceptual premise behind this body of sculptural drawings is based on a short essay by American author and poet Edgar Allan Poe. The essay was, in essence, Poe’s take on interior design with the author citing various nationalities and their take on domestic interior composition. My parallel interest in Poe’s essay is the idea of interior design and how cultural backgrounds allow for visual arrangements to take place within the given space; the other interesting conceptual overlap would be the layout of an art exhibition. What also intrigued me was the relationship between Poe’s theory and the notion of architecture – in this case domestic interiors – and how furniture could be loaded or infused with socio-political cultural codes. The body of work presented at the SCAD Museum is comprised of rudimentary household objects – such as a coat hanger, bed mattress, chairs, even a racing bicycle – all covered in layers of black wax oil crayon and suspended from the ceiling with rope or resting on enlarged stretched canvases. Each object becomes a drawing instrument with the potential to produce marks and physical gestures. I have always been fascinated with objects that have a very specific reference to the body as well as interior space. Poe’s essay also touches on aspects of cultural differences and poor taste inherent within various societies and class structures, ideas that are also apparent today in South African society with the conflicting social dynamics that occur between class and race. With regards to the process of the performative drawing action, the trace of the oil crayon objects on the white canvas becomes the emotional link between time and space. 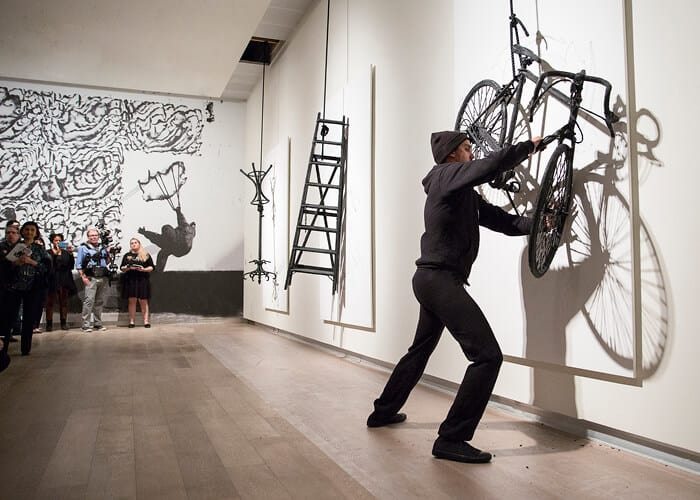 Robin Rhode, performance of The Philosophy of Furniture IV, 2016. Photograph courtesy of Savannah College of Art and Design.

Why have you chosen to subvert traditional drawing practice with the bicycle, mattress and so on?

My intention was to reverse the drawing process. Rather than depicting an image, or an object, by creating a drawn representation of it, I wanted to create the image first – in this case, the oil crayon furniture – and then attempt to generate marks and traces with the image by using the body’s relationship to the object. The live performance action occurs in real time, allowing the audience to experience the drawing process. I chose quite familiar domestic objects that wouldn’t appear too foreign within an exhibition setting, and are therefore relational on many levels. The idea of subverting the objects would thus allow for a more heightened and participatory experience for the audience.

A trademark of your animated lms is the performative interaction with walls and drawings that create dream-like worlds. Why have you chosen to develop your performances into life-size illusions of these dream worlds?

The idea of scale is one of the art-making processes that I struggle with; sometimes even approaching a simple sheet of paper becomes an obstacle for me. My ability to generate a drawing seems simple when it is ‘to scale’ rather than reduced to the dimensions of the paper. So the physical process of drawing becomes more natural for me when I am able to work directly on walls. This idea of rendering scale allows the viewers to project themselves into the work directly. The artwork then becomes an essay as to how we relate to the world around us and how it is absorbed into us. The dream world scenario just becomes a tool of expression. Art is about creating an almost tangible illusion. 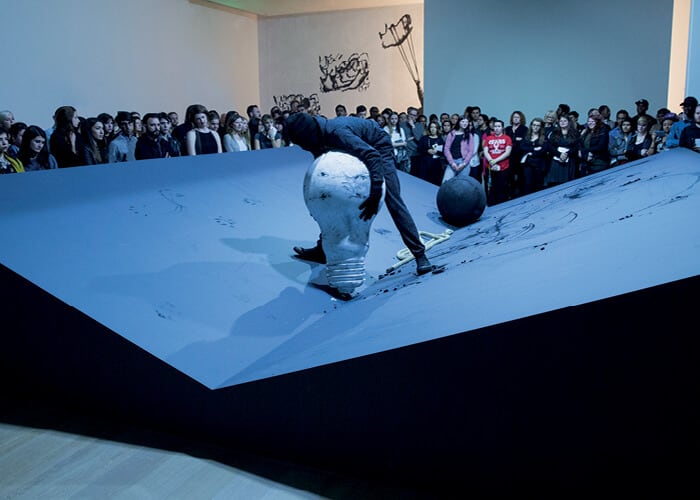 You’ve mentioned to me before that you enjoy working with a doppelgänger, why is this?

I enjoy collaboration immensely. The use of a doppelgänger allows me to work more as a choreographer, so I am able to step back and place a greater emphasis on angles, details, and general bodily movement within the picture plane. Working with a doppelgänger also allows me to focus on the drawing process rather than having to switch from being the performer to the director of the drawing. One of the main reasons for incorporating the doppelgänger is the idea of physical threshold. An example of this is how trained dancers are able to manipulate time through a controlled physical intensity. My interest is how other individuals or collaborators are able to use their bodies to generate time. Or, how they are able to use their bodies as a response to the condition of the drawing. I see the body as a mechanism to reflect the drawing narrative. 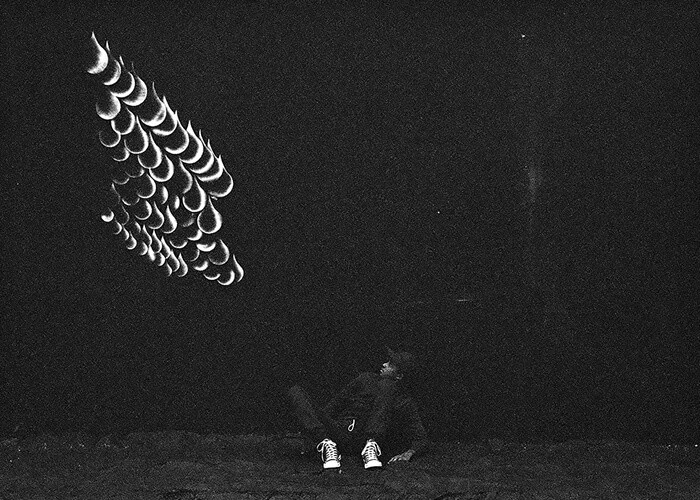 The seed for this live performance was planted many years ago when I visited the city of New Orleans. I came across Black Consciousness t-shirts for sale in a general goods store in the Lower 9th Ward. One t-shirt read ‘BLACK INVENTORS AND THEIR INVENTIONS.’ I was really captivated to discover the range of inventions by black inventors: the guitar, the letterbox and many other highly functional objects. My greatest surprise was discovering that an African-American inventor and draftsman, Lewis Latimer, invented the carbon laments used in light bulbs. I see many contemporary African artists as inventors too, and understand this yearning of wanting to expose their work – or inventions – on a global scale. The light bulb invention became a kind of creative ‘yardstick’ in conceptualising a live performance. By using two enlarged light bulb sculptures: one fabricated in white chalk, which could denote the light bulb switched ‘on,’ and the other in black charcoal to denote being switched ‘off,’ my idea was to reposition the concept of this simple domestic object as material under constraint. In terms of the title, it could work vice versa, light giving and light taking could apply to both black and white drawing mediums. This ambiguity is an important element because the character in the live performance acts as an energy conductor between the two materials. The performance embraces a kind of ‘Brechtian Theatre’ premise, whereby a set of conditions is established and the performer needs to operate within the grey areas of the specified conditions. This approach lends a more experimental – yet physical – slant to the performance whereby the audience is able to witness a struggle between the body and the concept, between the set parameters and the tension inherent when the parameters are played with, and therefore reinvented. 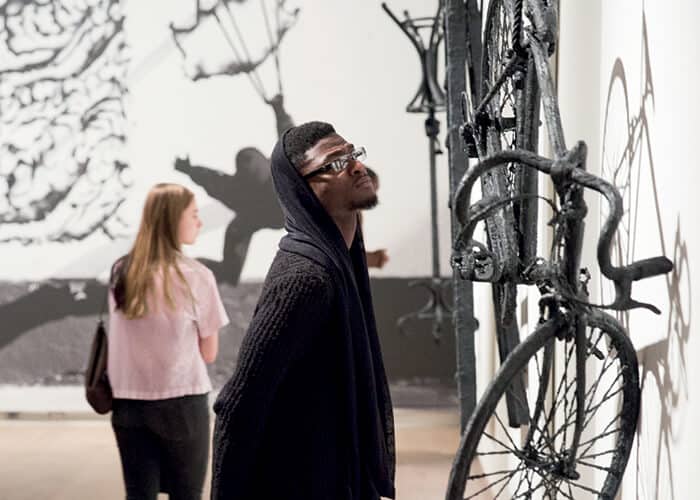 You’ve chosen to shoot both animations, The Moon is Asleep and Blackness Blooms, on 8mm and then transfer to digital HD, why is this?

I’ve worked extensively with Super 8mm film. The graininess of the medium, as well as its low-quality, is quite seductive. It lends a kind of timelessness to the film content, as if the work was filmed in the early 19th or 20th century. That period is another direct artistic influence with regards to the history of early performance art and cinema. My work is an attempt to reference these early influences while highlighting issues that are more pertinent in our society today. The aesthetic of the film allows one to work in a more simplified manner, with either drawings or paintings. Basically the medium is unable to capture plenty of detail and therefore one begins to work in a more essential manner. Super 8mm film certainly has its limitations with regards to presentation so I do prefer more control when the actual film is digitised. Also, I try to not be overly nostalgic about film but rather to be more fleeting with the art mediums at hand.

Tell me more about the narrated poems that feature in both these animations?

The two poems, titled the The Moon is Asleep and Blackness Blooms, are composed by the South African poet and activist Don Mattera, who also narrates them with incredible emotional depth. Both texts describe the poet’s experience of apartheid South Africa. The Moon is Asleep relates to the poet’s lover who had passed away from HIV/AIDS. Upon discovering the news of her passing, he describes the night sky as completely black, without a moon and without stars. The poem is a homage – a dirge – to his lost love. Blackness Blooms describes the poet’s time in police detention as a result of his political activism in South Africa. Here, Mattera speaks intensely of his blackness as the reason for his suffering, his torture and eventual incarceration. Yet, in the end, his ‘blackness’ becomes the planted seed that will later bloom to become his beauty. The poem speaks of both suffering and hope and is an inspiration for many of my current works. Mattera has also influenced many of my works over the years – his work emphasises a time and place that is so distant from the post-apartheid generation. My intention is to establish a dialogue, to create a bridge between the past and present socio-political landscapes of South Africa, so that the future is experienced with a deeper sense of consciousness of who we are and where we’ve come from. Art takes us to where we’re heading.

Your body of work overtly confronts and plays with issues of time. What is your understanding of the philosophy of time as it relates to your art and what are you trying to communicate about time with your various interpretations thereof?

For me, the idea of time is just another motif, an idea that could be played with, and therefore reinvented.

Abrie Fourie is a South African artist based in Berlin, Germany. His practice is largely photography based, but he is also active in teaching, publishing and curatorial projects. Since 2005 he is the curator and facilitator for Modern Art Projects South Africa (map-southafrica. org.)