The ‘Painting’s Not Dead!’ Issue (13.4): In Conversation with Bruce Onobrakpeya

in News Articles 2013
Share on facebook
Share on twitter
Share on email
Share on whatsapp
Having met with him at Art Dubai recently, we spoke with Professor Bruce Onobrakpeya, a pioneer of modern African art, renowned master print-maker, painter, sculptor and founder and President of The Bruce Onobrakpeya Foundation (BOF) and the Harmattan Workshop.
This article is an exerpt of the full interview, which appears in the June Digital Issue (FREE download here for Apple and here for Andriod) and the ‘Painting’s Not Dead!’ Issue (13.4) of ARTsouthAFRICA – on shelves at a store near you soon! 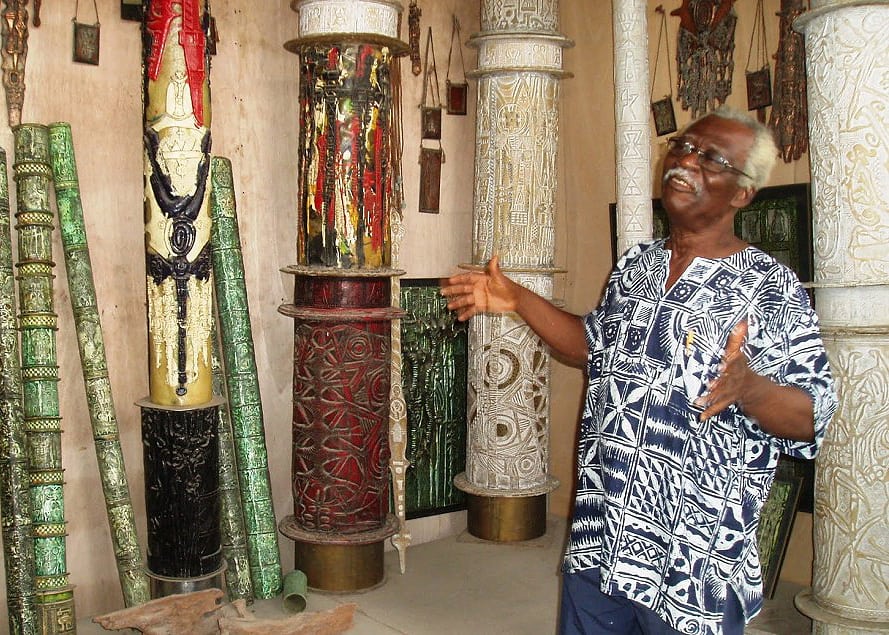 ARTsouthAFRICA: As an experimental artist, you have discovered and developed a number of innovative techniques, including bronzed lino relief, metal foil deep etching and the artistic writing style, Ibiebe. What inspires and drives you in your art practice and the journeys of experimentation?

Bruce Onobrakpeya: My childhood experience of the cultural environment of Urhobo and Benin formed the artistic bedrock on which I continue to build. The physical environment, culture, world view and philosophy (including the religion and cosmology of the Urhobo people, who are part of the larger Edo speaking group) formed a pyramid with the arts at the apex, serving as a catalyst that binds all other elements together. My early exposure to these arts sustained my artistic expressions by giving me access to a world of imagination, through bridging the thin gap between realism, surrealism and abstraction; the living world and the underworld of spirits and the conscious and subconscious self of dreams. With my roots firmly planted in this rich environment, it was easy for me to be excited by and relate to other ethnic and physical environments. An artwork gives body to an idea conceived in the mind. I usually produce many artworks from a single inspiration – a result of an inner urge to continuously probe an idea for clarity, mystic and higher aesthetic enjoyment.

You have received many awards and accolades, including The Living Human Treasure Award (2006) from UNESCO and a Honourable Mention from the organisers of the 44th Venice Biennale. Have these distinctions assisted you in developing the BOF and the Harmattan Workshop?

The national and international awards have drawn favourable attention to my artistic creativity and have assisted in the development of BOF and the Harmattan Workshop through sponsorship opportunities and partnerships with other organisations around the world. As a result of this recognition, the Harmattan Workshop has expanded into West Africa, America, Canada and Europe. It is also interesting to note that two of our past participants exhibited at Art Dubai this year – an accolade in itself.

It is apparent that there is a strong focus on community among you and your contemporaries; how do you use this to grow and nurture a deep appreciation of the arts in your region, country and society?

Crises of the public’s appreciation of the arts arose from colonial times, so the first task is to re-establish the importance of the visual arts in our culture. We do this by teaching in schools, colleges and universities, commenting on national issues, and making sure that our artists live a worthy and respectable life that other members of society can aspire to. We have also gone to the extent of establishing workshops in rural areas, where they aid in community job creation and promote awareness about the potential for wealth creation and the importance of the arts in any society.

What, in your view, should artists, foundations, museums and governments be doing to support and advance Africa’s growing art and cultural sectors?

It takes huge investment to bring the pleasures and untapped resources of the arts to all and sundry, and to the point of marked economic development for Africa. Individuals, nonprofit organisations, The Economic Community Of West African States (ECOWAS) and the African Union should work to make policies that will elevate the arts, instead of oil or wildlife, as an alternative source of income for the continent.

See the rest of this interview in the June Digital Issue (FREE download here for Apple and here for Andriod)!