The ‘Painting’s Not Dead!’ Issue (13.4): In Conversation with Mehdi Ben Cheikh

ARTsouthAFRICA in Conversation with Mehdi Ben Cheikh, founder and director of Galerie Itinerrance in Paris and Tour Paris 13 project (La Tour 13), as well as the organiser of Djerbahood, a beautiful open-air graffiti museum in Djerba, Tunisia.

This interview appears in full in the ‘Painting’s Not Dead!’ Issue (13.4) of ARTsouthAFRICA – on shelves at a store near you soon! You will also be able to read this exclusive content in the August Digital Issue (FREE download here for Apple and here for Andriod). 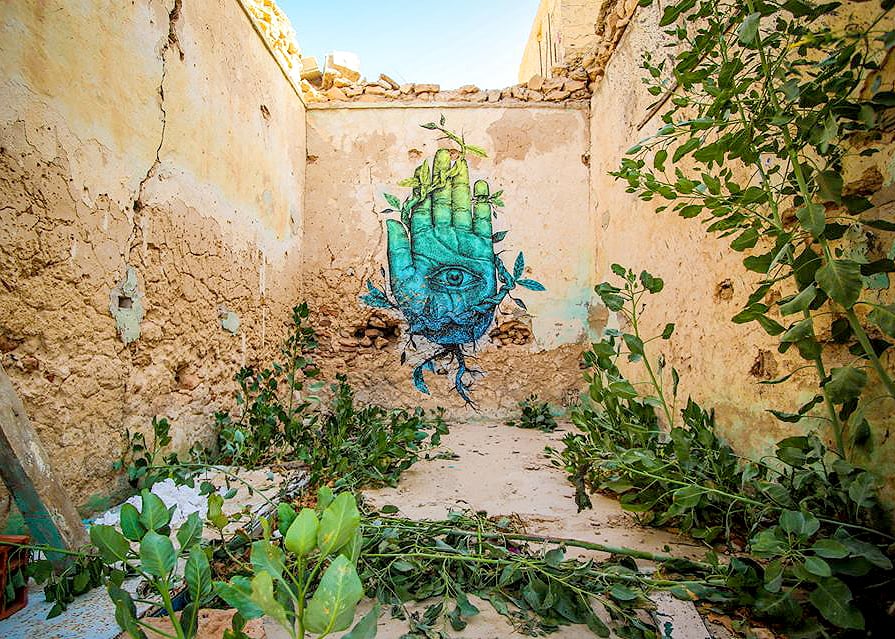 ARTsouthAFRICA: Along with being the organiser of Djerbahood, the open-air graffiti museum in Tunisia, you are the founder and director of Galerie Itinerrance, a street art and graffiti gallery in Paris, and the Tour Paris 13 project (La Tour 13), which saw 100 artists from all over the world creating the biggest collective street art exhibition in Europe! What initiated your interest in street art?

Mehdi Ben Cheikh: Street art is something you see everywhere, on the street, on the Internet, through social media. The work of a gallery owner is not to only to sell works but also to convey the process behind it – what really interested me was to be part of a movement, a story, and I chose the narrative of street art.

How do you find and connect with artists who you are interested in exhibiting at Galerie Itinerrance? I would imagine that the process is much more informal than commissioning conventional artists.

I select artists on the Internet. I don’t always know who I want to exhibit straight away; the process can take a long time. Most artists are open to creating new projects and as a result of digital media it is a small world. In that sense, my process is perhaps less conventional than that of a traditional gallery director.

What matters most to me is that the artist is totally conscious of his act. The work is not only about creating something beautiful or decorative, but it is to really create a work in situ, in an equation with the architecture and with the function of the site.

You said in an interview with the New York Times, “Street art is the biggest and most unique art movement in history because of its global impact and its lack of dependence on conventional institutions.”

There are many who would disagree with graffiti or street art being considered ‘art,’ simply writing it off as vandalism. What is your opinion on this? And what do you think can be done to alter people’s perceptions of ‘urban art’ (encompassing street art and graffiti)?

I have no explanations to give for those who still consider street art as vandalism. I think actions are more efficient than words and thus I try to provide demonstrations. La Tour 13 and Djerbahood, for example, are events that contribute to changing the larger public’s opinion about art and its conventions. Sometimes, when people attend these events, it is the first of its kind that they have experienced, which leads them to discovering urban and street art, or at least seeing it in a new light. All of this takes time, of course, but we are in no hurry. 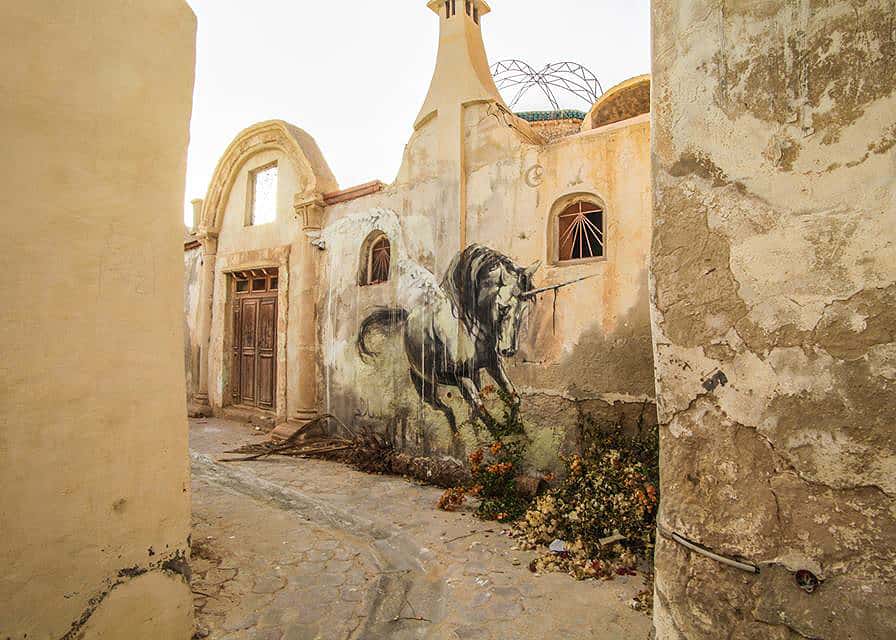 Djerbahood consists of the work of over 100 international street artists, many from Africa, on the walls of Er-Riadh, a village on the island of Djerba off the coast of Tunisia. Why here?

Contrary to La Tour 13, where each artist had his own room to create his universe, in Er-Riadh there was a real constraint; the consciousness of the place. This consciousness became all the more powerful because it was the people behind each door and each wall that made the project come alive. It is also a very meaningful village because Muslims, Jews and Catholics live there in peace with one another. It is a land of tolerance. Besides, Djerba is well known and its airport very accessible, which make this island advantageous for the logistics of such a project.

Four months before starting this project, as a French-Tunisian, I knew I wanted to do it in my native country, but I did not know Er-Riadh. It was a friend who advised me about this village, peaceful and friendly. It was almost love at first sight – the architecture is beautiful, there are domes and vaults and it is a new exercise for many of the artists to paint on these surfaces. There are no fifty-metre high walls, just low little houses, called Ouch. It was what I was searching for and the beauty of the village enchanted us all.

How has Djerbahood been received by the local community and artworld?

Djerbahood led to some suspicions at the beginning because no one in Er-Riadh knew what street art was. Some of the inhabitants weren’t too happy about the idea of painting artwork onto the walls because they were not sure how it would fit in with the community, but now most of them are overjoyed. The inhabitants often asked for new wall pieces on their houses! Some locals have lived there their whole lives and it is the first time they have seen people from all over the world coming to Er-Riadh. It has become something that they feel proud of because Djerba has always been a place opened to the world; traditionally, they are merchants and it is a place where the other is welcomed.

This issue of ARTsouthAFRICA centres on ‘painting’ as a thematic topic, declaring, “Painting’s not dead!” While urban art on the streets may not be considered a legitimate art form (yet), Galerie Itinerrance invites urban artists into the gallery space to exhibit, often producing works on canvas.

When asked about Djerbahood and Tour Paris 13, you have said, “We’re bringing street art back to the streets.” Why the decision to take it into the gallery in the first place? And does it really need to be “brought back” to the streets, its natural environment?

To me, an artist should be a ‘complete’ artist; he can create anywhere using any medium and every artist should be able to use any medium they want. So the fact they want to paint on the street and then paint on canvasses and make sculptures works perfectly for me. Of course painting is not dead! What matters is the quality of the transition of the artist – how he reinvents his artistic knowledge with his own abilities, how he keeps its originality but invests it in another way.

Some practices, however, do not suit canvas so they need something else, a medium for the transition, such as an urban object – metro plates, old doors, post-boxes (like the artist C215 uses, for example). Some others do outdoor projects so successfully that we only find photographic reproductions of it in galleries, functioning as reports of what is really happening outside.

The street and the gallery both have their own requirements, but we should not mistake what the objectives of the artists are and assist them in finding the means to reach them. If we do not find the right formula, then it is better to stay ‘on the street’ and not betray oneself.

Street artists are already stars, some with up to 300 000 fans on Facebook. If they wanted to sell paintings they could easily do so themselves, but the role of the gallery owner is to give to the artist what he really needs – the possibility to intervene in a different way on the street, with bigger surfaces or mediums.

There needs to be aerial lifts and authorisations among other things. When I first opened the Galerie Itinerrance in the 13th district of Paris, there weren’t many galleries in the neighbourhood. I liked the idea of transforming the environment where I arrived, which is the same process for urban art. An artist does it, why not a gallery owner?

I suggested to the mayor of the 13th district that we set up an open-air museum in this neighbourhood where there are a lot of social buildings – and a lot of big facades to paint. Indeed, it is a way to bring painting ‘back’ onto the street by giving it bigger and better exposure. 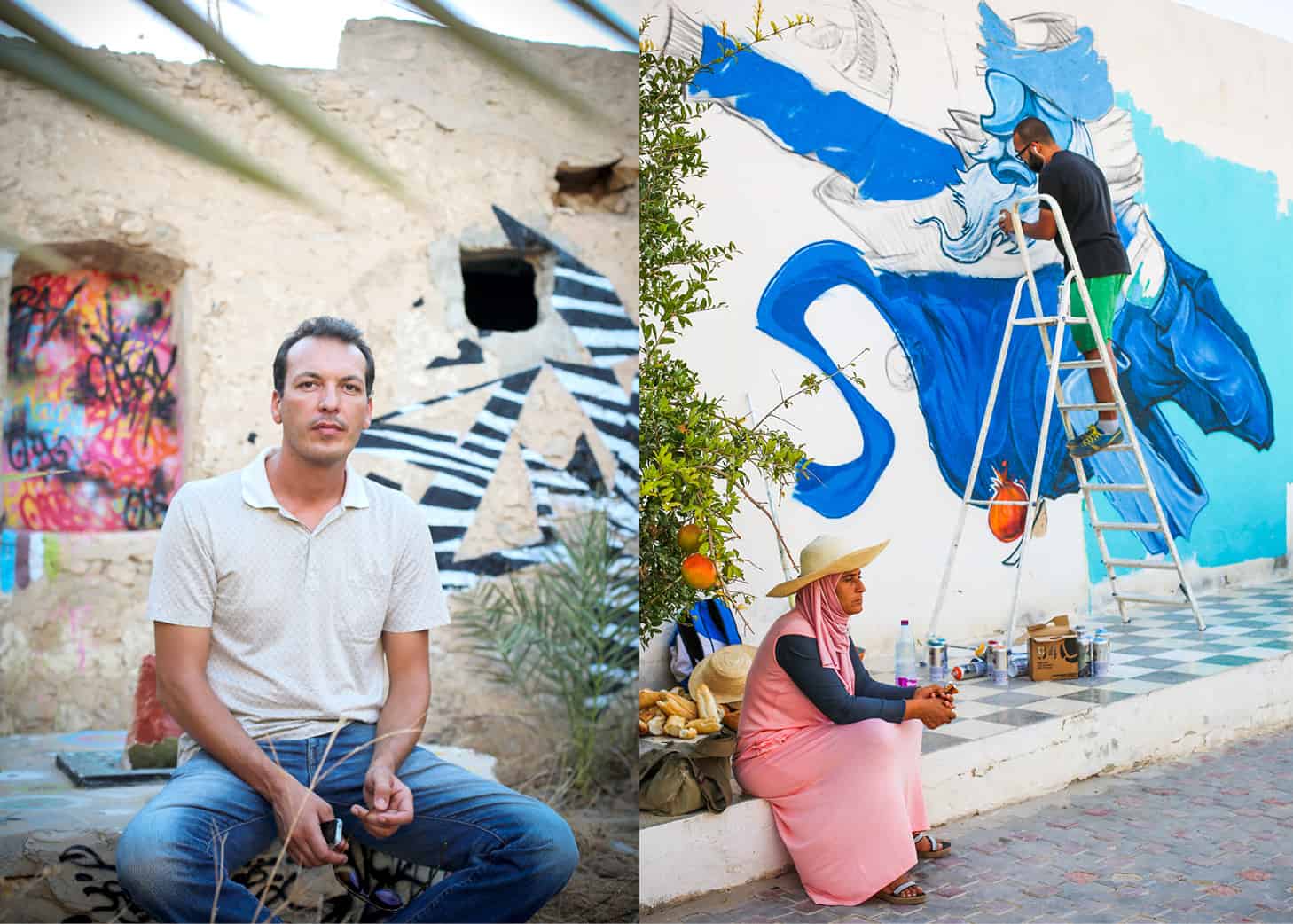 When I started Djerbahood, the artists and myself were only there for a certain period of time. The locals have to live with it from day to day, so we did this project with a form of self- censorship, vigilance and mutual respect, which is probably the key to its success – like a bridge between two shores.

What was an artistic project almost became a social one, in terms of infrastructures and the new incomes that the locals get from this project due to increased tourism. Hence, this open-air museum belongs to the people. They want to maintain it and we’re working on it so it can be viewed in the long term.

The artworks are varnished, we installed lamps so they can be seen at night despite the poor public lighting, and we hope to make a football or a basketball court in ‘The Hood’ so the kids can take advantage of the place and of the walls, and reflect on them. Under the best conditions, the walls can last up to 15 years, but the atmosphere is very humid in El-Riadh, it may not last as long. But it does not matter – when it fades away, we will paint again, other artists will come and this is what makes it a street art ‘museum’ – something always in evolution, never motionless.

What does the future hold for you? Should we be looking out for more ‘graffiti museums?

Maybe – but in another shape. The principle is to find an idea, an innovation, and to never repeat the same thing.