The purple shall govern: Mary Sibande

in News Articles 2013
Share on facebook
Share on twitter
Share on email
Share on whatsapp
Mary Sibande: The purple shall govern
Standard Bank Gallery, Johannesburg, South Africa
The purple shall govern, the exhibition of work by Standard Bank Young Artist Award winner for 2013, Mary Sibande, concludes its national tour at the Standard Bank Gallery.
This exhibition takes Sophie, the elaborately costumed figure for which Sibande is best known, to a new level: a deeper, somewhat darker exploration.
Sophie, the complex alter ego through whom Sibande has negotiated the personal narratives of three generations of women in her family, has served Sibande well as the vehicle through which she has explored the construction of identity in a post-colonial South African context.
Now Sibande has decided that it’s time to move on, to ‘let Sophie go’ and allow new ideas to take root and grow. 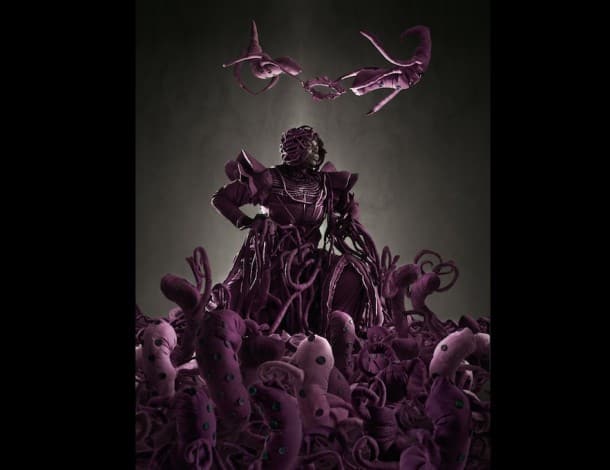 The transition is dramatically staged. A terrible beauty is born (2013) shows Sophie clothed in purple, being stripped of the white apron and bonnet that symbolise her domestic servitude, by the Non-Winged ceiling beings (2013) which extend from her body and garment and to which she appears to be giving birth. Sophie appears to be in a trance, occupying a space of uncertainty.
The admiration of the purple figure (2013) reveals a different relation of the subject to the crowd that surrounds her: a moment of welcome and veneration. The ‘new’ Sophie looks more in control and the creatures that crowd around her feet appear to be looking up in admiration, vying for her attention and rejoicing at her emancipation.
The struggle to let go of the old, and welcome the liberation it brings, is further evidenced in A reversed retrogress scene 1 (2013), in which we see the ‘old’ Sophie and the ‘new’ in an encounter that is unequivocally tense but veiled in ambiguity.
Viewers who have seen The purple shall govern in galleries in other parts of the country are in for a surprise: new works have been created specifically for the exhibition at Standard Bank Gallery!
Sibande’s new artworks invite viewers to meditate on the meaning of the self in a state of transition, and to wrestle with the internal conflicts that arise in the struggle to let go of the past in order to give birth to new ideas and new identities.