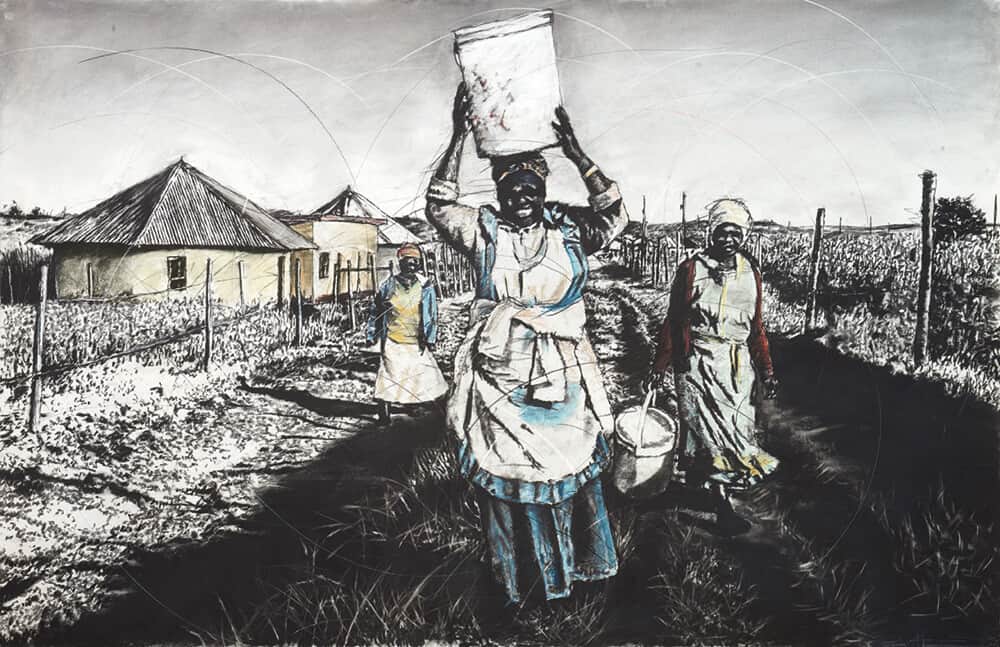 The exhibition of Qunu drawings by Phillemon Hlungwani was remarkable in that the work sold out before the exhibition opened, even though there was a price tag of R300 000 on each work. This young South African artist has become a rising star in the art market and the iconicity associated with Qunu, Madiba’s birthplace, was an added incentive for the buyers of these accomplished charcoal drawings. 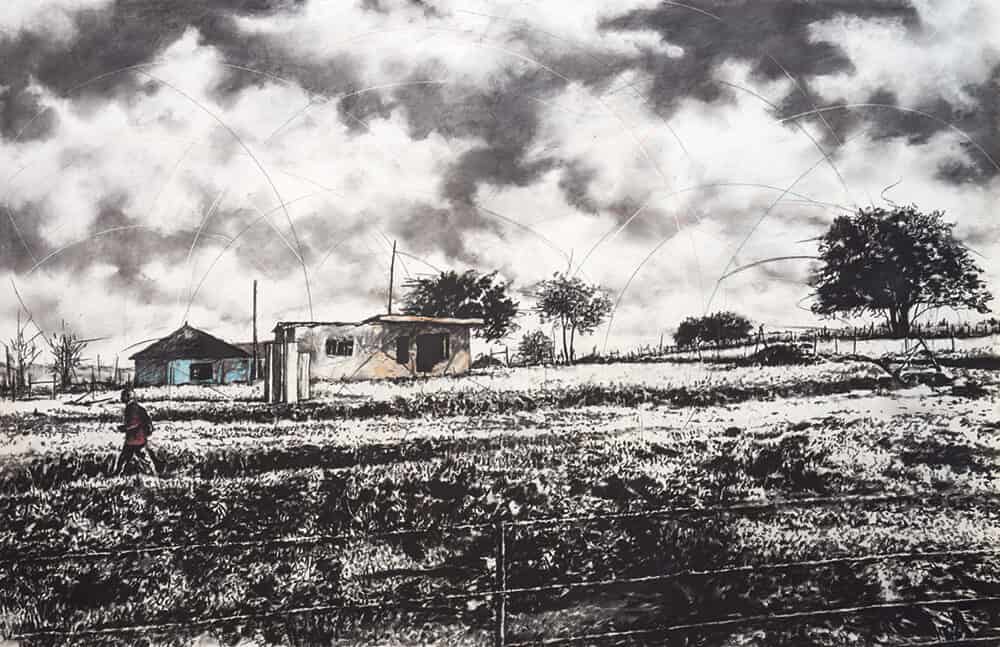 In trying to comprehend this level of success for a review of this exhibition, I asked myself what makes these eight charcoal drawings and supplementary works so unusual that they were immediately snapped up, realising a value of close to R3 million. It seems to indicate an emerging phenomenon in the South African market where young black artists, some of them having honed their skills at Artist Proof Studio (APS), such as Phillemon Hlungwani, Nelson Makamo, Bambo Sibiya and Senzo Shabangu have been catapulted to superstar status. As the co-founder of an organisation founded for the very purpose of giving financially underserved artists an opportunity for excellence, it is both gratifying and fascinating to witness their extraordinary commercial success as professional artists. These artists have not been formally trained at a university, and entered APS because of a combination of extraordinary talent, dire financial circumstances and poor schooling. APS found patrons or sponsors to support their three years of printmaking training and, subsequently, all of these artists have continued for at least two additional years of post-graduate professional development with exposure in the art industry. In the past five years, since joining the Everard Read Gallery, Hlungwani has had at least six solo shows, many of them sell-outs. His prices starting from R2000 to R5 000 per print have rocketed ten-fold in a space of two years, and now are priced up to 20 or 30 times their starting value. Much has been written about frenzied collectors attempting to acquire everything associated with Madiba in the year of his passing. While the Qunu drawings by Hlungwani reveal none of the direct opportunism in marketing the Mandela icon-as-brand, Trent Read, the elder son of the late Everard Read recognised the commercial viability of this project and approached Hlungwani with the idea for this series of work. Accompanying the artist to Qunu, Read realised at once that Hlungwani had a deep understanding of the reality of the landscape, as this was the environment in which he grew up, herding goats like many rural South African boys; here, Hlungwani’s story and his work are firmly grounded in place and reality. The landscapes are filled with recognition, and empathy. The community of Qunu is still in mourning for their father, and there is a visceral sense of loss and emptiness. Shadows scar the landscape, evoking both past and future. 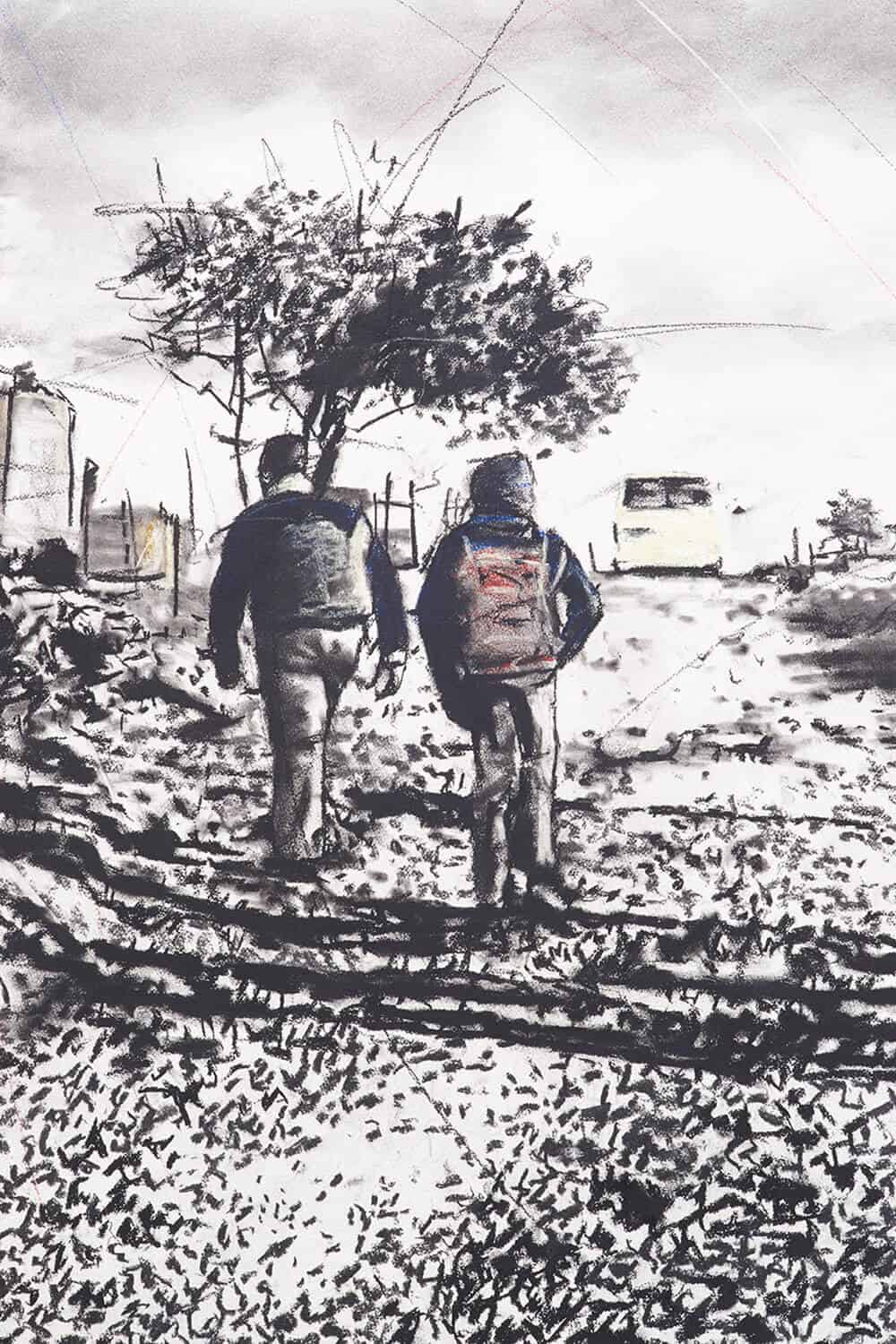 The drawings are majestic in scale, hints of colour warming the black and white early morning or dusk with soft tinted light. Hlungwani’s iconic energetic lines circling the sky are muted in these works, carrying the muffled sound of voices, dogs barking, a voice crying, another laughing perhaps. There is a profound stillness that holds the emptiness of a life force, a loss for the village, for the country; a beam of light in the world, snuffed out.

Hlungwani comes to the landscape from the ‘authentic’ position of a black artist from a rural background, not unlike Mandela himself. His representation is uncontested. Many APS artists have experienced a resurgence in the acquisition of their work, in part because big corporates are able to reflect a current ‘South African image’ by identifying their brand with the aspirational imagery of these emerging artists. As such, Hlungwani’s work has become a sound investment for collectors.