In light of yesterday being World Refugee Day, ART AFRICA would like to celebrate an initiative that has creatively empowered both communities and refugees as well as create international awareness – The Refugee Food Festival.

Some governments are more dedicated than others at integrating refugees and asylum-seekers. But as the numbers of displaced peoples reaches a new high – the United Nations Refugee Agency’s (UNHCR) latest report indicates 70 million forcibly displaced people worldwide – communities have been forced to create innovative ways to integrate refugees into their communities, mostly turning to the arts to achieve this.

What began as a citizen initiative has now developed into a global food festival with 15 cities participating world-wide. Launched in Paris in 2016 and developed by the Food Sweet Food association, the project aims to integrate refugees through the celebration of food and cultural diversity. 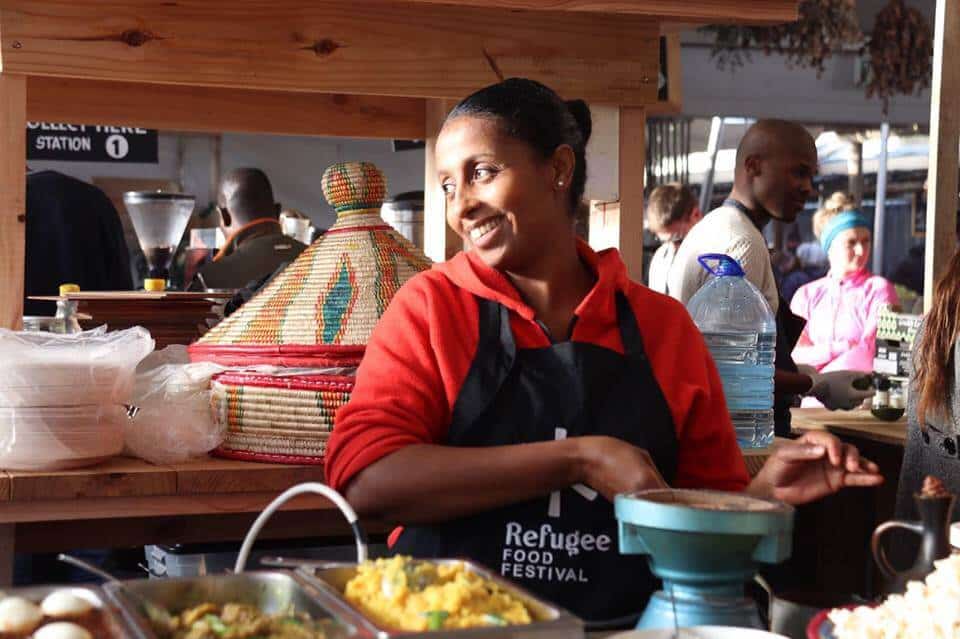 The festival runs over 18 days offering a platform for refugee chefs to exchange knowledge and display their skills. Not only does it showcase refugee talent, but it also unifies communities as they enjoy learning about different cultures through food. This year 100 participating restaurants opened their doors to approximately 100 refugee chefs, giving them an opportunity to become ambassadors to their home countries.

Just this month a rescue vessel carrying 600 refugees was denied safe access into any European ports, until Spain’s Prime Minister eventually offered the vessel a place to dock in Valencia. More recently the Trump administration has adopted a zero-tolerance policy whereby families are separated if caught attempting to cross the Southern US border illegally – a policy that Mexico’s Foreign Minister has called “cruel and inhuman”.

The act of fleeing one’s home – crossing borders and geographic barriers – is a giant feat when considering children, pregnant women and the elderly undergo these migrations too. But what is often undermined is the challenging journey that begins for those that make it to their host country as a refugee or asylum-seeker.

Not only faced with language barriers, harsh economic challenges and issues with cultural integration, refugees often encounter hostility from the locals in the form of xenophobic violence, micro-aggressions and lack in support or opportunity. Although the admittance of refugees across borders has been highlighted as the real bone of contention, what of the integration of these people once they have arrived in the so called place of protection.

Creativity and Art are powerful mediums with which to bring people together, especially as we face a global refugee crisis. Giving people the opportunity to express themselves honestly assists with communication and allows for refugees to feel valued. Apart from emotional and psychological benefits, initiatives like the Refugee Food Festival create employment, opportunity and the potential for real social cohesion.

The First Refugee Food Festival to be hosted in Africa will be taking place in Cape Town, South Africa from 16 – 26 June 2018. See event link here