The Revolution of it All: Andrew Lamprecht in Conversation with Khaya Witbooi

in News Articles 2013
Share on facebook
Share on twitter
Share on email
Share on whatsapp
Andrew Lamprecht speaks to Khaya Witbooi, a multi-media artist that uses a combination of stenciling and oil painting to express his observations, usually of a socio-political nature. The result is edgy and urban with an African relevance. Topics like the seeming failure of democracy to provide solutions to problems related to post-colonial and post-apartheid South Africa, human behaviour in this context and the effects of globalisation are dealt with regularly.

“I’ve taken it upon myself to make a statement of a concerned citizen. I’m not expecting people from around the world to do it before I do. If there’s any person to make the first comment, it is the person who feels it immediately, and I’m that person,” says Witbooi.

This interview appears in full in the inaugural edition of ART AFRICA, ‘Becoming African,’ which will be launched at the FNB JoburgArtFair 2015! 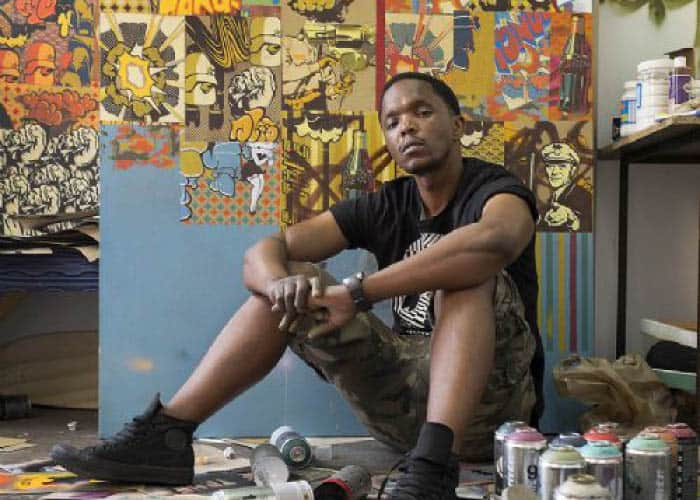 ABOVE: Khaya Witbooi in his studio. Image courtesy of Worldart.
Andrew Lamprecht: Khaya, your recent upward trajectory is incredible – as soon as you produce a work, it’s sold. Could you tell me what this means for you; especially in light of your work recently being bought by the Iziko South African National Gallery. At the same time, please tell me about the journey you’ve taken to get here?
Khaya Witbooi: The way people respond to my work is always surprising. The first time I walked into Worldart, my current gallery, I approached Charl Bezuidenhout – just to see what he was going to say about my work. He was the first person I ever approached with an artwork.
So, I went to see him with an unfinished painting and his immediate response was “Put it on the wall, this is going to look good here.” I tried to remind him that I only came in for an opinion, but he insisted it would look good. He then took it next door to an antique shop owner, to ask for his opinion – and the shop owner ended up buying my work, then and there! That affected me, and while it seems so simple, it surprises me all the time. I started making art in 2011 and since then I probably have one unsold piece. But there are no certainties, and I don’t have a formula – I do put in enough work and hope that it maintains that same appeal and reception.
What about your training? Your works are very skilled…
I come from a very artistic family; my dad is artistic, one of my brothers is a graphic designer and the other an architect. So, for me the training wasn’t about having to attend a tertiary institution, I was always aware of and passionate about the arts. Art wasn’t offered as a subject at school but I had a group of friends and we would sit like a crew of people who did drawings and made art.
Your work has really developed. You’ve stuck to your own graphic style and you draw from so many sources – from music, popular culture, art history, and obviously street art and urban art – yet it still remains very South African or at least, African. Can you talk about that, what are you bringing into the visual language?
First of all, I deal with issues of identity – avoiding doing what other people have already done, but also presenting a somewhat familiar aesthetic. Everything I have seen, everything I have been through and everything that is in the world I live in attaches itself to me. As a visual person, I bank colour schemes or images in my head. I prefer to see things through this filter – working on a piece is a continual conversation.
Sometimes, I’ll sit and look at an image, and wait until it gives me something interesting to say about it. If I sit with an image of a gun, knowing what other people have done with that image, I wait for the image to speak to me, to give me a new interpretation that I can claim as mine. It’s a daily journey of my life and surroundings. My work isn’t limited to South Africa – there are so many artists who do stencil work and are famous for it. But I’m trying to make work that, if it leaves the studio, still maintains a link – that it will say something about me and the way that I think.

LEFT TO RIGHT: Khaya Witbooi, Cellphone jamming (live at parliament), oil and spray paint on canvas, 150 x 130cm [DETAIL]; The show must go on, oil and spray paint on canvas, 150 x 130cm [DETAIL]. Images courtesy of Worldart.
You use stencils extensively in your work. I was amazed to see a series of prints you did, which are by nature very repetitive, but each one was completely different. Please tell me about that, about making things unique? You could easily take the simplistic approach and make fifty copies of the same image, but what drives you to make each one unique?
I think that art is taught with a focus on repetition and formulae. For me, having something that’s the same as someone else’s detracts from its worth as an art piece. I wanted each print to have its own identity – and although it’s the same thing, I’m not trying to be a printmaker so they probably shouldn’t even be regarded as prints. Maybe it’s a separate piece that’s been used several times, in different ways. I enjoy the process of making art, if I do a series of prints it’s an experiment in working with different variations – so I keep on moving and keep on doing the same thing but giving it a different feel each time I do it.
You work at Greatmore Studios now – what has this experience been like, do you find it useful to be working amongst other artists?
I think the most important aspect is that working amongst artists means that your work is always seen first by people who make art. It’s a sort of informal critiquing panel, an ongoing conversation. If you get the approval of an artist, you’ve won already. I like the fact that we are a community, looking after each other, and ideas spark off of conversations because we all have the same issues and concerns. I enjoy the constant generation of fresh and new ideas. There are also events, where artists come from outside (the studio) and showcase, screen or have talks – so it’s a complete creative hub.
Finally, what is the future for Khaya? Where are you going?
I think if I dare leave the country for another place, it would be so difficult to come back. I have been holding myself back (from making the move), thinking that the best of my work would then be made and kept elsewhere, instead of here in South Africa. The thing is, I have observed other artists, and the world out there can trap you. I want to be here, because we’re in a critical time when our contribution as artists matters tremendously. If we miss this – what is happening now, the revolution of it all – we miss the opportunity, the possibility of saying something valid. We would have missed a very big thing.

I think I still want to be in South Africa, to continue making work and supporting the things we believe in, from an artist’s point of view. I want to remain a part of the discourse, and it’s harder to do these things if you’re not in the space where it all happens.

At present, though, I have a solo exhibition at the FNB JoburgArtFair, which is incredibly exciting. My show, titled ‘Origi-nal,’ talks about how our culture and humanity has become void, filled with a borrowed, foreign identity. We are losing our sense of Ubuntu, so I wanted to explore what we call ‘our culture’ and how it affects our daily lives.

Andrew Lamprecht is a curator and lecturer at the Michaelis School of Fine Art (UCT).