Rise and Fall of Apartheid: In Conversation with Okwui Enwezor 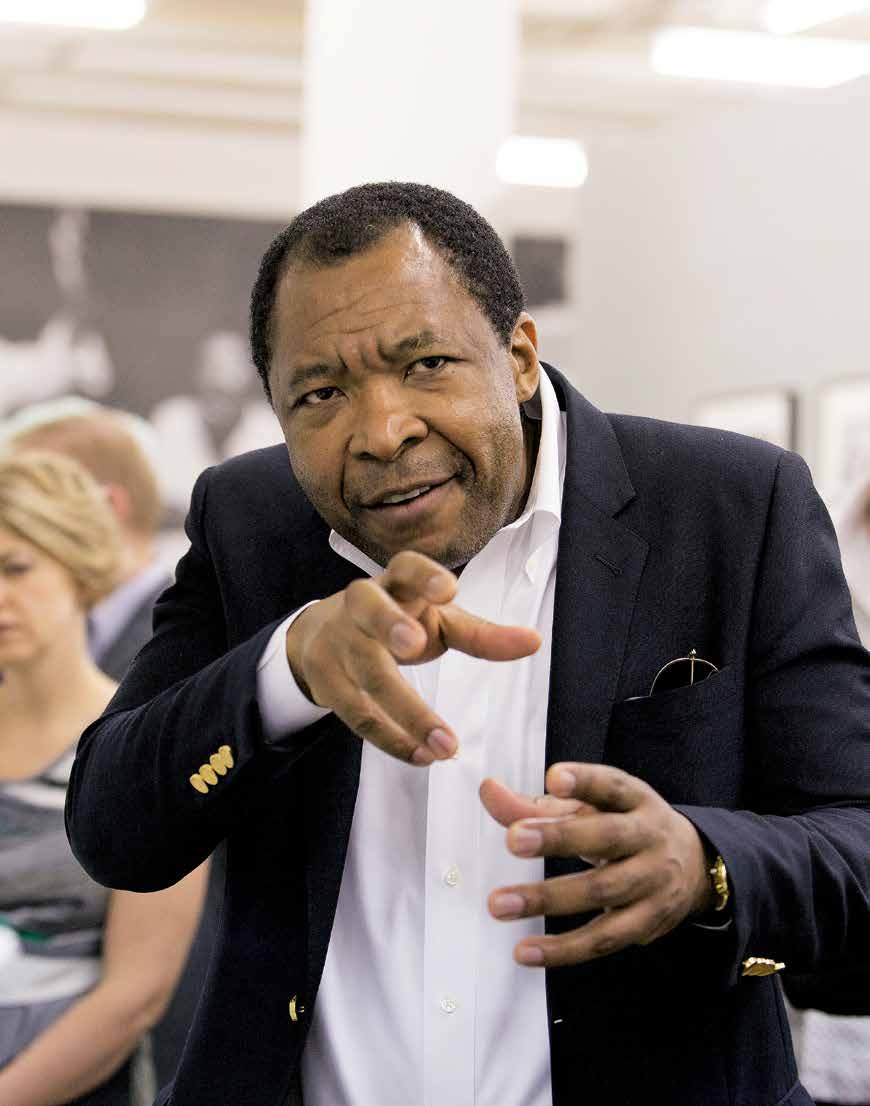 Okwui Enwezor’s dramatic walkabout at ‘Rise and Fall of Apartheid‘ in Johannesburg. Photograph © Masimba Sasa. Courtesy of Rise and Fall of Apartheid
MATTHEW PARTRIDGE: I suppose what ‘Rise and Fall of Apartheid’ is really addressing is the sum of the moral and ethical certitudes that people had in documenting a very important part of history. For me at least, the exhibition goes beyond the simple format of social documentary, there is something else happening…
OKWUI ENWEZOR: Yes, I’m very glad that you’ve brought up this particular point. When you look at the banner, ‘Rise and Fall of Apartheid’, one would immediately assume that an exhibition of this kind would be about good and bad, evil and the non-evil, victims and oppressors and winners and losers and so on… but it would be an oversimplification not to see other things in operation in the show. Let me give you an example: we often think about Drum Magazine, how brave the photographers were and the stories that they tell about being arrested and so on, but what we often at times do not really reflect on, is how Drum had to survive by practicing a certain form of soft censorship of itself. That means that the editorial policies of Drum, the policy of the proprietor of Drum, while trying to shed light on apartheid, also had to tread very carefully… that means the withdrawal of images from the public sphere that were incendiary. So Drum was really about the contradictory notion of the 1950s as being this period of renaissance just as the Apartheid state was being put in place. We have all these fantasies of the shebeen life, of jazz clubs, the showgirls and writers, and there is this certain romance that Drum produced, but also a nostalgia, that in a sense may seem to be antithetical to the very radicality we ascribe to it. So how do we tease these things apart? How do we look at the layers of ambivalence that surround the entire enterprise of the Apartheid visual production? Then there is the ethical place of the photographer, vis-à-vis the photographer who works within the economy of the mass media who has to capture a story that resonates and will convey certain qualities, be it in Life Magazine, in Drum, or Picture Post.
There is also the photographer who seeks a withdrawal, who works as a free agent, and the choices that they have to make in the production of the images. So many of these discourses are in the exhibition. The exhibition particularly enagages the tension between social documentary on the one hand, and the essay genre of photography and pure photojournalism on the other. So if you look at Afrapix, its language is this carefully manufactured analytical view of distance and objectivity and the eradication of that analytical view for immediacy, the potency of the image. and the unmediated spectacle of the event. The Bang Bang Club had these ethical and moral positions…and how do we read those things? We have a complete section where we look at Santu Mofokeng’s ‘Train Church’, Lesley Lawson’s ‘Crown Mines’, David Goldblatt’s ‘The Transported of KwaNdebele’, Zwelethu Mthetwa’s ‘Crossroads’, and Gideon Mendel’s ‘Living in Yeoville’. These are photographic essays that defy the language of social documentary and the language of photojournalism. They do something entirely different that takes a much more ambivalent, sometimes even ambiguous stance vis-à-vis image production. So what I’m hoping for in the exhibition is that while we see a lot of resistance, a lot of fists and blood and so on, we begin to really look at the language of photography itself in the exhibition, and this is what I really want to bring across.
It really opened a window on history that I have been working with, particularly with Sam Nzima’s reportage of the 1976 Soweto Uprising and how his image of Hector Pieterson has really flattened out a lot of these similar images and how the index moves to icon, thus flattening the indexical register as images become iconic.
Well, this is a thing that you’ll notice in this exhibition is that certain images have careers. Maybe this is what you ascribe to the iconic status of Sam Nzima’s photograph of Pieterson, to the point where a certain type of glaucoma emerges in being able to picture Sam Nzima having done anything else. He becomes condemned to this image and he is chained to it…there is nothing he can do to extricate himself from that image. In looking at 1976 and looking at people like Noel Watson’s work, we begin to start taking a little step back to question the codification of the memory of 1976 by only a very small body of photographic work vis-à-vis Peter Magubane’s own story of 1976. They’re great images no doubt, but there is certainly a kind of disproportionate historical space that the photographs have taken up. There’s something I want to show you, come with me…
To read the full interview, get the Art South Africa App and download the FREE July Digital Edition.
The full interview also appears in the current print issue of Art South Africa magazine (Vol 12 Iss 4, Sep 2014).
For more on ‘Rise and Fall of Apartheid’ go to http://riseandfallofapartheid.org/