in News Articles 2013
Share on facebook
Share on twitter
Share on email
Share on whatsapp
‘The “So Called” Emerging Black Artist’ is a group exhibition featuring three prominent South African artists; Professor Pitika Ntuli, Mbongeni Buthelezi and Vusi Mfupi at the Constitution Hill, Hillbrow Johannesburg. Curated by Gaisang Sathekge, this well-timed exhibition questions the ‘perpetual emergence’ of black artists in art history by pulling together artists who work within the recycling process to reinterpret discarded objects in order to give them a new life and meaning. Khehla Chepape Makgato visited the exhibition and spoke with the curator and artists involved. 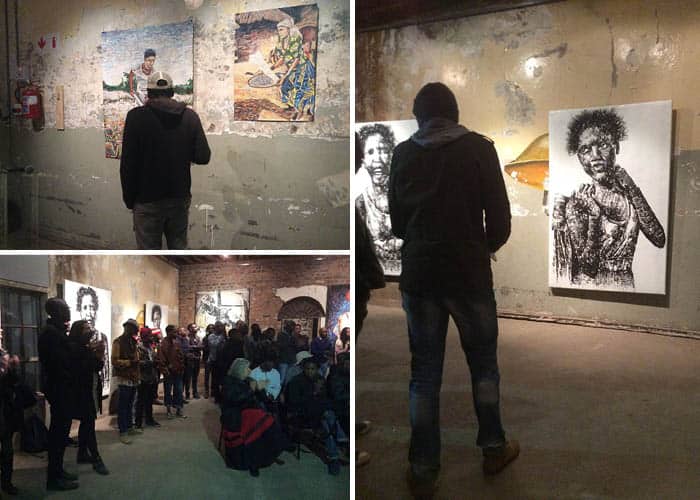 Photographs by Khehla Chepape Makgato.
According to Sathekge, this group show “addresses the way black artists, within art historical canon, have been stereotyped and their subject matter and style understood only within the framework of terminology such as township art or ‘folk-art’ while their white counterparts dominated and continue to dominate the industry economically.” The resulting exhibition is an account of the artistic standards used in categorising artists based on race and class while addressing the gaps that exist therein.
Walking through the corridors of the Old Fort Mess Hall at Constitution Hill (home to the South African Constitutional Court) one is met by Professor Pitika Ntuli’s large crowd of protesters, sculpted ghosts in human form. Made from fragments of the discarded wreckage of industrial society, their provocative presence is immersive. Ntuli’s sculptures represent the mineworkers mowed down by the state police force on the fateful day of 16 August 2012, when mineworkers were killed fighting for their rights to a wage increase in what is now known as the “Marikana Massacre.” The towering figure in a green blanket represents Mgcineni Noki, affectionately known to his co-workers as ‘Mambush.’ Although at the time his identity was not known, ‘Mambush’ was a notable leader known only by the green blanket he wore. He featured prominently in TV footage leading up to the shooting of 34 miners at Marikana and was killed in the crossfire.
Made from wheelbarrows, spanners, drains grids, spades and forks, hoes and picks, welded car parts and twisted corrugated iron sheets, Ntuli’s work is an incantation of the workers’ sweat, blood and tears– echoing a betrayed dream in South Africa’s Freedom Charter:  ‘The People Shall Share in the Country’s Wealth’ and ‘There Shall be Work and Security’.
On the far right hand you notice what looks like a stage where union leaders or executives are in a press conference. Instead of seeing a human figure on stage as expected, there’s a dove, seemingly in flight with a flower in its beak.  The smaller human figures are depicted as weak interpreters or spin-doctors. “The stage is a metaphor for a John Vorster prison building,” says Professor Ntuli on the opening night of the show. The Vorster prison is a symbolic monument of a justice system that favours only the black elites and rich whites. As the ANC Deputy Secretary Jessie Duarte puts it, the police station was a “true embodiment of the violence of the apartheid system.” This violence continues to haunt us, hinting that we remain an old state dressed in the new clothes of ‘DEMOCRACY’.
“To sculpt is to create a work of art by a series of destructions – violent acts as chisels cut through wood or stone; angle grinders slash through bones; and an electric saw searing through and massacring forms – driven by a desire to leave only one single form as the ultimate!” Ntuli once said about his work.
Inside the Old Fort Prison Complex, where many of South Africa’s political activists, including Mahatma Gandhi, Nelson Mandela, and Walter Sisulu were detained, the exhibition continues with Mbongeni Buthelezi’s large works made from discarded plastic bags and works made from old pages of magazines by Vusi Mfupi.
What was once a place of injustice and ruthlessness now exudes the triumph of the human spirit. However, the struggle for liberation has not ended with the Sisulus and Sobukwes but continues with the generations that succeed them. Mfupi retells the stories of daily struggle that poor South Africans – both black and white – face at traffic lights as they beg for coins from passing drivers. His work speaks of fellow citizens, homeless wanderers forced to the streets. Mfupi’s work also depicts the illegal boarder crossings of foreign nationals into the country, especially at The Beitbridge Border between Zimbabwe and South Africa.
Talking to the artists in ‘The “So Called” Black Emerging Artist,’ I am struck by the imperative to not categorise the work of art based on race or educational background. Many of the self-taught black artists in South Africa came to be as a result of colonialism or phenomena related to it. Renowned South African artist Dr. David Koloane sheds some light on why black artists forever ‘emerging.’ “The self-taught image used by white reviewers referred more to black African practitioners more than it applied to white artists, most of whom were formally trained and have acquired tertiary level education.”
Recycling as an art medium, like the African ancient oral history, expresses the collective soul, the way of thinking, the traditions and values of a people through the eyes and philosophies of the artists presented in ‘The “So Called” Emerging Black Artist.’ As Mbongeni puts it “Professor Ntuli’s pieces reminded me of same era in terms of the execution and the approach in his handling of materials in negotiating his forms. It is a typical example of how we black artists can at times respond to the materials available at our disposal.”
Throughout history, art has remained a powerful platform for social expression and provided society with a window through which to view and assess communities. The role of art to communicate the realities of life must not be understated by simply boxing artists into the terms that suit the speaker.
Khehla Chepape Makgato is a Johannesburg-based independent artist and arts writer for ARTsouthAFRICA. 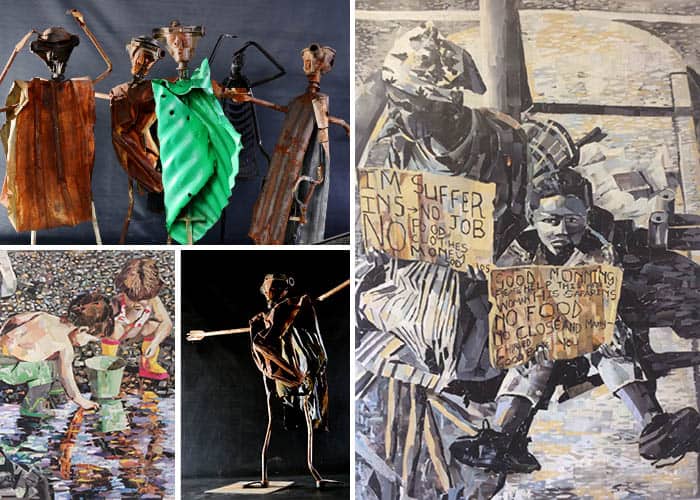