‘The Space Between / The Noise Behind:’ Liza Grobler and Norman O’Flynn at Fried Contemporary

Ashraf Jamal pays a visit to Cape Town-based artists Liza Grobler and Norman O’Flynn at the Upper East Side Studios in Salt River, Cape Town in the lead up to their upcoming exhibition ‘The Space Between / The Noise Behind’ at the Fried Contemporary in Pretoria on the 25th February 2016. 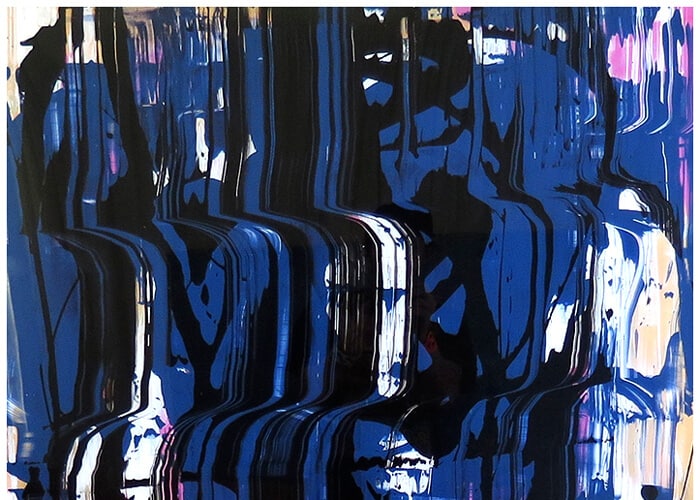 The Upper East Side Studios in Salt River, Cape Town, is the classic artist’s vault — the massive open-plan arena cut up by portable divides, the artists shifting smoothly between their private creative worlds and caffeine-fuelled chat breaks.

I’m here to see Liza Grobler and her partner Norman O’Flynn who are readying works for a joint show at the Fried Contemporary in Pretoria. Billed as ‘The Space Between / The Noise Behind’ the show is a curious mix of art and quackery, or as Grobler puts it — ‘pseudo-science’. What both artists recognise is that art is always provisional, intangible, that at best all it can do is piggy-back reason with feeling.

If O’Flynn’s monochromatic reverse glass paintings read like an enigmatic graph, the dripping squeegeed paint veering left then right like a pulsing truth-telling machine, then Grobler’s works with their fractal bursts of colour in a dark void and their staggered electric blue lines made of fuzzy-wiry pipe cleaners convey a more muted sense of that greater vault encompassing us — the universe. 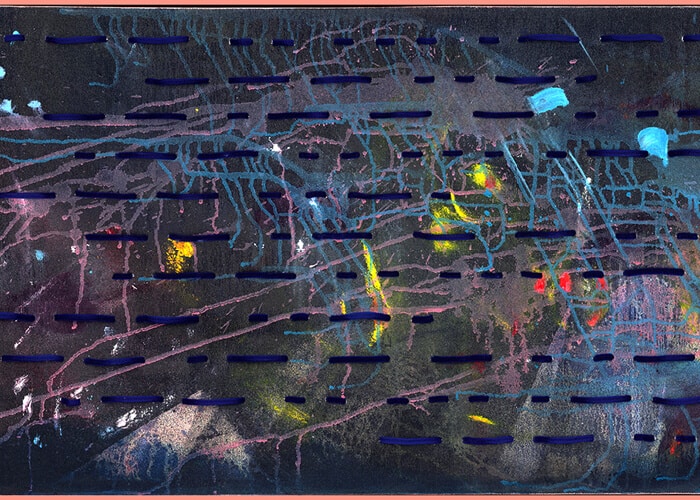 The staggered blue lines are a kind of Morse code, their meanings a series of oblique three word phrases such as ‘no such thing’, ‘into the deep’, ‘far far away’. Like O’Flynn’s pulsing graphs, these works conjure the prevailing noise of some extra-terrestrial intelligent life. As David Bowie predicted long ago there is life on Mars, and as scientists at the SKA — the Square Kilometre Array — in Carnarvon have since incontrovertibly confirmed, the universe has its own uniform and invariable hum and buzz.

Mystics equate this interstellar hum with the Buddhist mantra – Om or Aum. The Christian and Islamic words, ‘Amen’ and ‘Amin’ are said to derive from this ‘eternal syllable’ which is believed to include all of the past, present, and future. Whether this is indeed the case (and why shouldn’t the universe have its own personalised ringtone?) what persists is the awesome otherworldly thrill that comes from getting the faintest of data from the deepest recesses of space.

It is this thrill which Grobler and O’Flynn are generating. They are not just making wall-art but flipping the gallery’s white cub into a concave cavity and a sounding board — the better to make us think and feel more intuitively about the mysteries of the universe.After all, the universe is not just out there, it’s inside each and every one of us. Through a mix of abstraction, myth, and science they are compelling us to take a deep breath, pause on the treadmill of monotheistic faith, and remind ourselves that maybe, just maybe, we really don’t have a single foundational clue regarding our origins. 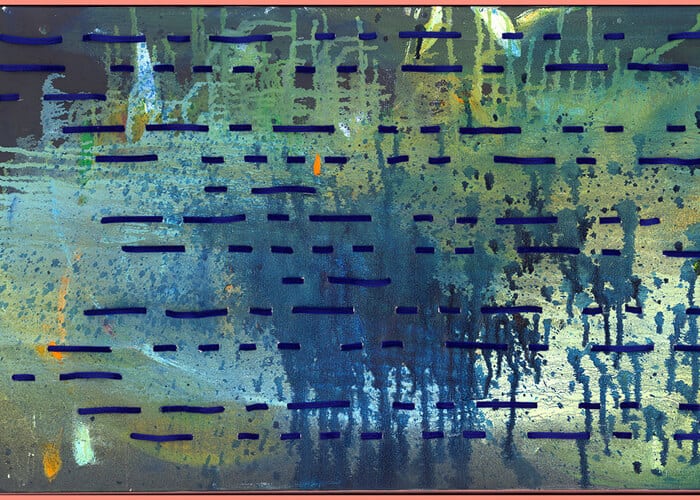 If Grobler’s stitched and painted canvases are ‘fabricated images of outer space’, they are also ‘inner landscapes’ — worlds in a proverbial grain of sand. Like O’Flynn’s truth-graphs, they are as invested in the infinite as they are in the molecular and cellular. Her works are ‘signals into the abyss’ says Grobler. Here I’m reminded of a warning by Nietzsche: ‘Battle not with monsters, lest you become a monster, and if you gaze into the abyss, the abyss gazes also into you’.

Being in the world is an unnerving two-way street. Or rather, it’s a broken white line in the centre of that imagined street: In sum, we really don’t quite know just why we’re here, where we’ve come from and where we’re headed. And perhaps Steve Jobs was right when he said that death is life’s greatest gift. We live, we die, the rest, just about everything, is a riddle. “I’m taking a dot for a walk, then it becomes a line,” says Grobler. Her electric blue Morse code is this line — a sum of all the fragmented phrases and phases that make up a life. 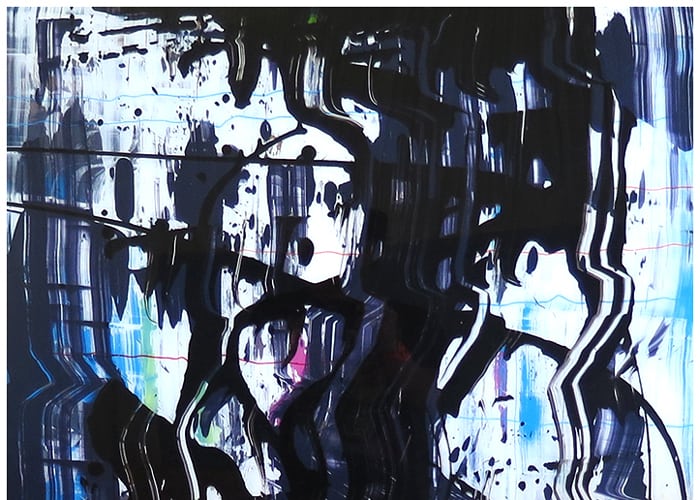 With the launch of the first Nano satellite from the African continent in 2013, inquiry into deep space gains rapid ground in South Africa. With the global interest in our Square Kilometre Array, the hub that confirmed our universal hum; or SKA7, the largest telescope in the Southern Hemisphere located in Sutherland, there is no doubt that our passion for the unknown is growing — at the precise point, incidentally, when a craven reversion to fundamentalism rockets. That Grobler was involved in a deep space awareness campaign in Khayelitsha, where the South African satellite ZA-cube was dubbed ‘Tsepiso’ — Sesotho for ‘promise’ — is a reminder of this brave new world we’ve finally embraced.

What O’Flynn and Grobler have given us through their art is a way to think upon and feel the omnipresence of dark matter and white noise. They have used a visual medium to sound out those ‘light pulses’ that form the playlist of our inexplicable lives. Like the Aboriginal songlines that sing the world into existence, their artworks are enigmatic graphs and codes signalling a universal hum.

Ashraf Jamal is a Cape Town-based cultural analyst, writer and educator. He is the former editor of ARTsouthAFRICA and currently lectures at Cape Peninsula University of Cape Town (CPUT).

‘The Space Between / The Noise Behind’ will open on 25 February 2016 at the Fried Contemporary in Pretoria, and runs until 26 March 2016.