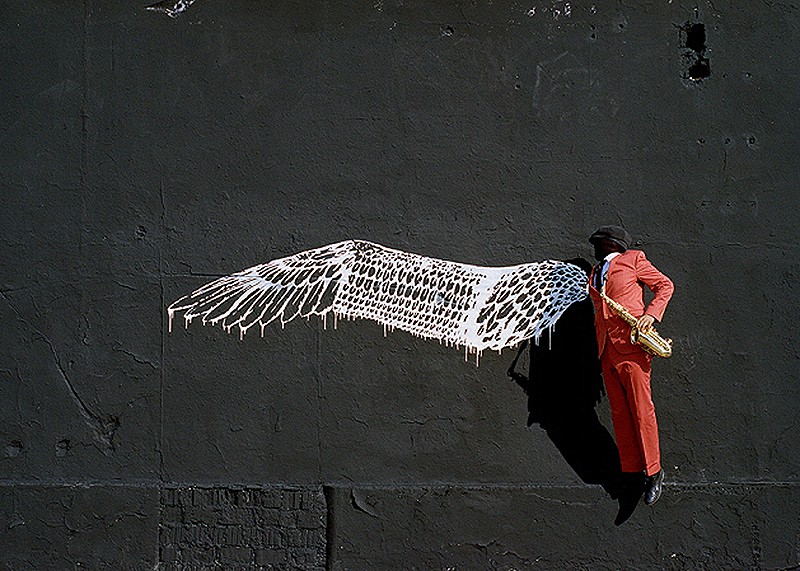 ABOVE: Robin Rhode, Birdman (2014). Image courtesy of Kulturhuset Stadsteatern
Franz Kafka’s short story ‘The Sudden Walk’ (‘Der plötzliche Spaziergang’) consists of two sentences. It describes an awakening, how a person who has just settled for the night is suddenly seized by restlessness and sets off from his cosy home on a nocturnal walk.
This urge to do something unexpected is not uncommon in South African artist Robin Rhode’s art. His drawings are impulsive, made directly on asphalt or a wall, with traces of erased lines in charcoal and chalk. The subject matter often relates to desires, the dream of owning a particular object; a bike, a champagne bottle, or some other symbol of wealth. Like short stories, Robin Rhodes’ images oscillate between the inner and outer world. The simple sketches distinctly place us spectators somewhere in between the real world and an imaginary world—a scenario that the artist invites us to.
Robin Rhode was born in 1976 and belongs to the generation of artists who grew up after apartheid. Johannesburg was his earliest canvas, and people there could soon follow him on his walks. With a few rapid chalk marks or a street performance, he would comment on everyday life or the current political situation.
“Many see me as a street artist, but I reinterpret and filter my art through art history in the same sense that a DJ makes remixes of existing tracks,” says Robin Rhode. He is equally inspired by street culture, and film and art history.
Today, Robin Rhode lives and works in Berlin, where, among other things, he has explored Dutch architect Gerrit Rietveld’s modernist chairs. His wild interpretations suggest entirely new ways of using them, as in Piano Chair (2011), where the chair is transformed into a prop in a violent attack on a piano that brings to mind street violence.
Robin Rhode’s works often consist of both a drawing and an enactment in which the artist plays with illusions. The work is documented and presented to the viewer in photos or animations that record the event in a style resembling comics. He often interacts with the drawing, as though it were a physical object. One of his references is the initiation rites students at his school subjected each other to, such as forcing someone to ride an imaginary bike drawn on the lavatory wall.
Here, instead, Robin Rhode himself plays the different characters trying to carry out the “impossible” tasks. These attempts to reinvent reality are imbued with a poetic and romantic charge. Alternately, they reveal our futile yet universally human aspiration to satisfy our own desires.
For more information, see here. The exhibition will be showing at Kulturhuset Stadsteatern from 14 February – 3 May 2015.