Lilian Nabulime is a well-established contemporary female Ugandan artist with a long history and passion for wood carving. A graduate of the Margaret Trowell School of Industrial and Fine Art (MTSIFA), Nabulime was taught by one of Uganda’s greatest sculptors, Francis Nnaggenda, whose influence is evident in her work, not only in their large scale execution but through her use of wood, most notably Kavuyo (1993) and Meeting Point (2014). 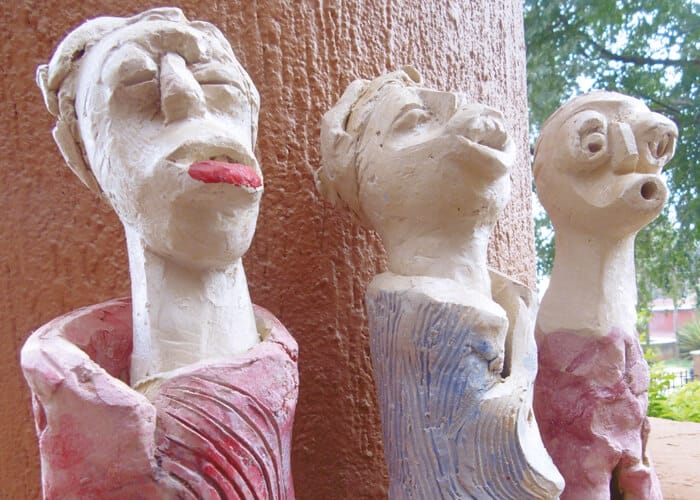 Nabulime holds a PhD from Newcastle University (UK), and is currently a Senior Lecturer at MTSIFA, Makerere University, Kampala. Her exploration and appropriation of wood and found objects (both metallic and plastic) are a source of artistic inspiration, reconstructed into sculptural forms with varying subject matter. Comprised of bold figurative sculptures, large and small mask forms, and functional everyday objects, Nabulime’s work explores social life, politics, gender, race, and disease in modern Africa. Her two exhibitions in Kampala: ‘Wood: Artistic Exploration’ (Makerere Art Gallery: 2014) and ‘Art In The Office’ (currently on show at KFW Offices) highlight her dexterity in manipulating wood.

‘Art in The Office’ comprises of exaggerated and distorted sculptural human figures (male or female) of differing age brackets, revealing various human aspects and emotions categorized into three series, namely: ‘Faces,’ ‘Beauties,’ and the ‘Jolly Girls.’ The artist expresses special attention to the ‘Faces’ series, not only through the amount of work exhibited, but in the way she exaggerates the mouth, eye, and nose parts within the scope of masks, emphasising feminity through her dramatic application of red around the lips of some of her figures. It can be argued that Nabulime’s symbolic use of distortion and exaggeration in the nature of works presented highlights changing social realities in her environment. One striking and repetitive element about Nabulime’s practice is her selective choice of materials, which not only contribute to the aesthetic outcome of the final oeuvre but also inform its symbolic representation, adding meaning to her work. Throughout her practice, Nabulime is preoccupied with the assumption that audiences find it easy to relate to or even understand artwork better if it is made out of materials that they are familiar with, and this informs her choice of materials. 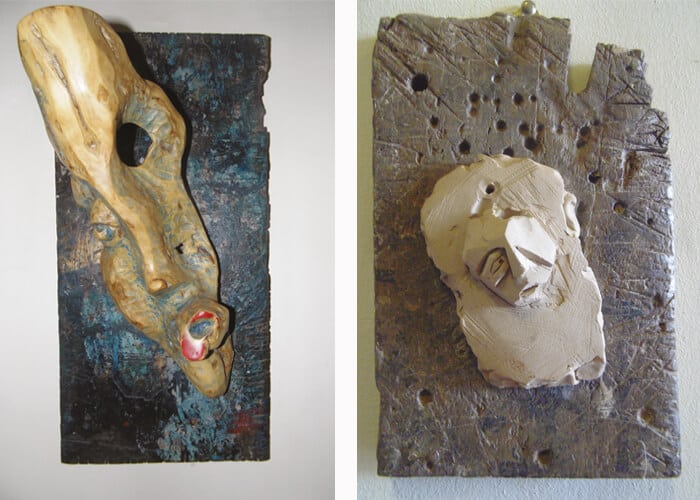 In the ‘Beauties’ series, Nabulime alludes to the vulnerability of femininity through the use of recycled soda cans, beer cans, and wood. She recreates the female body with a deep contrast – a glittering demarcation of the sexual female body parts against the wood. The artist is aware of the natural attractions of the female body, demonstrating how by virtue of conspicuousness, the female body is reduced to something as disposable as an empty beer or soda can, and how quick people are to discard these cans after their contents have been consumed.

In the ‘Jolly Girls’ series, Nabulime gives her sculptures a new identity by introducing colourful brushes on the head area to create an impression of hair. Naturally, more than men, women attach much value and affection to hair. The natural quality of African hair provides for a variety of options for women to style it. Braiding, dreadlocking and using hair extensions are some of the most common examples. Although most women prefer to keep black hair, others are interested in plaiting with colour, depending on their social status and personal preferences. This is common among urban women, particularly the middle class, who can afford the luxury of brightly coloured hair and red lipstick. Accordingly, in applying these elements, Nabulime makes a critical remark about munnakibuga, the kind of woman who would have access to such luxuries. At this point, the question of modernity is brought into the limelight.

For her doctoral thesis, Nabulime undertook a project which drew on personal experiences resulting from caring for her late husband, who died of Acquired Immune Deficiency Syndrome (AIDS), as well as her understanding of the major concepts lacking in tackling the global problem of HIV/AIDS, not only in Uganda but globally. Nabulime noticed that many AIDS victims suffered from stigma due to rejection by relatives and friends, whose knowledge about the disease was still scanty. Therefore, she resolved to make sculptures that invite people to talk about HIV/AIDS, clarifying the misconceptions about the epidemic in society. Open discussion about HIV/AIDS would hopefully bring about some ease and comfort to patients as well as their close relatives.

Although Nabulime has a passion for wood, she was challenged to work with other sculptural materials for this project. As such she used soap – a cleansing agent – to create sculptures of male and female genitals, igniting discussions about sexuality and HIV/AIDS whilst transcending issues of cultural and ethnic differences, thus communicating to a diverse audience. Nabulime used both transparent and opaque soap but she found transparent soap more interesting, conceptually, as one can easily see other materials which are embedded within the sculpture.

Historically speaking, sculpture has not been the ideal activity for many female Ugandan artists. For over two decades, amidst lecturing, Lilian Mary Nabulime’s bold experimentations with wood and other materials have put forward powerful social messages. Her contribution, therefore, to the history and current artistic fabric of Kampala and the world at large is highly appreciated.

Martha Kazungu is an aspiring curator and writer of contemporary Art in Uganda. She is currently working with the Institute of Heritage Conservation and Restoration (IHCR) located in Makerere University, Kampala.