‘They Are Greeting:’ Helen Sebidi at Everard Read, Johannesburg

In Sepedi, the pronoun ‘they’ conveys high respect, especially toward royalty and the elders. Back in the day, a person of higher rank — especially a chief or an elder — would be addressed as ‘they,’ instead of the commonly used Eurocentric greeting ‘you.’  In many African cultures, greetings don’t exclude the dead and animals. ‘They Are Greeting,’ a solo exhibition by the celebrated African artist Helen Sebidi at the Everard Read Gallery, speaks to the untold and forgotten realities of the cultural and philosophical thinking and living patterns of Africans. 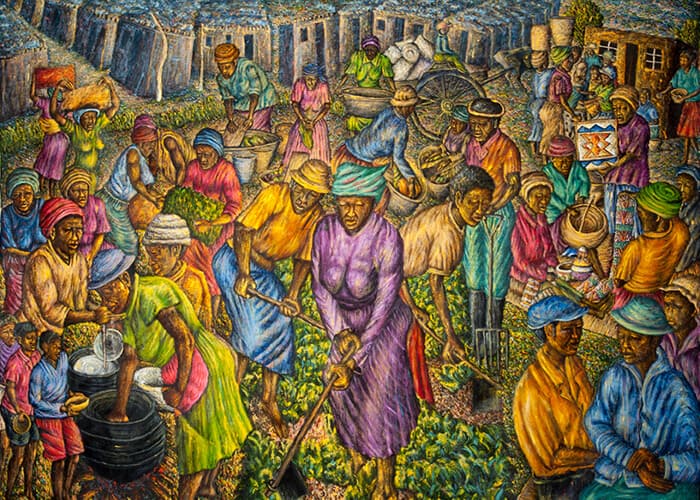 Helen Sebidi, detail of The Dispossessed, 2011-2012. Acrylic on canvas. 165 x 220 cm. All images courtesy of the Everard Read Gallery, Johannesburg.

Sebidi is a woman of many names. Born into a Northern Sotho (Sesotho Sa Leboa) speaking community, her full title is Mmakgabo Mmapula Mmankgato Helen Sebidi. ‘Mma’ – is a Pedi word for ‘mother.’ As a prefix to her name it is an indication of respect, one that is acknowledged and conferred through the title of the exhibition, ‘They Are Greeting.’

The first work that welcomes you as you enter the exhibition space is The King Praising A Spirit Bird. Some birds are sacred and interwoven into the mythology and spirituality of African tribes. Different birds carry different spiritual powers and mystical meanings. This particular bird, for instance, may be a medium which communicates with the king and his ancestors. Navigating the depth and tensile impastos that are readily layered and present in Sebidi’s painting, you are immediately confronted with the narratives of indigeneity, ingenuity, and continuity in a wistful, ageless spectrum. It is a reminder of where we have been in relation to where we are now. The king has knelt down before the bird, one hand around it while the other shakes hands. 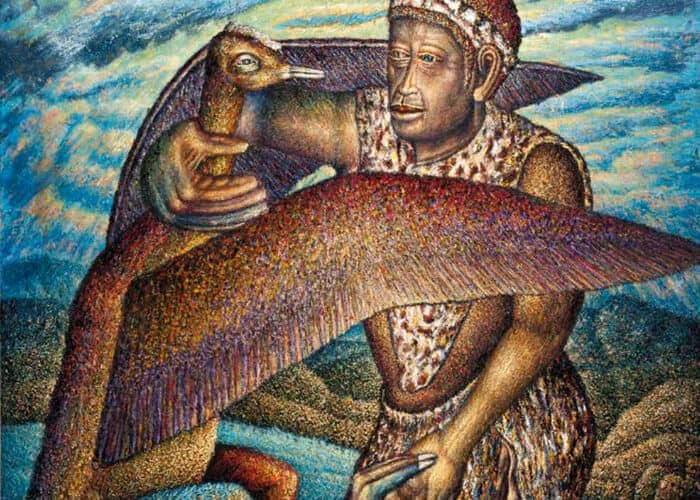 In another section of the gallery and displayed directly opposite one another on facing walls are the paintings Manhood and The Dispossessed. In Manhood we see two elderly men in the company of boys, who appear to be listening attentively to the elders. The painting depicts a highly regarded educational passage, where boys graduate into becoming men. This ritual is called Lefelo La Go Tšea Molao — a place where boys are equipped with directives, and prepared for adulthood. The Dispossessed, on the other hand, depicts a rural scene. People are working in the fields, tilting the soil, and children are being served food. Between the two, one finds a striking conversation about the day-to-day life of people in rural areas, from narratives that function as healing stories and utopias, to mythographys of psychic well-being, guiding tales and ritual embodiment in pre-colonial South Africa. 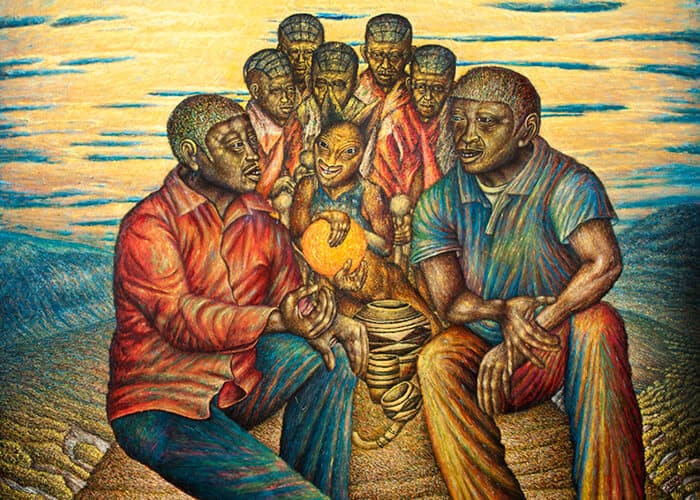 Aside from the painting, the exhibition boasts a selection of linocuts, etchings and lithographs. One of these — Bomoepa Thutse (‘Diggers of Ore’) – continues to delve into the issue of labour. There is a Pedi adage which emanates from the title Bomoepa Thutse which when elaborated, reads: Kodumela Moepa Thutse, Ga Go Lehumo Le Tšwago Kgauswi — strive to dig harder for there is no near-fetched wealth. This concept actually encouraged people to stand up and do things for themselves instead of waiting on someone else. When simplified it says ‘no one owes you anything, you actually owe life to live and make a difference, no matter how small.’ 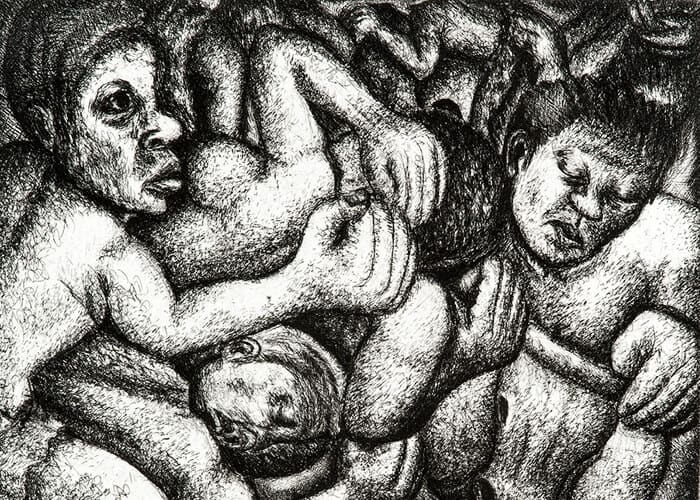 Part of the crux surrounding Sebidi’s work is the philosophical, religious and cultural argument that her style is distinguished among her contemporaries and ultimately the South African art landscape. Talking about Sebidi’s work in a taxi art books series, Juliette Leeb-du Toit, argues; “Initially Sebidi produced quasi-realistic work, her images located in her rural home and environs and marked by romantic/Modernist themes and ideas.” This statement trifles the complex reality of Sebidi’s work, which is culturally informed, and reflects a salient sagacity and respect toward the values that shaped her. Sebidi’s iconic style invigorates artistic discourse by playing on the complexities and philosophical representations of identity. On the one hand, her subject gravitates from deconstruction and the decolonisation of social and cultural structures, whilst the other nudges us toward critical interpretations of the precolonial era.

Personal observations bring to light bewildering variations in the culture. There is no such thing as rigid conformity — rules are made for man, not man for rules. Sebidi challenges accepted societal norms and brings into question the interpretation of art itself. Why is it that she cannot develop her own style and practice, distinct from others? “Until the observer’s cultural conditioning is re-conditioned by intimate touch with the society, he cannot hope to penetrate its meaning,” observed Jan Smuts.

Khehla Chepape Makgato is a Joburg-based independent artist and arts writer, contributing regularly to ART AFRICA, Ampersand Online and The Journalist online publications. He works at Assemblage Studios and is the founder of Samanthole Creative Projects & Workshop, a community-based art organisation focusing on arts and literacy youth programmes.