Toyin Ojih Odutola: A Countervailing Theory at the Barbican Centre

Manny Kanabe: The Curve lends itself very well to the exhibition ‘A Countervailing Theory’. Did space inspire the body of works?

Lotte Johnson: The exhibitions in The Curve at the Barbican are mostly site-specific commissions by contemporary artists – we invite an artist to visit the gallery and conceive a new installation in response to this context. The vast, unusual space often acts as a springboard for their ideas, but its influence always manifests in different ways. When she first visited the space, Toyin Ojih Odutola was immediately struck by its unravelling nature, incrementally revealing itself as you walk through the gallery. She had recently watched an episode of the television programme Civilisations in which the presenters demonstrated how to view a traditional Chinese handscroll, rolling it out in increments but never revealing the previous or succeeding scene. The Curve presented itself to her as a giant scroll upon which to elaborate a narrative; the space held the potential for a story, for a whole world to fill it. The vast proportions of the space, roughly 90 metres long with a 6-metre high ceiling, also seem apt for the epic nature of the ancient myth that Toyin crafts in ‘A Countervailing Theory’. I think this may have been serendipitous, but I also love how the vivid articulations of the rocky terrain of the Jos Plateau region in central Nigeria (the setting for the fictional prehistoric civilisation depicted in the show) are in dialogue with the textured concrete columns that punctuate the gallery’s architecture. 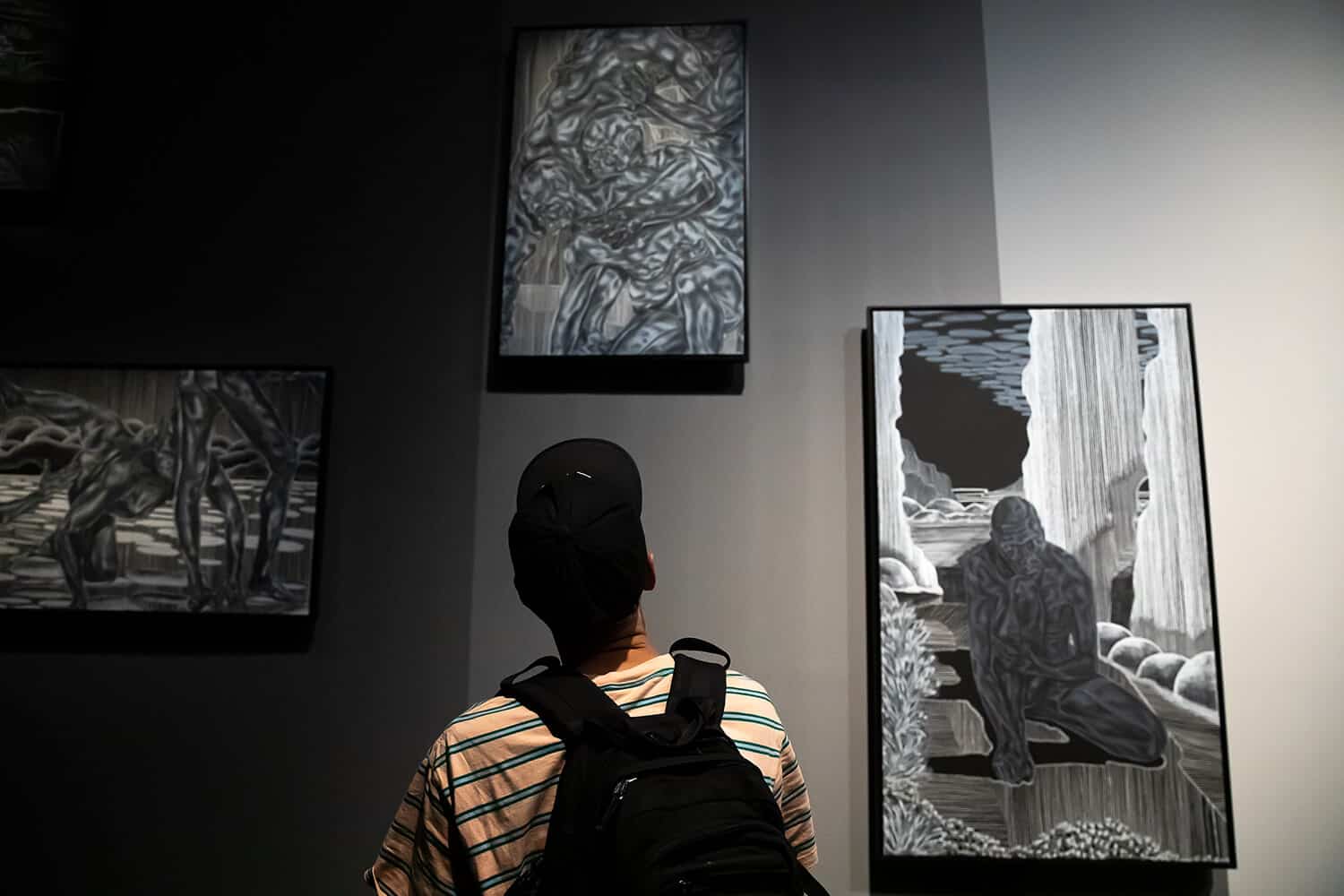 How was Toyin Ojih Odutola identified as the 33rd artist to exhibit at The Curve?

I first saw Toyin Ojih Odutola’s work in person in early 2018 at her exhibition ‘To Wander Determined’ at the Whitney Museum of American Art in New York. It was a striking installation of an incredibly powerful body of work that explored the tale of two aristocratic Nigerian families coming together through their sons’ marriage, set in a fictional world where colonialism hadn’t taken place. A text in the exhibition explained that the works on view were part of a collection of commissioned portraits; this letter was signed by Toyin herself posing as the families’ private secretary. The works presented reflective insights into the worlds of these characters, each depicted in opulent interiors or lush landscapes, and shown in moments of contemplation or rest, their gazes enigmatic. It is was very much up to the viewer to piece together the possible dynamics between the characters and the twists and turns of the story of the families’ union – Toyin’s work is immensely generous in the way that it actively invites interpretation. I was also struck by how she had crafted a very singular kind of speculative fiction through her work, conjuring a complete world within the gallery’s walls and in doing so questioning prescribed histories of sexuality, gender, race, class, and more, with great nuance. I was also blown away by her process. She only works with drawing materials, building up layer upon layer of mediums (which include pastel, charcoal and chalk) to achieve an extraordinary range of textural effects, from the soft weave of a scarf to the nuanced terrain of skin. It is difficult to describe the ‘surface’ of her works because they have such tactility and depth; they are landscapes in themselves.

I wondered whether the Curve might be of interest to Toyin given the linear, unfolding nature of the space – I thought that she might find it to be a compelling vessel for a new story, a stage for a new cast of characters.

It was these many rich aspects of Toyin’s practice that led to us commissioning her as the 33rd artist to exhibit in The Curve. After experiencing her Whitney show and the layered narrative that she had crafted, I wondered whether the Curve might be of interest to Toyin given the linear, unfolding nature of the space. I thought that she might find it to be a compelling vessel for a new story, a stage for a new cast of characters.

What were the main challenges you faced in the creation of this exhibition with Toyin Ojih Odutola?

The main challenge was the fact that very sadly Toyin was not able to join us in person for the installation of the exhibition due to the Covid-19 pandemic. We installed the show together over numerous Skype and FaceTime calls, emails, and video messages. Luckily we have been working together for a long time now, and we had meticulously planned the installation in advance, so everything went smoothly. However, it was certainly a new experience to install such an immersive exhibition without the artist herself present. Toyin was unbelievably patient with us as we worked virtually with her each day. I am so grateful to her for her trust, as well as her sense of humour throughout the process. I can’t wait to finally stand in the space with her at some point – it will be a very special moment.

How have the audiences and media responded to the exhibition so far?

It has been wonderful to see and hear the responses of visitors in the gallery as well as in the press and on social media. We have put in place various very careful measures to keep our audiences safe with regards to Covid-19. It is fantastic to see many people feeling comfortable visiting the Barbican to see the show. There is a great joy to be found in finally being able to experience such powerful artwork in the flesh after many months of staring at our own four walls during lockdown! Toyin invites visitors to immerse themselves in the world that she has crafted. The exhibition brings to life the transformative potential of the gesture of storytelling, inviting an audience to bring their own interpretations – it’s been really exciting to hear how people have responded to the work. ‘A Countervailing Theory’ presents an expansive narrative that delves into the act of mythmaking and explores dynamics of power, gender, oppression and imperialism with deep nuance. It seems that people have found resonance in the questions that the show prompts us to ask about how societies and systems are formed.

…due to the Covid-19 pandemic. We installed the show together over numerous Skype and FaceTime calls, emails, and video messages. 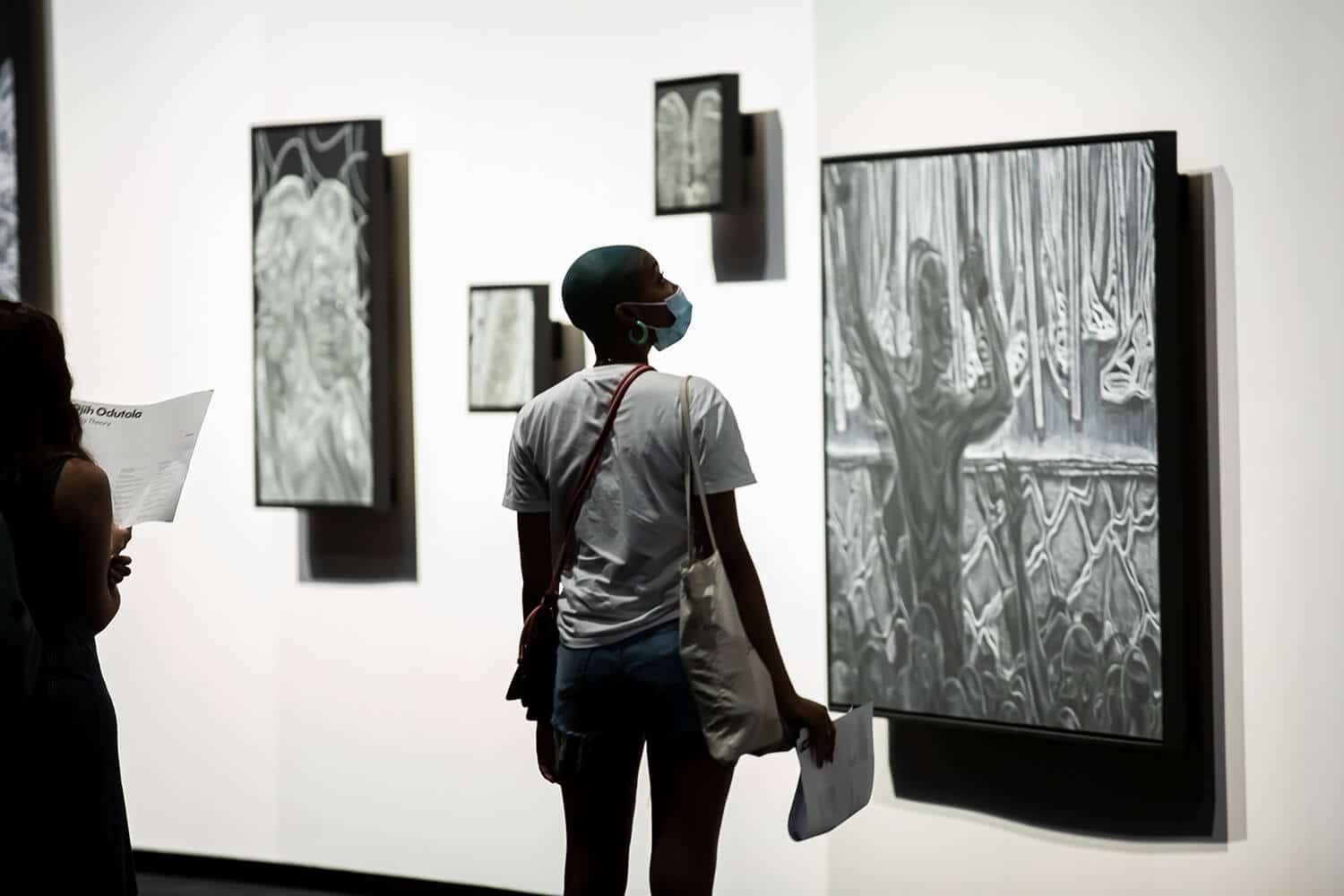 How would you say this exhibition is different to Toyin Ojih Odutola’s previous exhibitions?

This exhibition marks several exciting new directions in Toyin’s practice. Those who are familiar with her recent exhibitions such as ‘To Wander Determined’ (Whitney Museum of American Art, 2017-18) and ‘Scenes of Exchange’ (12th Manifesta Biennial, Palermo, 2018) will probably think of the rich, jewel-like pastel tones of her colour palette in these works. However, ‘A Countervailing Theory’ is executed in a solely monochrome palette – Toyin uses white mediums on a black ground, inverting the usual practice of drawing with black on white paper. She has restricted her palette, and in doing so, she has created a really expansive visual language and has achieved even more remarkable, experimental mark-making than ever. A ‘Countervailing Theory’ also marks the first time she has worked on gessoed linen canvases. Another new exploration is how she delves into prehistory. Most of her previous work has presented characters or worlds that seem that they could be articulating a parallel contemporary reality – however, ‘A Countervailing Theory’ presents a myth about an ancient civilisation.

Finally, the show is also the first time that Toyin has introduced sound into her practice and the first time that she has worked in collaboration with another artist. Toyin invited sound artist Peter Adjaye to create a soundscape to accompany her work, which has resulted in a wonderful multi-sensory, immersive experience.

What is your view of Toyin Ojih Odutola’s story-telling style of a picture book at her exhibitions?

Toyin draws on an incredibly diverse range of references in her work. One of her key sources for inspiration is the form of the graphic novel or comic book, as well as animated films, the influence of both of which you can see manifested in ‘A Countervailing Theory’. Each of the works in the Curve exhibition acts as an individual episode within an overarching narrative, almost like a storyboard or still from a film which encourages the viewer to piece together the fragments of the story for themselves. However, even within each single episode or work, there are multiple potential stories embedded.

What has been the impact of Toyin Ojih Odutola’s collaboration with Peter Adjaye to provide the sound to accompany the exhibition?

There is a really cinematic feel to ‘A Countervailing Theory’. The 40 works act like film stills, akin to a giant unravelling storyboard. Peter’s soundscape adds to this cinematic experience, creating a world of sound that interacts with and builds upon the world that Toyin has created in her work. Just as Toyin’s own work is richly layered with different sources that come together to produce a deliberately otherworldly effect, Peter’s soundscape features a hugely diverse range of sounds. From classical strings to synths, natural elements, including wind and water, and West African instruments. As you move through the gallery and the narrative unfolds across the gallery’s curved wall, the soundscape evolves and morphs with you – resulting in an immersive, sensorial journey.

Is this exhibition a one-off exhibition with Toyin Ojih Odutola or part of a series of other exhibitions in collaboration with the Barbican?

The artist commissions for the Barbican’s Curve gallery are standalone exhibitions, so we don’t have any plans for another exhibition with Ojih Odutola in the immediate future. However, we are hugely excited to see what she does next – we have no doubt it will be an incredibly rich, layered and transporting body of work.

‘Toyin Ojih Odutola: A Countervailing Theory’ is currently on exhibit in The Curve at the Barbican Centre, London, from 11th August until Sunday 24th January 2021. Ceremonies Within by Peter Adjae will be released on a limited-edition vinyl-only edition on Music for Architecture records in partnership with The Vinyl Factory, on 18th September 2020. The vinyl is also available in The Barbican shop.