in News Articles 2013
Share on facebook
Share on twitter
Share on email
Share on whatsapp
“… the slave who is not able to take change of his own revolt deserves no pity for his lot.” – Tracey Rose
From the 4 – 7 May 2016, the Stadtkuratorin Hamburg held the ‘What Time Is It on the Clock of the World*’ festival and symposium that brought together artists, musicians and performers as well as international theoreticians and activists to discuss questions around racism and sexism “in relation to the (in)visibility of current migration, stereotyped gender roles and material reproduction conditions.”
The festival was conceived by Sophie Goltz (Artistic Director Stadtkuratorin Hamburg) in collaboration with Hengameh Yaghoobifarah (journalist, editor, Berlin) and the title comes from an expression of the U.S. human rights activist, philosopher, and feminist Grace Lee Boggs (1915-2015), who campaigned for social change, for the workers movement, and for the rights of the Afro-American population. In her 1974 book ‘Revolution and Evolution in the Twentieth Century,’ Boggs shows how conditions change and that if progressive ideas don’t change to keep up, they become limitations to human and social development.
To give context to this necessary festival and symposium, we’ve chosen to highlight the work of the only artist from the African continent in attendance, Tracey Rose. Rose took an original and challenging puppet show to Hamburg, titled …don’t shoot the messenger!” Mnemosyne defends Mercury (45 min), performed in both German and English. The script for the show is published below, alongside images from the live performance. 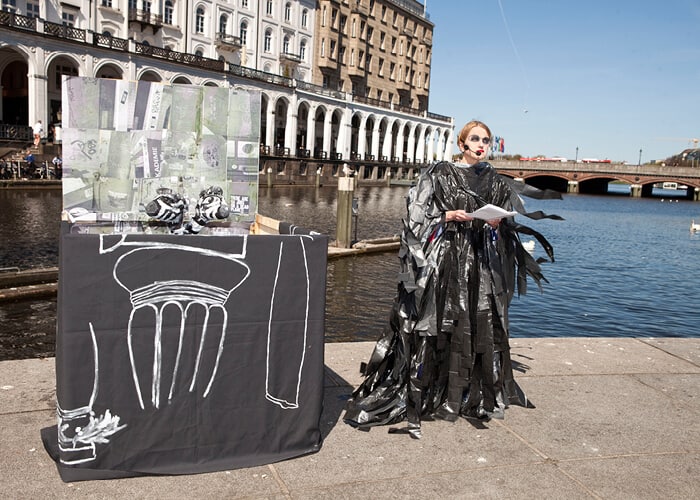 Actually, national duties, social duties and humanitarian duties are obligatory only to those

who are bereft of spiritual duties. As soon as a man takes his birth on this dart, not only

does he have national, social and humanitarian obligations, but he also has obligations to

the demigods who supply air, light, water, etc. He also has obligations to the great sages

who have left behind them vast treasure-houses of knowledge to guide him through life. He

has obligations to all kinds of living beings, to his foremothers and forefathers, family

members and so forth and so on. But as soon as one engages himself in the one single

obligations without having to make separate efforts. 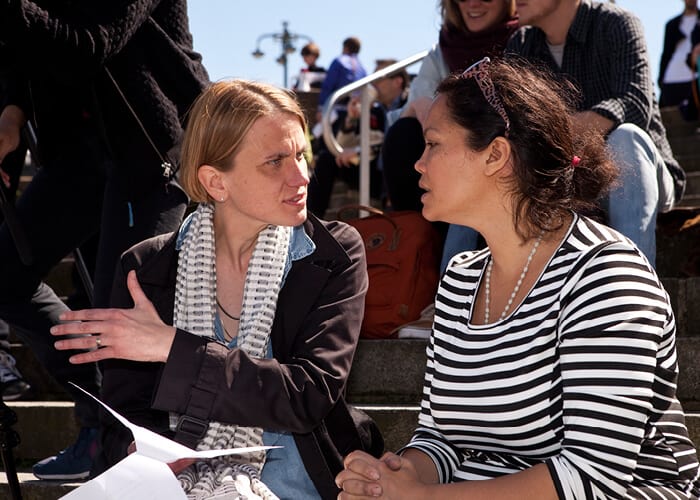 Tracey Rose (right) and Sophie Goltz, 2016. What Time Is It on the Clock of the World*, Stadtkuratorin Hamburg, Photo: Frank Egel

B: Hello…hello everybody – my name is Professor Con.

A: Hello, hello and I am Professor Spiritsee.

It is a lovely day in Hamburg today. We prepared and prayed for sunshine and rain; the

aura, the tears of the gods.

B: You know I have been thinking …

I am right, therefore I am correct – you, on the otherhand

are left, therefore you are not right, you are incorrect.

YOU ARE NOT RIGHT YOU ARE INCORRECT! 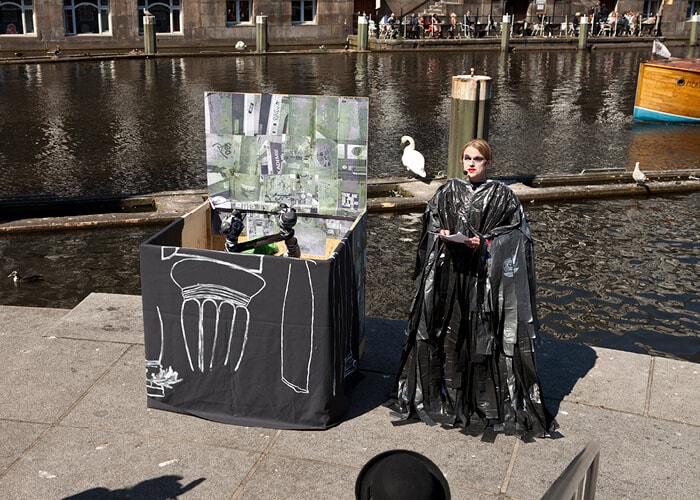 A: Argh! You sound like a quirky Nazi. A silly fascist.

Right and Left and incorrect.

A: Correct! You are RIGHT – with no heart!

The heart resides on the left side which is why you my dear friend are heartless, and ! !

without sense, in your mundane [over] simplicity!

A: Now, if you had a heart or we were neither or either or… we could share it and be

Like Prince or Bowie we could access it, transform it, work with it – re-present it, recreate it,

be gentler in form.

You would feel less empty?

It would be like a Bowie concert in Berlin west.

You and me / You and I would be riotous together if we shared the power, you give up some

We would be a match made in the heavens.

What do you say to that?

You have to answer quickly, as we have no longer any time left …

did you see that?

Are you still with me?

B: I am always with you.

I find it quite pleasant to pass from one atmosphere to another through crossing a border.

We need to put an end to the idea of a border that defends and prevents. Borders must be

permeable; they must not be weapons against migration or immigration.

Relation and difference link entities that need each other’s energy to exist in beauty and !! 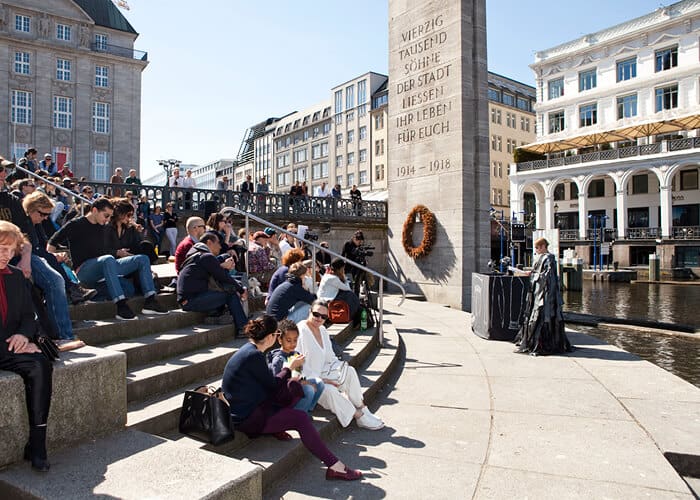 B: People talk of the Marshall Plan, which rebuilt the economy of Europe. But they don’t ! !

mention the African Plan, which enabled Hitler’s hordes at a time when their economies !!

were under siege, their stability threatened.

Who saved Europe? It was Africa.

There is very little talk about that. There is so little talk that we can’t become accomplices

of this ungrateful silence.

Africa. Those who want to exploit Africa are the same ones as those who exploit Europe.

We have a common enemy.

We can’t accept their morals.

We can’t accept their taking to us about dignity.

confidence in those who don’t pay. On the contrary, we must explain that it’s normal these

days to favour the view that the richest people are the biggest thieves.

A poor man who steals commits no more than larceny, a petty crime, just to survive, out of

necessity. The rich are the ones who rob the tax revenue and customs duties. They are the

ones who exploit the people.

A: … the slave who is not able to take change of his own revolt deserves no pity for his lot.

Freedom should not only be won through struggle, and we call on all our sisters of all races

to go on the offensive and conquer for their rights!