Treasures of Islam in Africa – From Timbuktu to Zanzibar

The Arab World Institute presents an exhibition from April 14 until July 30, 2017 dedicated to the close links, past and present, forged between the Arab-Muslim world and sub-Saharan Africa. ‘Treasures of Islam in Africa’ explores the processes by which Islam was appropriated and transmitted by African peoples. Covering Morocco, Senegal, Ethiopia, Kenya, Mali, and other nations, the exhibition traces thirteen centuries of history through art, architecture, and rituals attested in more than 300 traditional and contemporary works, loaned from collections that are rarely exhibited in public. 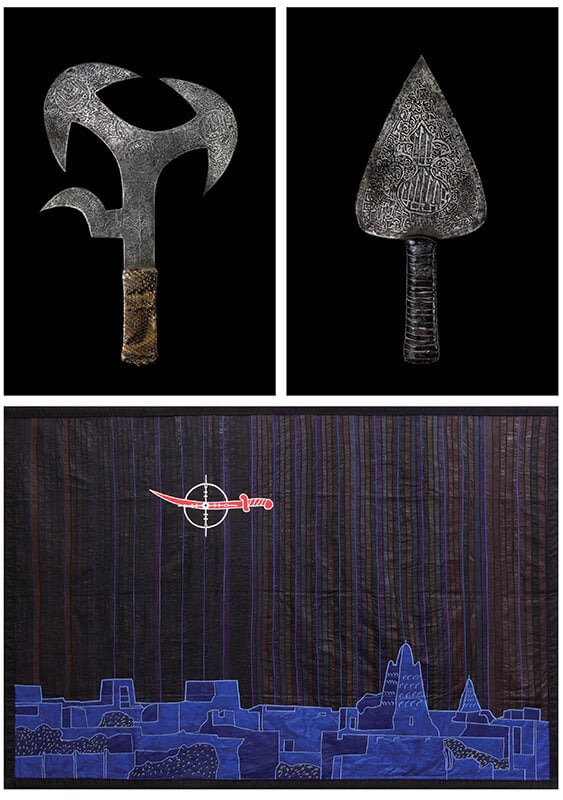 Mathilde Lepert: With the growing success of far right political parties in France and Europe, what is the significance of the exhibition ‘Treasures of Islam in Africa’ at the Arab World Institute and, more generally, all the events in Paris focused on Africa this year?

Nala Aloudat and Hanna Boghanim: It was important for us to deal with preconceived ideas of Islam in sub-Saharan Africa that are still spread in society today. Our role as curators is first of all, pedagogical. We explain that for centuries Islam was transmitted while tolerating ancestral beliefs and traditions. This is evident in the exhibition, for instance in the display of masks used in Muslim ceremonies that testify to a synthesis with pre-Islamic traditions. Furthermore, the whole exhibition attests to the plurality of religious practices in Islam. Some videos of Sufi ceremonials have nothing in common with stereotypes conveyed today. Indeed the exhibition allows visitors to distinguish Islam and radicalism. Nevertheless, considering the other exhibitions in Paris, the aim wasn’t to respond to the growing importance of the far right party in France. These exhibitions simply reflect an increase of interest in the African contemporary art scene.

Do you think that ‘Treasures of Islam in Africa’ can have a significant impact on people’s beliefs and bias about Islam and migration?

Of course we hope that visitors will change their view on Islam. The fears expressed today have mostly resulted from a misunderstanding of Islamic cultures and the plurality of these practices. This plurality is at stake today with the rise of certain radical movements. All sides of this religion should be shown in order to make it less foreign.

It is also important for the French to understand that the situation in some African countries can make people flee. This message is transmitted through powerful artworks that promote the richness, but also the fragility of the material and immaterial patrimony of the African Muslim cultures.

You mentioned Timbuktu and Zanzibar in the title of the exhibition. Why are these cities relevant in the context of the appropriation and transmission of Islam by African people?

It was important for us to make the visitors understand that the geographic regions concerned in this exhibition spread out from West Africa to the Swahili coast, encompassing the African Horn and the Nile upper valley. These two cities also resonate greatly in the public mind. We especially wanted to give Timbuktu a special place, in dedicating a large space to the manuscripts of the Mamma Haidara library, in order to give a tribute to the commitment of the men and women there, since the jihadists destruction in 2012. A video shows how some of the manuscripts have been saved thanks to the library commitment. We also learn that only 5% of all the manuscripts have been studied as we speak. They are today an object of a big restoration campaign.

Regarding Zanzibar, we show many objects from the city, among them a wooden door and silver filigree jewelry. Zanzibar has played a great role in the international trade especially after 1840 when the Oman sultanate transferred its capital city to the island. Therefore the city was a platform for trade exchanges in the Indian Ocean. That’s why we can observe Arabic as well as Indian influences of the Zanzibar objects in the exhibition.

Ancient and contemporary arts are in constant dialogue throughout the exhibition. Why was this dialogue so important to you?

When we conceived the journey throughout the exhibition, it soon became necessary to give a contemporary dimension to a subject that was meant to tell the story of the Islam diffusion in sub-Saharan Africa since the 8th century. All the choices we made of the contemporary artworks were carefully thought through and can deal with contemporary issues. When we evoke the jihads that first appeared in the 18th and 19th century, it was necessary to ask contemporary artists like Aboubacar Traoré or Abdoulaye Konaté to exhibit at the Arab World Institute to denounce the jihads. Sometimes, we chose to create a formal dialogue between contemporary and traditional art. Hence, Omar Victor Diop or Aïda Muluneh’s photographs resonate with a Peul blanket from the Quai Branly Museum and Harar wicker-work.

Furthermore, when we evoke the Tijaniyya brotherhood, we chose to illustrate this subject in showing artworks from three contemporary artists. For instance, Rachid Koraïchi and Babacar Diouf both work with the repetition of signs, symbolising the mystical knowledge. They therefore make the link with the presentation of a Koranic plate earlier in the exhibition.

Translated from French by Mathilde Lepert.

Interview with the artist MAÏMOUNA GUERRESI (The cover star of ARAFRASIA, issue 08)

Mathilde Lepert: You were born in Italy but have lived in Senegal for a long time. Does your work reflect your dual citizenship?

Maïmouna Guerresi: My art is the expression of my dual Italian and Senegalese identity. I would like to call it a métissage, a hybrid identity where Western and African cultures are intertwined through Islamic spirituality. It is precisely this mixture that my artistic and spiritual works embody. In addition, the word métissage relates to tissage meaning weaving, building something. It is not only the result of a dedicated and careful work of manual labor but also, to me, the spiritual and inner project of continuously looking for knowledge through Islam. It is expressed in my works with the usage of symbols, signs and figures.

I’ve read that your work aims at delivering a universal truth about community and the soul. How do you achieve this goal through the representation of Islamic spirituality?

The figurative references I use to represent Islamic spirituality are inspired by Islamic miniatures, Islamic African art (in particular when Saints are represented together with Arabic calligraphy) and European classic iconography (with diptychs and poliptychs).

In my photographs, the poses of the characters, their costumes, and the backgrounds that I build, could be seen as many references to the traditional Madonnas or Saints of the late Gothic and Renaissance period. However, the somatic features of my characters belong to Eastern oriental and mostly African faces.

I stage the image of a tolerant and ecumenical Islam, a reading that mentions the common origins of the three great monotheistic religions, aimed at seeking the knowledge of the divine (which is also in ourselves).

I have created a universe where I explore my recurring themes: metamorphosis, mystical contact, elevation, infinity.

In the photographic works of the ‘Giants,’ the optical effect of the obscure and infinite void I have created in the mantles worn by my characters do not represent emptiness, but rather the fullness of a quantum vibrational situation, out of space, out of time, out of materiality.

Likewise, in more recent works titled, ‘Trampolin,’ I am searching for a possible balance in the void.

For me, starting new work is like repeating a ritual, a prayer a Dhikr, where “spiritual thought prevails over materiality,” a concept belonging to religious mysticism and Sufi thought, that quantum science finally shares.

How do you feel about the recrudescence of Islamic radicalism? Does your work also deal with this issue?

Even though it is full of spirituality and mysticism, my work is not far from the problems of our time, from daily tragedies the news bluntly summarises in numbers and statistics.

My art is also a denunciation of the preconceptions and fears created by ignorance which has led to tremendous radicalism. It also condemns the habit of dividing and cataloguing people.

I have done several works, such as the ‘Look for the future’ where the blindfolded characters, wearing long dresses, walk on rocky terrain as if they were playing ‘fly-blind.’

They are looking for themselves in a metaphor that alludes to the difficulty of understanding, but also the desire to meet each other.

Another work that addresses these issues is ‘Taliby,’ a photographic triptych. Two blindfolded characters, each holding a lectern in hand, are represented in the side panels as tall columns. The central panel displays an installation of stacked gasoline cans. Here, several issues come to mind, such as the exploitation of raw materials and oil in Africa and red, the dominant colour in the photograph, sums up all the violence.

But the eternal waiting and suspension, along with the balance of the forms contribute to that alchemy process that is the search for beauty and poetry, keeping the viewer’s attention on current issues.

In the exhibition ‘Treasures of Islam in Africa’ at the Arab World Institute, your work resonates with ancient artworks and objects. Why do you think this dialogue is relevant to your art and to the understanding of Islam in Africa?

‘Minarets Hats’ are the works I am presenting in the exhibition ‘Treasures of Islam in Africa’ at the Arab World Institute. In these works, I focus on the highest part of the body exposed to the ‘elements of life’, the Head.

They are covered and crowned with a series of hat-shaped minarets, which I handmade ritually, in the traditional way of the Sufi Baye Fall in Senegal, which entails collecting ninety-nine pieces of fabric (for the ninety-nine names of Allah in Holy Koran) and then sewing them together to produce their clothes.

Inspired by the high hats of Dogon masks, I built masks, hats, ornaments, armours, like high antennas enabling connection with the sky.

The high, architectural shapes of minarets became the ideal solution to build these headdresses, and create a high and narrow photographic format. This emulates the syncretism that is very strong in Africa, where traditions, costumes, rituals, shapes and symbols are totally integrated with religion.

Mathilde Lepert: Your photography series INCHALLAH deals with the Malian civil war and the indoctrination perpetrated by the Salafists in Mali. Why was it important for you to deal specifically with this subject?

Aboubacar Traoré: It was very important to me to deal with the subject of religious obscurantism. Even before the northern Malian occupancy by the Salafists, it was a very important subject for me. But the occupation definitely gave me lots of courage and ideas to create.

Your photographs can be easily recognised because the characters all wear a black painted calabash. Why did you choose this object and is it of particular significance to you?

I chose black to represent obscurantist ideas which are black ideas that enter the brain. And I chose the calabash because I think the shape of this object is very aesthetic but the grains inside are very bitter.

Your work for the Bamako Encounters 2015 can be seen as controversial. Is it important for you to be controversial?

During the Bamako Encounters in 2015, the organisers were afraid of my series. First, my photo was selected for the main poster and the catalogue cover of the event. But then lots of controversies arose and they chose another photo at the last minute. My series scared and shocked Muslims, especially those from Mali, where 95% of the population is Muslim. This country is very fragile since the civil war in the north.

I think this dialogue is relevant to my art and to the understanding of Islam in Africa, simply because the ideas behind the artworks are the same.