The message conveyed without actually being portrayed. Cameron Platter, who grew up around linocut prints by John Maufengejo, refreshes the political turmoil of South Africa’s past and, satirically, confirms that life is very interesting in contemporary South Africa. 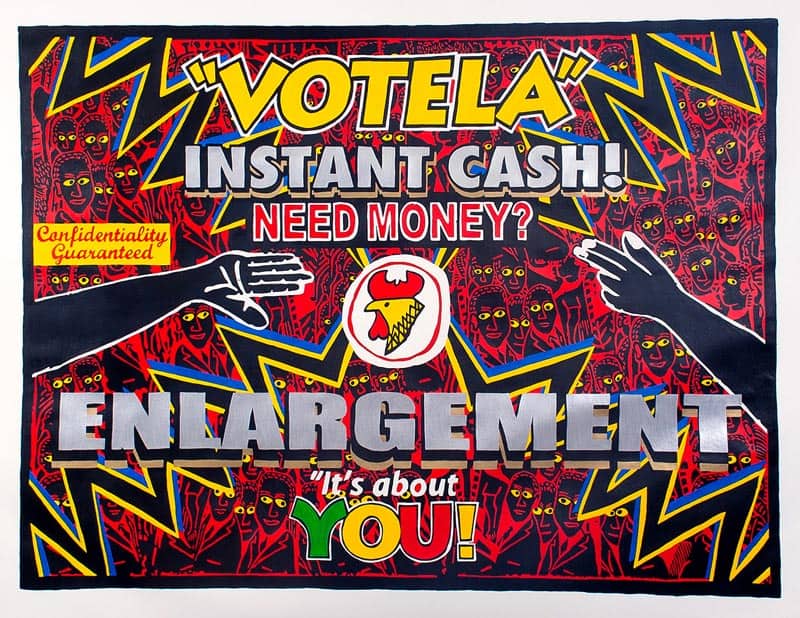 Cameron Platter, It’s About You, 2011. Courtesy of the artist.

As if constructing a vivid, truthful dream, Platter draws from outsiders in all fields to mesh together an accurate portrayal of the nation. Worlds in which Zulu warriors are replaced by figures in a Durban nightclub, medical aid schemes are substituted for abortion flyers, and love comes in the shape of hung she-male African powerhouses. The beautiful thing is that the larger theoretical framework of his imagery and sculpture could so seamlessly become part of the system of a South African city like Johannesburg.

Kyle Tregurtha | Cameron what are some of the goals of the anthropomorphised animals in your drawings?

Cameron Platter | To hold up a mirror. To reflect the good and the bad. Of late, I haven’t been using animals as conduits. Reality is far weirder than any fantasy, and has become my medium ofchoice.

KT | VOTELA (It’s About You) comes off as a sardonic bricolage of the mores of current South Africa: You’ve won the vote, now use it to get a larger bank balance and boner, instantly, it’s all about YOU. Is this a B.E.E joke?

CP | It isn’t a joke. It’s deadly serious, crude, protest art. It’s about us not looking at ourselves, becoming zombies, slaves to instant everything. I like my works to be able to read on varying levels, so that different people can read something unique from them.

KT | Slaves to instant everything. Is this something new to the South African experience in particular? The affect you’re talking about seems to have different implications there, as apposed to in the USA.

CP | I think the unregulated conditions of accessibility are the difference. It would appear that in the US there are some limits to how far people can shove shit in your face. But, if you like shit in your face, you can get it anywhere/ anytime. That’s the beauty of the US. But in South Africa, it seems more wild west, moreunsupervised. Everyone’s selling something. Instant. With Eternal Happiness Guaranteed. 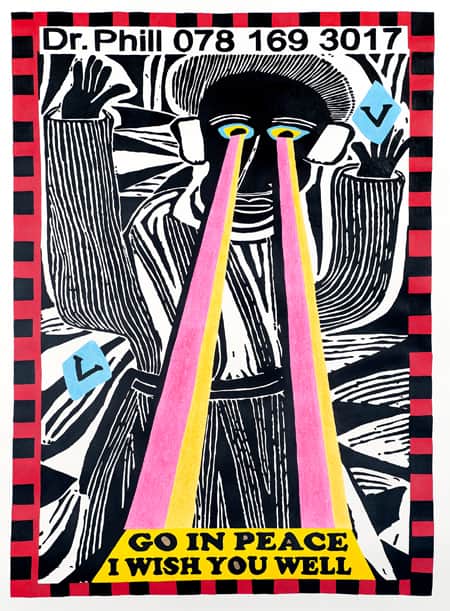 KT | Where do you synthesise your colorful, but dark thoughts from?

CP | My thoughts/ ideas/ concepts/ strategies (whatever you want to call them) are collaged from personal experience, as well as watching, hearing, listening to things around me, which affect me deeply. Although a lot of my work is based on direct experience, and emotional reactions to those experiences, I don’t like to give viewers a direct channel to myself. I’m saying “look at this!” rather than “look at me!”

KT | You’ve said that an artist who claims they know where they’re going is lying. How do you navigate this idea with ‘The Apocalypse Project’, your projected ten year project on South Africa?

CP | I think it’s important to have a sketch of where you’re going. (And I need some structure around me, in order to work.) Ten years leaves a lot of room for the project to mutate into whatever form becomes most suitable. It is important, I think, to leave room for works (or projects) to evolve naturally. The best ways forward are always from mistakes. Coincidentally, the works I dislike the most immediately after making, are invariably the works I grow to love the most in the long run. Same goes with looking at other peoples’ work. 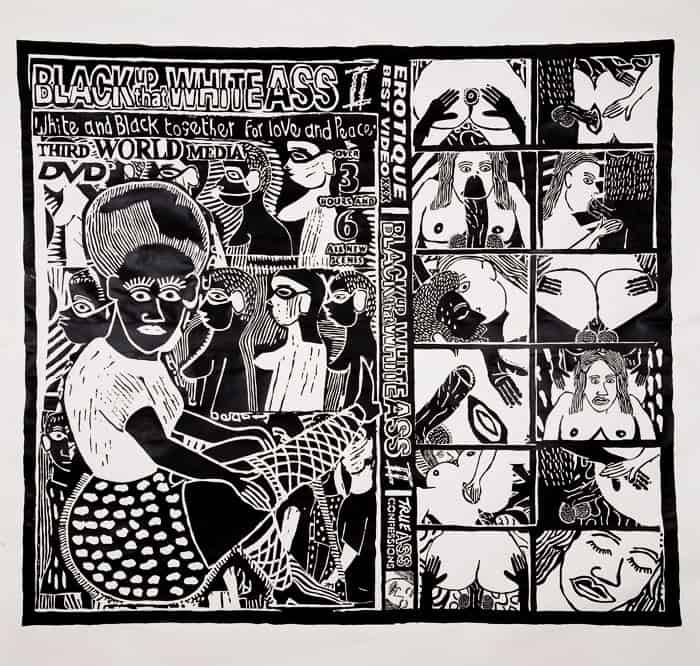 Cameron Platter, Black Up That White Ass II, 2009. Courtesy of the artist.

KT | Have you seen Shopgirl? In it Claire Danes proudly reveals herself as an artist. When pressed she reluctantly says ‘ I draw’. When I was at school, drawing wasn’t considered art. Did you have a similar experience and how do you vindicate that today?CP | I remember, as a child, taking weeks to complete a single drawing. Everything I do now is about chasing that high, that all-or-nothing involvement in a work. But in art school, although we were trained in figure and still-life drawing (nice) when we first arrived, once I reached the final years, we were discouraged toproduce anything that involved drawing, colour, representation, etc… Instead we were corralled into making atrocious conceptual art. (I did, I think, rise above this slightly, by attempting to train a parrot topaint watercolours…) After getting through undergraduate, I found it quite liberating, and perversely avant-garde to work in the old-school medium of drawing.

KT | I’m under the impression that you find it hard to sell your work even though it’s very well received; MoMA is nothing to scoff at. Would you ever consider doing a pop-up at an African crafts and carvings market? Basically I need one of your carved chairs in my factory IMMEDIATELY.

CP | Difficulty in selling your work should mean you’re doing something right. Right?

KT | Huh! I’m laughing. I don’t know. I make and sell velskoen for a living so the easier it is for people to make the leap and purchase them, the more I feel we’re doing right. As an artist you may be onto something – van Gogh springs to mind. So you’re not affected by sales?CP | It isn’t all about the money…

KT | In your head, how do you practice explaining your work to your offspring when those inquisitive minds start asking Daddy why?

CP | She already asks, and I answer all her questions as honestly as possible. I would imagine growing up today is far more shocking and jarring than anything in my work.

KT | Are the broad spectrum (read lower class’s) habits and devious ways you capture different from the duplicitous addictions and bent of the wealthy?

CP | I think everyone is equally corrupt. 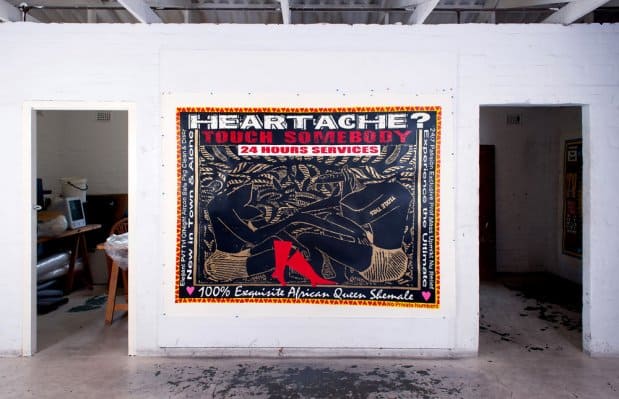 Cameron Platter, Touch Somebody, 2011. Courtesy of the artist.

KT | ‘La Mirage’ and ‘Heartache’ (I ❤ Durban and Touch Somebody) are two pieces which recall Las Vegas. The instant comfort one can so easily find in a space like that. Fuck the pain away vibes. Is there a place in Africa that resounds in the way those two drawings do? Do you ever immerse yourself in the type of locales found in your work?

CP | La Mirage is a real nightclub/ brothel in Durban. The piece “Heartache” is made up of escort classifieds from a daily Durban newspaper. So those two works should echo, locally, Durban.

But they should also stand for a global archetype. I always immersemyself in local locales. Speaking of fucking the pain away, I saw Peaches in Miami, and it was an enlightening experience.

KT | Do you have an account with Staedtler or whoever makes the coloured pencils you use? You must go through so much tonnage.

CP | Faber-Castell. No. I don’t have an account. They don’t seem interested, despite me having contacted them numerous times. But this might be due to the company being run by a Count Anton Wolfgang von Faber-Castell (8th generation.) Sounds like an asshole with a castle. 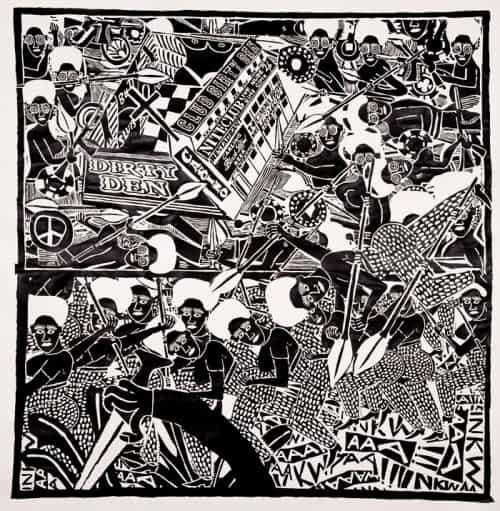 KT | Understanding how we rationalise the experience of altered states of consciousness is key to understandingour creativity. Is this important to you? If it is, would you be so kind as to explain how that principle functions in the world of your drawings?

CP | I don’t think there’s anything such as creativity. I’m interested in altered states. But, I think, reality (and sober reality) is far more disturbed than any altered state can conjure up or allow us access to. In effect, an altered state is governed by an individual’s subconscious mind, whereas reality is governed not byoneself, but by every other crazy schizophrenic walking around. Reality is far more dangerous, uncertain, and fluid. And interesting.

KT | How would you imagine the flip side of your disturbed utopias? I suppose they might really be utopias you’re drawing because everyone can get what they want, at a good price, right away, or for free, with a donkey dick to take home. Would the pure version be just as colorful, but boring?CP | Completely black. With an occasional strobe of light illuminating a golden beach, crystal clear ocean, rainbows, waterfalls, ecstasy, rare steak, rivers of wine, KFC, virgins, gold lamé, dolphins, Kendra, etc, etc. 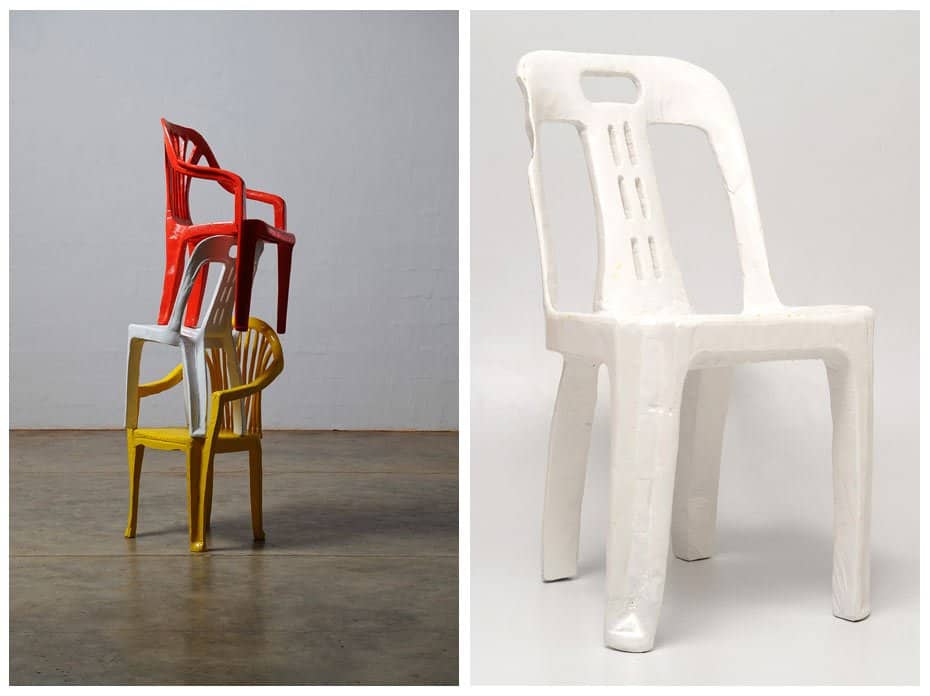 KT | I walk past the prison market on my way to the hardware store regularly and always want to commission a large bust of Grace Jones wearing black Margiela glasses with a green afro pick in her hair, also for my factory. Why do you think you started producing the carvedpieces, like the chairs, and these local artists haven’t? In this way you drastically broaden the everyday brush strokes of growing up in South Africa. But all I see at these markets are soap stone Warthogs and Wildebeest. It’s the people in these markets that go home to thelocation and call the numbers on the flyers you reference, which marks a great divide between their experience of Africa and the way you put it down on paper. Are you an interloper?

CP | Soapstone warthogs are the boss. I think artists are as always outsiders, nomads, interlopers. I started to reference the “doctors flyers” as they purported to engage and relate to a wide South African audience. (“All Blacks, Whites, Coloured, IndiansWelcome.”) The fact that most of the “doctors” aren’t from SA (interlopers) interests me too. But, I’m not trying to document anyone else’s experience, or point of view other than my own. And, to answer your question about why I started producing objects like the carved chair, I’m interested in waste, excess, detritus and trash. Ubiquitous things (objects, histories, people) that are overlooked, forgotten, and blend into their surroundings. These (replica) carved objects reference their “real” sources which all have history and stories. And, more often than not, they are universal objects that can be understood across cultures.

KT | Your portrayals of South Africa knock the perceived norms of the continent way out of the ball park, tearing open the playing field of what the West thinks is possible here, straddling the lines between human and capitalistic desires. What is the African dream? And where do you think South Africa is headed?

CP | I have absolutely no idea where SA is headed. Sideways, maybe?

KT | You’ve just returned from Miami, where you spent a month. What were you doing there? Anything fit for your work?

Cameron Platter (b. Johannesburg, 1978) an artist living and working in KwaZulu Natal, graduated with a BFA in painting from the Michaelis School of Fine Art, Cape Town, in 2001. He makes stories, pictures, and objects that are documents of contemporary morality; exploring a reality stranger than fiction, through fantasy, satire and subculture, using themes appropriated from the universal concerns of sex, love, violence, beauty, advertising, food, battle scenes, pornography, writing, politics, religion, crime, dancing, lust, greed, things falling apart, and spaceships. Platter fills the ordinary and marginal, with incendiary new meaning. Working from everyday experience with subjects overlooked or considered delinquent, sordid and

lowbrow, he reconnoiters notions and concepts on the outside fringes of South Africa’s popular culture. Recent exhibitions include “Impressions from South Africa, 1965 to Now,” Museum of Modern Art, New York;”Rencontres Internationales,” The Centre Georges Pomidou, Paris and Haus

Paris. In May 2013, Whatiftheworld will make its debut appearance atFrieze New York international contemporary art with a solo presentation of new work by Cameron Platter.