in News Articles 2013
Share on facebook
Share on twitter
Share on email
Share on whatsapp
There is something distinctly apocalyptic about Ndikhumbule Ngqinambi’s work, brought together in a vivid exhibition, titled ‘True Colours’ (2014), at Barnard Gallery.
Somewhere beyond the frame, between charred landscapes and brooding skies, a battle is being waged – a battle towards which thousands upon thousands of multi-coloured soldiers are marching to their doom.
His work reads almost like a novel, in which the flag is a pivotal character, a key protagonist in a dramatic narrative of scandal and tarnished aspirations. Usually representative of hope and honour, the flag in Ngqinambi’s work becomes a contaminated emblem, a loaded symbol of corruption and kleptocracy.  The current South African flag, in particular, came to symbolise a new dawn, a new era; its design indicating a coming together of different groups for change, for revolution. 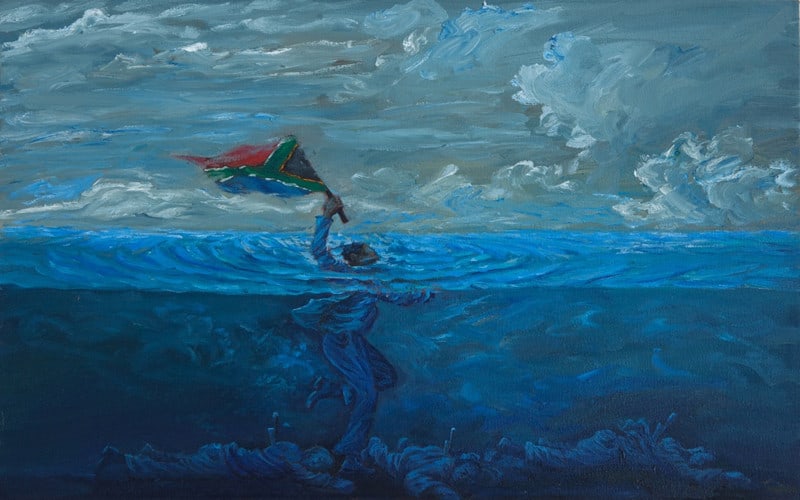 Ndikhumbule Ngqinambi, Beneath the Surface, 2014. 900 x 600 mm, Oil on Canvas.
Industrial Domination (2014) depicts an immense marching crowd, swathed in the vibrant shades of red, blue, black, gold, and green. They march towards an indeterminate destination beneath an impending Chinese flag that threatens to engulf them. The meticulous and repetitive detail applied to the row upon row of the faceless marching and the broad gestural strokes in the precipitous sky combine to create an image that is, itself, wrought with paradox. Between precision and painterly expression, between a country envisioned and a country realised; Ngqinambi’s work pitches and yaws like a ship at sea through a reimagined history, exquisitely rendered in thick, vivid colour. 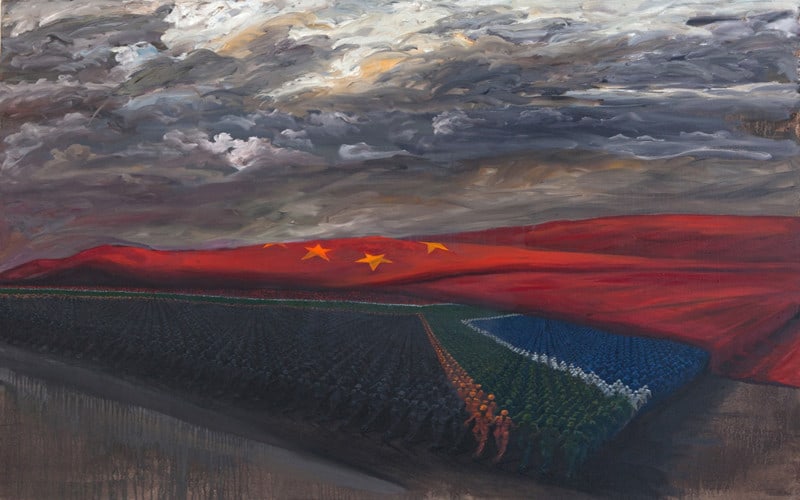 Ndikhumbule Ngqinambi, Industrial Domination, 2014. 2000 x 1500 mm, Oil on Canvas.
It’s not surprising to see how many red dots already occupy the space next to the titles, prior to opening night. Ngqinambi successfully makes political comment without propaganda, and conjures spectacle without being histrionic.
See Ngqinambi’s work for yourself, at the Barnard Gallery Cape Town, from 22 May – 10 July 2014.
By Fay Jackson