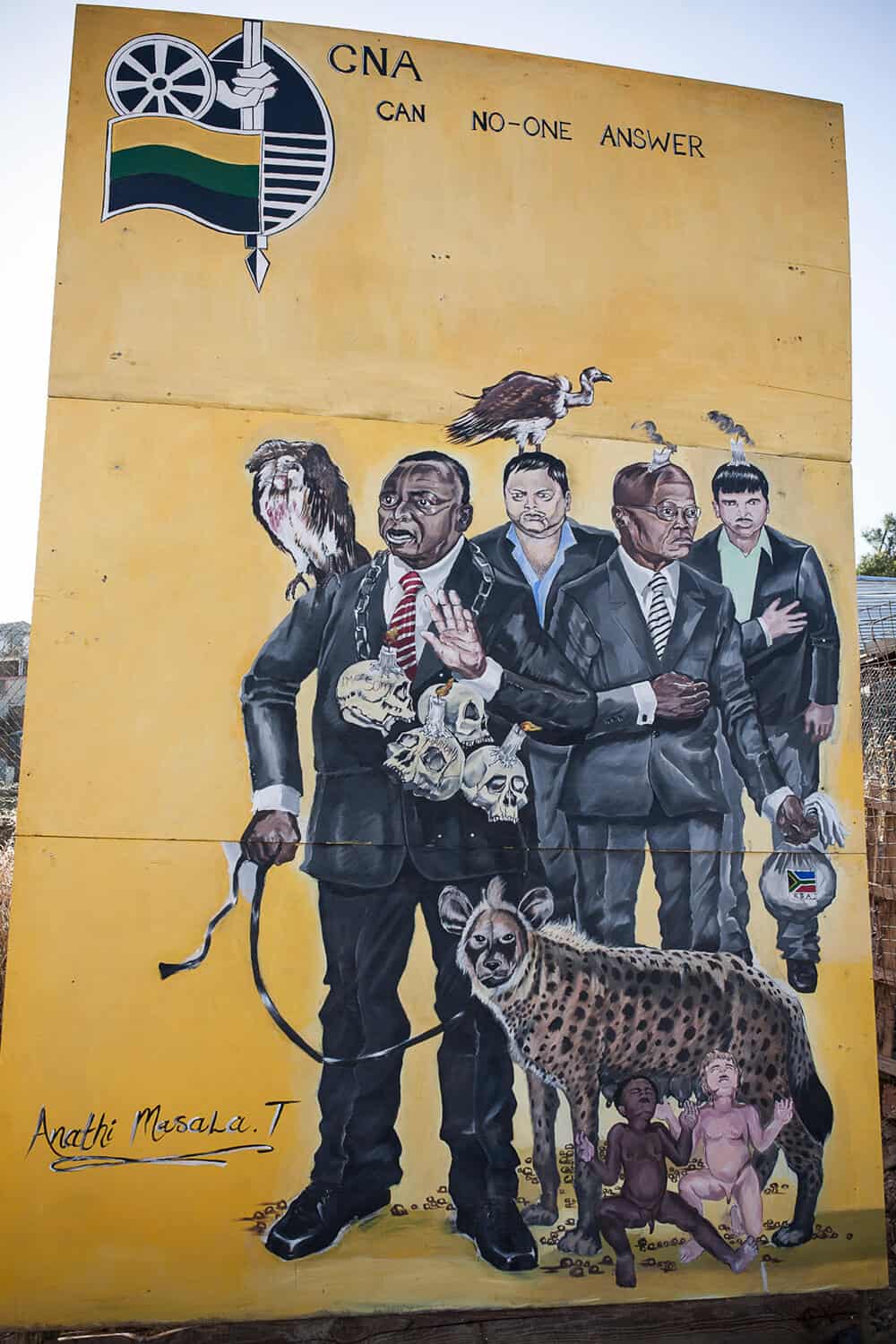 The highly controversial artwork depicting Jacob Zuma and Cyril Ramaphosa by artist Anathi Masala was defaced by angry residents in the Kayamandi township, Stellenbosch shortly after its reveal in the area in December. According to Masala, the intention of the artwork was to enlighten people with the painting, but “people see what they want to see in the image, they don’t understand that the artwork is there to create debate, which is my job as an artist – I am not a politician, I am just asking people to think, I am not choosing sides. That is my job as an artist.” 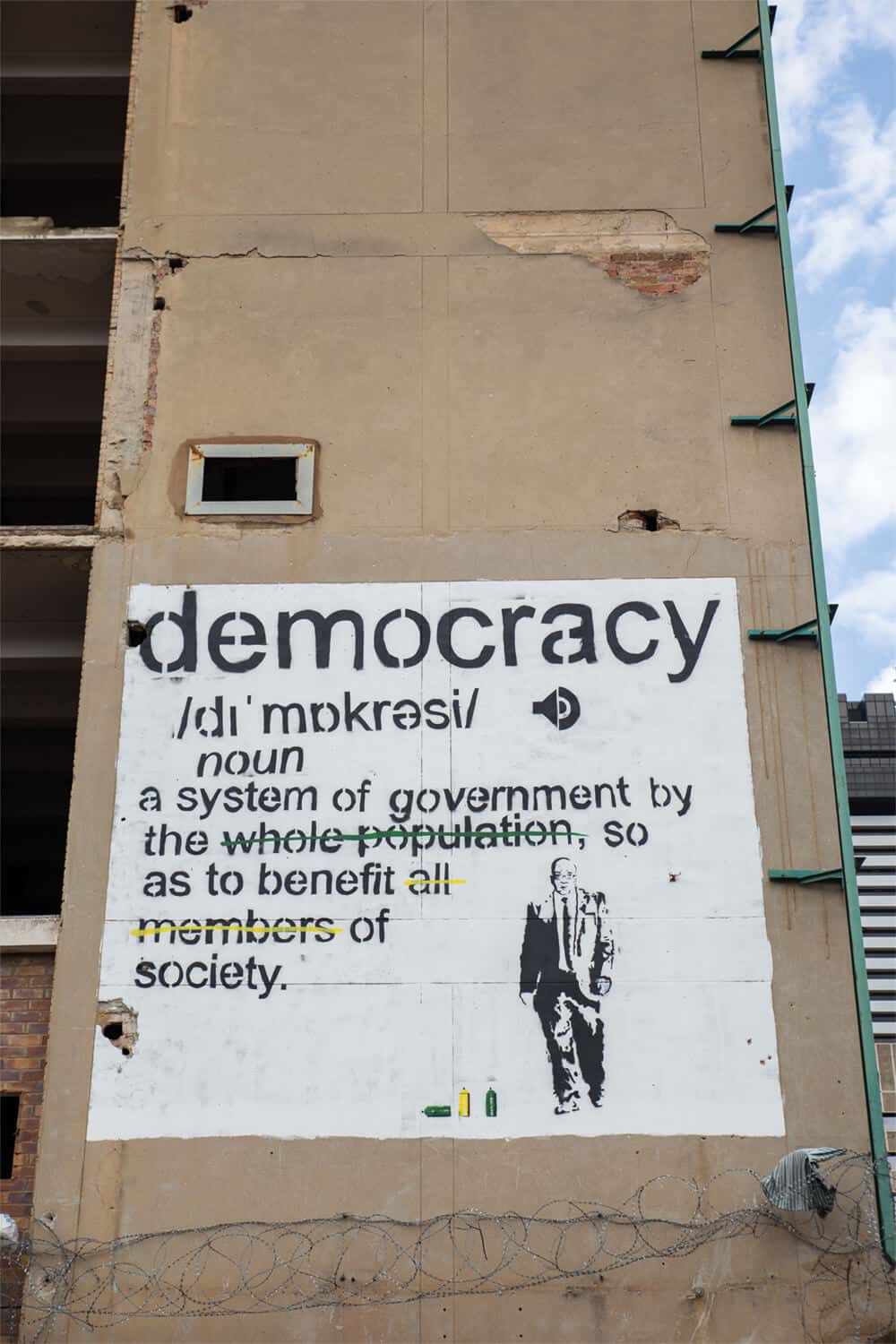 Architecture student Selwyn Steyn was awarded a fifteen thousand rand grant for his submission that now lives on the corner of Lilian Ngoyi and Francis Baard Street opposite the SARS regional office in Pretoria. According to Steyn, the artwork has not failed to raise eyebrows and spark debate amongst local tax payers arriving at SARS, highlighting the relevance and power of location as part of the street art narrative. 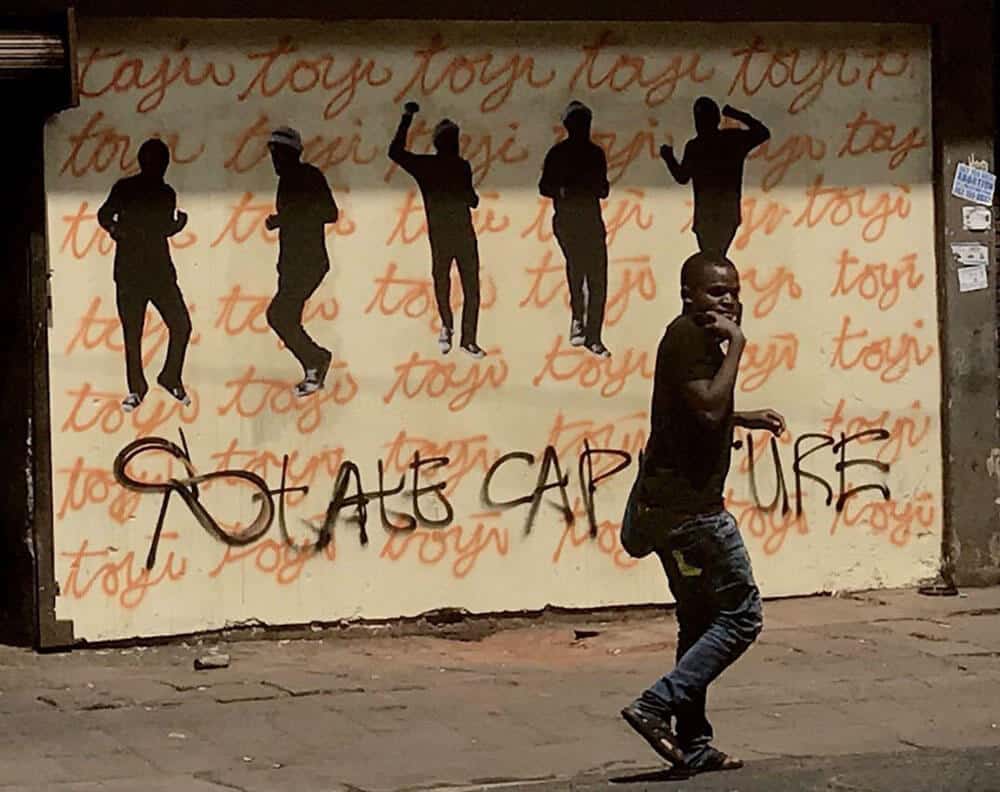 Sikelela Damane’s provocative artwork is currently up on the corner of Moseley Street, on the corner of Doornfontein in the Johannesburg CBD, says that “waking up every day with ideas to provoke the status quo”, is what gives him energy to work as an artist.

Two more artworks awarded at two thousand five hundred rand each went to Nomusa Mtshali and Scott Williams and are currently underway, with reveals that can be expected between now and February.

A grand-prize grant of twenty thousand rand is still currently available from the first wave of Street Capture and artists with captivating or controversial concepts that raise significant issues around the concept of democracy can apply www.streetcapture.org/grants-funding until the 28th of February, with the winning submission being awarded on the 10th of March.

Fundraising for the second wave of Street Capture is now live via   www.thundafund.com/project/streetcapture, through which members of the public are invited to make donations of any amount towards funding the second wave of artist grants.

For PR, interviews or more information

Art becomes an increasingly relevant mouthpiece as South Africa draws closer and closer to the 2019 South African elections. There are many people in the country who feel the need to take action and be heard, but are unsure how to do this constructively. What Street Capture offers the public is an alternative form of democratic expression.

Street Art Capture comprises of members from academia, civil society and the local art world and aims to grow the platform into a national movement that will assist the public to support artists and work towards socio-political change in South Africa.