Khehla Chepape Makgato reviews ‘Two Social Pacifiers’ at David Krut Projects in Johannesburg for ART AFRICA, a solo exhibition by the Ethiopian artist, Endale Desalegn. The exhibition is on show from from 5 November to 19 December 2015. 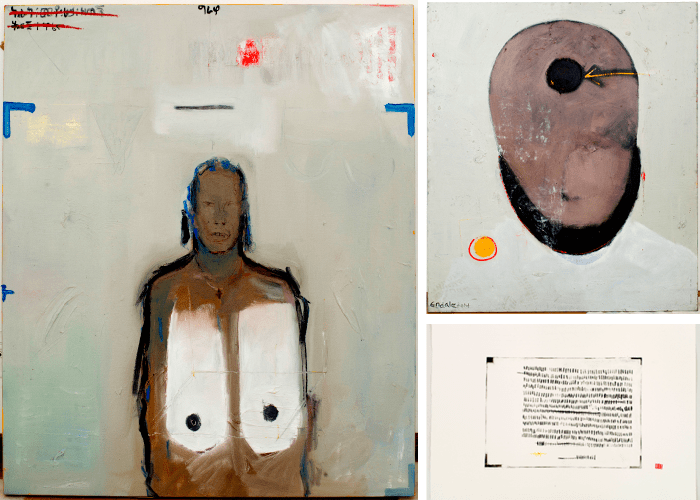 To describe the work of Endale Desalegn, it is prerequisite to investigate the art movements that have influenced him. The Ethiopian-born artist has adopted a knowingly impersonal paint application and delineated areas of colour with particular sharpness and clarity as a reaction to the more painterly or gestural forms of Abstract Expressionism. There is a range of movements employed in his work, including Abstraction, Expressionism, Cubism and Hard-edge painting. Talking to him during the opening of his solo exhibition, Desalegn said, “For the longest time now, I have been trapped in the darkness regarding my approach to painting, which was inspired by the ‘Switch’ body of work that I pursued on and off back home in Addis Ababa. Now I am approaching the light side of my life with painting.”

His solo exhibition, ‘Two Social Pacifiers,’ with its assortment of paintings and prints – following completion of his second year of residency at David Krut Projects studio in Parkwood – explores the impact of socio-economic, political, socialist and religiously-charged subjects. Hard-edge painting is a movement noticeable in his work, which in his case is both figurative and abstract. His ability to mix cultures, eras, media and techniques lies in his keen eye for juxtaposing shapes, colors, textures, poetry and visual language onto a canvas. These energised investigations are statements about the rich tapestry of cultural history and Desalegn’s lively interest in it.

“If you look at society today, some people have bottle full of milk and others just have a pacifier, which gives birth to the idea of using socialism combined with capitalism as a metaphor in my work to convey a message,” said Desalegn pointing to one of his pieces, titled Pretender. In this painting, he communicates the issue of selfishness and greed, arguing that “selfishness is the nature of human beings” and that those too obsessed with control and power will always do their best to maintain the status quo. 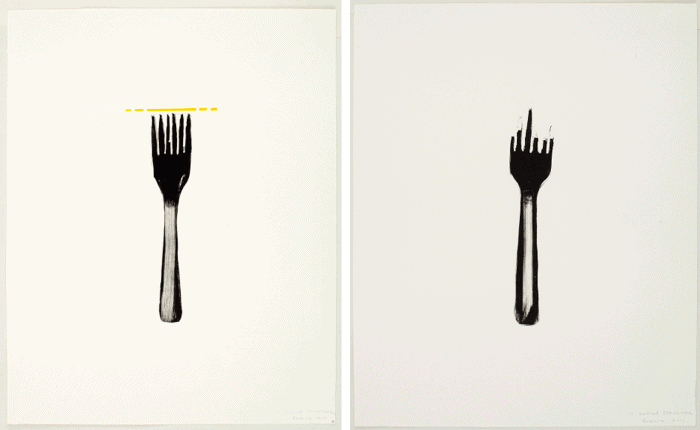 Desalegn has dedicated this exhibition to his mother, who he says has played an integral role in his practice;. “My mom inspired me a lot to think about Christ when I was a little boy.” Another important influence is the ‘great joy’ of literature, not only the inherent beauty of poetry and the clarity of its observations but also its artistic portrayals, which are appropriated by the artist in his work. Desalegn employs both text and phraseology from his mother tongue, Amharic, the essense of which may be eclipsed by the visual narrative for viewers who do not speak the language.

It would seem that Impressionism has also had its part to play on Desalegn’s work. Often, he returns to the same subject in various parts of the same canvas or develops the thoughts that preoccupy him across various works. This is fascinating as it makes for somewhat long-winded but at the same time inspired moments that read like beguiling variations on the same theme. His explanations of his own work contain great intrinsic intelligence, giving credit to his surroundings at the time of creating his paintings; “Some of the elements in my work may not have a direct meaning –  for example, maybe I heard dogs barking at the time I was painting this work, so I try to give credit to that dog; perhaps it was raining when I painted that work, so I try to write about it.”

Desalegn hints at the subject of religion and argues that some religious leaders claims to be saints when their deeds indicate otherwise. His work playfully considers biblical texts; Desalegn has constructed his own texts, using passages from religious tracts, which he has confessed to applying in diverse situations in his own life.

The weight of his visual images have sufficient intrinsic appeal to be read and understood outside the professional circles of art historians and critics. Some of his work betrays the eye already schooled in the artistic profession, accommodating ordinary people from all walks of life.

‘Two Social Pacifiers’ is on show at David Krut Projects, Johannesburg, from 5 November to 19 December 2015.

Khehla Chepape Makgato is a Joburg based independent artist and arts writer, contributing articles regularly to ART AFRICA and The Journalist online publications. He works at Assemblage Studios and The MediaShop and is the founder of Samanthole Creative Projects & Workshop, a community-based art organisation focusing on arts and literacy youth programmes.