Fifteen years on since he last exhibited on the African continent, Nolan Stevens sat down with Yinka Shonibare MBE to discuss his upcoming exhibition at the Goodman Gallery in Johannesburg – ‘Ruins Decorated’. Their conversation largely revolved around the complexities of the contemporary African art aesthetic – a topic Shonibare holds close to his heart. 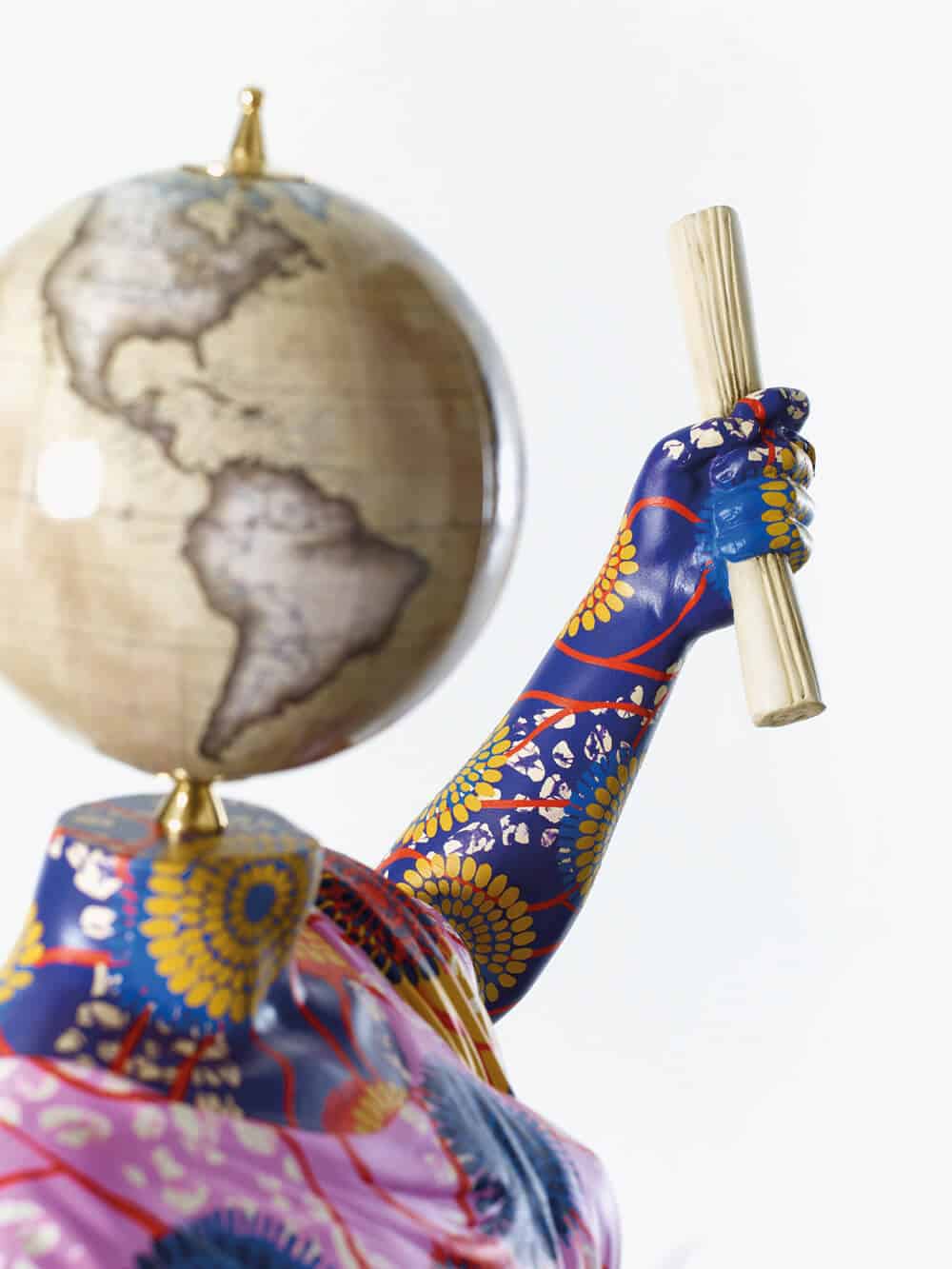 Nolan Stevens: Your exhibition opens on the 1st September 2018 at the Goodman Gallery in Johannesburg. Other than your ‘Wind Sculpture’ which is set to be unveiled at Cape Town’s Norval Foundation next year – what can we expect to see at ‘Ruins Redecorated’?

Yinka Shonibare MBE: I’ll be looking at the end of an empire and considering a remaking of the hybrid identity of post-colonial citizens of Africa. But in a way, I’ve actually gone back to look at two separate empires. So – there’s the Roman Empire and then the British Empire. Of course, the issue of African independence after colonialism will also be a plot in this exhibition. The Roman sculptures on show are refitted with colours of the fabrics I use. Some of them are created from this ideal of Roman sculptured objects, and have been deliberately charged by this ideal of white marble as being a civilised theme of a westernised cultural aesthetic. So that view has been challenged by the way these sculptures have been appropriated.

To take a step back to the unveiling of the ‘Wind Sculpture’ – their post-colonial undertones have always been fascinating to me, as I’ve always tied themes of African migration to them. Being a South African, I’m particularly interested in the way apartheid laws forced people to move between areas purely based on their race. For me, it’s this understanding of migration that lends the ‘Wind Sculptures’ a unique meaning when placed in a South African context – as opposed to when they’re exhibited in Europe or North America. Do you have any thoughts on this assessment of your works in an African environment?

I think that the story of the patterns I use is about trade between different nations. The fabrics are Indonesian influenced and it’s kind of interesting because when you factor in the Dutch heritage of South Africa, because actually, the fabrics I use – that everyone sees as intrinsically South African – were actually industrially produced by the Dutch, and sold on the African continent. So, the fabrics themselves already embody that spirit of the interrelationship of cultures – but also, the symbol of wind is akin to travel or migration. I think there are lots of Africans who are hybrid in that culture.

You know, if you live on the African continent and you don’t speak the English language, you’ll be impacted economically. I say this because as Africans we’ve always had to operate between two cultural spheres. It’s a case of survival and sometimes we’ve got to move through that, and you have to get Western education to do that. You can’t remain still – you realise that your economic survival is actually linked to your ability to survive.

For those of us who’ve gone to Europe, we’ve gone through the same things. We’ve obviously moved for the same reasons. The same is true for those living on the continent of Africa as well, because you will find that in most cities all over Africa there are many people from rural areas who have migrated to those centres. In most cases, the language of commerce is not the indigenous language and you do have to be aware that there is a whole kind of economic-cultural exchange that takes place for economic gain. There is a whole cultural transformation that takes place and you really have no choice in that regard, or else you will be left behind economically. There are very strong reasons for some of these migrations.

Some time back I interviewed Sola Akingbola – the percussionist for the UK jazz -funk bank, Jamiroquai. Akingbola is also Nigerian, and of Yoruba roots. We discussed how he’s still able to maintain Yoruba rhythms and beats, despite living away from the continent for so long – his music still sounds distinctly African.

I’d like to put the same question to you  – how are you able to inject your work with ‘African-ness’, despite not living on the continent?

That, I think, is a question you could also put to a white African and they’d have the same answer. Culture is not necessarily racial, you know – it’s about location and background. If you’ve grown up in a certain place, it’s quite obvious that aspects of where you’ve grown up will be part of your DNA. But if you brought a child from Japan and raised him or her in Lagos, they probably would be African in their preferences and mannerisms. It’s about culture, really, and that’s not some kind of integral element. You just pick up things from where you’ve grown up. In the same way, there are black kids of African descent in Britain who have never been to Africa – their culture wouldn’t be African, but instead black-British. I certainly wouldn’t take the position that there is an essential element of culture in people based on their heritage.

It’s interesting to hear you point out that that question could be posed to a white African too. I’ve had many debates on this with friends of mine who are white, who maintain that they will not call themselves African, or South African and they see themselves as being of European heritage – even though they may be the fourth or fifth generation of their family born here…

That’s true though – they are of European descent. But culturally, I know of white South Africans who come to  London and they don’t get on very well here because the culture is too different. If you were to put your friends in London for an extended time period, just wait and see how long it takes for them to start missing home.

I was recently listening to a 1-54 conversation that took place in 2014  between collectors Sindika Dokolo and Simon Njami. At some point during this conversation, Dokolo remarked that it really upset you to know that he was the only African collector who, at that stage, was collecting your work.

I’d like to ask you two questions based on that. Firstly – is this still the case, in terms of the number of African collectors collecting your work? Secondly – now that you’ll be showing on the continent again after a fifteen-year gap, how important is it for you to have your work engaged with by Africans?

I think it’s very important that African collectors should be collecting my work – because I do represent something of Africa, I did grow up there. Besides the fact that I would like African patrons to collect my work, I think all of my work shouldn’t end up in one specific place. I’m quite happy to be in European, American and Asian collections, but I think it’s equally important to have African collectors. Things are changing a lot – there are more art fairs around contemporary African art happening, and now I have representation on the continent.

Maybe that’s what I needed all along? Maybe I should have been with an African gallery all along? Maybe that would’ve changed the game a bit? But, you see, I had to join a gallery on the continent at the right time for me, and it seems to be the right time now. Also, more 1-54 art fairs are happening. When I spoke to Sindika about that, there was no 1:54 Art Fair and I did not have a gallery on the continent. 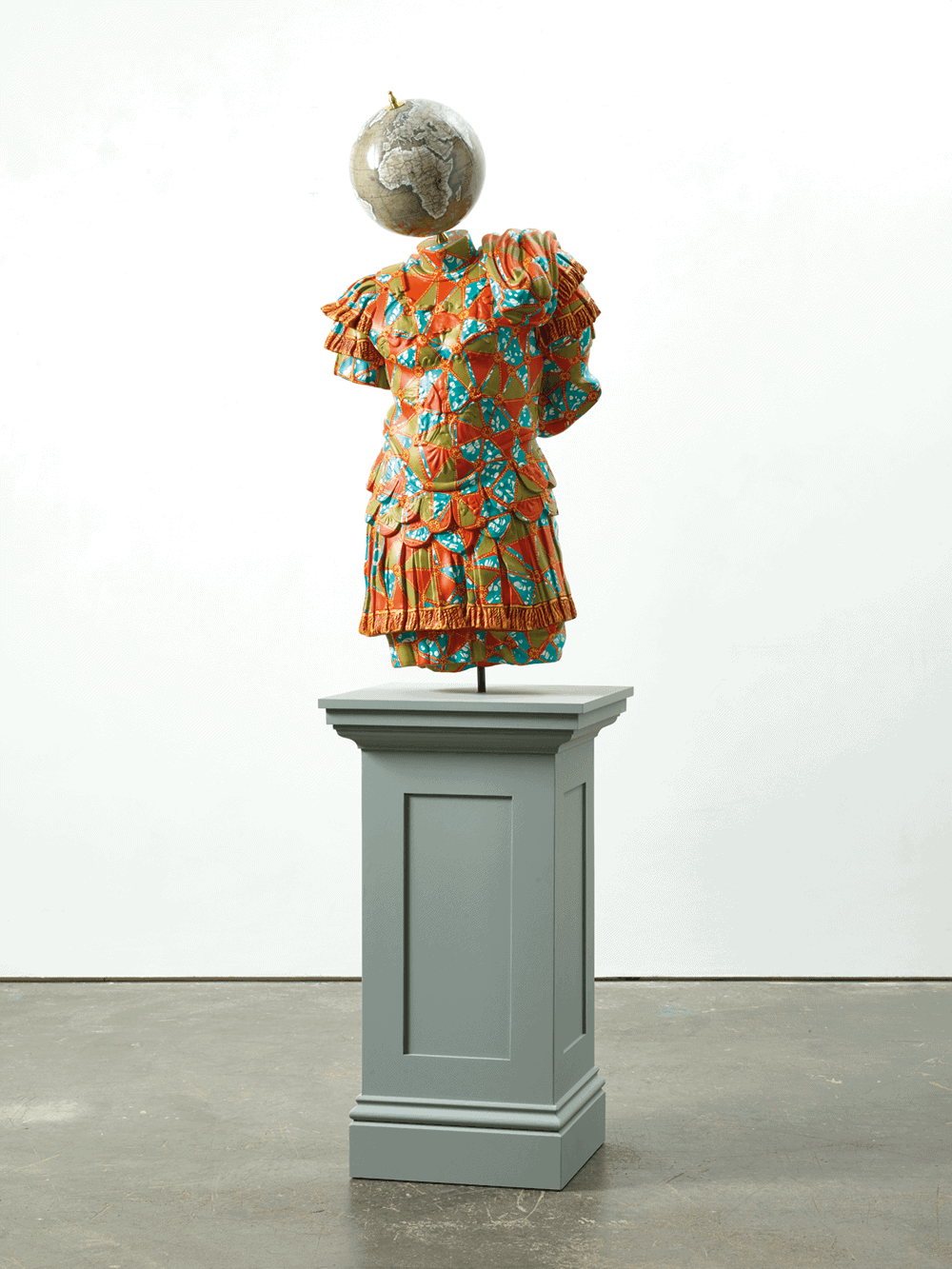 In a conversation I recently had with Wolfgang Tillmans, he mentioned that he made a conscious decision to move away from exhibiting in places like Australia, Europe, North America and Canada, and rather exhibit in Africa, South America and Asia. He described this as a power shift – not solely in terms of financial capital, but in terms of intellectual capital. Tillmans believes that if more artists start showing their work on the African continent, and start talking about spaces where western art doesn’t naturally aim to reach out to, it will fill those intellectual gaps.

That brings me to a point I’d like to make in relation to what you’re saying – I’m currently building an international residency space in Lagos, Nigeria, and I’ve been on that project for a while for exactly the same reason of people’s perception of Africa. This is why I wanted to build this residency centre – to bring people there, and also, to educate local people to try and understand art. So local people can have that exchange.

The power of the west has shifted, I think there’s something different. I think the rest of the world is going to leap frog them. I mean if we just look at the population of young dynamic people who are on social media; they are the ones who share content and are living a more open life. I think that’s the way the world is going to go, and people are starting to look at the continent in a way that they didn’t, say, even forty years ago. Also – while it is very easy to show in Europe, because of the historical dynamics, it is becoming much more interesting to show on the continent of Africa.

I’m really glad to hear that you see Africa as an exciting platform for art conversations and artistic production to be taking place. Having said that, I’d like to ask what realm you see contemporary African art inhabiting currently, in terms of its place in contrast to the rest of the globe. Do you view contemporary African art as something that is taken seriously by the West, or is it, as some have said, just a passing fad?

You know, I think that the art world does depend very much on fashion – fashion is not something you can necessarily take away from the art world. There will be movements that come and go,  but that’s not really important because the whole issue of it being a fad or fashion isn’t for the artists themselves, that’s for the market. Culture is always there. I think it’s up to the artist to create interest in things for themselves, and that’s when people will follow.

Artists, in my opinion, should never follow the market, or any kind of trend, because the market follows artists. At the end of the day, any good artist will be followed by the market and not the other way around. The point I’m trying to make is:  art is about being pioneers, it’s about creativity after all. Art is also capable of constantly changing ahead of society. That’s why artists have to always be the ones dictating terms of how their work is viewed.

That brings me to my last question. When it’s all said and done, this exhibition is done and dusted, and you’ve returned to your studios in the UK – what is it you would like South African and African audiences to gain from this showing of your work on the continent?

I hope that people can have debates around the work. I am going to be doing a couple of talks when I’m there in South Africa and have dialogues with people and I hope the work entertains as well as educates. That’s what I hope this show will do.

There is without a doubt an evident zeal in Shonibare’s tone ahead of his Ruins  Redecorated  exhibition. With there seeming to be so much at stake for this artist and his artistic return to the continent of his birth. One can only wonder how Africans will react to the dynamic socially charged Afrocentric works. 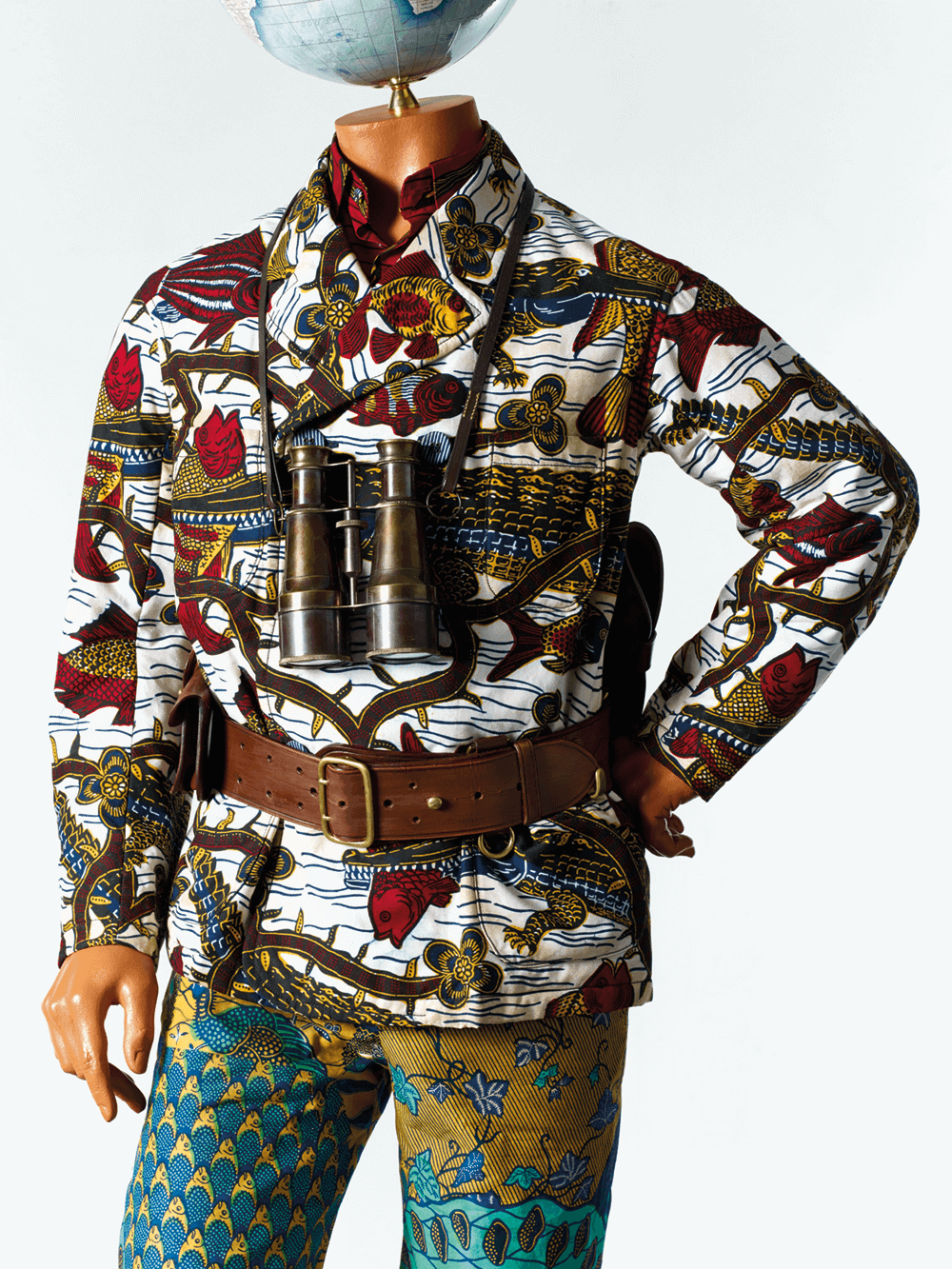 ‘Ruins Decorated’ will be on view at Goodman Gallery, Johannesburg, from 1st September till 6th October 2018. Norval Foundation will be unveiling their ‘Wind Sculpture’ aquisition early February 2018.