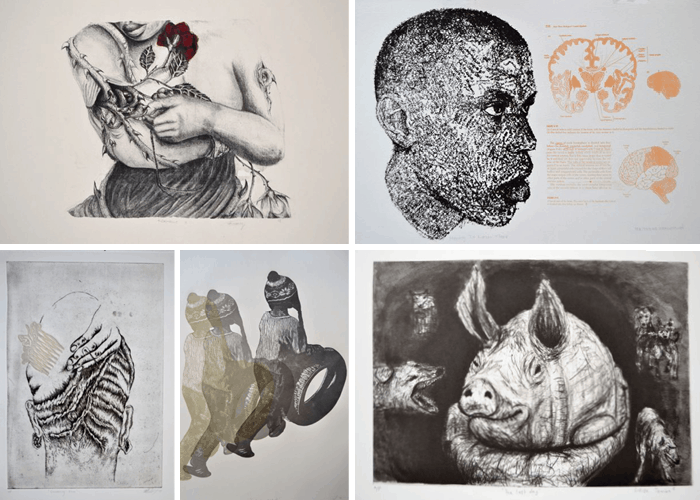 These students in particular aren’t academic graduates, yet they seem to possess an enhanced sense of articulation and a deep understanding of our inter-dependence on each other in a functional world. On number of occasions I have seen them working collaboratively – a concept deeply rooted in the art of printmaking – even though their subjects may vary widely. Each of them is endowed with the gift of visual storytelling. ‘UNCOVERED’ exhibits a compassionate intelligence and the capacity for intimate portraiture from their personal experiences. 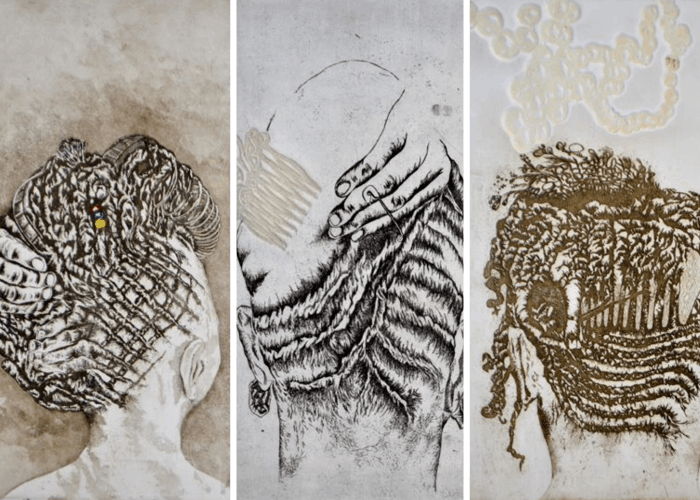 LEFT TO RIGHT: Lebohang Motaung, Botle boya sebelletswa, Grooming time and My costume for my beauty [DETAILS]. All images courtesy of the artist and Artist Proof Studio.

Anton Chekhov – Russian physician, playwright and author – once said, ‘Dissatisfaction with oneself is one of the fundamental qualities of every true talent,’ Lebohang Motaung, a printmaker and hairstylist, is the epitome of this statement. Motaung documents, through the fastidious technique of etching, the process of patterning, texturing and styling she goes through when plaiting African hair for her clients. She also speaks of the stories told during her client’s expeditions to her salon. In prints like Bontle Boa Sebeletswa (a Setswana saying that loosely translates as ‘beauty is hard-earned), there is not only masterpiece of visual economy and textural grace but also a manifestation of hybrid hairstyles used as metaphors for the subconscious and conscious relationship between herself and her clients.

Matthews Makgotlho has been struggling with learning disabilities for years. His way of working is verbose; he makes a starting note here, a counterword there; establishes a dynamic relationship between perspectives and curls, adds a counter-theme, introduces a little blurring; creates a revelation through juxtapositions, implies an enigma through lopping-off. The literary equivalents of visual puzzles and bits of emptiness in monochrome colours interrogate each other; biological human structural shapes vie for space on the Fabiano paper. In his silkscreen prints, Encouragement and Forgetting and Hoping To Learn More, Makgotlho admits to making his difficulties and methods of learning visible; “I use the subject of psychology as an area of study in my work, as this was a subject I very much wanted to learn at school but was not able to due to my disability,” he says, “My prints become the material of my learning – I use my notes from my study sessions and turn them into images.”

A full appreciation of Kelebogile Masilo’s work requires a certain degree of involvement, an intellectual response or, as in the case of her love-stories, an emotional one. Her selected body of work consists of technically enchanting lithograph prints, which are not simply startling in showing off her technical mastery but mesmerising in their conceptual approach. Masilo weaves back and forth between various categories of femininity and the warm affirmation she has for her mother. In Ha Kea Fellwa Ke Maatla(loosely translating from Setswana as ‘I Remain Strong’),she draws our attention to the key symbol; “I use the rose, symbolising my mother’s presence in me,” she says, “The narrative in this series follows my personal struggle in taming these ‘roses’ that grow from beneath my skin, giving rise to my morphed, hybrid figure.” There is an apparent nostalgia for the security and comfort of the womb, shutting out the strangers and alien world; Masilo looks to those she could confide in for security, namely her mother.

LEFT TO RIGHT: Matthews Makgothlo, Encouragement and forgetting and The study of the brain system; Kelebogile Masilo, Ke Imetswe and Hakeafellwa Ke Mata. All images courtesy of the artists and APS.

An intimate portrait is evident in Bokang Mankoe’s work – unexpected and important. Constructed Speech becomes a profile of courage, emphasising the need for the construction of a “perfect man.” Mankoe uses the Golden Ratio face mask and the geometric lines that accompany it to construct himself in the image of the ideal man. He also pays homage to his father, drawing our attention to the surprising and startling stretch of his father’s abbreviated life. The death of his father endowed the artist with immediate responsibilities as the first-born and eldest of his siblings, effectively inaugurating him as a father figure in the family. He wrote in his statement about this early adoption of responsibilities; “I looked at what would be the perfect male figure for my siblings… [turning] myself into this perfect man.”

Mandlenkosi Mavengere is a young printmaker who talks of economics and politics in his work. He wrote in his statement, “My artworks are meant to bring into conversation issues of migration in our contemporary society. I travelled from Zimbabwe to South Africa because of my economic situation.” In his work, we are reminded that the country that we live in is more often the result of accidents in history and geography than personal choice. The concept of immigration has been and continues to be a key spoke in the wheel of human evolution. Mavengere uses the image of his own face in A Place I Call Home, replacing the well-known Big Five on the South African bank notes with his portrait in the foreground and introducing what appear to be farmworkers in the background along with a striking juxtaposition of rural landscape and panoramic cityscape in the distance. With an emphasis on money as the root of migration, one might interpret his work against the background of a dwindling South African rand and the lack of foresight from the leadership in his country of birth, Zimbabwe; what used to be the breadbasket economy of Africa has steadily disintegrated into a country whose citizens have dispersed across the world in search of bread.

In Mental Release, Goolam Saber Chavoos challenges himself, the viewer and the tradition of printmaking, privileging composition and verbal realism over images alone. These abstract visual narratives reveal his poetic endowment, as he eloquently puts it, “Fragments from the past may keep us from reaching out full potential, holding us in the shadows of ourselves.”  He argues that experimental performance in conjunction with other processes became the vehicle for his mental blocks to be documented and dealt with. 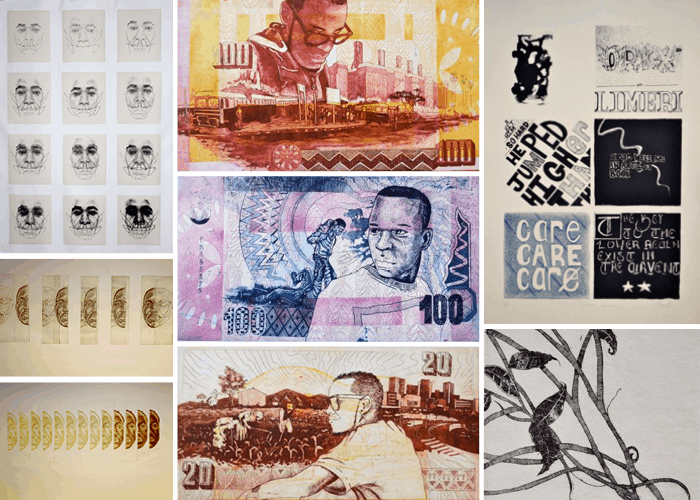 Each artist in this exhibition places printmaking at the centre of recording the unfinished and ever-evolving business of social examination and the reanimation of human memories. Lindokuhle Zwane interrogates the nostalgias of a township boy who knew only used car tyres as toys. “My process involves photographs, capturing moments that I feel nostalgic towards,” says Zwane. He is interested in how the past interlaces itself with the present, creating a psychological barrier that keeps us from moving forward. He hopes that his work will open unspoken dialogues.

The Alexandra Township, located on the outskirts of the illustrious Sandton City in Johannesburg, has managed to accommodate countless South African legends and icons – including Nelson Mandela and Hugh Masekela among others – despite being poverty stricken Living in Alexandra, for Mandela, was a time of hunger, poverty and learning to be confident and self-reliant; a case similar to that of Sifiso Gumede. “I document the stories of Alexandra using visual language to create a dialog and acknowledges the township history,” says Gumede. His work is influenced by township and protest art, referencing the ideology of telling African stories through art. He uses linocut, a relief printmaking technique, as a metaphor for digging up untold stories. The medium has been used by generation of protests artists, such as Thami Mnyele and Wally Mongane Serote, who once stayed in the Alexandra Township during apartheid.

Matimu Lloyd Maluleke tells stories of his rural village of Giyani. He confides his innermost thoughts and expresses his personal philosophy whilst celebrating women from rural villages for their continued role in shaping our communities. “My work is about revisiting my childhood and upbringing in Limpopo,” he says “I look at the society where I have grown up and where the women in my community are commonly left to bring up their family.”

Achille Mbembe, philosopher, political scientist, and public intellectual, writes, “Crime is fast destroying the moral fabric of South African cities and is becoming the major threat to South Africa’s democracy as well as the not so hidden name of a ‘class war’ which itself is, to a large extent, a continuation of the ‘race war’ of yesterday.” Sifiso Temba translates Mbembe’s thoughts into visuals in his very busy and chaotic prints. “My work focuses on the issue of crime as one of the overlooked social issues in South Africa. I explore the complexity and social perception of crime as high levels of murder, rape, and theft threaten to deplete hope in our country,” says Temba.

In celebrating this significant exhibition with the artists, a gesture of congratulations should be extended to the collective educational team at Artist Proof Studio together with their education manager, Mr. Lucas Nkgweng, for all their efforts and dedication in shining a light on these emerging printmakers. The prints on exhibition are not only crisp but also affordable, especially for those wanting to begin an art collection. The show is curated by Robyn Nesbitt and will conclude at the end of January 2016.

Khehla Chepape Makgato is a Joburg-based independent artist and arts writer, contributing articles regularly to <ART AFRICA> and <The Journalist> online publications. He works at Assemblage Studios and The MediaShop and is the founder of Samanthole Creative Projects & Workshop, a community-based art organisation focusing on arts and literacy youth programmes.