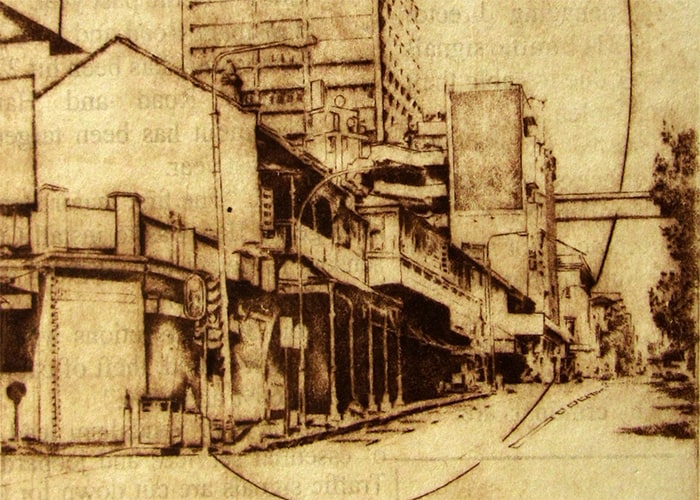 Abe Mathabe, Jozi I, 2015. Dry-point etching. (detail)
Creative individuals concern themselves constantly with the practice of defining the world around us, and they further attempt to make the terms in which we understand our subjects and objects for the ordinary person to relate or comprehend what is happening around him. The contemporary art landscape creates the groundwork for the emergence of new forms of visual language from past histories, and new ways of interaction, recollection and visualisation through the spaces and pilotable places that artists have travelled. Gallery 2 in Parkwood, Johannesburg presents a group exhibition comprised of the Johannesburg based printmakers; Abe Mathabe, Mongezi Ncaphayi, Themba Khumalo, Lebohang Sithole, Ramarutha Makoba, Donald Makola and Mario Saures. It is artists such as these that stretch the practice of defining this world even further.

The exhibition is a showcase of exclusive limited edition dry-point etchings and silkscreen prints. Each artist narrates a true account of his life – with segments knitted from socio-economic to spiritual experiences and from an appreciation of the city to the celebration of township life. This exhbition presents a series of ‘acrolects’ or ‘dialects’ of negotiation between mediums, objects, and subjects. This is particularly accurate when calling upon the work of art to be present for scrutiny in all its integral forms – both conceptual, and technical – in relation to the language of the exhibition’s ideology. These works offer up a multitude of varying perspectives, while at the same time remaining essentially self-referential as art objects. This means that they become in themselves a discussion across many aspects of themselves, as opposed to just one alone.

Taking into consideration the history of these artists, one realises that they have much in common, and that their ‘not-so-well-off’ family backgrounds have played an intergral role into their pursuit of art as a living. Abe Mathabe, arguably the senior exhibitor and printmaker in this exhibition, is quoted as saying: “Before going to school I realised that I could draw and build things. My parents did not have money to buy us toys so I built my own. I would make wire cars and sell them to my friends for 15 cents” Mathabe’s work contains within it a profound visual aphorism, logically guiding an eye into the way of life lived by the people he sees around him, and offering this eye a chance to be immersed for a second into their realities. 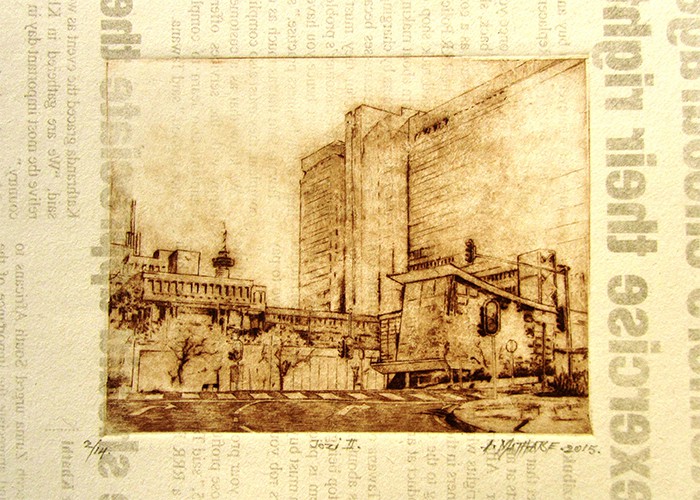 Looking at Mathabe’s miniature dry-point etchings, particularly the featured works, Dzopefo or Jozi I and Jozi II, one is not only fascinated by his delicate treatment of a needle that has incised fine lines onto the surface of the plates, but you also marvel at his choice of earthy-colours and the state of his subject on the final impression. Drawing closer to these masterpiece miniatures, you are absorbed and immersed in the artist’s poetic avant-garde. His work becomes a familiar story or a depiction one could easily identify with, but one which had not been visualised, described or percieved in the same way before.  Reading his titles aloud offers the chance to scrutinize and unpack one’s nervous curiosity and desire to deeply appreciate his work – the authenticity of which enables you to look for the answers before even forming the questions.

Stories about Johannesburg can be told indefinitely; while the style or details might change, the voice is still audible. Like Themba Khumalo, who decided to take the Jozi infrastructure as the location of his exploration within the material of aluminium plates – a place onto which he could now scratch or engrave his stories of the city. The city of gold, or Egoli, offers for many a journey full of promises that have pinned to them only the slight assurance of attaining a better life. Some people begin the journey all readily prepared and supported by those who came to the city before them, but for others it begins without dignity, or any sense of hope as they take shelter under bridges and on cold pavements. This experience of the city is one that is likely similar to that of the people who arrived at its’ inception in search of gold.  Khumalo characterises the city in his work to be a long lasting, obdurate and unfeeling creature. Frequently depicting the buildings, powerlines and bridges, the city in his representation, becomes a possessive rock with a phantom of hostility to some and a great deal of luck to others. 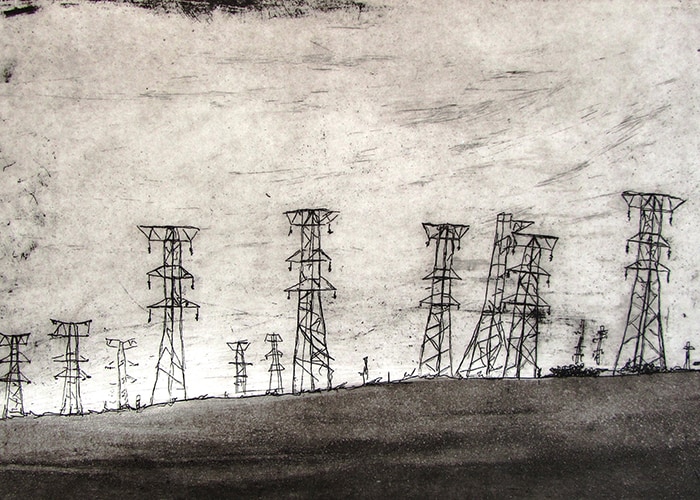 In a piece entitled Everyday Hustle, Khumalo depicts evictees, who it seems, having been cast out from their homes within the inner city, have just left their bridge, ready to face the hustle of the day with their trolleys on the move, collecting recyclable items from the bins along suburban streets before PIKIT UP trucks come round to take the trash to the dumping site.  They have a bridge to protect them from the rain but will soon, no doubt, will be forced away by the police from the area where the bridges are planted. It is part of the artfulness of the lines and grey colours in the background, demanding that constructions of interpretation be built upon his work, with correlative qualities adduced by wordless visual prose through every poetic insight it encourages.

Khumalo’s work is a fresh coat of paint rolling up a changing city, with titles that link his series of dry-point etchings to phrases describing a version of the Joburger experience. The result is a conglomeration of individual understandings that touch on our history and the personal frustrations and desires behind the triple challenge of the democratic state: poverty, unemployment and inequality. Greg Nicolson, journalist for The Daily Maverick, while writing on evictions in Johannesburg, sheds some light on the experience of those living in these conditions. “They were woken and herded out of the building before they had a chance to collect their belongings. They said they had no warning and no communication from the owner that they would be evicted after the building was sold”.

In his piece entitled She Stand By Her Family, Donald Makola proves the facts of life as an abstraction of something that is inherently changing and moving. His metaphorical use of construction tools such as spades, rakes and picks seem to connect to his sense of a world that is provisional. Certainties disappear and emotions which felt previously so unbelievably strong don’t necessary endure when looking at his work – there is a shift and change of perspectives, and loneliness chips in as the uninvited guest. The undervalued status of metaphors in the work of art and their potential to communicate meaning and subjectivities in newly globalised world is something that can be recognised by those who appreciate art. The literal meaning of using these tools situates the work in a position of reverence to migrant labour or exploitation that many people have endured within the city of Johannesburg, in a quest for a better life. This sense of reverence extends to the women who head households and glue families together even when their husbands have been swallowed by the migratory labour system and the gold mines. 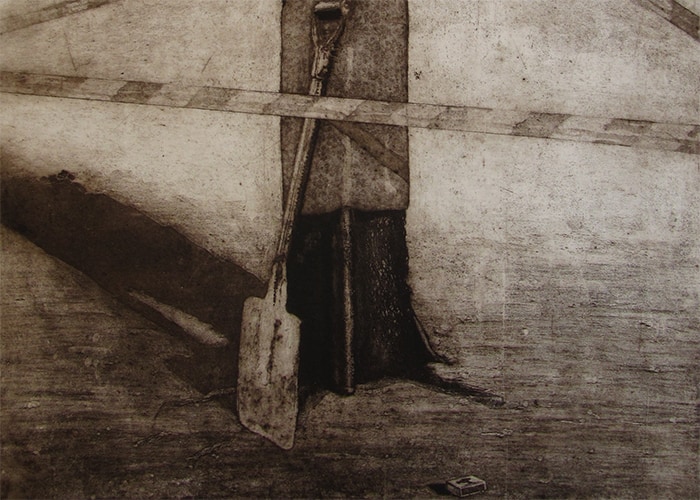 Donald Makola, She Stand By Her Family, 2015. Etching (Detail)

Mario Soares, a Mozambican born artist, contributes and adds his voice to the myriad of Johannesburg narratives. His large etchings that unfold and prolong engagement are emblematic of a moment when our visual world of the city expands through the representational narratives of geopolitics. His is the offering of a visual appellation. In his piece, entitled If You Never Been To Soweto, he looks at the township of Soweto with great authority – reinterpreting it into his own understanding of, say perhaps a tourist or an African who had never been to the township before. He isn’t telling the already familiar narratives such as that of Vilakazi Street, the street which is world famous street for having housed two Nobel Prize winners – Nelson Mandela and Desmond Tutu. No, Soares depicts ordinary Sowetans who would otherwise never make it to the mainstream media narratives, saving as part of crime related incidents. He celebrates simply the beauty of the township and its people as seen from his perspective.

If drawing is associated with genuineness and a kinaesthetic channelling of an artists’ consciousness, then Lebohang Sithole’s process represents the hybrid of methodology that is a sign of its time both in its effusive expression of drawing as process and its performative, politicised subject. The youngest printmaker in this exhibition, his work is structured around narratives of a township life – arguably Orange Farm where he stays – yet the functionality of his work as a visual record of activities happening in his life is visible. This work resonates with the viewer long after the moment when it is seen because of the poignant dichotomy and the impression in treatment of lines scratched in his dry-points, and the rhythmic sounds the colour creates in the background. This is evidenced in the work entitled Kuze Kuse – which loosely translates to: ‘Till The Crack Of Dawn’. 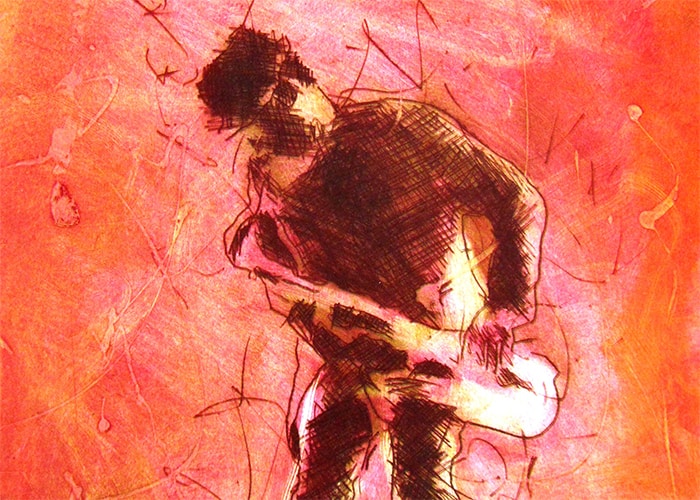 There are many chains of associations that are instantly visible to the eye when one looks at Ramarutha Makoba’s Back To Love silkscreen print depicting a giant, colourful tree. There is a stream of consciousness or rather a ‘highway of consciousness’, a thought well punctuated by South African artist, William Kentridge in his publication entitled Flute. “An image only makes sense because of the shadows in it. Without shadows, projections are meaningless. Without some light, shadows are inconceivable.”

Khehla Chepape Makgato is a Joburg-based independent artist and arts writer contributing articles regularly to ART AFRICA and The Journalist online publications. He works at Assemblage Studios and The MediaShop. He is also the founder of Samanthole Creative Projects & Workshop, a community-based art organisation focusing on arts and literacy youth programmes.