Half of the world’s population lives in cities. Numbers are increasing every day, with an expectation of 68% by 2050 (UN, 2018). What does this mean for the future of cities? What are cities like Accra going to look like, and who plays which roles in shaping these images? Gold Host questions, a London-based social impact organisation, addressed at their exhibition, held at Accra’s Nubuke Foundation last December. 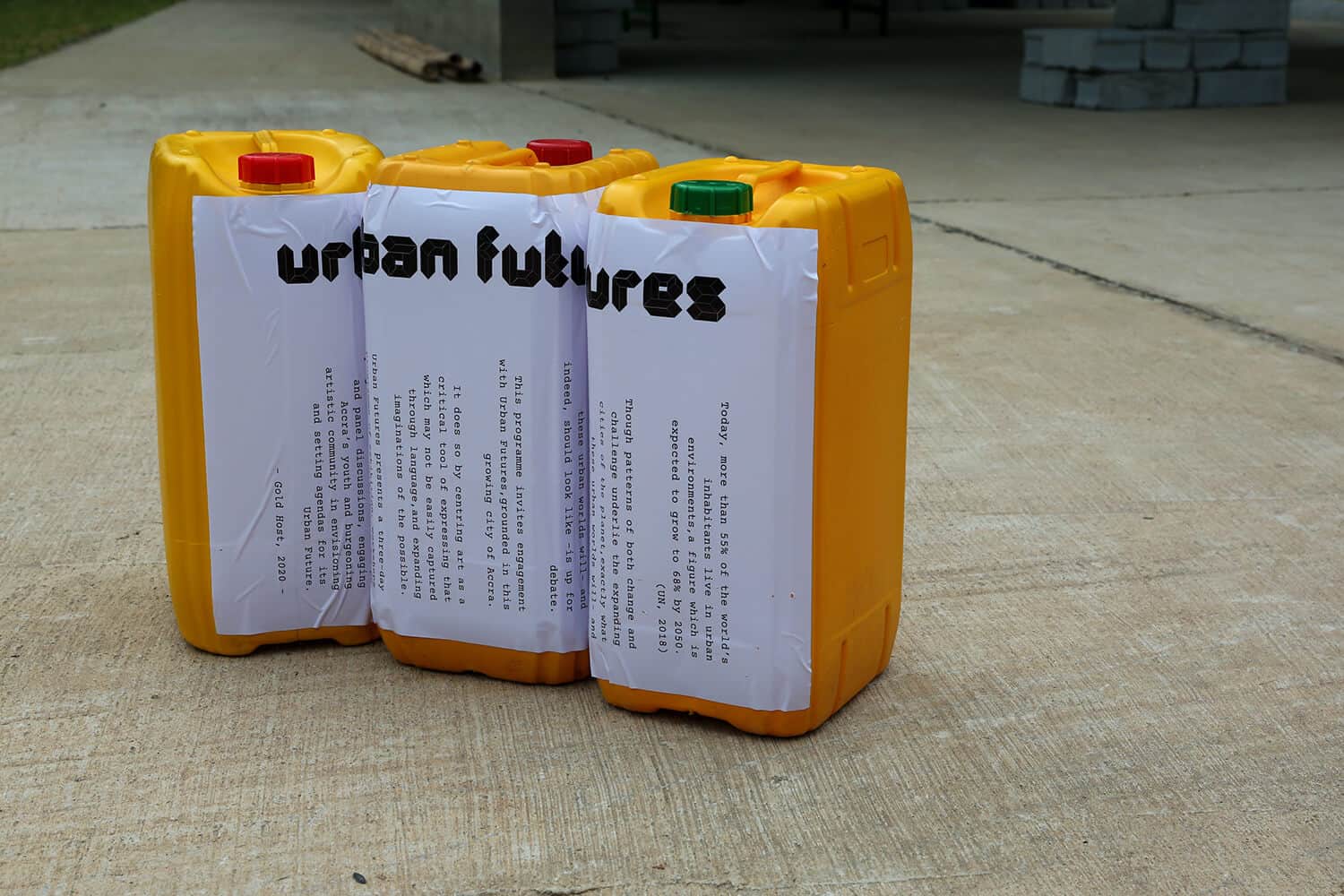 Emma Hanson and Kate Dawson are the founders of Gold Host, an organisation that champions mindful creative practice in the name of equitable planetary progress. They have been organising artistic events in London and felt it was time to give back to the rapidly growing city that shaped both founders. “We want people to feel that their ideas and opinions matter in the development of the city, because they are the city”, Emma shares. How does Gold Host hope to achieve that? Through art, “because art taps into an unconsidered aspect of our imagination”, she continues. “We want to create mindfulness about how Accra is expanding”, Emma explains. The event’s goal was not to point fingers or share one truth – Gold Host wants to open the floor to different realities and visions. “Accra has one of the fastest-growing economies worldwide. But we need to think about building cities for people and not just for profit. We understand why there is a rush to build, that people are trying to make a home, but it’s sometimes good to stop, pause and build for a purpose – being mindful.”, Kate adds.

This was an essential goal of the workshop; to open the children’s minds and have them realise they are the future of their city. 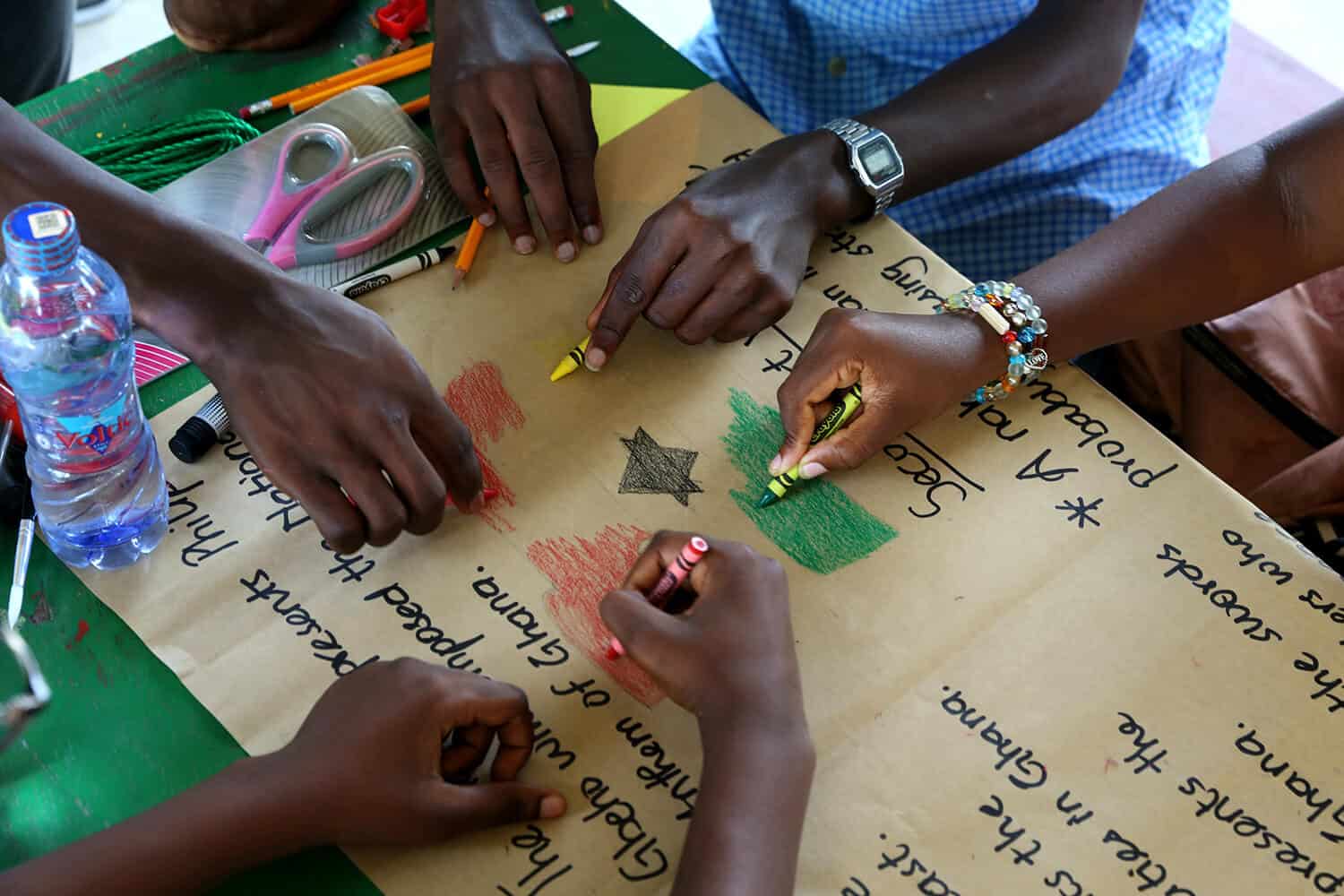 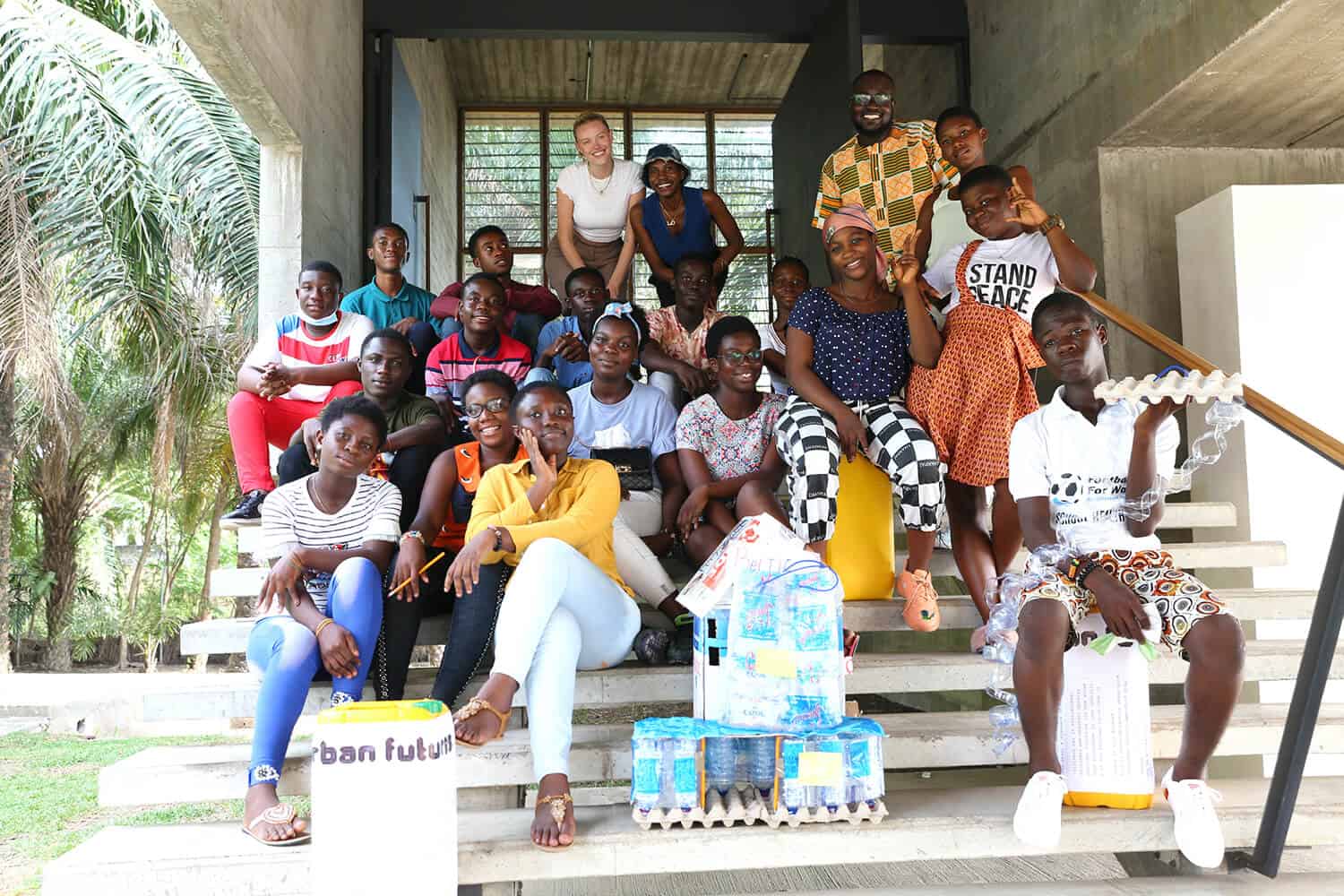 Gold Host transformed the Nubuke Foundation into an exhibition space that discussed the future of the city – through art. Workshops were held with pupils from Achimota and Accra Girls’ schools, in partnership with the Ghana Head of State Award Scheme (HOSA). “The work of David [Alabo] really influenced the pupils’ imagination during the workshop,” Emma says. “When Asia [Clarke] asked them about their future – at first, they said what they wanted to be when growing up. After seeing and discussing the works, their minds opened up, and we talked about Ghana’s rich hist. They used their imagination to design their future city in ways they would like to see.” This was an essential goal of the workshop; to open the children’s minds and have them realise they are the future of their city. “We want to provide space to people so that they realise they have agency. They can change the city they live in,” Kate adds. “A one-day workshop won’t change the world, but it can change you. You think of things you haven’t thought about before. You wonder why things are happening…”.

Each of the works stands alone, sharing its own story, yet, together they shape an exciting narrative on Accra’s future. 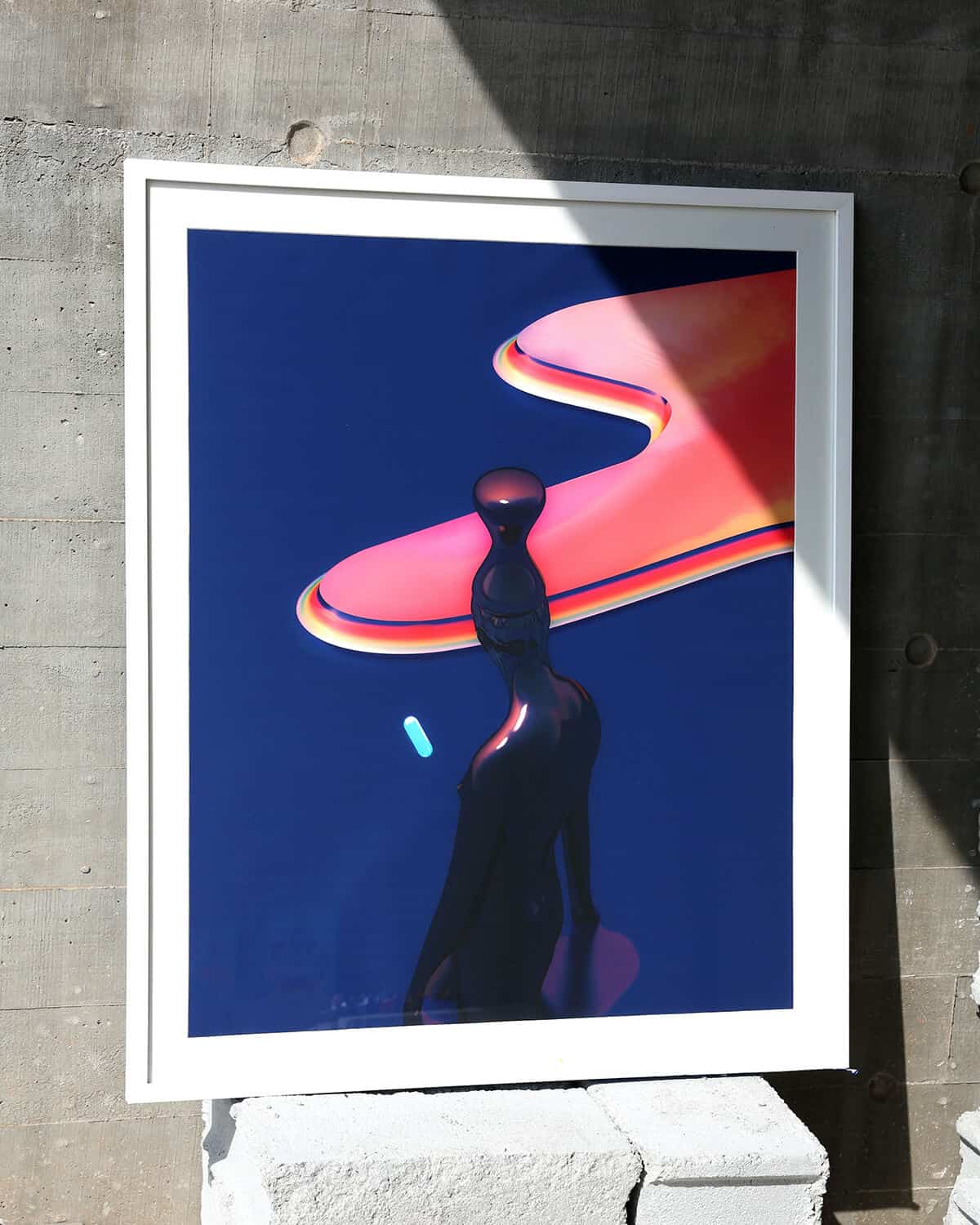 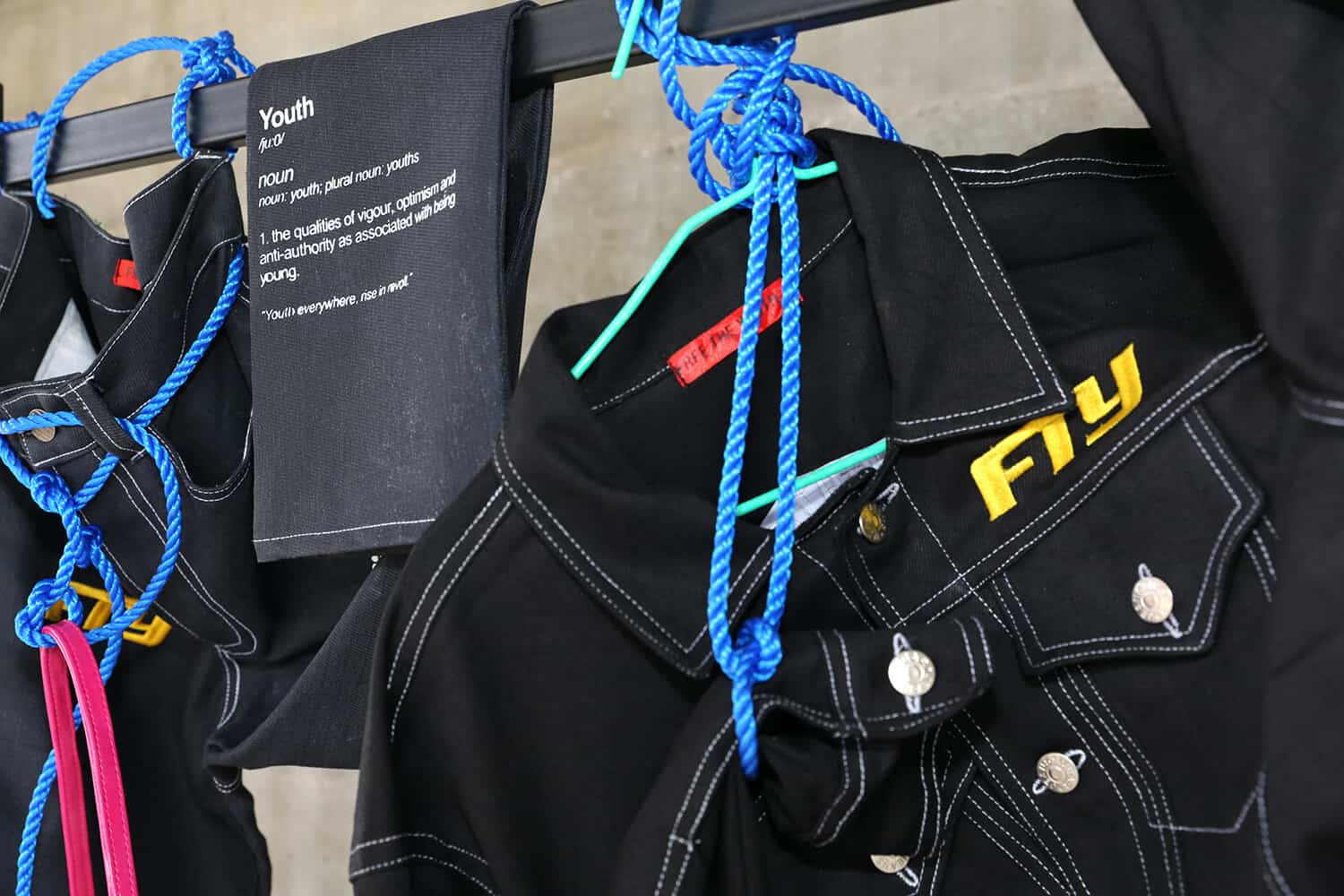 On display were works by multidisciplinary artist David Alabo, digital artist-in-learning Hakeem Adam, visual artist and creative director Nana Nyahan Tachie-Menson, artist Theresa Ankomah and clothing of creative collective Free The Youth. The event producer, Patricia Yeboah, played a significant role in selecting commissioned artists, ensuring that a diversity of artistic practices were represented. Emma explains: “Tricia did an amazing job. David is addressing the future in a more symbolic, futuristic way, Theresa is known for her use of traditional Ghanaian weaving techniques. Nyahan’s work is wonderfully psychedelic and doesn’t come across as ‘typically Ghanaian’, while Hakeem’s digital work transcends first impressions, and the clothes of Free The Youth symbolise the pioneering attitude they exemplify and lead around street culture in West Africa.” Each of the works stands alone, sharing its own story, yet, together they shape an exciting narrative on Accra’s future. 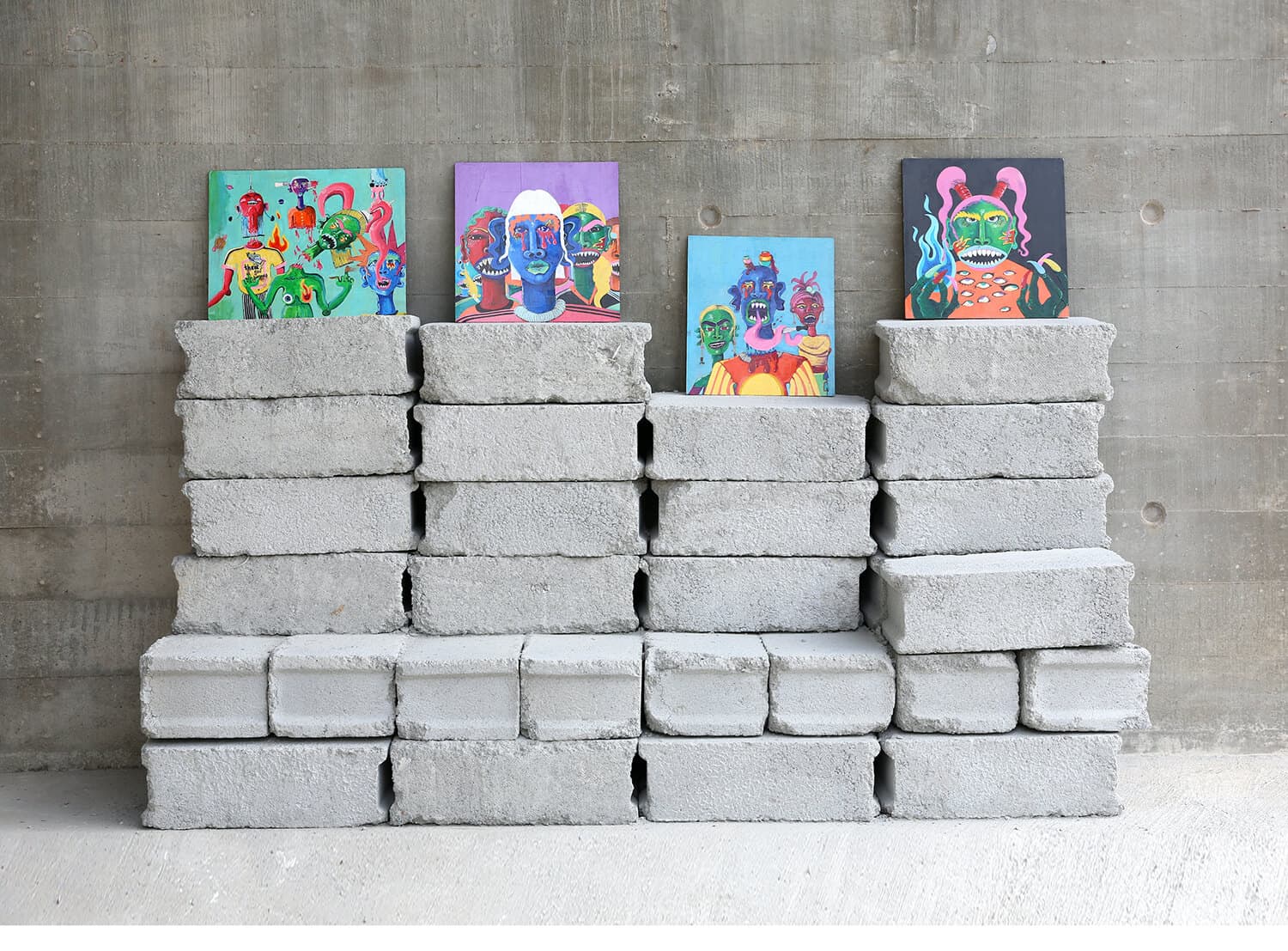 Making the event virtual, and therefore international, Gold Host invited Na Chainkua Reindorf, a New York-based artist of Ghanaian heritage, to participate through Instagram Live. Na is an artist who works with textiles, tapping into the politics of dress. Dominique Petit-Frère, founder of Limbo Accra, and Na discussed Black Female Representation in the Arts.

On the last day, multidisciplinary producer Sharifah Isakka led a panel discussion with Stefania Manfreda (Elle Lokko), Joey Lit (Free The Youth), Asia Clarke (DEP Africa) and Amarachi Nwosu (Melanin Unscripted). They discussed ‘The Role of Art in Accra’s Urban Future’, where they discussed the role of art in the city and the city’s development – both as they have experienced it and may hope to share it. 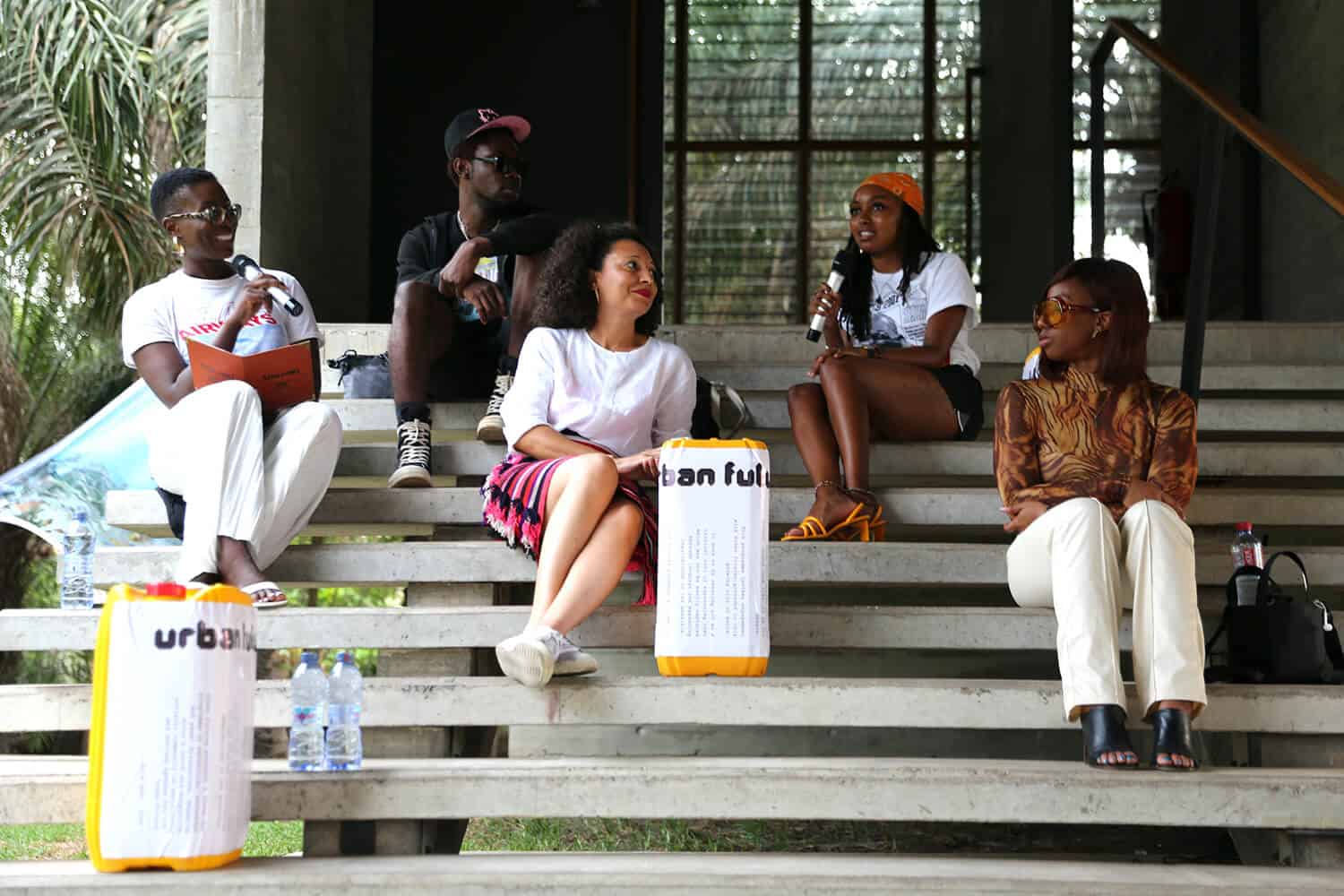 Panel discussion during the course of the Urban Futures event. © Working Progress 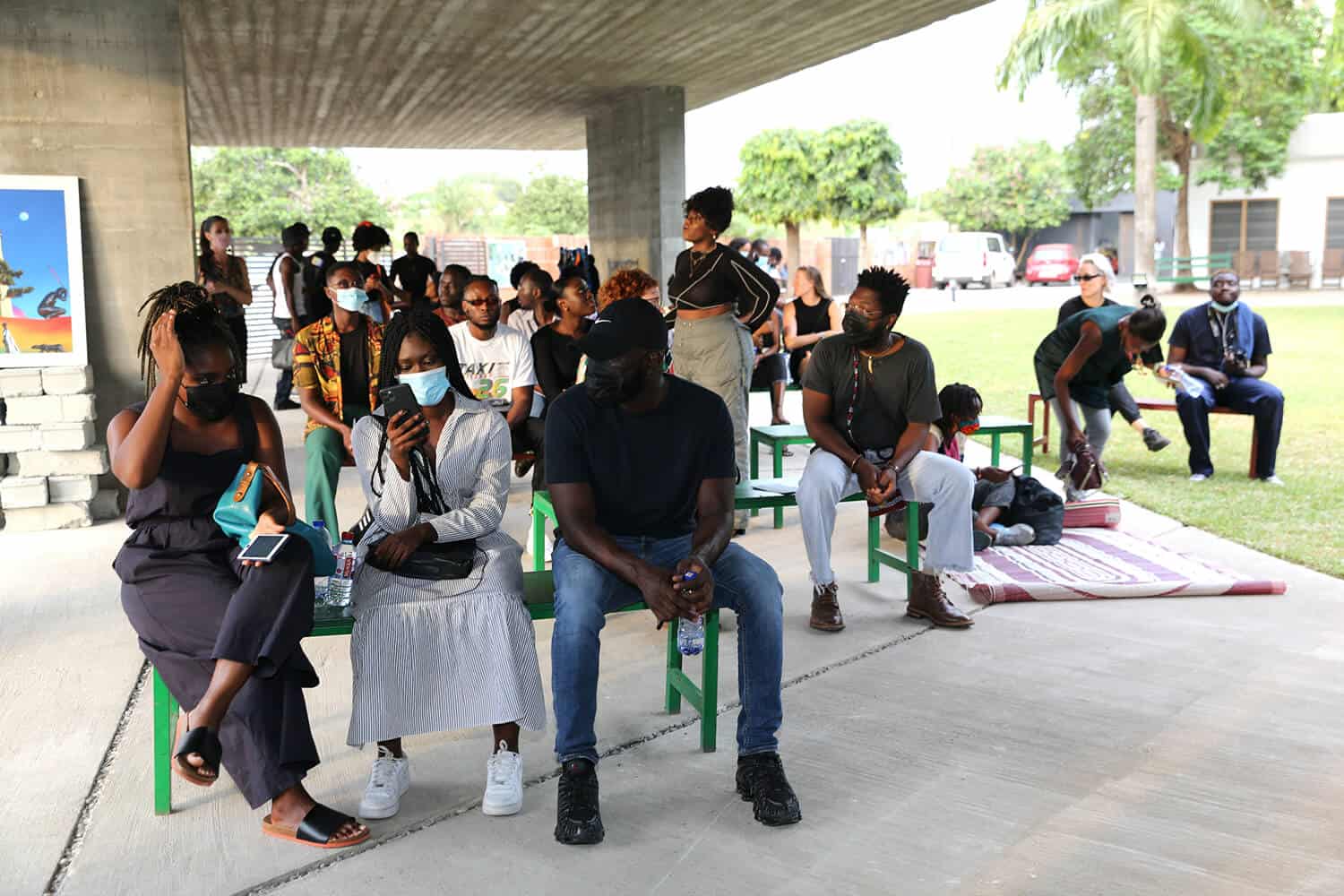 Crowd at the opening of Urban Futures. © Working Progress

Urban Futures was the first Gold Host event in Accra – yet it set its tone well. They have shown what they are about by working with diverse Accra-based artists and engaging a wide array of voices and viewpoints.

Speaking of their social impact showcases, of which Urban Futures was one, Gold Host closed with “We work needs-based. We’re not going to create things for us to do here. We are listening to the needs people express… We want to create space that is both needed and desired… To become the best hosts, we can”. In 2021 they, therefore, aim to connect with more artists and creatives from the city to curate dynamic events and research-based projects.

Urban Futures is an artistic programme that engaged the people of Accra – youth, artists, community members, and changemakers – in envisioning potential futures for the city.

Carmen (MSc) is a style anthropologist, writer, creative producer and part-time deejay. She sees style as a visual expression of identity, a means by which we indicate who we are and who we identify with. Much of her work rests on a foundation of research into fashion and popular culture in urban Africa, for which she spends the more significant part of the year in Accra (GH) and Lagos (NIG).