The Killer of the World

Over a year has passed since the Rhodes Must Fall (#RhodesMustFall) movement was incepted into the national psyche. Such has been the power of this student-led movement that it has come to define the very nature of contemporary political, socio-economic and cultural struggle. 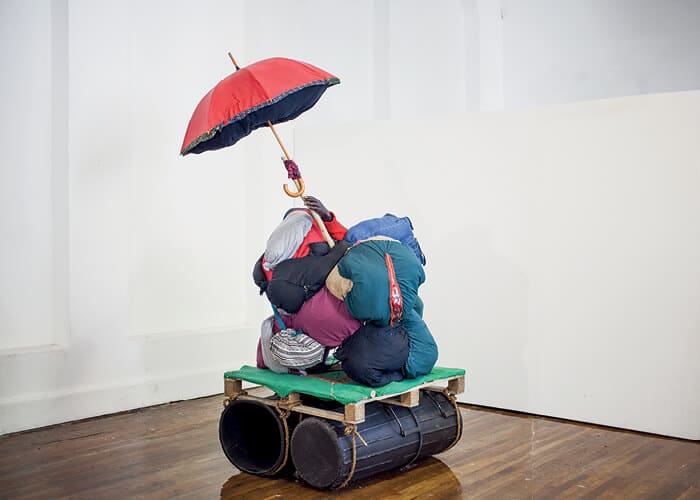 Centred upon ‘black pain’ and ‘infrastructural racism,’ Rhodes Must Fall has proved a long-overdue material and psychological struggle against the corrosive suppression of black agency. In a necessary return to Steve Bantu Biko’s battle in this beguilingly seductive yet toxic neo-liberal moment, the movement serves as a trenchant reminder, after Biko, that “the first step… is to make the black man come to himself; to pump back life into his empty shell; to infuse him with pride and dignity; to remind him of his complicity in the crime of allowing himself to be misused and therefore letting evil reign supreme in the country of his birth.”

With this realisation at its core, Rhodes Must Fall is as much a critique of ‘state capture’ by the ruling party as it is a critique of all institutions which have insidiously maintained cultural, economic and psycho-social divides. The tertiary education system, therefore, has proved a theatre for a greater sphere of despair and contestation. 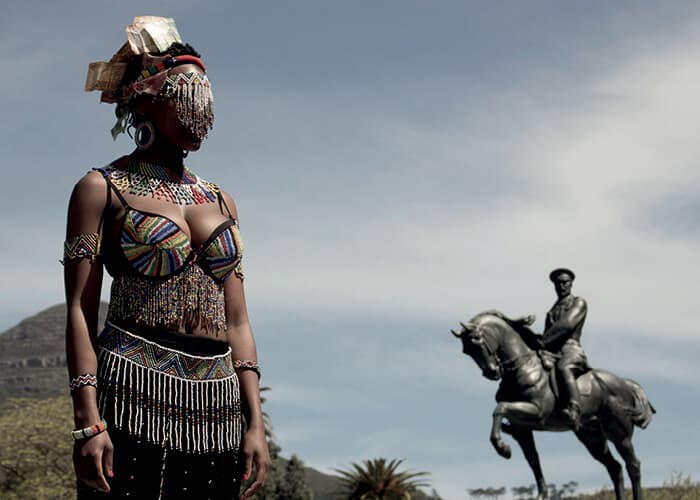 This piece, however, focuses upon the university system and the role therein assumed by the visual arts as an agent of change. Two exhibitions in particular assume centre stage: ‘#theopening’ curated by Justin Davy at Greatmore Studios (Cape Town) and the aborted Rhodes Must Fall photographic retrospective at the University of Cape Town’s (UCT) African Studies Centre curated by Wandile Kasibe.

Neither exhibition can be appraised without a further consideration of the controversial looting and burning of paintings at UCT’s Upper Campus, which predated these exhibitions, as well as the Cape Town Art Fair, the most striking instance of the liberalisation of Africa’s art market. 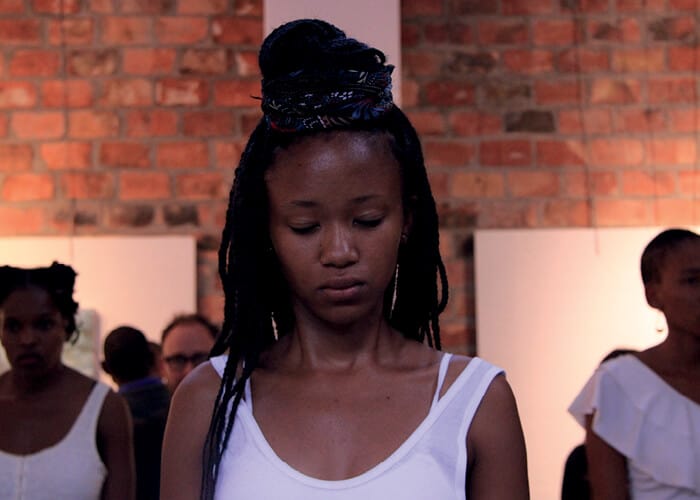 Largely oblivious to, or uncomfortably at odds with, the aims and objectives of the Rhodes Must Fall movement – despite the concession made to local concerns and community arts initiatives – the Cape Town Art Fair stands as an uncomfortable reminder that the art market is central to another hijack and capture: the absorption and fetishisation of the struggle narrative within a global imaginary.

That said, one work exhibited at the fair stood out as an unnervingly disturbing riposte to the absorption of African art in a global liberal economy, namely Simphiwe Ndzube’s mixed media work entitled Us and Them, the Killer of the World. Amidst the glitz and glam and the insouciant coolness of the general mood of the fair, this work – winner of the 2015 Michaelis Prize – was none other than the marker for the psychic discordance at the root of the black youth struggle. 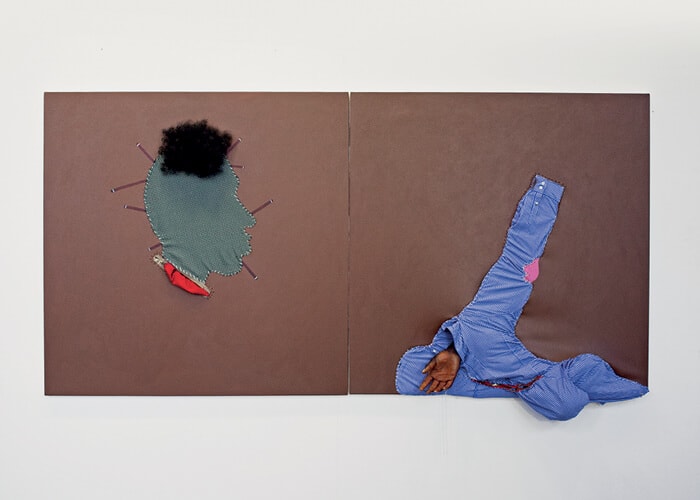 At its vortex we find an eerily realistic black hand emerging in reverse from the buttoned arm of a blue shirt. Literally breaking free from the two-dimensional picture plane, the hand is at once accid and beckoning, its energy as invasive as it is passive. Little else distracts one from this graphic insinuation into the viewer’s psyche; the hand, a metonymic force- eld, drawing us into the very maw of pain and unsettlement which de nes the political struggle today.

That Justin Davy should choose another work by Ndzube for his more stridently political show at Greatmore Studios should remind us of the haunting nature of black pain and the ignominy associated with the grotesque neglect of that pain. In this work – another in the series entitled ‘Imithungo yezivubeko’ or ‘Stitches of evidence’ – we see a black hand and forearm thrust up from a mound of brightly coloured clothing adrift on a makeshift raft. 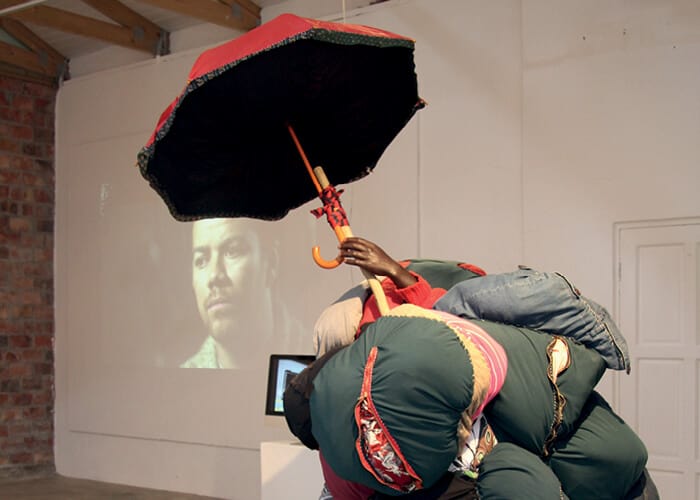 Again, it is the unsettlingly fragmented human detail which aggravates the focus. The hand is holding an umbrella, a rudimentary shelter that echoes the vagrancy at its base. These are hands which are not waving but drowning, hands smothered in the dejecta and waste of discarded clothing.

As one of the homeless gures in Athol Fugard’s play Boesman and Lena notes, “We’re whiteman’s rubbish. That’s why he is so beneukt with us. He can’t get rid of his rubbish. He throws it away, we pick it up. Wear it. Sleep in it. We’re made of it now. His rubbish is people.” Written at the height of the anti-apartheid struggle, Fugard’s words remain corrosively apt, for at the dark root of our liberalised economy there remains the acute sense that black lives remain marginalised, expendable, irrelevant. 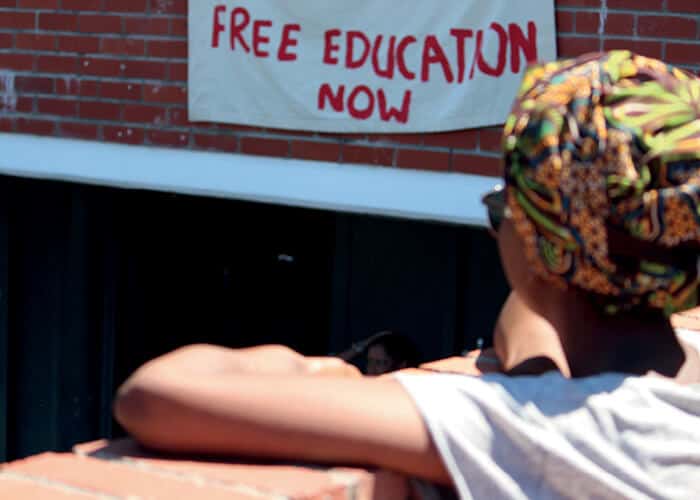 It is for this reason that Biko has asked the black man “to come to himself… pump back life into his empty shell.” Still af icted by what Frantz Fanon, in Black Skins, White Masks, termed the ‘zone of non-being,’ the black struggle and its artistic articulation must perforce return us to this existential absence. If Davy’s show matters profoundly, it is because it is this gnawing absence, this aching awareness of exclusion, this hollowing non-being that lies at the root of ‘#theopening.’

As much the revealing of a wound as it is an inception or new beginning, the exhibition, in keeping with the precepts and drives of Rhodes Must Fall, stands as a reminder that ‘black pain’ and black sovereignty remains the Janus-face of a century-long struggle. These are no mere anarchists mucking about, rather, they are beings driven by their will to power. 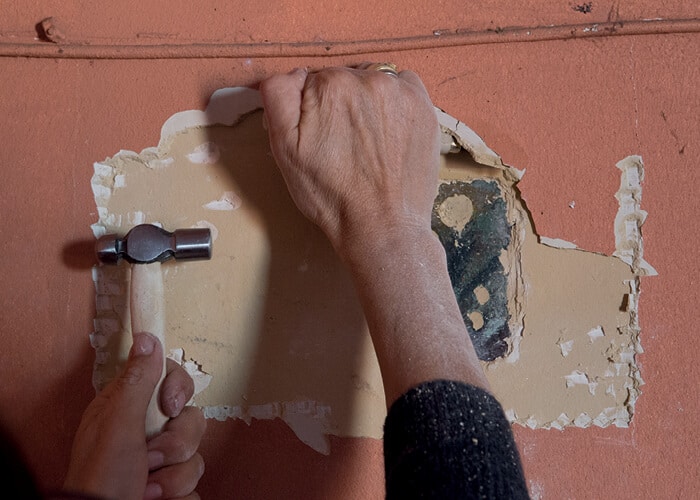 In the arts there is no single dogmatic way in which to reveal this struggle. If Kemang Wa Lehulere gives us an archeological dig by breaking down the painted layers of a township wall to reveal the traces of a hidden beauty, then Ndikhumbule Ngqinambi gives us a painting in which history rolls unerringly and ominously from the gaping maw of a vast tome.

Civil unrest is at the root of all the works, even in Athi-Patra Ruga’s seemingly natural yet garishly radiant video of a lethal hunt. Violence is in the air and it is inescapable. That Wandile Kasibe’s photographic retrospective at UCT was shut down at its very opening because the TransCollective believed that they had been excised from the struggle, or not humanly addressed therein, should further remind us that the war that is currently being waged has many fronts.

History hurts, its articulation today remains unresolved. It is too soon to take stock of a movement which is just over a year in the making, but what its photographic record – along with the works of artists committed to a bitter struggle – reveals is that protest is by no means dead; that art cannot merely be reduced to the aesthetic. For me, the mixed media nightmare embodied by the artist Simphiwe Ndzube is the most toxically powerful instance of this struggle.

Ashraf Jamal is a Cape Town-based cultural analyst, writer and educator. He is the former editor of ARTsouthAFRICA and currently lectures in Film and Media Studies at Cape Peninsula University of Technology (CPUT).

This article was first published in the June 2016 edition of ART AFRICA magazine, ‘The North American Issue.’