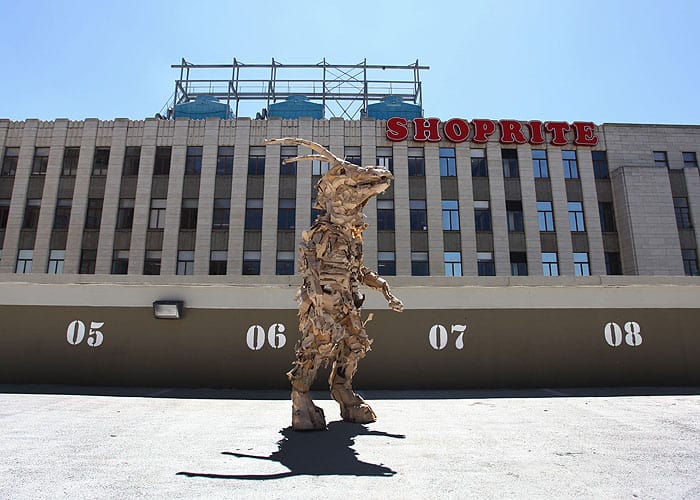 Francios Knoetze, Cape Mongo Paper (2015). Photo by Anton Scholtz.
However you look at it, 2015 has been a curious year so far. Not long after the Red Berets staged their version of Karate Kid in parliament, an understudy to political activist Andile Lili splashed poo on a triumphalist bronze metaphor that, up until recently, lazed on a plinth at an eminent university.
Cape Town artist Francois Knoetze’s response to the bleed of daily news, be it the fall of Cecil John Rhodes or the messy aftermath of Marikana, is to allow it agency in his work. Not that this is immediately apparent when you enter his exhibition, ‘Cape Mongo,’ at Commemoration Church Hall.
At face value, Knoetze, a former Grahamstownian, makes sculptures from the detritus of consumer culture: jam tins, videocassette tape, plastic bottles and cardboard boxes. But Knoetze’s sculptures are more than just static objects you ambulate around; this young protégé of sculptor Jane Alexander occasionally inhabits his grotesque carapaces, using them as body suits for performances, which he also films.
Shown alongside his sculptural suits, Knoetze’s films didn’t quite win me over. His recombinant editing style splices original performance footage with old Hollywood films (Wizard of Oz, Blazing Saddles, Robocop), apartheid-era PR films (about Rhodes, farming and the Cape winelands), children’s animation (He-Man) and TV news (including scenes from Marikana).
The finished product is marked by an undeniable sense of humour, but it is hard to locate the nub of Knoetze’s critique – and he is anxious to land one – in his everything-is-relevant films. Still, their punkish-ness is refreshing.
Like Knoetze, Simon Gush is also interested in labour. Not as it is spoken about at Think!Fest or defined in legislation, but rather its portrayal as a visual image. Gush’s exhibition ‘Nine O’Clock,’ at Fort Selwyn, includes a short film titled I See You (2013). It impressionistically analyses the various public sculptures memorialising the grind of work in his adopted city, Johannesburg.
Gush avoids easy clichés. His aesthetic is cold and reduced, alienating even, yet if you accept it for what it is, as a kind of visual anthropology and storytelling, his work can be strangely rewarding.  His objects and scenarios are portholes to specific moments in the troubled history of labour in this country.
This idea, of the artist as researcher, also informed another show on this year’s very good visual arts programme. Kemang wa Lehulere is the 2015 Standard Bank Young Artist for Visual Art. His exhibition ‘History will Break your Heart’ is extraordinary; it could also just break your heart if you give it the time.
The show is a continuation of his small-scale acts of rediscovery and celebration of black history. Earlier this year he presented a show in Cape Town that paid tribute to writer Nat Nakasa. Here, in Grahamstown, his subjects are the pioneering black painters Ernest Mancoba and Gladys Mgudlandlu, as well as the novelist RRR Dhlomo.
Lehulere’s show includes actual work by both painters. The Mgudlandlu paintings were bought at auction in London from an Israeli collector and were unseen locally for a number of decades. The show pairs Mgudlandlu’s paintings with new chalk drawings by Lehulere’s aunt, who visited the painter’s Gugulethu home as a child. Lehulere’s exhibition is really a special kind of wow.
It is not just South Africa where the news is awkward, weird or just plain worse. Take America, where Eric Garner’s last words (“I can’t breathe”) shattered the myth of post-racialism. Although largely an biographic study of her policeman father, Monique Pelser’s exhibition ‘Conversations with My Father’ gestures towards the ugly images in the media that are associated with men in uniform.
Speaking of men in uniform, art historian Michael Godby’s ‘Battleground’ can look misleading, especially if you only poke your head into the annex of the Albany History Museum hosting this scrupulously researched historical show. Although largely devoted to Charles Bell’s 60 drawings describing the War of the Axe (1846), an important moment in the colonial conquest of the Eastern Cape, this exhibition also includes work by contemporary artists.
Highlights include a 2000 linocut print by Chumani Xonxa memorialising fallen Xhosa warriors and a 2013 tapestry by Athi-Patra Ruga, this year’s Standard Bank Young Artist for Performance Art. Look out also for a black-and-white photomontage by Francki Burger. Taken earlier this year and titled Battle of Gwanga, the photo shows a landscape where a key moment in the War of the Axe played out. The land remembers nothing. It is an arresting statement on art’s purpose and failures.
Sean O’Toole is a renowned Cape Town-based journalist and writer and a former editor of ARTsouthAFRICA.