VOICES FROM THE eARTh

We have to talk about… Climate change

“Today we are faced with a challenge that calls for a shift in our thinking, so that humanity stops threatening its life-support system. We are called to assist the Earth to heal her wounds and, in the process, heal our own – indeed, to embrace the whole of creation in all its diversity, beauty and wonder. Recognising that sustainable development, democracy and peace are indivisible is an idea whose time has come.”

We have seen the signs: the scientific evidence is overwhelming, with studies supporting the concept of human-caused climate change, and the impact of global warming is already affecting all of us. Sea-level rise and rising land temperatures are resulting in the displacement of people, fuelling conflicts in different regions of the world. The problem is of such huge significance that it appears to be challenging our understanding – the denial of this destruction on an economic and political level is sometimes painful to watch.

Artists have been working with and commenting on societal matters for centuries. Three artists, who find a home in the domain of art activism, were invited for the group exhibition ‘VOICES FROM THE eARTh’ and asked to make work around and reflect on the questions: “What kind of ‘ecology of knowledge’ do we need to cope with the magnitude of the ecological crises and the feelings of fear, anxiety, desperation and sadness that this existential crisis brings with it?” and “How can we fully participate to open up new ways of thinking about climate change and bring them into the public space so that we may spark discussion and dialogue?”.

These questions were posed to the participating artists and they answered as follows. 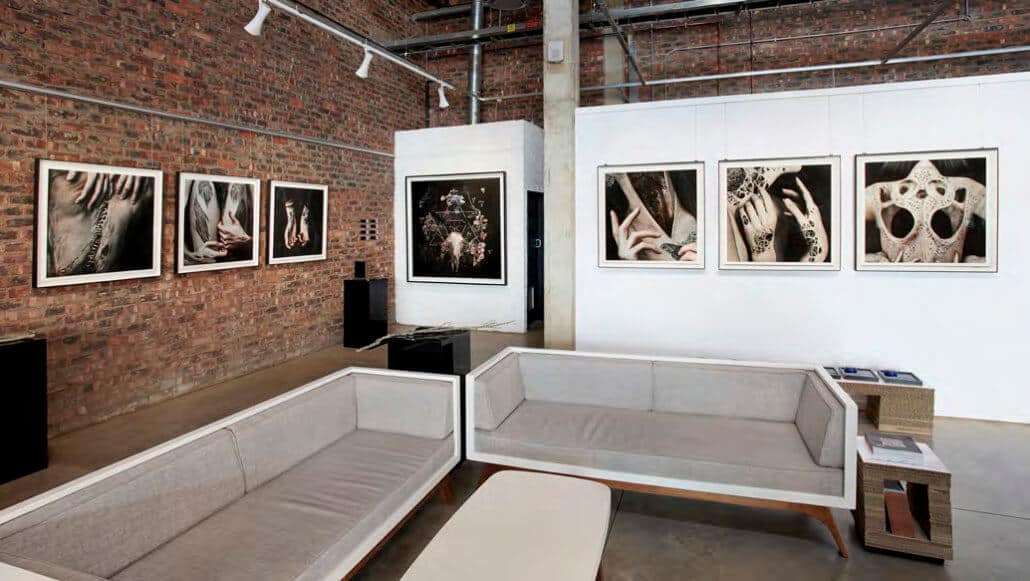 Installation images of Merkaba and hole in your soul. All images courtesy of Berman Contemporary.

“The concepts in my work are driven by a desire to (re)connect humans (including myself) with the Natural World. How can Nature be rendered worthy of moral care and consideration by society when we cannot see its value outside of human consumption or concerns? Consequently, my work engages with the practices of observation, imagination and projection. I explore our current state of liminality to depict a world in flux searching for balance: opposing yet complementary forces pulling at (or rather feeding off) each other… Life vs Death. Light vs Dark. Organic vs Geometric. Biology vs Technology. Order vs Chaos. Fiction vs Reality. To reveal that “Underneath duality there is unity”, as Alan Watts pragmatically described it.

Working with self-portraiture and performance art, for me the inclusion of the human form is often key to creating a bridge between the narrative and the viewer, encouraging an empathic connection with the Earth. The emotionality of the process is a form of catharsis through which I relate fears of a dying world; the female form not only a symbol of life, but simultaneously the personification of the Earth herself.” 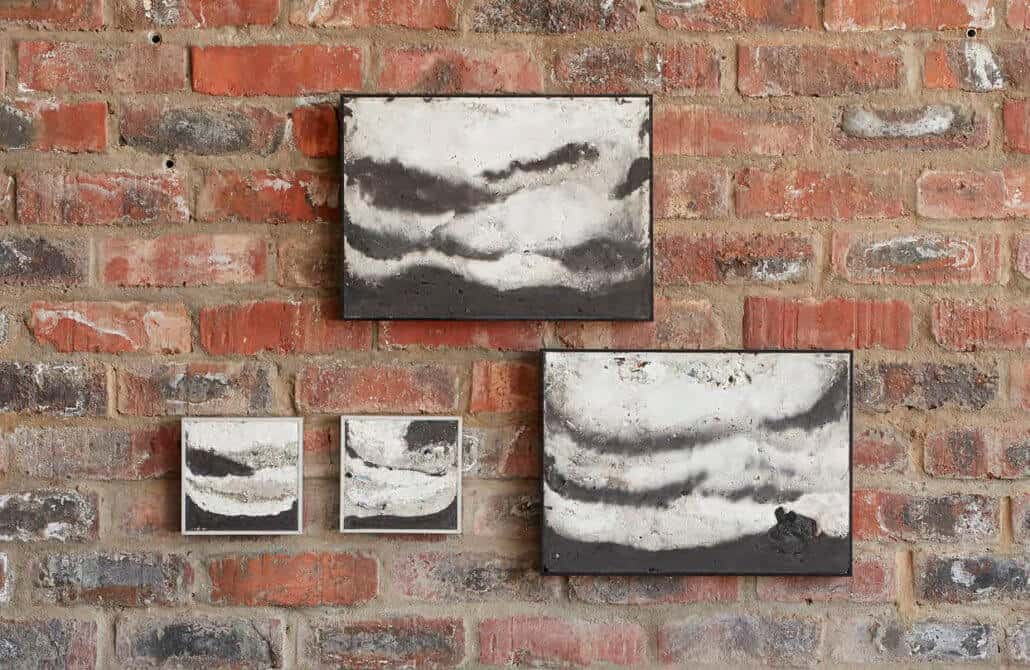 “More and more, we are discovering that even the smallest microscopic organisms or compounds or minerals in the earth – the things we cannot see or touch – are crucial for a healthy globe. Not confronted by these tiny organisms, invisible to the eye, or minerals hidden far below the surface of the earth, we tend to overlook their importance. We are discovering that what we do on and in our world affects other living creatures, but ultimately affects us in ways that we are unable to control. What is the link between us as humans and phytoplankton organisms that live in the ocean? They have been sinking in the carbon dioxide that we produce for years, cleaning up after us. The coal that is burned for energy use, specifically in South Africa, produces an abundance of carbon dioxide, too much for the oceans to absorb, turning them acidic. This process depletes the oceans of calcium carbonate, which is needed for shell production. The shells of some organisms are already being affected by this acidification. They sit at the bottom of the food chain.

In my series ‘Opencast’, the title not only refers to the method of coal mining in South Africa, but also to my method of working. I cast the materials from the back into an open frame, not knowing what the final outcome will be until I release the work from its mould. This uncertainty also references the uncertainty that we face, not knowing how the effects of climate change will ultimately affect us as humans. Juxtaposing unfamiliar materials alongside each other allows one to compare and visualise them together. The compounds are packed hard against one another, forming layers and sometimes cracks between these layers, the materials unable to bind together.” 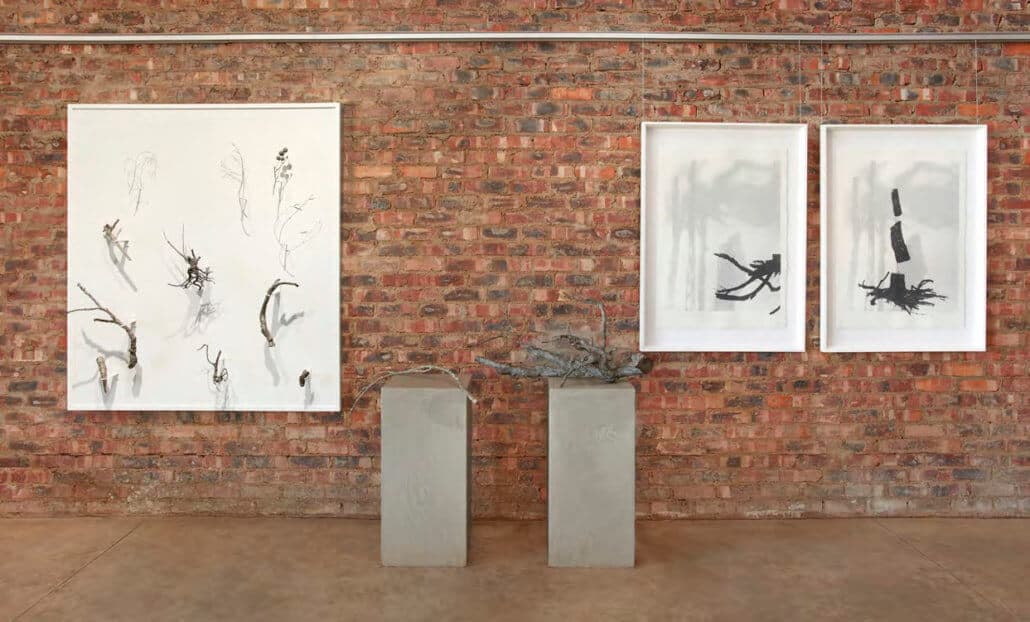 “In a time of deepening ecological crisis, it may be easy to see my work as only a literal reference to the pressures placed on ecology by the current Anthropocene era, but my work does also address the dismay I felt during my research at how recent our collective knowledge about the functioning of forests is and how much damage has already been done globally to forests and ecosystems.

I use variations of the shadow image throughout my work – and the shadow’s connotations of insubstantiality, absence, the negative, the sombre, the idea of obstruction, the blinkered view, darkness and the mirage, illuminate how work using this kind of imagery also speaks about our difficult personal journeys. Shadows, in general, are interpreted as analogues or metaphors. I often use shadows in layers, combining them with reflections, and I believe that my working in this way is, in fact, a kind of re-thinking: reflecting on and reinterpreting the world, layer by layer, idea by idea, encounter by encounter.”

‘VOICES FROM THE eARTH’ was curated by Els van Mourik and was on view at Berman Contemporary, Johannesburg, South Africa, from the 3rd until the 17th of November 2019.