Voodoo Past and Present

In July 2016 the Republic of Benin asked that France give back 5000 objects. In the palaces of Abomey, the ancient capital of the Danhomè Kingdom, the rooms are empty. Most of the vestiges of the reign of the kings are visible today at the Quai Branly-Jacques Chirac museum in Paris, while copies sculpted from photographs of the originals are displayed in Abomey. The contrast is breathtaking and the symbol is strong. Nonetheless, all was not acquired in bad faith, or seized during the conquest of the Danhomè Kingdom at the end of the 19th century, and the list of required objects is still to be established. 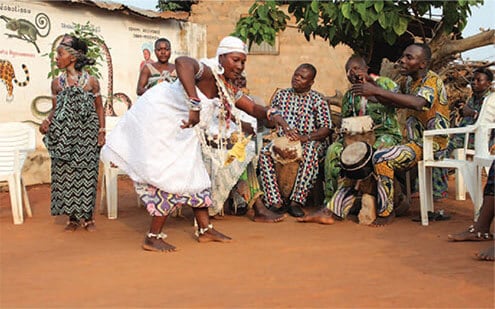 Let’s remember that 70% of the objects that were taken away from the continent, and that are in Europe and the U.S.A. today, left the African soil – mostly illegally1 – right after the independences. Their circulation is, therefore, essentially linked to the art market, and one cannot ascribe it to colonial history alone.

Nevertheless, the imbalance between the “richness” of the European museums and the “poorness” of the African museums is striking. In the height of the stakes of recognition and repairs, culture plays a key role. In the case of the objects concerned here, some captured the imagination of 20th centuryavant-gardes European artists; the “Oiseau du Benin” (Bird of Benin) being one of those. Today their expressive power as well as their connection to voodoo continues to inspire Benin artists.

Seized as spoils of war during the conquest of the Kingdom of Danhomè in 1894, some of the objects today exhibited in the Quai Branly-Jacques Chirac museum were first brought to the Trocadéro Museum of Ethnography. Guillaume Apollinaire visited the collection and wrote: here are a few prime art pieces and particularly that pearl in the Danhomè collection: the tall iron statue representing the War God, which is undoubtedly the most unpredictable work of art and one of the most gracious pieces that one can see in Paris. 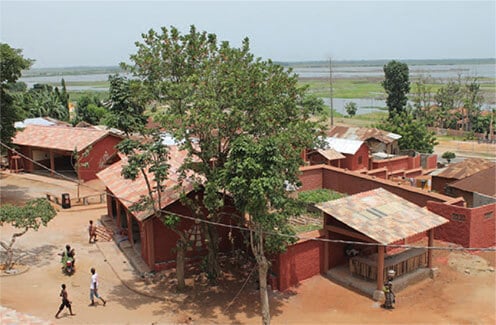 The poet was stricken by the work of AkatiEkplékendo3 dedicated to Ogou, because of its strangeness and the fact that it went against the naturalist’s canons of the time: the human figure has certainly inspired that singular piece. And yet, none of the elements that it is composed of (…) look like a detail of the human body.4 Picasso would most certainly be inspired by it right after the Second World War; he who had seen it in museum halls and possessed a photograph of it sent to him by Michel Leiris, on his request. Incarnating a form of disillusioned, strange and worrying primitivism, The girl with the rope (Picasso, 1950) was made like the power objects linked to voodoo, by adding elements borrowed from the real world, by accumulating collected objects: a wicker basket for the belly; a saucer for the head; some cut-up cardboard for the headpiece; women’s shoes for the feet, and that rough and damaged material, which contrasts with the impassiveness of the fixed face just like a mask, as in the oeuvre of Akati Ekplékendo.

This has got nothing to do with the primitivist experiments of the year 1907, when Africa was convened as a form of exorcism. Le Corbusier, the architect, was also amazed by what he called the tall guy (art negre) and he sketched it during his visits to the museum in 1908. Next to the Gou figure, featured the statues of King Guézo (1851-1858), Glélé (1858-1889) and Béhanzin (1845- 1906), represented as anthropo-zoomorphic characters of which he also madevarious sketches in 1926. ‘These museum pieces are such good schools’,5 wrote Le Corbusier in 1924. Compulsory transition, rite of passage, visiting the pantheons of culture formed a part of the artist’s learning. And contrary to all that we associate with African arts, the objects that caught their attention were not only the small wooden statues but also the monumental works in iron and polychrome wood from Danhomè. In this regard, it is not surprising that the metal sculpture from Dahomè representing a bird devouring a fish in Guillaume Apollinaire’s collections, had not attracted much attention up to now.6 It is nevertheless central in the history of primitivism and modern art, since it might have inspired the name, ‘l’Oiseau du Bénin’ given by Apollinaire to Picasso, in his autobiographical text, Le poète assassiné (1916). In the 1910s, the Republic of Benin did not exist;7 the name referred to the neighbouring Kingdom of Benin, situated in Nigeria, known for its splendour and its power. To  this day the two entities are often mixed up,8 but the sculpture actually came from the Republic of Benin, or Danhomè at the time.

So why call Picasso “the Bird of Benin”? In the French language, several expressions use the word, ‘bird’, to designate an atypical, marginal, or strange character: “un drôle d’oiseau”. The term may also have sexual connotations, which probably suited Picasso just fine. Next to ‘Benin’ the term acquires an exotic dimension that could refer to the artist’s interest in African arts; an interest here associated with a warrior and conquering kingdom, rich with artistic productions made with precious materials such as bronze and ivory. This foresight was after all, contradictory to the expectations and pre-conceived ideas of Africa by the Westerners of that time, ideas that were more akin to the primitive and barbarous. Picasso would be that strange bird. Coming from elsewhere, and playing out of tune, he would be associated with the strength and traditionof an exotic kingdom, devouring the sources of its inspiration like that bird from Danhomè, grabbing the fish that it holds in its bill. On each side of the bird are two serpents – erected and twisted, nervous and menacing – whose movement comes to disturb the plenitude incarnated by the bird, and adds an aggressive dynamic to the whole. Guillaume Apollinaire was one of the people who used to supply works of art to Picasso. For instance, he put him in touch with the art dealer, Paul Guillaume, who sold several sculptures to him, and also with his secretary, Géry Piéret, who stole the Etruscan sculptures in the Louvre Museum, which inspired Picasso in Les Demoiselles d’Avignon.

The sources of the painter and sculptor were multiple, amongst them the art of Danhomè, connected in his contemporaries’ spirit with the violence of the colonial conquests, and an imaginary vision of a mystical, savage and eroticised Africa.9 What is it that became of the symbolic and aesthetic force of those objects today? In the country that saw them dawn but from which they are now absent, what do these works embody for the Beninese artists?

Many of them reproduced them: Simonet, Théodore Dakpogan or, more recently, Zount, made figures of Gou inspired by Akati Ekplékendo’s homage to the divinity of iron, creation, war and technology. These sculptures are also nods to the ‘“Gou” of the white people’,10 to an oeuvre, which peregrinations and multiple associations11 have erected it to the rank of masterpiece and have allowed it to be exposed in the Louvre since 2000. These productions are part of a larger context of references made to voodoo in the art of contemporary Benin; indeed, there are many artists finding inspiration in the objects, beliefs, and strengths of voodoo.

Sometimes on the mode of illustration and homage, this is demonstrated on the walls of the temples around which certain public squares were built in Porto Novo, or in Abomey. Cyprien Toukoudagba was one of the first to establish such connection with the gods in the palaces of Abomey and in the 1990s, with the authorisation given to the voodoo-cult, after years of interdiction under the Marxist-Leninist regime, the decorated façades multiplied. The Ouadada Cultural Centre in Porto Novo, managed by Gérard Bassalé, has since 2012 organised a Contemporary Art Festival in parallel with the renovation of the voodoo places in Porto Novo, and in the context of the festival, artists are invited to decorate, question and illustrate within the framework of the voodoo deities.12 In a more distanced register, artists like Dominique Zinkpé and Romuald Hazoumé make reference to voodoo philosophy in their paintings and sculptures, while Gérard Quénum uses the expressive force of the bocios13 in his installations. It would nevertheless be absurd to see in those works the reenactment of a voodoo cult. The literal expectation of Westerners with all things coming from Africa, brings about such misunderstandings and makes it possible to display Quénum’s pieces next to objects connected to voodoo in Ethnographic museums, carrying on the long history of misunderstandings between Africa and the West. In the 2012 sculpture reproduced here, a couple of bocio are present, next to a cut-off dirty Barbie head, damaged, eaten into by wear and tear by street waste, where it comes from. Two sculptures on wood and a plastic head. The presence of the symbol of two distinct cults – a religious cult and a consumerist one – are not here to honour voodoo but rather to question the links between Europe and Africa, to open the trapdoor of misunderstandings and to interrogate their circulations.

Maureen Murphy is Associate Professor of Art History at the University of Paris 1 Panthéon Sorbonne. She is the author of De l’imaginaireau musée. Lesarts d’Afrique à New York (1931-2006). Dijon : Les Presses du réel, 2009. Her current research focuses on cosmopolitan modernism, contemporary art in Africa, the history of primitivism and the politics of exhibitions.

This text was translated from French by Patty Taljaard.