In Samuel Beckett’s renowned play Waiting for Godot, Estragon claims that “we always find something to give us the impression we exist.” Written between 1948 and 1949, the play invites social, political and religious interpretations, and undoubtedly speaks of a collective existentialism that undoubtedly existed in the west, post WWII.

Some seventy years on, and it could be argued that there remains a global confusion in our social, political and religious spheres. Donald Trump continues to play the part of a dangerous buffoon in his role as 45th President of the United States, the scorching of Grenfell Tower in London has become a cypher for all the ills that afflict the United Kingdom and the west, Syria still burns, and in South Africa – amidst a dire drought – fears mount at the ever-increasing risk of state capture.

In an attempt at making-sense of these multiple and numerous ills of contemporary society, Sarah Biggs’ solo show ‘Waiting for Rain’ – exhibited at the Barnard Gallery in Cape Town – addressed the idea that we always find something to give us the impression we exist. 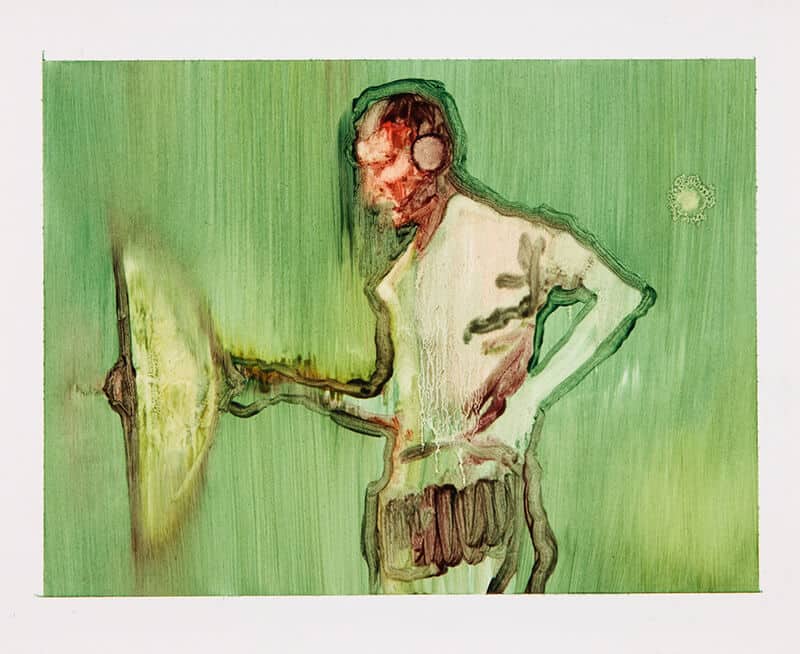 Made up entirely of painted works, ‘Waiting for Rain’ saw a complex dance play out between two enduring partners – that of chaos and the relentless belief in meaning and logic. The medium itself expresses this tension – the paint allows the surface to constantly move, always forming and becoming as pigments seep and meet each other, expanding like gases and exploding like gunpowder. These are landscapes evocative of a place that may, or may not, exist.

The figures in her work also capture the crisis of existence – they are almost always in a state of listening, searching, waiting – and look longingly into the distance, hoping for a meaning that, like Godot, might not ever arrive.

Particularly evident in her work The Smell of Thunder, a figure seemingly clasps his hands together and gazes up into the distance. Encompassed by a sky of oil paint, he searches longingly for some sense of purpose – existing in a universe quite abstract, all the while remaining patient for an answer.

This longing is reflected throughout the exhibition, multiple abstracted figures dissolve into their abstracted landscapes, resisting delineation between subject and context, and establishing a lack of stability within the social, political and religious spheres. Biggs has successfully taken something quite figurative, and shifted it back into something quite abstract – often not letting it go into pure abstraction, but seeking the abstract and painterly in nature, where nature proves as a source of abstraction itself. 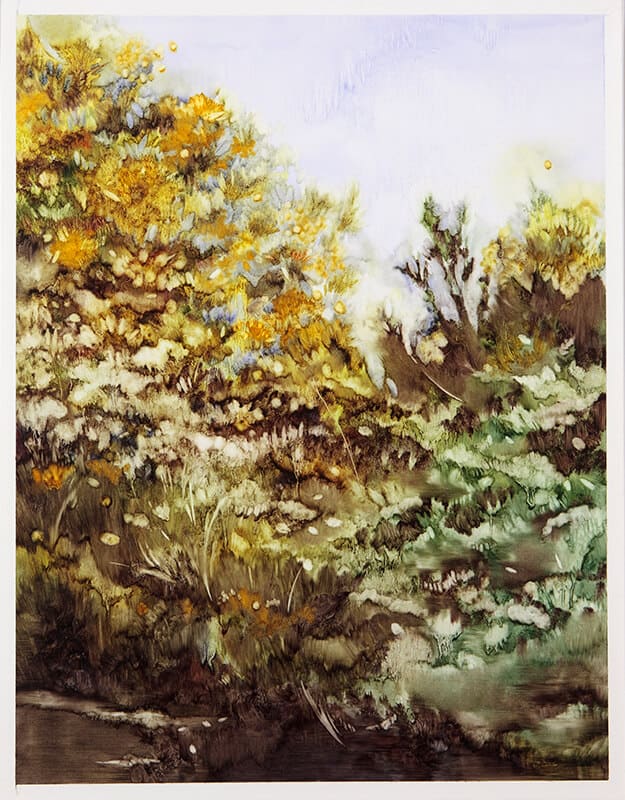 Biggs’ paper works also reflect the notions of chaos, meaning and existentialism. Their intense mark-making sees layers of paint simultaneously applied and removed – brushstrokes feverish with the turmoil of an existence perpetually in question.

In opposition to the intensity of Biggs’ paper works, her large oil on linen works present us with an almost physical opportunity to step into the abstracted scape. Perhaps an invitation for us to join in the search for meaning amidst all the chaos of the world, these paintings offer a greater sense of tranquility than their intense paper counterparts – a sort of acceptance of Godot’s failure to arrive.

In Sunshower, this contentment radiates from within the painting. It provides a refreshing and reassuring alternative to the chaos that so powerfully emanates from a large majority of work in the exhibition, pronounced by the vast panes of glass that allow the sun to bathe Barnard in a sea of light. Whilst Biggs’ work addresses both existentialism and the social and political turmoil of contemporary society, it also – more literally – addresses the current water crisis the Western Cape is facing.

With the average water level of dams across the Western Cape at only 27.3%, and only 64 days of water left – Cape Town is quite literally waiting for rain. For Biggs, rain is a powerful force – physically, symbolically, and in its absence, and she hopes that Waiting for Rain speaks of some interaction and connection between humans and their broader environment. When viewing Biggs’ work, perhaps we will realise the severity of our water scarcity.

Akin to Beckett’s Waiting for Godot, Sarah Biggs has presented her audience with a broad range of images that question our existence. Although a search for meaning may seem like a challenging and somewhat negative topic, Biggs has beautifully captured the many aspects it considers, and leaves her viewers content with the possibility of there never existing meaning, yet remaining hopeful that it may still come along.

Ellen Agnew is a staff writer for ART AFRICA.