‘Ways of Seeing’: Claude Chandler on Identity and Consumption

in News Articles 2013
Share on facebook
Share on twitter
Share on email
Share on whatsapp
Claude Chandler’s latest show, ‘Ways of Seeing’ (set to open in August 2016) bears a strong resemblance to the work he began with his solo exhibition ‘Binary Transcendence’ that took place at Worldart gallery in Cape Town in August 2015. Dabbling in the intangible realm of binary code and attempting to manifest through paint the digital lives we weave for ourselves daily, Chandler’s work explores the nature of creating identities, as well as the visual consumption of – the ‘ways of seeing’ – these identities that are simultaneously true and untrue. 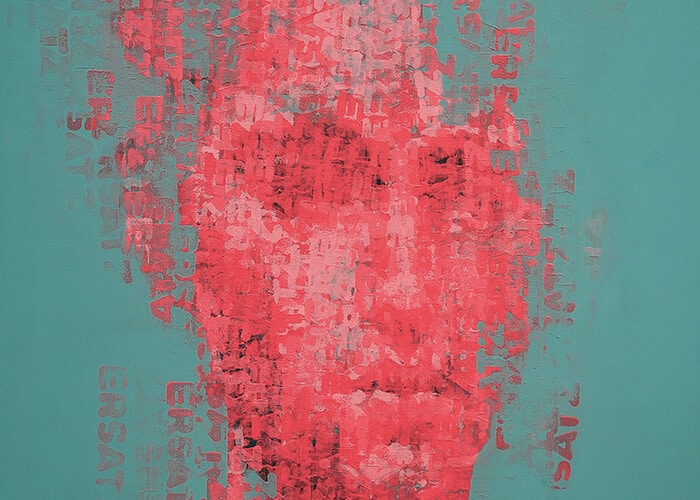 Claude Chandler, detail of Ersatz, 2015. Acrylic on canvas, 150 x 100 cm. All images courtesy of Worldart, Cape Town.
ART AFRICA: Your work has been described as ‘pop-urban’ or ‘urban-pop,’ what does that label mean to you and do you identify with it?
Claude Chandler: I definitely identify with the label ‘popurban.’ When I hear the word ‘pop,’ ideas such as mass production, repetition and advertising come to mind. These terms manifest in my painting process. My brush is the ‘stamp,’ and the formula used to create the portrait has an industrial method to it. The constant repetition of a word takes on a mass production quality until all the printing or stamping forms an image. My work has often revolved around social network platforms and the online persona, and in many ways this involves advertising and plastic realities. Qualities of the ‘urban’ do resonate in my work: the stamping process can reflect construction and mechanisation. A graffiti aspect also emerges, in the use of colour and in the sense that words are read as images.
Your practice involves using binary code to create portraits and you’ve said that “in its primal core, all internet information and imagery is nothing more than 1s and 0s (binary code). Digital media in reality is a sort of magic…” How did you come to use binary code as a ‘medium’?
My technique has been described as reminiscent of binary code. When constructing the portrait, the conventional process of paintbrush to canvas is eliminated. I make a stamp by using foam letter cut-outs and then assemble a name or word which has some connection with my subject. I continuously stamp and layer the print to form a face. The process might seem mechanical, however the formation of the image is actually very organic because I cannot dictate exactly how the stamps form the portrait. When the image finally emerges, it’s transformed in a coded and industrialised web of paint.
My ‘trademark’ stamp style was a mutation of techniques I had been experimenting with over the years. Despite being trained as a traditional painter, I always loved the idea of industrialising the painting process and using mechanical tools. I experimented with window squeegees, Lego, printing and various other tools and methods to apply paint to canvas. In 2010 I took part in a group show titled ‘Online,’ for which I combined my love of computers (coding) and industrial paint application – resulting in the use of stamps reading 1s and 0s (binary code) as the main tool in constructing my painting. The idea of using binary code to create paintings grew from there, and later on I began to use letters and words. 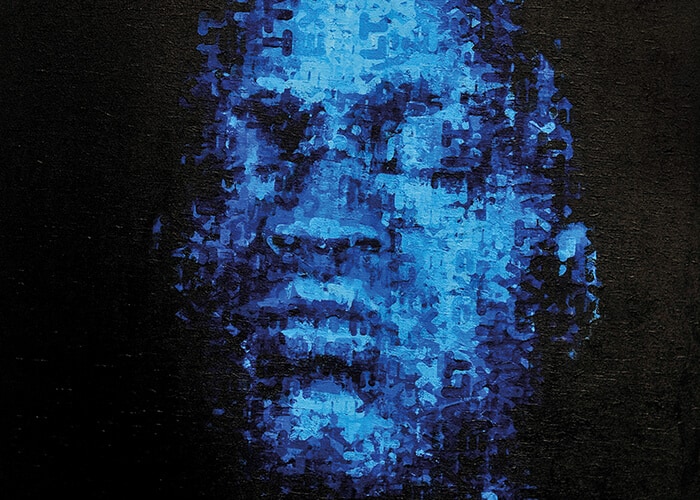 Claude Chandler, detail of Exalt 1, 2015. Acrylic on canvas, 150 x 100 cm.
What is it about portraiture that appeals to you?
Portraiture is the cornerstone of my creative journey. I started my art career with portraiture in 2005. It enabled me to grow and branch out as an artist over the years. The subject keeps me focused, motivated and confident. Portraiture has also played a prominent role throughout the history and evolution of art. I enjoy it as a means to engage with modern dialogue, after all, portraiture has gone through a huge metamorphosis with the ‘selfie’ phenomenon and social media, making it an important topic when discussing new ways in which people see each other.
In your artist statement you say your process is “to modernise the traditional portrait by mechanically etching it into text. The digitised rendition transforms and re-invents the subject.” What is the relationship between image and text in your work? In what way is the subject ‘re-invented’?
Technology has enabled us to constantly take photos of ourselves. This mass reproduction of oneself has transformed the humble portrait into a brand. This concept is related to the functions of advertising (and pop art). Repetition is a device often used in advertising and, especially in the digital realm, has transformed the function of an image. The portrait has mutated into a product of lifestyle and desire. My technique exaggerates this emphasis on repetition – it is the key process to my painting style, the mass duplication of a word to form a 2D image.
The word itself is also important. Being repeatedly bombarded by the word alters the way you perceive the image (as well as the word). By stamping the word in multiple layers it becomes distorted and, in a way, loses its meaning. 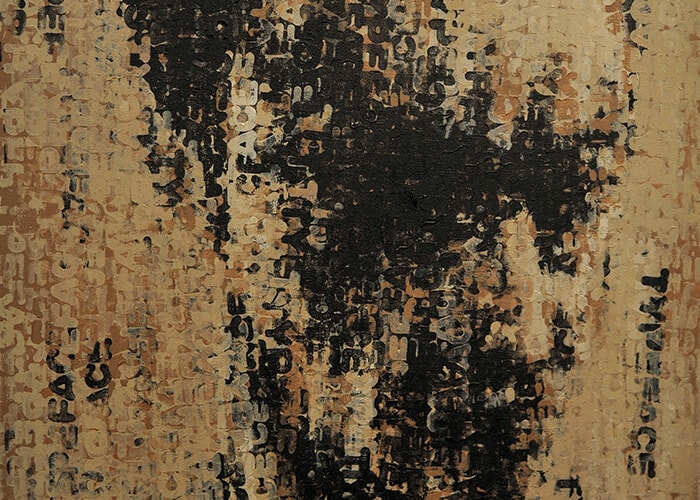 Claude Chandler, detail of Typeface, 2015. Acrylic on canvas, 150 x 100 cm.
You have listed Chuck Close and Francis Bacon as major influences on your work. Can you tell us more about how they have influenced your work?
Chuck Close is a key influence of mine. As I mentioned, I am very interested in the industrialisation of the painting process, which Close has almost perfected. His pixilated interpretation of images resonates with what I strive to achieve. I find that with portraiture, scale also plays an important role. Making use of a large canvas elevates the subject from being a mere study. Francis Bacon is also a guilty pleasure (like real bacon). The fascination is definitely connected to the way he handles flesh, and how he transforms it. In my practice I also attempt to transform the flesh and to elevate and focus the subject.
Please tell us more about Untitled studios, how does working with and around other creative people affect your practice?
Untitled is a creative collective. It consists of seven semi-private studio spaces occupied by different artists. About every three months we hold small exhibitions curated by the resident artists or guest curators. Most importantly, I think, working at a studio allows an artist (or any other creative) to create work-life balance. It allows one to set working hours and a routine. To be disciplined, focused and just work, is a winning formula. Chuck Close once said, “Inspiration is for amateurs, the rest of us show up and get to work.” I really enjoy working with other artists. They can either be a fresh pair of eyes or the harsh critic you need to plant you back on earth. We motivate and push one another and are there to pat each other on the back when magic is achieved. 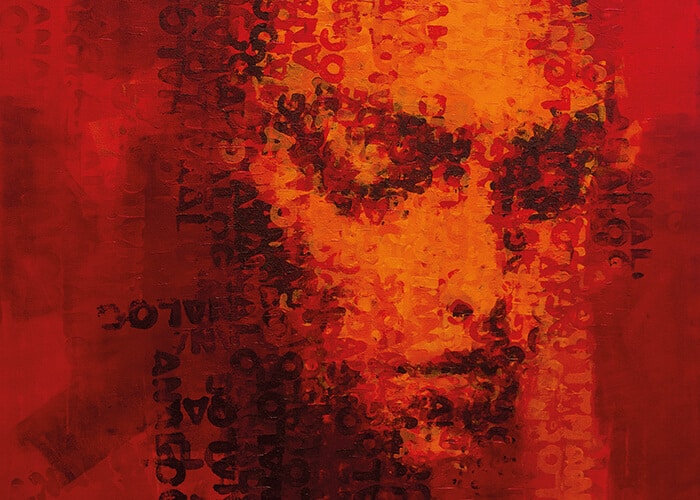 Claude Chandler, detail of Analog, 2015. Acrylic on canvas, 150 x 100 cm.
Your upcoming exhibition (at Worldart Gallery in Cape Town) ‘Ways of Seeing’ is a “re-imagination of the digital world.” How does your portraiture ‘reimagine the digital world’?
The title for this exhibition refers to John Berger’s 1970s BBC series Ways of Seeing.
While watching the series, I realised that many of the ideas presented by Berger could be linked to the digital and virtual ‘ways in which we see’ the world today. My work constantly revolves around the theme of digital and virtual experiences. My concern is that the ‘way we see’ and interact with each other today is mostly via the virtual world, through screens. In the exhibition I explore the relationship between the viewer and the subject. I’m trying to mimic the same interaction a viewer would have while looking at an individual on a social media page through a computer screen. It can be interpreted as spying or voyeurism but it isn’t, because we present ourselves virtually specifically to be looked at. We create certain ‘looks’ for ourselves on social media; we plan how we want the world to see us.
In this solo show I literally interpret the title, by exploring different ‘ways of seeing.’ There are so many different synonyms just for the word ‘see.’ Every synonym refers to a slightly different, nuanced ‘way of seeing.’ ‘Look,’ ‘glance,’ ‘stare,’ ‘glare’ and ‘gaze’ are all ‘ways of seeing,’ but each pertains to a completely different set of situations, emotions and interactions. In my new body of work, I use a few of these words to describe a certain ‘way of seeing.’ I am exploring one branch of the theme of digital and virtual experiences that my work generally revolves around.
And finally, where to from here? What can we look forward to seeing from you in the future?
I am very excited to be moving to East Side Studios in Woodstock and will be working among artists such as Vanessa Berlein, Kilmany-Jo Liversage and Frans Smit, all artists whom I greatly admire and respect.
I’m hoping to do some overseas traveling, and possibly a residency. Other than that you will find me working and pushing myself in the studio, continuing to explore different aspects of the themes I have been working with so far. I plan to (hopefully) take part in far more exhibitions and art fairs next year.
‘Ways of Seeing’ will run from the 4th – 26th August 2016 at Worldart, Cape Town.