We Buried Us: Exploring the Use of Anger & Discontent Through Creativity

Anger is fashionable all over the world. There is so much of it around that it feels dangerous. In the face of growing privatisation of power with the nation responding to the disregard of rights for the citizen with gallows humour, one would think Zimbabweans have no capacity for anger or rage. 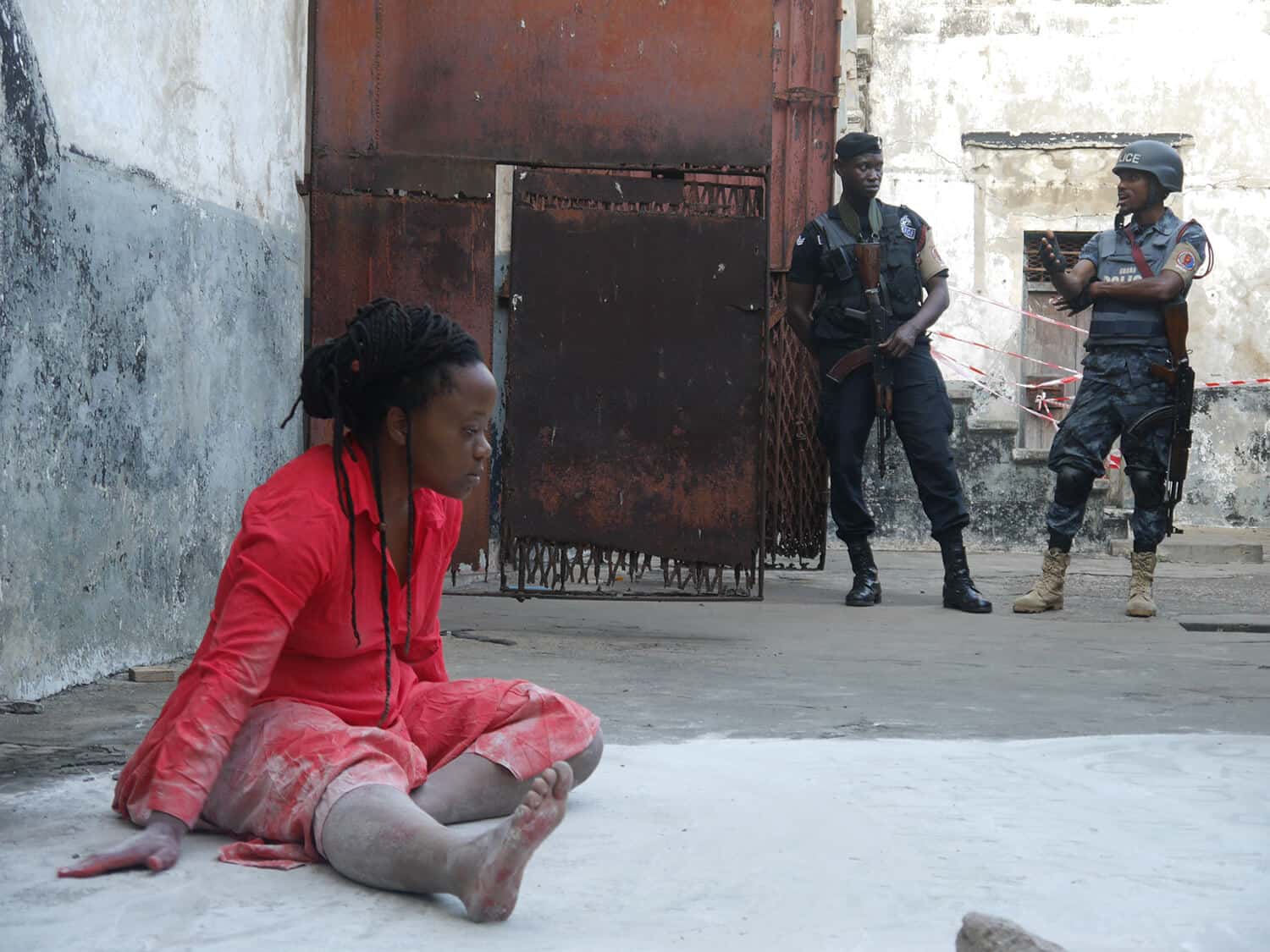 Kresiah Mukwazhi, Blood on my Hands, 2018. Courtesy of the artist.

Central to our conception and experiences of anger has always been the resentment we have felt for decades for not being able to express our displeasure like we used to. We have never been people who are angry quietly. Anger has always been about shaming too, hence the gallows humour. Angering our Njuzu1 meant the person might not return thus appeasement has always been our thing too for things that we say are divine. Appeasement has also been used in terms of leadership and a whole party of people to say vanhu vakashagwa namwari2, and there is nothing about them that is Christian and, their behaviour has nothing to do with the respect of the ancestors. But we have our little rebellions. The kind of protest that happens here is different from everywhere else. We carve our niches and quietly resist.

The language of the political and social is a language of war that addresses issues of discontent with a heavy hand. When Super Patriots and Morons3 were banned in 2004 by the censorship board and subsequent such actions, we did not need to be told what not to do. We made up the rules ourselves and negotiated ourselves into what we thought we needed to do to survive. The clampdown reminded artists that they were not immune to what was happening to journalists and activists. So everyone put their heads down, and we got about the business of living. And we whispered our displeasure. ‘They buried us under4’, and then we went too far in suppressing our anger.

ANGER AS A CLEANSING FORCE 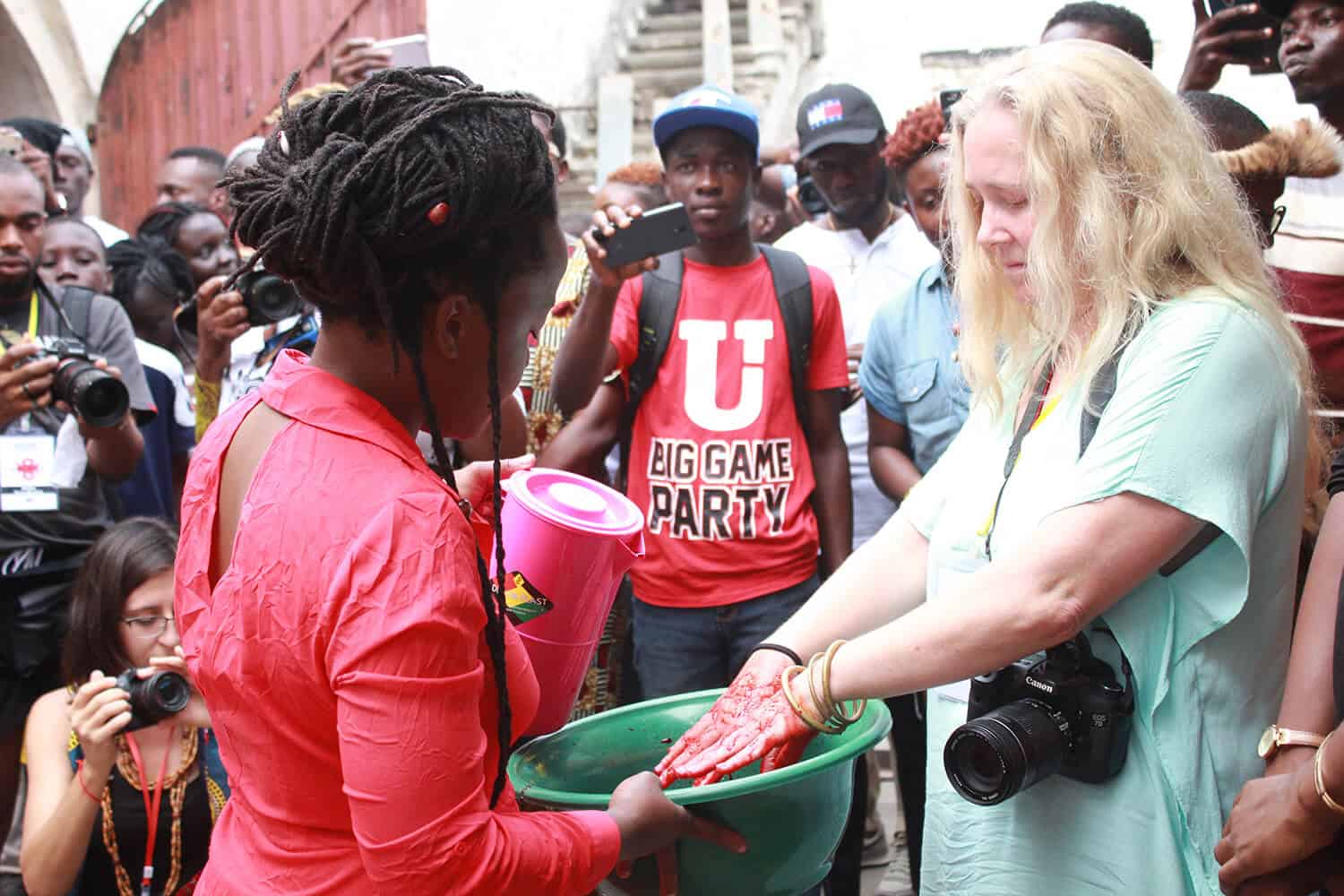 Kresiah Mukwazhi, Blood on my Hands, 2018. Courtesy of the artist.

We need the fierceness of anger to protect ourselves if we have been violated, disrespected or abused. We shield ourselves on our way towards cleansing ourselves. Making art as a response to injustice, Kresiah Mukwazhi has created pieces of ‘resistance5’. Her work Blood on my hands (2018-) is an interrogation performance where she questions herself and her position regarding the current situation in Zimbabwe. The full spectrum of anger explored here. She performs a cleansing ritual to address the trauma to renew and prepare people for what happens next. We are culpable of what has been happening. The washing of hands with blood inspires notions of guilt, corruption. We are all drenched in blood. The performance lasts for two hours; the movements of the body happen slowly. This metaphor of meditation and anxiety, allows us to watch, think and reflect on the lives lost, the protests and to demonstrate that activism comes at a price.

…you force them to take stock of the ugly bits that we do not want to confront. So we cleanse ourselves, but the demons remain there.

Contrary to the stereotypical angry black woman, there are no furious female subjects in Mukwazhi’s work. Her anger does not consume her. Rarely celebrated or adored as works devoted to love and affection, her artworks are studies in abject aggression but no less profound in their meditation. G Tambo shows Mukwazhi’s critical stance that is partly the result of the artist’s own experience and the found materials often found in her work and how that is endemic of the violence and the failure of a system that has made people angry. By using delicate bra straps, lace and silk, bra cups sourced from second-hand underwear markets, Mukwazhi not only focuses attention once again on the fragility of the female condition in Zimbabwe but also triggers an active debate based on a provocative resistance to patriarchy. It’s not just about politics. You are not supposed to talk about your insides even when they hurt. So when you put things outside that are supposed to be intimate, not only do you make people uncomfortable, but you force them to take stock of the ugly bits that we do not want to confront. So we cleanse ourselves, but the demons remain there.

ANGER AS A TOOL FOR SELF-REFLECTION

We realise how we need to change and the things we need to create to make the world a better place, but often we hide behind the anonymity of social media for our acts of defiance. Twitter and Facebook have become battlegrounds where we vent our anger when we otherwise would not be able to. We forward messages of what makes us angry until we become numb to the horrors of the prejudices that constitute an ulterior level in the interpretation of our everyday reality. BusStop Tv and Magamba tv put up satirical skits, and we laugh. Protesters are jailed and denied bail, and we get angry. We are not sorry. But we often get upset not because of the system but with ourselves. The anger mirrors our frustration and disappointment with our failure to organise and articulate ourselves in a way that is satisfactory to us.

ANGER AS AN ORGANISING FORCE

Everything orbits around the centrifugal force of the juddering fist that is forever about to blow. Gareth Nyandoro’s signature style is enigmatic and metaphorical. Called kuchekacheka, it involves inking and layering paper and then incising the top layer to reveal the colours of the lower sheets. The cutting action is precise and mimics one taking a knife in a fit of rage to a canvas and exposing what lies beneath. The technique developed out of scarcity in the 2000s and the lack led to a wave of simmering anger. Nyandoro takes the concept of the marketplace as his starting point. Focusing on the informal market place, and seemingly mundane everyday people, he turns the spotlight on the people the state has forgotten. This celebration is a practice of counter-history and counter imaging to push back against institutionalised narratives that singularise struggle to make it clear that historical change will always be made by those who are likely to remain anonymous.

The cutting action is precise and mimics one taking a knife in a fit of rage to a canvas and exposing what lies beneath. The technique developed out of scarcity in the 2000s and the lack led to a wave of simmering anger.

Christians equate anger to being possessed by a demon. Rage may not be angelic, but it is human and deserves our acknowledgement. Gareth Nyandoro’s Ihohoho naMadzibaba Ishimairi (2015) shows immediacy and irreverence for particular institutions. This piece addresses the assault of police officers, journalists and members of another church by the Johanne Masowe eChishanu apostolic sect in May of 2016. Nyandoro transfers to canvas the anger of the apostolic faith sect’s encounter with the police at their shrine. The staffs used to hit the policemen are menacing. The revolt is a contradiction in itself; church members exacting fury on authority figures and displaying sinful wrath. 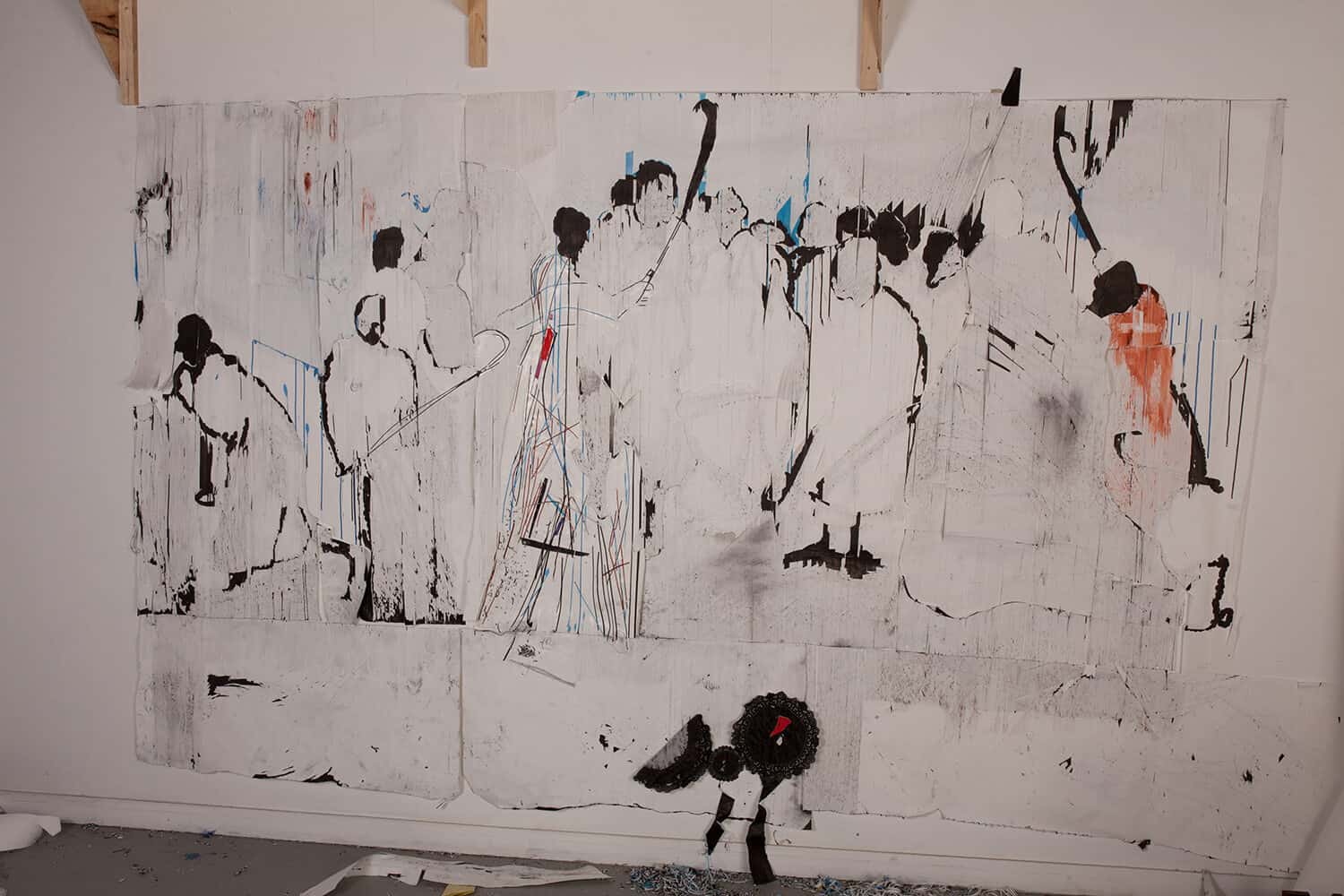 In developing his oeuvre, Nyandoro has been exploring other art forms to address issues of access like the untitled (2016) performance that was never presented6. The work involved a procession of 30 goats with headlamps moving into the usually white sterile space. It would have been revolutionary, a proverbial juddering fist. This performance rooted in the ephemeral and the traditional trade of shepherding goats would have transcended time to create a futuristic concoction of movement, light and sound something his collage work already does. The marketplace has been a site of artistic creation a perpetual treasure hunt for cultural meaning for him but also a tool to express his displeasure at what continues to be an unwelcoming terrain for him.

Portia Zvavahera uses the colour red a lot in her work. Red the colour of anger and celebration; her work is always right there waiting to give us a piece of its mind. There is ever a limited range of human emotions that are acceptable in a context where you are always encouraged to be at war with your psyche, to think of your most natural human urges as being somehow evil. Red itself is key to her womanness. Compositions of the Zvavahera iconography of the body engaged in cultural and religious rituals are unsettling, visceral and non-mediated. Individual and communal celebrations reflect a blend of indigenous Zimbabwean beliefs and Christian faith that are always at war. 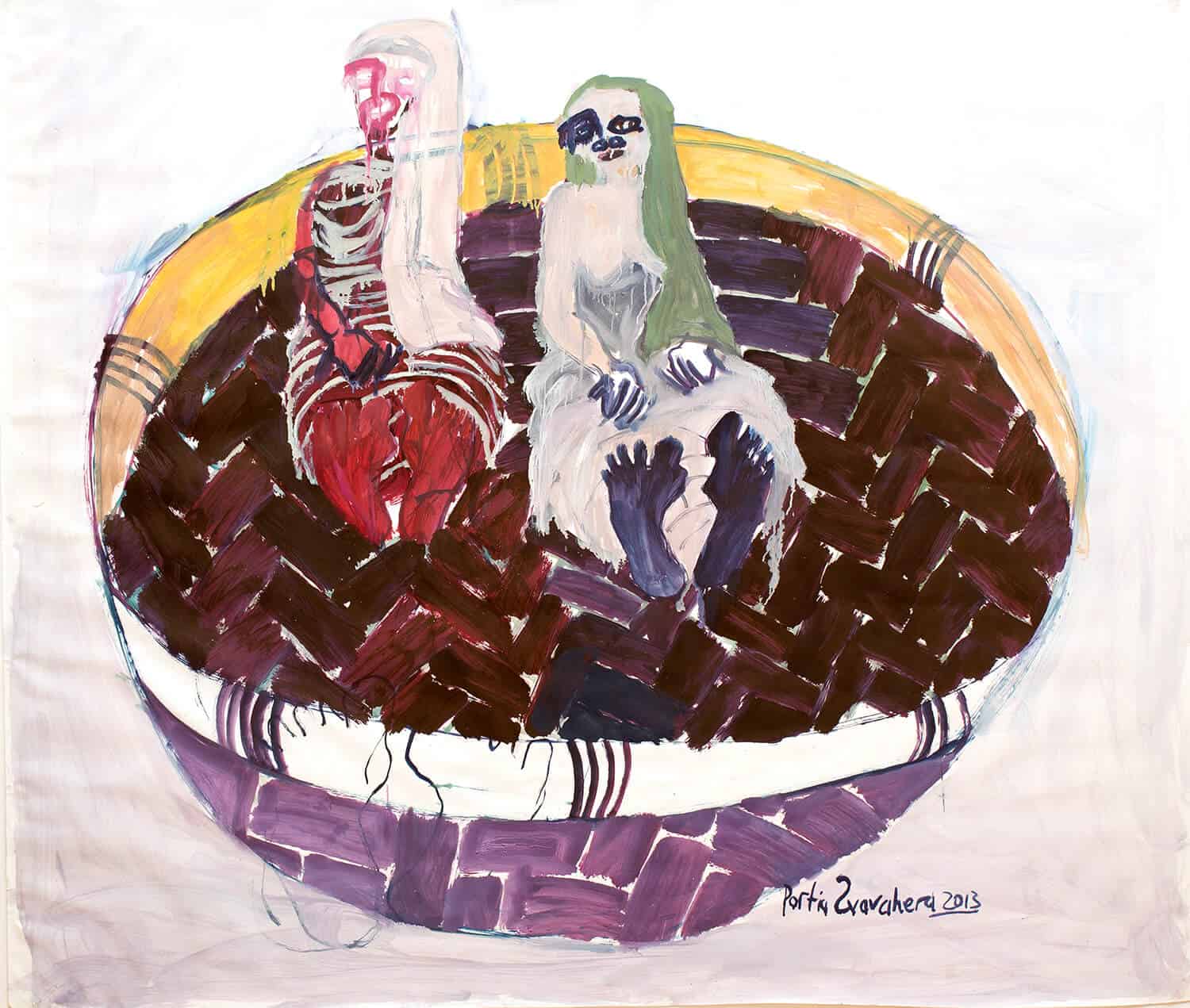 In Divine Water (2013), she chooses poise over provocation and composure over rage. Her rough brushwork, along with her figures’ gestural poses, ghostlike appearance, and expressive limbs, suggests that she abandons her paintings at the point of highest tension like an exorcist. She seems painted in feverish haste, right at the pinnacle of drama before it passes. Her meticulously detailed imaginary worlds, are simultaneously surreal and painfully familiar but yet free from the need to conform. These worlds are an escape. In the midst of it feels like the anger has dissipated. Cast out and we are renewed.

We see anger as self-realising energy, redemptive power and not a destructive disease. One can tap into a secret wellspring of creative impulse and urgency that is almost as old as art itself and find a resolution. So we cleanse ourselves, we organise, and we exorcise. Then we do it all over again.

Fadzai Veronica Muchemwa is a researcher, writer and curator from Harare, Zimbabwe. She is a founding member of Practice Theory Collective and is currently a Masters researcher in the Arts of Africa and Global Souths research programme in the Fine Art Department at Rhodes University.