Gonçalo Mabunda, The Owner of the New Looks, 2018. Soldering on obsolete militar metal, 60 x 60 x 15cm. Courtesy of the artist & This Is Not a White Cube.

ART AFRICA spoke to Gonçalo Mabunda, who was represented by Angolan gallery This Is Not A White Cube at ARCOlisboa this year. His sculptures are made from recovered armaments left behind in the aftermath of the Mozambican civil war and were displayed at the country’s national pavilion at this year’s Venice Biennale. The pieces evoke both African tradition and 20th century Modernism, many of them taking the form of ornate thrones that function as tribal expressions of power, commenting on what is gained and lost in conflict.

ART AFRICA: You are described as interested in the collective memory of your country, Mozambique. Could you elaborate on this?

Gonçalo Mabunda: My country went through a very bloody civil war that lasted 16 years. Following the peace agreements, the Christian Council of Mozambique, supported by the Mozambican government, created a project that involved transforming recovered weapons into art pieces. This was a way to make our people reflect on the history of the country. I got involved in this project. I always seek to ask: how can a poor country have so many weapons? I believe that the money spent on the purchase of weapons should be instead used for the development of the country.

Your sculptural work uses recovered armaments left behind in the aftermath of the Mozambican civil war. Could you comment on your use of these materials?

This was spurred on by the project initiated by the Christian Council of Mozambique in which they recovered many weapons from the war and selected ten artists to create pieces from the decommissioned weapons. At the time I had already been working with the medium of metal and so I accepted the invitation to be a part of the project. It was important for me to contribute to the cause and through this project, I began to exhibit in important international venues. 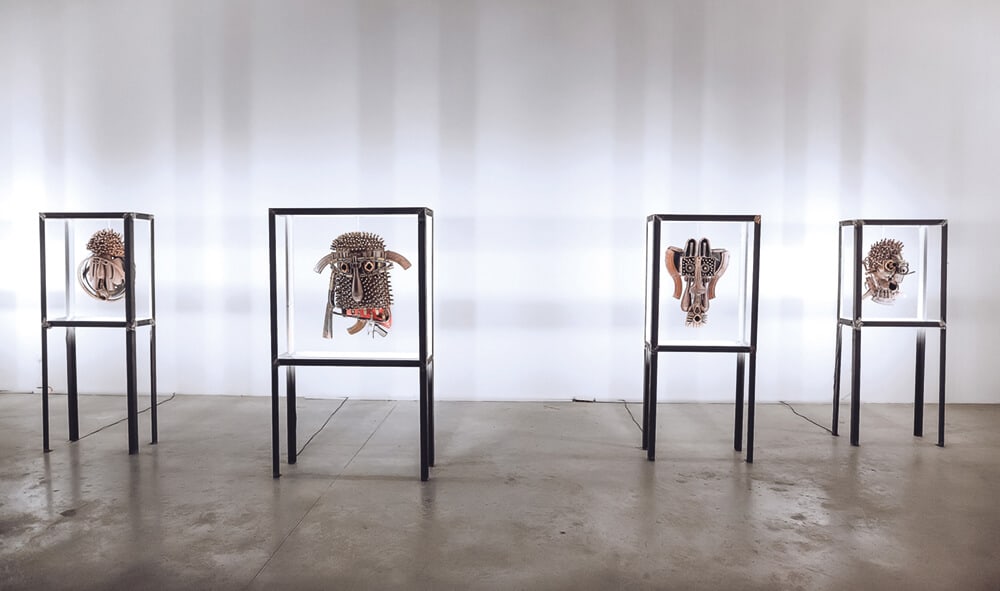 What influences inspire this practice of yours?

My influences are daily life: what I see around me in my country as well as outside of it. For instance, recently I have been exploring other scrap metals to compose my sculptures, namely, coloured metals. I do not paint the metals but use their natural colours. Through collecting these scrap metals, which I get from the scrap yard or from young guys selling them on the street, I try and rescue the unknowable story behind these materials.

Your work was represented by Angolan gallery This Is Not A White Cube at the fourth edition of ARCOlisboa, the Lisbon-based contemporary art fair, which had an inaugural “Africa in Focus” section for this year, featuring galleries and projects referring to the African continent’s artistic output. What does this effort to include the African continent in the fair represent to you?

I have participated in art fairs dedicated to African art in other countries for a long time. I did find it interesting that ARCOlisboa had an “African focus”; Africa is a continent with many possibilities.

Do you have any upcoming exhibitions in the works?

I was recently contacted to be a part of the Madrid Art Fair, but otherwise, I always participate in the London art fair and others. There is always an upcoming exhibition in different countries.