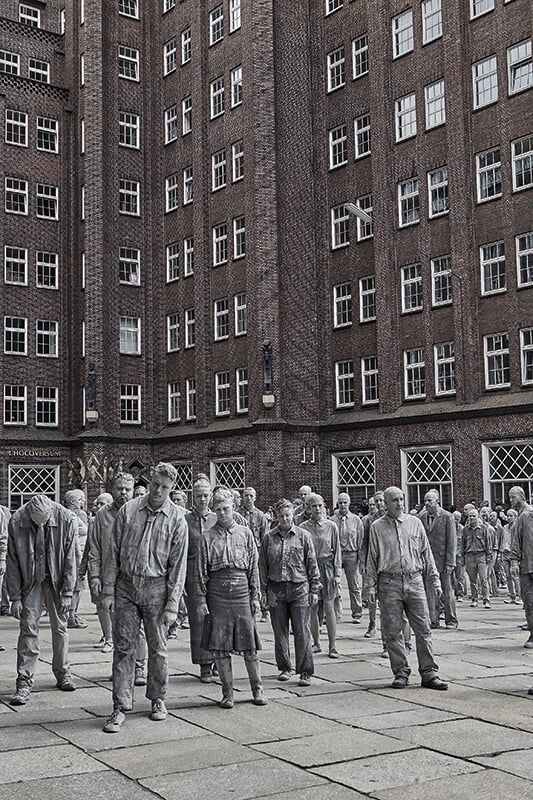 Image of the 1000 Gestalten protest against the G20 Summit that went ahead in Hamburg, Germany, 5th July, 2017. Photograph: Willem Thomsen. Image courtesy of 1000 Gestalten.

On July 5th 2017 over 100 grey-clad figures congregated in Buchardplatz, Hamburg. Members of the arts collective, 1000 Gestalten, entered the square from various quarters, their movements agonisingly slow, zombie-like, Butoh-esque. The group, which was realised in February 2017, proved a marked contrast to the protests that followed, protests which were violent, anarchic, bloody, and criminal. In this regard Angela Merkel, who hosted the G20 Summit on climate change and other global concerns, was absolutely correct in her damnation of the mayhem that ensued – the damage to public property, the looting.

Then again, how does one change a global order deemed centrist, monopolistic, exploitative? How, when caught in the grip of systemic human bondage, does one express one’s anger? In Violence, Slavoj Žižek blisteringly reveals the complicity of the State in the manufacture and maintenance of servitude. For ‘systemic violence’, notes Žižek, is built within the system; it cannot be contested without a reciprocal violence from without. ‘Objective violence’ – the violence of the State – deflects its withering force precisely by demonising any exterior threat to its ordinance. Which is why Žižek asks: “Couldn’t the entire history of humanity be seen as a growing normalisation of injustice, entailing the nameless and faceless suffering of millions?”

It is this nameless and faceless suffering which 1000 Gestalten embodied. Translated as ‘1000 Figures’, Gestalten is “an organised whole that is perceived as more than the sum of its parts.” As a mechanism, a body, it is intrinsically collective. If anonymity and abstraction is key to the performance it is because what drives these creepingly slow-moving grey-clad figures – bearing a ‘metallic clatter’ carried in ‘invisible boxes’ – is some aggravated static silence.

At the close of a two-hour performance, when all were gathered in Buchardplatz, a single human cry burst from the throng, followed by a rending – dusty grey clothing sloughed to reveal a glimmer of colour beneath – a rending repeated over and over by all amidst ululations and physical embraces, as one by one the hundred purged themselves of their bondage, the grey of the cobblestones beneath and the surrounding buildings allowing the sloughed grey clothing to further blur, and, thereby, amplify an emerging kaleidoscope of colour. Contracted movement gave way to freedom. 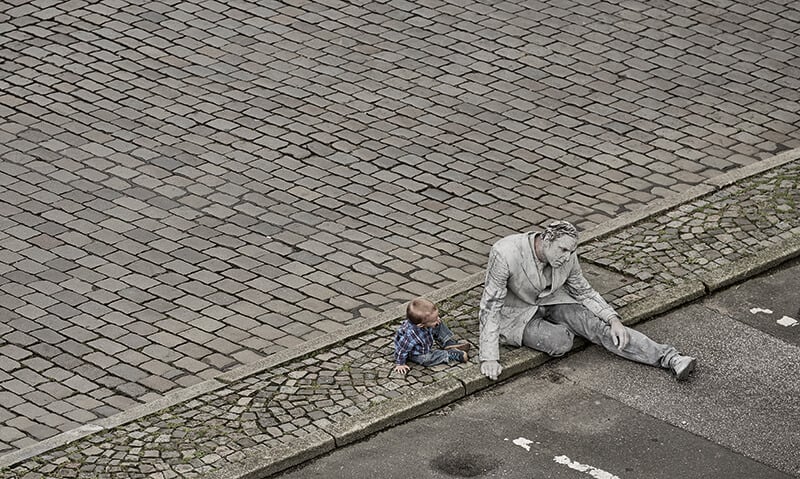 Image of the 1000 Gestalten protesters removing their ashened clothing in a demonstration against the G20 Summit that went ahead in Hamburg, Germany,5th July, 2017. Photograph: Christian Angl. Image courtesy of 1000 Gestalten.

“Couldn’t the entire history of humanity be seen as a growing normalisation of injustice, entailing the nameless and faceless suffering of millions?”

1000 Gestalten’s vision statement reads as follows: To “represent a society that has lost their feeling for the fact that a different way of life is possible. It’s not the financial news that determines our happiness but healthy relationships. Happiness is not defined over what we have, but who we are.” The socialist sentiment is all too familiar – and all too easily disparaged in an age grown increasingly sectarian, racist, and divisive. Theirs is a sentiment shared, say, by collectives such as Afrika Burn and Burning Man, temporary autonomous zones which light up the deserts of the Karoo and California. In this case, however, there is no ritualistic auto da fe, no symbolic immolation, but a will to enshrine joy as the fundamental pillar of human life. Against ‘rigidity and bleakness’ we have unbounded expression. For as 1000 Gestalten’s vision reaffirms: “Art only unfolds if a feeling is forwarded to a place where thoughts don’t get to, and this moment is the striking evidence.”

This moment being a global historic paralysis, a shoring up of privilege against a human majority, the ‘widening abyss’ as Pankaj Mishra points out, “of race, class, and education.” Mishra is also correct in stating that Reason – the twilit idol of the Enlightenment – can no longer explain the ‘doomed’ nature of our ‘current disorder’. Which is why violence is met by violence, why human connectivity is, increasingly, an inconsolable impossibility – and why, against this much-vaunted impossibility, we find the emergence of movements such as 1000 Gestalten.

The G20 Summit would inevitably harness a protest movement. It is not surprising, therefore, that that movement would bill itself as a WELCOME TO HELL. But then as the recently deceased activist against State control in China and Nobel Peace Laureate, Liu Xiaobo, reminds us, “If you want to enter hell, don’t complain of the dark, you can’t blame the world for being unfair if you start on the path of the rebel.”

Darkness is inescapable, but, as 1000 Gestalten reminds us, light too exists. For while violence defined the protests at the G20 Summit, what set 1000 Gestalten apart was its conscious refusal to incite fear. Rather, after Liu Xiaobo, they too realised that “Hatred can rot away at a person’s intelligence and conscience. Enemy mentality will poison the spirit of a nation, incite cruel mortal struggles, destroy a society’s tolerance and humanity and hinder a nation’s progress toward freedom and democracy.”

“If you want to enter hell, don’t complain of the dark, you can’t blame the world for being unfair if you start on the path of the rebel.”

Tragically, it is precisely this ‘enemy mentality’ that is tearing the earth apart. Despite 1000 Gestalten’s critique of somnambulism and ‘political apathy’, their call to “more political participation for a society where change doesn’t come from above, but from each and every individual,” the performance was met online by unbridled scorn from the Far Right. One troll – under the banner ‘Lady_Lbrty’ – declared that 1000 Gestalten’s global human vision threatened to ‘exterminate the whites’. “The left and their globalist plans must be stopped,” Lady_Lbrty resumed. Under the #AltRight and #Identitarian Europa, a ‘White unit’ needed to be secured – “We’ve a right to live, a right to our own homes, a right to our own identity, a right to preserve our culture and pass it on to our children. This is non-negotiable.”

This virulent nativism, after Pankaj Mishra, cannot be countered by reason. Yet another online troll, under the eerily Orwellian banner, ‘Truth Department’, is perturbed by “the eradication of national identities and cultures, the dumbing down of education, the indoctrination of our youngsters, the single currency, the single ruler, the single mind.” Their charge against 1000 Gestalten is precisely its call to unity. The question, however, is whether the dramatization of a zomboid collective consciousness and action supposes its furtherance. For as one of the organisers, Catalina Lopez, points out, “The goal of our performance today is to move the people in their hearts, to give them the motivation to get politically engaged again. We want to create an image, because we believe in the power of images…. We want to motivate people to take part. To free themselves from their crusted shells, to take part in the political process.” 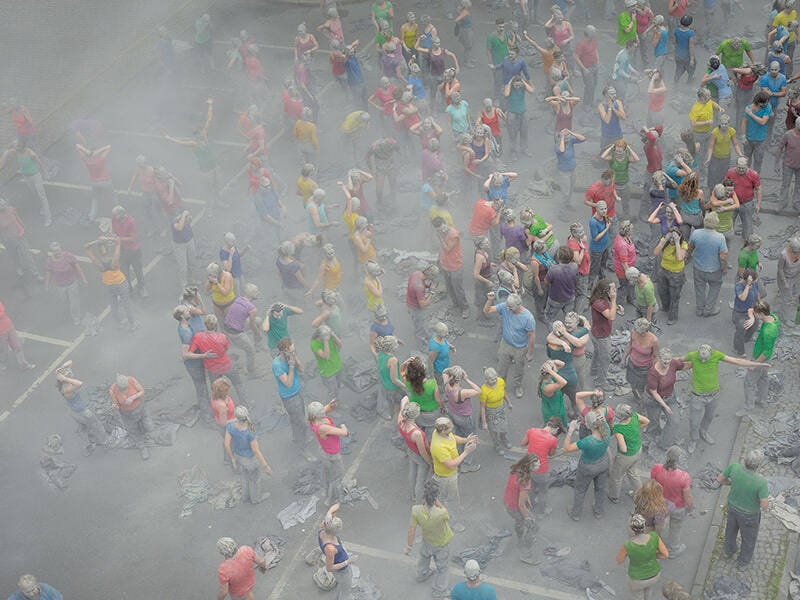 Image of the 1000 Gestalten protesters removing their ashened clothing in a demonstration against the G20 Summit that went ahead in Hamburg, Germany,5th July, 2017. Photograph: Christian Angl. Image courtesy of 1000 Gestalten.

The images, shot by Christian Angl, Andea Ruester and Willem Thompson, serve as an exquisite meditation on entrapment and the quest for liberty. Theirs is a vision echoed in the struggles of Liu Xiaobo and Ai Weiwei. To Germany’s great credit, under the chancellorship of Angela Merkel it is precisely this peaceful protest that is championed. That 1000 Gestalten has prompted scorn from the far right only underscores the threat that dogs liberty at every turn.

Whiteness is not exempt, Blackness no crucible. It is humanity that is in danger of losing its greater purpose in our corrosively divisive age. If as John Armstrong and Alain de Botton remind us that “sorrow is written into the contract of life,” then so is happiness. “We might be doomed … by an absence of hope,” they resume, which is why “we need tools that can preserve our hopeful dispositions.” In this regard 1000 Gestalten’s performance piece at the 2017 G20 summit is exemplary.

If “the values of the north have dominated the modern imagination; among these … rationality, science, the mind rather than the body, delayed gratification rather than the pleasures of the moment and the needs of the individual rather than the call of the collective,” then 1000 Gestalten have operated as a quiet-and-ululating bulwark. For as Armstrong and De Botton have similarly pointed out in their reassuring bromide, Art as Therapy, “The agenda for art in a liberal society would be to assist the individual soul in its search for consolation, self-understanding and fulfilment.… Artworks would look to commemorate, give hope, echo and dignify suffering, rebalance and guide, assist self-knowledge and communication, expand horizons and inspire appreciation.”

FEATURED IMAGE:  Image of the 1000 Gestalten protesters removing their ashened clothing in a demonstration against the G20 Summit that went ahead in Hamburg, Germany,5th July, 2017. Photograph: Christian Angl. Image courtesy of 1000 Gestalten.