What Can These Photographs Tell Us?

Photography from and about Africa is gaining interest and scholarship judging from the turn out at the one day symposium Distance and Desire: Encounters with the African Archive, held this past November, 2012 in New York. Organized by The Walther Collection, the symposium builds on their current three-part exhibition, by the same name, curated by Tamar Garb.

Launched in September 2012 and ongoing until May 2013, the exhibition series considers how the photographic archive has been used to construct and project ideas around Africa. The archive, in this context, is an expanding assemblage of representations, captured with the camera. The series as a whole includes work from different countries and the diaspora with an emphasis on South Africa. The symposium bridged the first installation Part I: Santu Mofokeng and A.M. Duggan-Cronin with the second Part II: Contemporary Reconfigurations as many of the works discussed and displayed overlapped. Some of these photographs are taken over a century apart. This time span alone reminds us that the questions we pose and the frames we elect to examine the past reflect the moment in which we act. Consequently, our involvement is in itself an archival process that generates new sources for future contemplation. But let’s return to the archives at hand, and consider a most articulate component. From official portraits of royalty in the late 19th century to private candid shots of and by everyday people in the 21th century, careful consideration of attire is informative. The clothes of the sitters invariably become indexical but what is omitted is equally revealing. The works in the first installation makes this point. 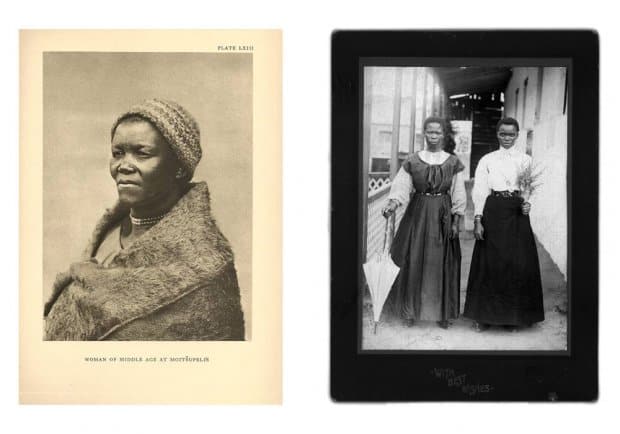 Motivated by a desire to capture a passing moment, the Irish-born Alfred Martin Duggan-Cronin compiled eleven volumes of photos and essays and called it The Bantu Tribes of South Africa (1928-1954). Many of his portraits adhere to standard compositional formats(profile, rigid frontality or the three-quarter-view) and sitters wear what he thought representative of disappearing cultures. In South African artist Santu Mofokeng’s 1997 compilation The Black Photo Album / Look at Me: 1890-1950 we meet black South Africans in self-commissioned photographs wearingWestern clothes, something the fastidious documentation of Duggin-Cronin excludes.These contrasting sartorial articulations are in part recognition of the power structures at play within ethnography. It is also a reminder that the process of selecting, arranging, and reconstructing is inherent in picture making. The air of objectivity afforded to early photography obscured this. But today, these images read as neither historical documents nor fine art — but as both. That Duggan-Cronin was part of a photographic salon and did not consider himself an ethnologist (but rather a preserver of history) helps explain the captivating quality of his images. And it is a reminder that biographical details can alter how we read a photograph. 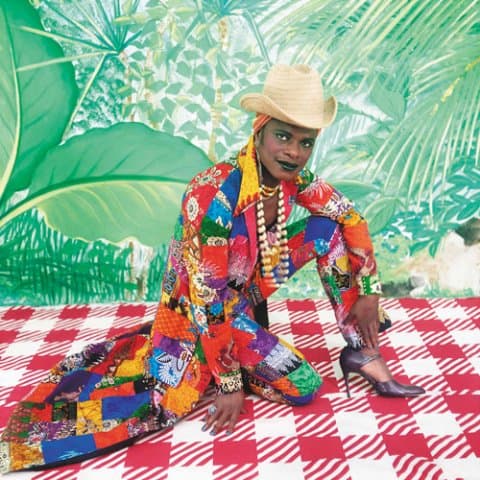 His traumatic childhood in Cameroon and Nigeria that included illness, separation, and civil war is not apparent in the photographs where he points the lens at himself. Nor do they demonstrate post-colonial excitement, such as could be said of Malian photographer Malick Sidibé portraits taken during the 1960s and early 70s, which at the time of Fosso’s images was already decades past.

In the absence of the traumatic personal past and troubling present (in which the photographs weretaken) the playfully choreographed aesthetic experimentation in self-fashioning instead reads as triumphant affirmation of the individual within a vibrant context of expressive culture in all its forms.

As the medium changed, usage and applications did as well. Precious light-impressions of early photography gave way to increasingly mechanised modes of reproduction; photographs became more affordable and thus more accessible to an increasingly larger audience. Post cards became early mass-transporter of visualised ideas, though few of the early versions were actually mailed, but instead traveled with the owners or were exchanged. The heyday of photo studios presented new liberties and creative spaces. The very act of being in a studio increases self-awareness and maybe we can think of the sitter-photographer dialogue as negotiation in self-presentation. The following chapter, brought on by the personal camera, created particularised collections. No longer was there a need to plan an outing for a photo shoot, but every day could be picture day. Compiled intofamily and private albums these photographs offered ways of documenting personal histories that did not necessarily square with (or consider) public pictorialised histories. Indeed, reference points for both photographer and audience multiply with the ubiquity and variety of the photographic medium. 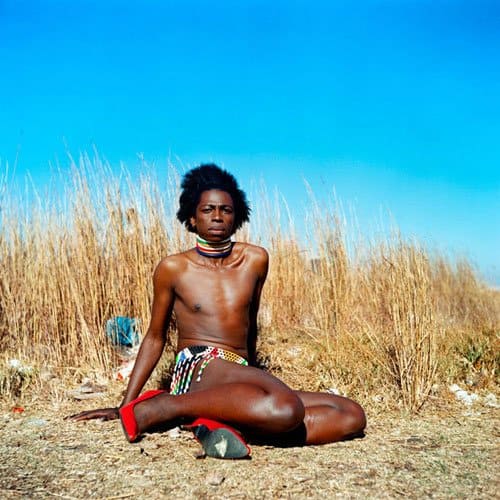 Zanele Muholi, Miss D’vine I, 2007. Courtesy of the Walther Collection.

For example, in Zanele Muholi’s Miss D’vine I we see traces of both studio and vernacularised forms of photography; we see landscape and portraiture; we see the body adorned (beaded accessories and redpumps) but also the absence of clothing. To return to a point raised earlier, we see the inescapable process of selection, incremental fine-tuning and experimentation towards communicating ideas, documenting subjective notions of self (and group) that draw from a vastarchive–some of which is pictorial. And we see much more because of the many reference points (on both sides of the picture). When it comes in such varied forms and contexts: what can a photograph tell us? What are we willing and capable of discerning from it? What do we elect to focus on? The answers surely depend on when and where these questions are asked and by whom. What came across from listening to the symposium speakers is that they were not offering answers but perspectives from a specific place within the time-space continuum. Perspectives that suggest that the ways in which we engage with images of the past reveal something about the present. Undoubtedly, this engagement, whether pictorial or textual, becomes a record of ourtime just like the source photographs are specific, and therefore incomplete, records of another time.


Collection in collaboration with New York University and UniversityCollege London. A selection of presented papers with additional contributors is planned in book form for summer 2013 when an expanded version of Distance and Desire (with more works by currently included artists as well as additional artists) will go on view at The Walther Collection space in Germany.All images courtesy of artists and The Walther Collection. All rights reserved.